I remember a time in gaming when PC exclusives were a thing. But nowadays, due to the impressive power, and massive commercial success of console gaming now, these are a thing of the past. I feel Bright Memory Infinite would have made a great PC exclusive and solid reason to upgrade your rig to be able to run it and the infamous CPU melting Crysis. But Bright Memory Infinite also symbolises something more important about gaming, and that is how one person can make their own AAA-inspired shooter that looks amazing.

But do looks make the game? Can the lighting-fast action, sleek visuals, and insane set pieces inspire other novice game designers? And more importantly, does Bright Memory Infinite compete with the giants of the industry such as Call of Duty?

Read on and see.


What is Bright Memory Infinite?

Bright Memory Infinite is the main game from FYQD Studio, which brought out the prologue “Bright Memory” in 2020 (an Xbox Series X/S launch title) as a sort of teaser for this one-person studio could achieve. Giving us “lightning-fast” action with a mixture of swordplay, gunplay and beautiful spectacles with breath-taking action set pieces. Infinite is showing that with a very small team and resources, anyone can create the next Call of Duty on steroids.

Taking place in the year 2036, players will take on the role of Shelia, a sort of Black Ops operative who works for the Science Research Organization (SRO) when trouble is brewing with the world. Shelia is called upon when a bizarre phenomenon occurs with no explanation and could cause the end of times. A Blackhole has appeared in the skies and it’s up to Shelia and the SRO with their agents to investigate and stop this phenomenon from causing total devastation.

As Shelia embarks on his mission, she soon realises that all is not right and even time itself is being torn apart as strange warriors from another time appear, mystical beings appear, and the end of days checklist is being ticked off with rain, thunder, and Earth-shattering quakes becoming more frequent and dangerous.

While this is a visually staggering game with some intensely fun brutality, Bright Memory Infinite’s story does take a back seat overall.

While it’s nothing bad at all, it’s just very “paint by numbers” with the end-of-world event occurring, our lone hero having to save the day and having the support of a gruff and huff commander who has some of the bluntest and direct back and forth with our leading lady.

The number of times I heard the commander over our radio say “Shelia!!” followed by simple instructions or exposition, with Shelia replying with “Roger!”, cracked me up. It felt like it wanted to be Metal Gear Solid, yet didn’t have the meaningful subject matter to discuss, or the veteran voice acting with the likes of David Hayter.

The plot is simple yet serviceable, with not much character development, twists and turns or love triangles to speak of. But there are some epic set pieces and moments featuring time travel which I thought were cool, if not a little random.

Now considering your stance as a gamer, this is either great or not so great. Personally, I didn’t mind so much as the game itself is filled with so much action and spectacle that weighting it down with long dialogue exchanges or pointless twists would have ruined the flow and enjoyment.

But I would have liked a little more depth in either the characters or lore. Reading up on documents about the event, why it was bringing elements from other time periods along to the current year, and who the hell certain mythical warriors were might have been good to read up on. When certain characters do pop up with no explanation, rhythm or reason just adds confusion and little investment.

It would have also been a little more joyful to see our leading lady Shelia have a little more personality as well. She does seem confident and powerful but acts nothing more than a badass pretty face throughout the venture. 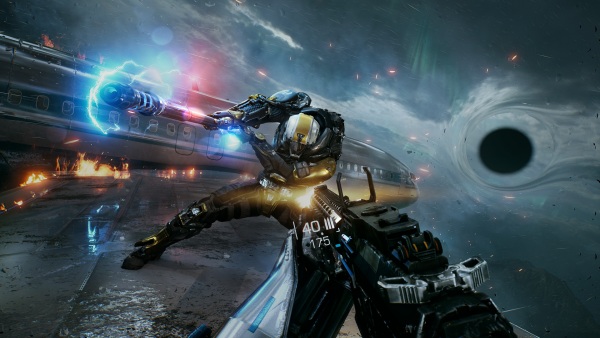 Bright Memory Infinite indeed makes up for the lack of story with an overload of sweet, sweet action. Combing gunplay and swordplay, with lighting fast movement, and over-the-top action that would make Michael Bay blush a little is the main substance of the gameplay. Shelia is tasked with venturing from point A to point B in pretty much every level, but must deal with an abundance of armed troopers, heavy units, mythical beasts, ancient warriors, and boars …..

What Bright Memory: Infinite excels at is combining tight and intense FPS gunplay with its speedy sword antics, which are filled to the brim with special skills, combos, and alternative ammo types that make bigger bangs.

Arenas are tightly woven to allow players to flex their abilities and take on multiple enemies in the most spectacular ways possible, with massive combos and special attacks. Land devastating heavy strikes with your sword, or unload a full clip of explosive, fire-spewing shotgun rounds onto a group of enemies. All the different special attacks, ammo types, and maneuvers felt like they have purpose and are a lot of fun to carry out whether fighting an arena full of foes or during one of the massive boss battles.

Combat is fast, swordplay is very responsive, and is layered to include counters, and special moves, and combining this with gunplay makes it feel like high octane death of death which is both messy and tactical. If that make sense? (Which is all good fun of course).

Shelia can also learn new abilities making her even more dangerous, by picking up Jade Dragon statues (a bit like Tomb Raider 2…. Hmmm I can see some similarities).

The best way to describe Bright Memory Infinite is basically it plays out like a game from the early 2010s, in all the best possible ways. A refined, high-octane action game, focusing on combat in tight spaces, featuring cool and creative set pieces (for the most part), big boss battles, and really smooth and satisfying sword/gunplay. Kind of like Shadow Warrior, with wholesome, tight;y woven action gameplay with some crazy awesome sword-wielding lead.


If a game was directed by Michael Bay … but it was good! 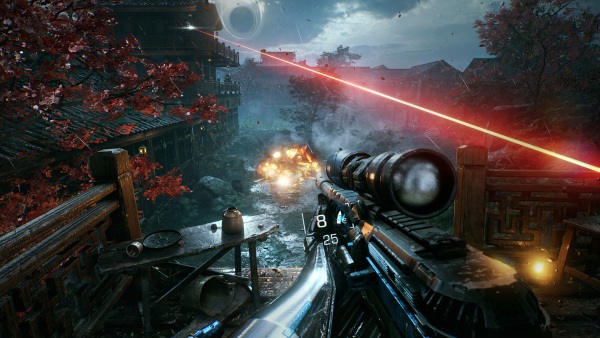 What this first-person hack and slash do right is keep everything consistent, with a nice flow and sense of progression. The action is fast, engaging, and easy to grasp. The weapons and new skills acquired come at the right moments throughout the campaign and are made the most out of even in a short amount of time.

As previously mentioned, the game is stunning to look at, and while the voice work is a little underwhelming, everything including the sound design is really on point. While the campaign repeats many of the same environments, with an endless venture through floated fishing villages, ancient temples, and rocky passes, the aesthetics are quite impressive, making up for this repetition.

with a mighty storm beating down on the world around you, the rain, wind, and lighting really add a layer of intensity and threat to your situation. All these elements combined make Bright Memory Infinite one of the best-looking games on the market hands down.

While the action could be viewed as basic at times, with generic AI to fight off and a typical roster of guns to play with, Bright Memory does spice things up with an epic fight on the wing of airplane mid-air, intense boss battles, some good set pieces, and decently designed arenas where you’ll be switching tactics and weapons quite often. Keeping things fresh and entertaining.

The gun and swordplay have an impact, with enemy ragdolls and explosive blasts from your guns making everything feel like an epic, high-budget John Woo film. You can of course expand your range of skills to become even more devastating, allowing Shelia to become even more powerful and open a line of impressive and fun attacks.

You’ll be able to launch enemies into the air and finish them off as they float in a frozen state, or blast several shrapnel shells into a heavy enemy, before launching a dozen sword swipes from across the room. Shelia can also use her suit to push back enemies to give you some breathing space or land an immense punch forward that will cause insane damage. Plus, there’s a lasso ability which is great for getting up close and personal or just buying yourself some time but incapacitating the odd enemy here and there.

What I’m getting at is to say while Bright Memory Infinite might not do anything new or original, it does execute some impressive and fun combat mechanics with end results that are engaging and extremely entertaining.


One person can only do so much right!


While there is plenty of action and spectacle, this is not a very long game, totaling at most 3 hours if you take your time. Not so much a problem as the price reflects the length and what you get is some of the best high-octane action out this year. But I wished there was more unlockable content, such as modes, filters, and cheats to lengthen the overall experience and add more replay-ability. You can replay the campaign again in a New Game + mode, where all your skills and weapons carry over, which is great. And with the latest patch, you have all costumes unlocked from the get-go. But other than that, there is not much else. This is really a shame as the total length is quite short. Originally (in my last review) my playtime with Bright Memory Infinite was around 5 hours or so. This time, I finished it in just over two… These were still a fun couple of hours, but this is something you can finish in a couple of sittings.

While there are plenty of high-octane moments littered throughout the campaign, there were also some rather baffling ones too. Playing this again did not warm me up to the forced stealth segment which felt generally underdeveloped, tedious, and overall pointless.

There is another random moment where you have to survive a hoard of charging wild boars in a field, and while it did feel completely offbeat, I didn’t mind it in comparison to the stealth section. Maybe though there could have been a giant pig, considering some of the crazy stuff you do in this game, a giant monster pig could’ve been implemented.

Lastly, I felt the game needed more compelling secrets, as the tokens to upgrade your weapons and skills are ridiculously easy to find …. They’re often pointed out in plain sight for you. Having some hidden behind breakable walls would have been more interesting than where they are placed in the game.