Over the last decade, we’ve seen the resurgence of many classic genres and gaming styles, especially when it comes to FPSs. The likes of Dusk, Graven, and the upcoming Agent 64, all have been inspired by games from the ’90s. Yet as time moves on, so do the inspirations, and now we’re seeing new games inspired by those from the early 2000s. Today’s review is for a game that is clearly influenced by the mighty Half-Life 2, with a dystopian setting, simple yet engaging gunplay, and lateral elements which revolve around physics and other elements. Industria is a love letter to a simpler time of gaming, but is it a love letter you should check out? 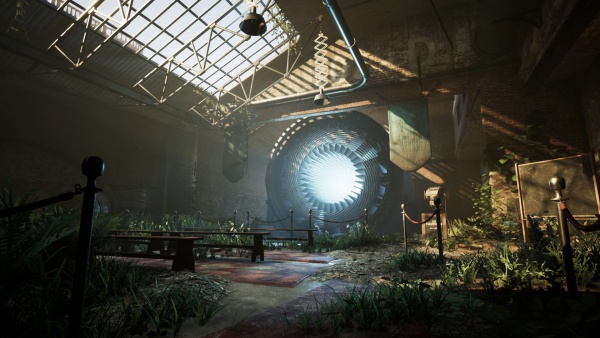 Industria is a first-person shooter that centers on a young woman, Nora, who finds herself trapped within a different version of Earth. After a massive event at a scientific complex in Berlin, Nora is teleported to a strange version of Earth, where machines have taken over and humanity lies in ruin. All of this occurred after Nora’s partner William, decided to venture forth using a highly dangerous experiment involving parallel dimensions.

With only her wits, cunning, a handful of weapons, and the aid of a man named Brent, who appears to be the second only living being in the city of Hakavik, Nora must search for William who ventured through to this place before her. However, Brent informs her the only other person to arrive in Hakavik before her was 20 years ago. Is she too late? Can Nora find William and discover what happened in this parallel version of Earth?


A story spanning across time and space 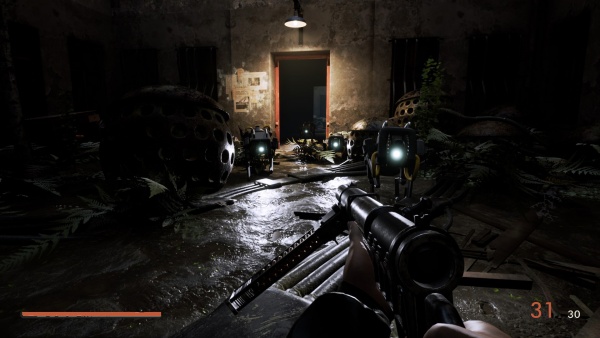 What I felt Industria did well was create a compelling narrative with the main character I liked playing as (with a good voice actor behind them). Nora’s journey to find the man she loves through another dimension was a deeply captivating one, and her goal kept me invested until the very (and rather rushed) ending. There are a bunch of interesting concepts and themes to flesh out a story which would have been fine, but rather uninspired. Still, I was totally invested from start to finish, with a great starting point of an experiment going hay-wire in East Berlin, to Nora finding herself in a strange yet familiar place, and the mystery surrounding William and the world of Hakavik.

Industria is not a very long game (and more on that later), but I felt it did what it needed to do in a short amount of time. There are plenty of notes scattered around which add more layer to the world and Nora’s interactions with Brent (while limited) did indeed have some gravitas.
There are some neat bits of environmental storytelling, which only furthered my curiosity and overall, made me want to see more.

The big problem with Industria is its length, and while I have no problem with a short yet memorable game, there were two main problems here. First, the game wraps up at what you might feel is the halfway point. There are 5 chapters in total and by the end of chapter 3, you can see the game begins to conclude the story, with the last two chapters lasting no more than 10 minutes combined. The end is just a walk through one area and a heavily rushed outro lasting only a couple of minutes, which overall raised more questions. Second, Industria felt as though there was more content to see, explore and play with. Or that certain areas were massively reduced in scale. Brent would describe certain areas, building them up as incredibly dangerous and a real challenge to get through. But then only resemble a hop and a skip across a small area which poses little or no threat. It’s very clear that the developers had more planned, yet had to reduce or cut certain points, and nowhere is this felt than the end.

The overall length is around 4 to 5 hours, but the last 20 minutes really are a kicker. The first couple of hours is great, with plenty of interesting world-building, and a strong mystery. But the last part I can sum up as “Right, we have no budget left or time, so let’s get this wrapped up!”. And I don’t mean to make this sound unprofessional, as I know game design is hard and for a team of fewer than 10 people working on this, they did a really good job for the most part. But Industria is more like Industria: Episode One and just the tip of the iceberg, that made me want more and left me very unsatisfied with its rush ending.


Similar, yet strange and new 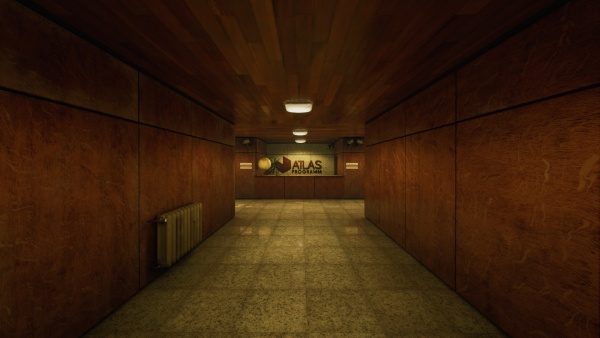 Industria does give off some heavy Half-Life 2 vibes, and it’s so welcome. The basic mechanics and goals are incredibly simple, with Nora having to move through various dystopian environments, finding clues to what happened in Hakavik, where William is, and fighting off killer robots that lust for your blood. There is a thick air of mystery, with (for the most part) a gorgeous world to explore litter with fine detail and excellent environmental story-telling. Nora will have to fend for life with an arrangement of trusty firearms, as there are plenty of crazed machines which see her as a threat in their world. The shooting is simple, but there is a variety of enemies, and the firearms feel as though they pack a punch when blasting robots to bits.

Hakavik is an incredibly haunting place, with many empty homes, overgrown city streets, and the remaining fragments of society making a desperate last escape. Venturing through the many decaying and vacant building sent chills down my spine, as it was often a tense close call with death. Wondering through the many enclosed areas where light is absent were some of the most unnerving times, I had in my recent video game memory. Even armed to the teeth, I was still shaken by the slightest mechanical sounds in the distance and had to watch the battery in my flash, making sure it didn’t reach zero.

Industria has the feel of a Source engine game but in some of the best possible ways. While the design and gameplay mechanics are often quite simple, the world-building, and atmosphere are absolutely staggering. The gunplay is nothing spectacular, but it’s beyond servable and rather enjoyable due to the placement of enemies, and the number of set pieces and small encounters that ramp up the intensity. There are also some great survival elements, where Nora will need to scavenge for ammo and health to survive. Hakavik has many secrets and plenty of places to explore for loot and vital gear, adding to the intensity and generally making my survival much more compelling than other survival games I played.

Puzzles vary in complexity and enjoyment, as there is a range of different problems to solve. There are classic combination puzzles, where Nora will need to mix something to gain access to an area, such as a rust remover formula to make a lever operational again. But there are also those in-game physics, which are a clear nod to the likes of Half-Life 2 … and these are not very good (not bad, but just uninspired in execution). The physics for carrying items are decent (aside from bigger items blocking your view), but how they're utilised in-game usually revolves around solving the same problems. This is either to move an object blocking your path or to put together a few boxes to create a makeshift staircase to an exit. It’s not very interesting and after the third or fourth time doing this, I found it tedious. Half-Life 2 did have some very basic problem-solving around its use of physics for sure, but there was a nice variety to the problems. Plus there were moments when you needed to cross dangerous areas using items around you, elevate a gate mechanism underwater with barrels filled with air, and so forth.

If you removed the physics from Industria, it wouldn’t really matter at all. But there were still some neat moments and set pieces, including one where I had to rush to pull several levers to access an elevator, as a horde of machines slowly engulfed the area, I was in.
Overall, I really loved exploring the world of Industria and wished there was more to explore…. But as mentioned before, the ending did not leave the best lasting impression.

A Bleak and beautiful version of the future 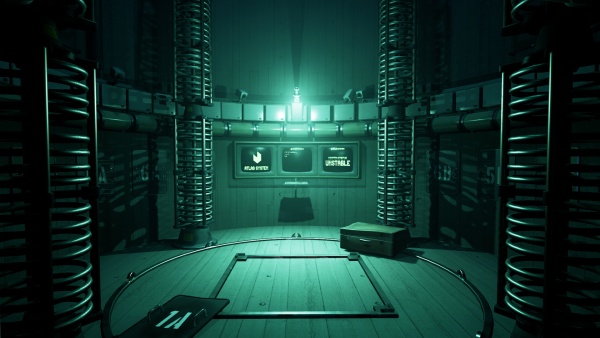 As mentioned before, Industria does have the feel of a Source engine game. Where the world design and the various elements in it are straightforward and simple, yet the art style and amount of detail really do perk up the overall feel of the game.
There is a lot of attention to detail within the city of Hakavik, as it’s overgrown and overrun but various elements of the machines, including massive cables which run along over buildings and city streets. The atmosphere is beautifully somber and haunting, with much of the world ruined, utter silence and the few hints of music really add another layer to grandeur. The machines/enemies have some awesome designs, each type with their own look and animations, with some of them being genuinely creepy and threatening. All these elements do indeed make Industria feel like a highly refined, high-level indie game at times.

But then we get moments which like the end, feel rushed and unfinished. In the open areas toward the end, we see a "lackluster" (or again rushed) effort, as the last few environments look flat, unpolished, and undetailed at times. I noticed even in the first half of the game, there were some areas that felt strangely empty and lacked any decor or basic items scattered around. There were also some minor problems with the optimisation, especially when in certain interior areas where turning your character with higher sensitivity will reveal the world clipping at the edge of the screen. This and the frame rate drops made exploring the more beautiful areas a little disheartening.
And especially considering this was playing on an Xbox Series S, I was even more disappointing.

Industria is an odd one, because there is clearly an amazing game here, and one which is developed by passionate and creative developers. But the flaws really hold it back from achieving greatness. I love the world of Industria, it's a compelling narrative and interesting themes, along with the simple yet fun gunplay. I found myself thrilled at every step I took in the world, even the moments where I was utterly unnerved at the enclosed and dark spaces where I could meet an untimely end. And I really liked Nora and her venture to save the man she loves. But the unrefined physics, lack of polish in certain areas, and the extremely lack-luster end do hold back what is otherwise good.

I feel this is only part one of the full game the developers have in mind. And while these shortcomings do let Industria down, I am genuinely intrigued to see where the next part of Nora’s adventure takes us.

As mentioned before, game design is hard, and the team clearly had to cut down on their intended vision for the final product. But these guys have done a cracking job otherwise and clearly have talent. Which is why I really hope we get Industria 2 soon.

An Xbox Series code of Industria was provided by the publisher for the purpose of this review.