There are many games out there that take heavy influence from others in a bid to secure high esteem, a major following, and potentially an easy ride to glory off nostalgia. It sometimes works, other times it doesn’t. But the difference is heavily defined by how well made the final product is. Dishonored is clearly inspired by the likes of Thief in so many ways but makes itself more than just a carbon copy and thus is the reason it’s highly renowned. More so than the flop that was the 2014 revival of Thief.  Our review today is on Winter Ember, a game that takes inspiration from many places, and combines them into a game that’s confident in its leap of faith, but does it have the grace for a grand landing?


What is Winter Ember? 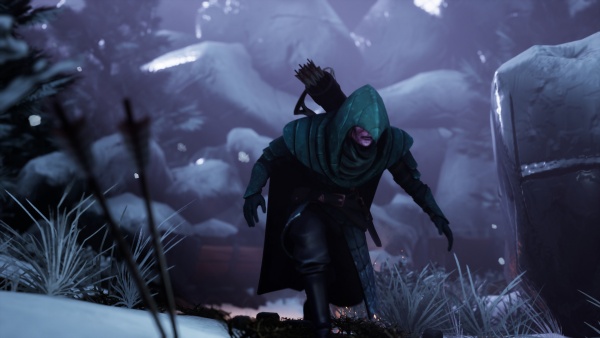 Winter Ember is an immersive stealth action game and often resembles a loving homage to the Thief series. Casting players into the shoes of Arthur Artorias, a young and affluent young man who sadly becomes the sole survivor of a massacre that has wiped out his entire family. Thought to be, Arthur manages to escape with the help of a young woman and is taken to safety. After 8 long and grueling years, Arthur emerges from exile 8 ready to find those who wronged him.

Seeking revenge and guided by his lust for blood, Arthur will sleuth through the shadows, slit the throats of those who wronged him and become known to his enemies as The Faceless Man. However, he will have to deal with an ominous militant religion that is rightfully keen on keeping control of the city and on a grander scale.

Arthur’s path to vengeance will see him sneaking through the shadows, gathering resources and valuables to help him obtain useful gear, and potentially knocking out, silently killing those in his path or misleading them away from where he needs to be. He will use his environments to his advantage and the tools of the trade to keep himself hidden and extinguish his most mortal enemy, sources of light! 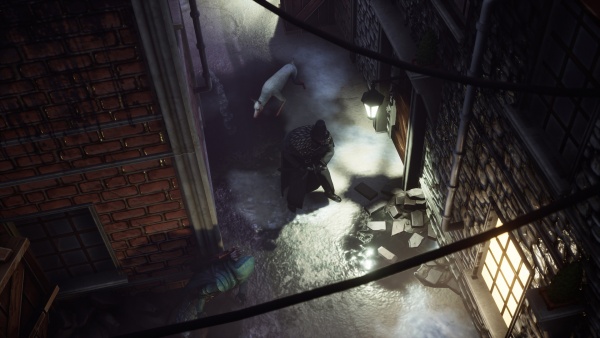 Winter Ember is a tale that’s very typical of the genre and many others. The general beats of the plot are predictable for most of the journey and Arthur himself feels just as predictable. There are some rather compelling twists in the narrative, especially in the latter half when things get a little more extreme in places. But what really shines through are the hand-drawn animated cutscenes which really do look and sound beautiful.

Generally, the story is somewhat decent, with some low moments, quite a bit of melodrama, and questions being raised. But there are the more personal, darker, and grittier aspects that just about kept me interested until the end.


What Winter Ember nails in its visual presentation are creating a foreboding and bleak atmosphere where the world feels cold, isolated, and decedent. The general feel while venturing through the world is one of loneliness, despite never being a few feet away from a patrolling guard, yet the environment conveys a nice chill through your bones. The gothic style with some steampunk elements is at times, very beautifully crafted if not wholly original. I would say that being out in the cold, with the snow beating down on Arthur as he snuck around really did put in place what a harsh and brutal world this is for him.

I would say a few things let down the immersive and rather stunning world, including some clunky character animations, and while some areas are magnificently designed and unique, much of the world feels repeated. You’ll see the same interiors, the same looking creates littered throughout the world and the general look runs throughout the many sectors of the world.

A big component of stealth games is typically the sound design and music, which Winter Ember does an okay job at. The music is nice, if not a little generic, but music is lacking in certain key scenes leaving them to feel somewhat hollow. The sound design lacks any real impact or clarity, with most of it largely muted, but not in a way you would expect for a stealth game. For great world-building and even to make the world feel organic, small sound drops do accomplish this, but Winter Ember lacks any environmental sounds, or those small touches to make the world feel alive. I also felt the repeated lines of dialogue from enemies did also get somewhat tedious.

It is a shame to see the small things such as this add up and work against what could be a rather breath-taking setting, be it one that feels too familiar with a particular stealth masterpiece starring a certain “Thief”.


Sleuthing and slaying in the shadows 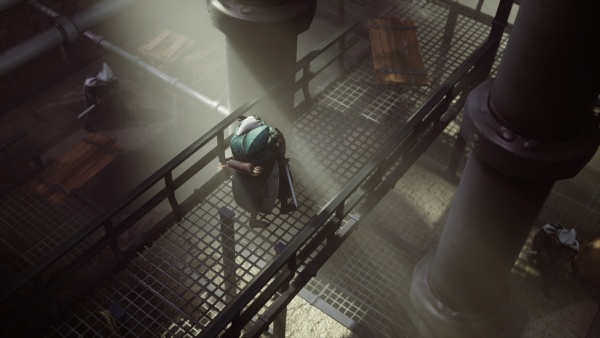 Winter Ember describes itself as a stealth/action game (this is never a great combo personally, nor the best words to put together in your Steam page description), where players will use the environment to hide in plain sight and take every advantage, they can to overcome the problem at hand. Playing as Arthur, you’ll be sneaking through a multitude of environments, sleuthing through thick, black shadows, quietly disposing of patrolling guards as you see fit, and making sure you can grab as much loot as possible. There will be hidden passageways, safes to crack, pockets to pick, and light sources to extinguish with your trusty water arrows.

The framework to Winter Ember will see players venture through a semi-open world location and a mixture of more linear missions where you must complete various objectives in a way you see fit. Arthur will have to adapt, learn new skills, use a range of tools and his own instincts to avoid detection as best he can, or adapt to a situation as it changes rapidly.

There is plenty of sneaking around to do as you explore the environment for hidden paths, values, and items of interest. Staying in the shadows is highly recommended (mostly due to the clumsy combat) and here you can see the stealth mechanics are refined enough to be consistent and enjoyable. I love stealth games, and being able to avoid detection, steal loot and silently take out my enemies can be absolutely thrilling. Winter Ember does a good job with its stealth, which is simple yet effective in creating some good tension along with high risk/rewards factors. 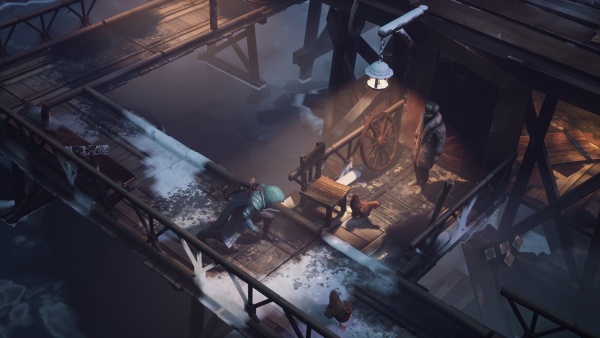 Arthur will be able to peek through keyholes, hide in the shadows and pickpocket an unsuspecting guard. The early stages of the game can be a little brutal, as you’re very limited on even the basic skills. So, you will have to be extremely patient and highly observant, not to cause attention to yourself. Even your vison-cone while peeking through keyholes and windows has a small area of coverage, along with a lack of some handy skills which are the baseline for other stealth games. But after the first couple of hours, you’ll be obtaining enough experience points to take advantage of the environment and your enemies.

Players will also be able to craft useful items, such as the previously mentioned water arrow, but also rope and blunt head arrows allowing them to gain access to hard-to-reach places or disguise their path which might have a few guards in the way. There are also a couple of other interesting arrows, such as the electric arrows, that can disrupt generators, causing a total blackout in a nearby area. All these arrows have a sense of purpose and often, there will be times you need to use them or allow a choice in how to make your next move. I would have liked a few more arrows, to expand upon the stealth tactics, but sadly what it is missing is general gear. When in combat or running away, there is nothing here to help you out. Being able to make a quick escape would have been great and it’s just so weird to be a Thief, without some essential quick escape tools.

Again, it’s all simple and things we’ve seen before, but the developers have done enough to make it refined and have more depth than some other supposed stealth games on the market.

There are some enriching gameplay elements with the sleuthing, evading, and looting, and the odd puzzle, key hunting, and stealth-focused set-piece really do shine from time to time. The city/central area between missions is really engaging to explore and offers some neat side quests and optional rewards that will see Arthur becoming a better silent avenger.


A stumbling thief through the shadows 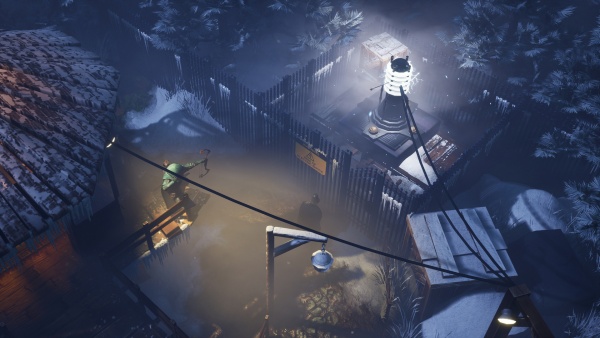 Now what sadly puts down Winter Ember in many ways is the clunky combat and uninspired level design at times.

Firstly, I feel the combat should have been somewhat re-tweaked or just removed entirely. The face-to-face moments with enemies are bloated, and dull resulting in awkward counterattacks, constant detriments such as blood loss, and enemies usually being a little too powerful, especially when faced against a group of them. This is where I state again that the lack of certain tools to allow for a quick escape is sorely missed. Especially when guards giving chase never give up and are perfectly matched at your speed.

But the biggest disappointment is the lack of interesting level dynamics and mission objectives. In my preview, I mentioned a train level that takes place early in the game, and it does not utilise the environmental aspects to make engaging gameplay. There are quite a times when I found myself saying “wow, it would be so cool if there was this happening” and often enough, I saw missed opportunities. The train level is a prime example and while games like Thief didn’t have the most spectacular level design at every level, there were interesting objectives, backstories, and the occasional mission that was so memorable that they’re still spoken about to this very day.

The general level design is nice, with plenty of interloping paths, hidden passages, secret entrances, advantage points, and more to spice things up. But the core of the levels and the lack of compelling dynamics which make use of the environment’s setting (i.e., a train level where you just go through each carriage and only once hang off the side to evade a single enemy), does put Winter Ember at a disadvantage in the genre.

Just to touch on general performance, while playing this on an Xbox Series X, Winter Ember did a well enough job with smoothness and a steady framerate. But taking this for a stroll on an Xbox One will result in a drop or lower than expected framerate overall. Even at times, being quite sluggish in the larger areas.

I feel Winter Ember so desperately wanted to join the elites of the genre, but throws in so many different ideas, without any truly unique dynamics that end up making it feel somewhat generic sadly. I still believe it’s worth checking out, as there are some cool elements worth experiencing. The hand-drawn cutscenes are wonderful, the world is visually bitter and beautiful while mostly fun to explore, and the stealth mechanics are solid. But Winter Ember needs a distinct identity, and more innovation in certain areas such as engaging mission objectives and dynamic level design elements. Improved on enemy AI and combat overall. But most important, it should not have played it safe and in the shadows of other, greater stealth games.

But if you’re in need of a stealth fix, then Winter Ember will do the job.


An Xbox review code of Winter Ember was kindly provided by the publisher for this review.