Do you ever just fancy chilling out while playing a game? Embarking on an experience that’s challenging and creative, yet does not punish you for making a mistake or embracing the learning curve? There are many more games coming out which fit this bill, such as the recent Unpacking and Cloud Gardens. Airborne Kingdom is setting its sails as another mellow and enriching gaming venture that rewards you through interesting and dynamic problem solving, which doesn’t result in a respawn after a sneaking enemy grenade.


What is Airborne Kingdom? 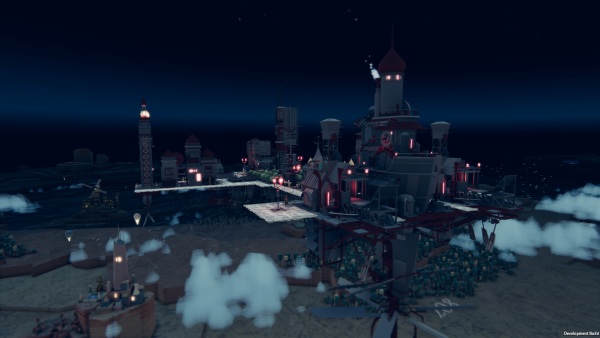 Airborne Kingdom is about bringing people together in a long-forgotten land, via a beacon of hope in the shape of a floating city. This is what you may class as a city builder, one which is incredibly beautiful and offers a different type of challenge. While many other city builders unload a great deal of stress and responsibilities onto players, Airborne takes a more chilled approach to the goal at hand. Players will build their own utopia in the sky, much like a more pleasant version of Bio-Shock Infinite Columbia.

It’s a city-builder with a relaxed attitude as you won’t be dealing with planning permissions, water rates, tax rises to pay for council projects, and Godzilla attacking from the ocean (I recall this was a thing in very old SimCity for the SNES). And there are no natural disasters or competing cities to fear of. But you will indeed face some challenges while building your dream floating kingdom.

The main challenge while building your ever-growing sky Utopia is the weight. Adding to and expanding your city will of course add more weight to the platform that’s upholding your city in the sky and it can be rather delicate. Making sure the city is not heavy is a key factor to success and peace, as losing the equilibrium for the platform will result in disastrous results. 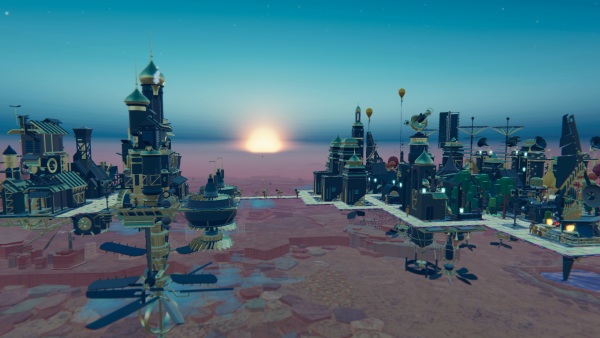 Players will start off small and expand their sky city into a blooming paradise by gathering resources from the world below. You have a few workers and blueprints to start building homes, food storage, schools, factories, and so forth, but you will need those precious resources in order to build. Collecting materials such as wood, water, and food will ensure your kingdom is kept up afloat and thriving.

If it sounds pretty easy so far, your wrong. There is quite a bit of work to do in order to expand your empire and make sure everything keeps afloat. For starters, you’ll need to explore the vast landscape before you and connect with various towns and settlements on the ground. Make contact and build relationships to acquire what you need. Then you’ll be sending out squads of scouts who in their tiny planes will gather the essential supplies needed to keep everything going. You’ll add more platforms to your city and thus expand the multitude of your civilisation in the sky, but more will be required regarding food and water.

Other settlements are extremely important in your venture, so having a keen eye while exploring is a must. You’ll be able to trade with for resources for items such as blueprints and materials. You may embark on small quests set by recruits from these settlements and in return, you will obtain quests for rare schematics and treasures. Research plays an important part in creating new buildings and technology that will advance your civilisation even further, making the city even more desirable. Of course, the research and new technology come in handy when creating things such as counterweights and extra thrusters, allowing you to build more and expand further.

This really is a simple yet engaging city-builder that’s incredibly heartfelt and peaceful, you can dive in, play and not worry about anything too bad happening for the most part.


What Airborne Kingdom does well 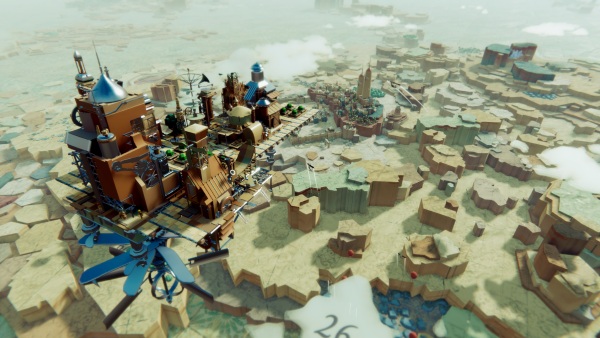 Airborne Kingdom offers a wonderful experience that might sound stressful yet goes at a wonderful pace is an incredibly enriching experience. The goal isn’t about death, invasion, or war, but rather giving hope to a world that needs it while looking for relics of the past and treasuring everyone and everything you find in the world below.

This is a very beautiful-looking game and one that will keep you engaged within some pretty calm parameters. It’s a city builder with a unique premise, offers great pacing to learn, and allows a good amount of creative freedom, while not harboring you with too many restrictions and brick walls.

If what I’ve said sounds too soft or easy for your liking, don’t worry. Since its PC launch, the developers have added in a hard mode which does bump up some of the values and timers, thus making the previously mentioned issues more problematic.

There is also a “Toybox mode” which allows you to make whatever you want without any threats present in the story mode.


What Airborne Kingdom could do better? 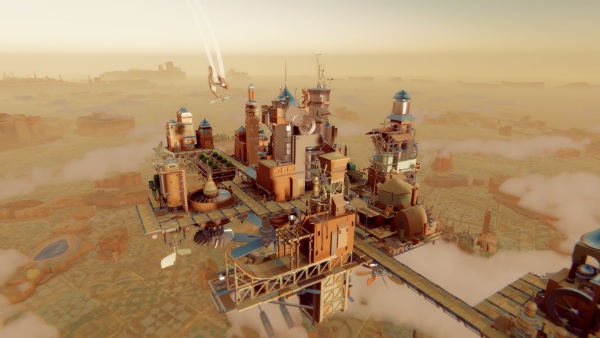 Airborne Kingdom could be a little too simple at times and it would have been great to see more factors play into the Hard mode of the main game. Such as dynamic weather which affects your city, or just having to manage relations with settlements more proactively. There are of course risks and dangers, but you won’t feel the full force of the consequences for any mistakes you make unless you play in hard mode.

Speaking of which, the developers have added in this level of difficulty to add another layer of challenge. One that’s not so chilled. In exchange, we do get the sandbox mode, but as the game is quite short the balancing for the hard mode feels off at times. And while I appricate the developers adding in this difficulty, it feels like it was a disgruntled choice and one which I didn’t feel was needed.

But Airborne Kingdom also has a couple of pet peeves of mine, mainly small text. I always despised when games come over from PC and on consoles have the smallest text possible. There are no options for accessibility and having things like this is really just plain annoying. I’m not asking for The Last of Us 2 style options, but something to make the text larger would have been nice.

Airborne Kingdom is quite the gentle carpet ride through the sky at most times (unless you play hard mode). It has a nice concept, theme, and morality to it while allowing players to be creative and give that creativity purpose. It can be a little too simple for veterans of the genre, but newcomers or those who want a chilled city-building experience will really find the wholesomeness and beauty of Airborne Kingdom to be quite captivating. Plus, there is enough here to make the purchase worthy with the main campaign (if not a little short), a new difficulty (if not a little unbalanced), and of course, the Toybox mode (which is great!).

Airborne Kingdom is definitely worth checking out and playing.

-- Quite short on the main campaign

- Hard mode is a little unbalanced