There have been plenty of games that boost the status of “Being so good at being so bad” with a leading character who can be a rather unlikeable chap doing all sorts of mean deans to pass the time. Yet many, if not nearly all these games have multiple paths to take, being bad or being good. And often being bad usually doesn’t amount to more than annoying bystanders with an RPG. Do you know what being truly bad is? What is being evil is and really enjoy being a complete a truly awful individual?

Welcome Succubus. A game about being bad, but is it good at doing that? 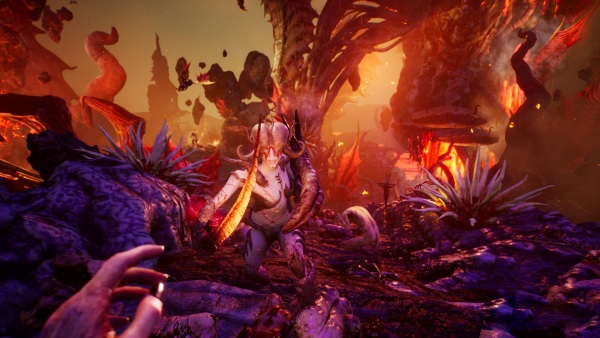 Succubus is the spiritual sequel/spinoff to 2018’s Agony, also made by Madmind Studios. Agony was a game that needed tough love, one that showed immense potential, looked amazing, and felt like an interesting step for the indie scene. But sadly, it didn’t come out so well.

Succubus is the next game from Madmind Studio (who are also working on the awesome-looking Paranoid and the not-so-good-looking Tormentor …) and centers on the demonic priestess of lust - Vydija, who has risen to the top of Hell after the fall of the Red Queen. Vydija is living the highlife with the protagonist of Agony, Nimrod, and together they reign supreme. Raising a new empire from the ashes of the old and inflicting unimaginable pain to anyone who crosses their paths.

While everything seems very rosy for Nimrod and Vydija, sadly all good things must come to an end, and soon enough a powerful demon is known as Baphomet who, together with his army, decides to venture forth to murder Nimrod. Vydija is captured and maimed while trying to stop this new foe from proceeding to Nimrod. After surviving the ordeal, Vydija vows bloody revenge on Baphomet and their armies who reign over Hell now.

In regard to the basic plot, it’s a simple tale of bloody revenge that has an immense body count. But underneath the surface of this rather simple plot, lies many relationships between yourself and other demons, a lot of subplots, and a story that feels as though it keeps shifting its priorities around at each turn.

Not a lot is explained, mainly who certain characters are, what purpose they have in the grand scheme of things, and generally just how Vydija is functioning her way through the world or how she knows which path to take. There are a few cutscenes to help flesh out the plot or events that have occurred or events Vydija is about to proceed with, but much of the dialogue is often just filthy talk between Vydija and other demons calling each other *** ***** or ******* *******. Yes, there is quite a bit of mudslinging here and it isn’t pretty.

Overall, the plot is fine, you can just play the game and understand what the core of it is a revenge tale. While Vydija herself is unlikable for the most part, she does have a certain weird charm at times. Plus, the demons you’re facing off against are normally much worse. So it’s a bad vs bad situation which is always cool to see. 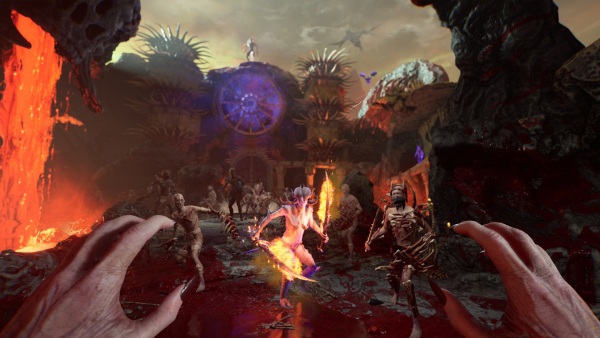 Right, I must inform everyone that Madmind Studios clearly has some serious artistic talent working for them. These guys also know how to portray Hell itself in the most beautifully disgusting way possible.

From the high level of detail, impressive dynamic lighting, architecture, colour scheme … and pretty much everything feels spot on. I was unnerved but amazed while trespassing my way through hell, admiring the level of craftsmanship put into designing Hell but also how grand and varied it felt.

So, Bravo to Madmind for creating another title with the best looking Hellhole in gaming, one that equally disgust, delight and astonishes you.

The best way to describe Succubus is the gamiest game I played this year… if that make sense?

By which I mean, you play a video game, and it just feels like a video game? Having all the great stuff games normally have and just amplifies these elements as much as possible? The structure, pacing, mechanics, and all the main elements feel very much like a classic videogame format. It’s a good, and not-so-great thing at times.

Players will be given the chance to venture through Hell in a large selection of stages, each one usually with a simple goal of making it from point A to point B to featuring a boss you must defeat. To make it through each chapter of Hell, Vydija will have an assortment of abilities and weapons to “Rip and Teat” her away through the legions of Hell who stand in her way. Vydija will be able to find new weapons and powers to become ever stronger, and by completing various challenges in each chapter, Vydija can acquire points to unlock new weapons and armours, making her even deadlier.

Players will be able to equip giant hammers made from bone, massive Saw bladed swords, Bows, and much more. Powers come in different forms, by setting your enemies on fire, laying explosive mines, or slowing down time briefly to slice and dice your way through a bunch of crazed b*****s. And by combing different weapons, powers and armours, will Vydija become the ultimate badass in Hell.

Players can put killing to one side and chill out in their very own lair, which is immensely customisable. Changing everything from Vydija’s throne, blood-filled pool where she baths herself, balcony to overlook her soon-to-be domain and the places where she tortures the poor perverts assigned for her punishment. Or lucky depending on your prevised outlook. 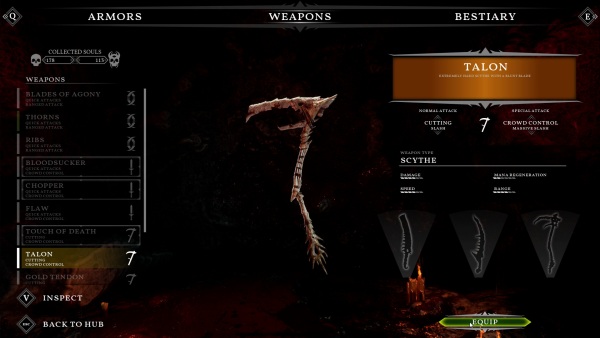 What Succubus does well

What I feel Vydija’s adventure accomplishes well in many regards is nailing down a good gameplay loop, with a mixture of exploration, combat, and plenty of challenges to repeat playthroughs a thing. The level of customisation from Vydija herself to the base of operations (or her lair if you will) is pretty great. You can make Vydija and her lair in your own image from the smallest detail. Unlocking all the other content, such as weapons, armours, and features to her lair is something that will keep you invested and feels like a great reward for all the hard work.

The world is astonishing and really captures your attention from start to finish, along with having a great atmosphere and tension, all due to the impressive visuals and sound design.

The combat itself is solid if a little simple. But it’s something that blends in plenty of different elements that it’s energetic and flexible. You can kick enemies into spiked walls, tentacles, and even iron maidens which is very cool. Making the whole thing feel like a very mature version of 2008’s Dark Messiah. There are plenty of environmental hazards Vydija can interact with, causing massive devastation and a large variation of enemies to get caught up in the fire.

I feel Succubus is a solid game, with plenty of good action, set pieces, and an immense level of customisation to keep you engaged and replaying for hours on end.


What Succubus could do better 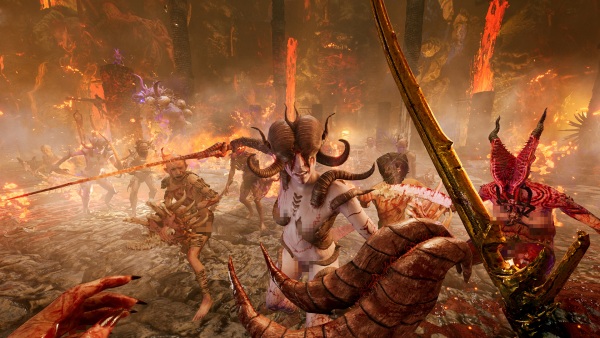 My main issue with Succubus is just how flat the combat can be regarding pacing. What you’ll notice very soon is Succubus will often throw out the same pattern for pretty much all its encounters. You’ll get a whole heap of basic enemies to rip apart in a large arena, then be tossed a single (maybe a second) heavy enemy, then be given another heap of basic enemies to finish things off. You do get the odd change-up, with shielded enemies and faster warriors, but again, they’re just thrown in as a group, rather than things being mixed up.

You look at a game like Batman Arkham City or DOOM Eternal, and what these games do to make encounters interesting. They mix up fights, to feature your basic enemies, the fodder if you will, along with a strong enemy or two and a special. What results is a compelling chess-like game of priory, preference, preservation, and position. All accumulating to who to take out first, the means to do so, keeping yourself alive, and having a backup plan for when things get hairy.

Succubus just throws everything at you and no matter the weapon or power you use, it just feels straightforward. Of course, you’ll switch weapons depending on the enemy, but the results are usually the same. Something such as weaknesses just doesn’t play a part here, and you could simply get through a lot of Succubus by kicking fools into spiked surfaces.

Not to say the combat isn’t satisfying. It is quite fun mashing your way through legions of poor fools with weapons that look like they’re from a Clive Baker wet dream, it’s just the combat feels a little auto-pilot for my liking at times. Even with a couple of different enemies at once, they're not too different from each other to make the fight more engaging.

I also wished the world, while beautiful in its presentation, had a little more depth, with more secrets and even more interesting arenas.

Bosses can be fun, if not a little simple, and do break up the steady flow of combat through Succubus’s 10 hours or so campaign.

You’ll probably guess, but Succubus has some real f***ed up s*** in it. I’m personally fine with artists and designers taking a subject such as Hell and pushing what they can do for its visual presentation … but wow. Some of what you’ll see is truly messed up. And that’s great, that’s what Madmind Studios wanted, and I will give them credit for making Hell so unpleasant at times. But just giving the more innocent-minded people a chance not to be mentally scarred.

Succubus is defiantly a little rough around the edges and could have benefitted from a little more depth in it’s combat. But what you get is an extremely disturbing and nightmarish gorefest through the bowels of Hell and the game is unashamedly proud of it. This is great if you want blood, guts, a visually stunning Hell that captures the dread and Godlessness you imagine the place would be, and plenty of fun game mechanics that any right-minded gamer would love. It’s not perfect, but it’s a massive step forward from Agony and makes me feel more confident for the upcoming Paranoid.

It’s worth checking out, even for a few hours of sinful fun!