The future is going to be so great at this rate. Well, if you’re a fan of dystopian, cyberpunk-themed futures where the “Corporations” own everything, then yeah! What’s there to do in this future you may ask? Well according to the likes of Akira, there will be plenty of drugs, neon lights, and gunfights. All these lovely things have influenced and shaped today’s game into a brutal and intense action pack co-op shooter.

Let’s see if The Ascent has what it takes to be the crown king of dystopian futures!

What is The Ascent? 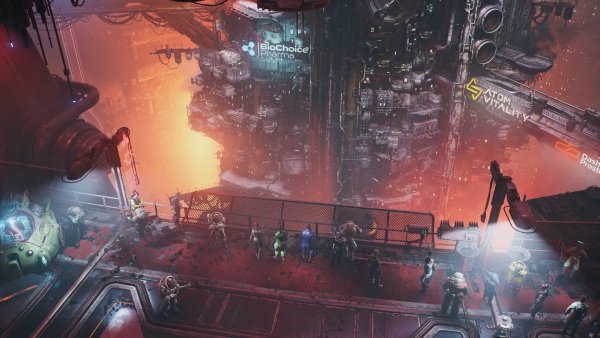 The Ascent is an isometric co-op shooter with RPG elements, set within a distant dystopian future, where corporate espionage, sabotage, hacking, and death-dealing are a part of everyday life.

Taking players into the world of The Ascent Group arcology, a thriving corporate-run metropolis with creatures and villains from all over the galaxy. Controlling an enslaved hired gun, your job is to take care of all the problems raised by the company that owns you and the district you live in. Using a mix of brawn, brute force, and high-tech weaponry, players will embark on a catastrophic venture filled with mayhem, unraveling conspiracy and the best cyber enhancements blood money can buy.

Doing it solo or with a trusty chum or two. 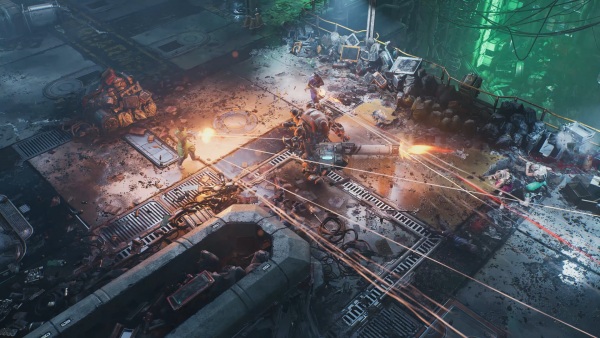 Everything seems fine and dandy, as fine as a horrid corporate-run future can be, until The Ascent Group shuts down and no one knows why! The survival of your district is compromised and it’s time for you (and up to three friends) to find out what is going on. Taking up your arms, players will venture through the massive metropolis, from its bleak and claustrophobic underbelly, through the decaying gang warfare streets of the city, to the high rises of the ultra-wealthy.

Taking on various jobs to either slay targets of interest to the company or finding lost agents and legendary hackers to help you find out what’s going on, will chip away at the mystery of the shutdown. There will be plenty of backstabbing, revelations, and devastating consequences for the bloodshed you take part in.

The Ascent’s core plot is nothing to scream about and feels like a very run by the numbers, chess piece structure story of go here, find someone, go here, kill someone, and so on and so forth. By the end, the revelations and twists can be seen coming from a mile away.

But The Ascent has an incredible sense of world-building, with an immense and interesting backlog of lore to give it depth. Each bit of the world and the characters who live within the neon lights and decaying structures does grab your attention, and listening to passing conversations, reading personal logs left by the side of the road, and engaging with particular figures in the story do give a little more purpose and substance to the journey overall.

The varied selection of citizens and their lives really make everything feel highly organic and genuinely like a real-life city.

As for the plot, I would consider it to be like a pond, nothing that would strike me as thoughtful or grand, but it’s world and characters, really can be considered as deep as the ocean. 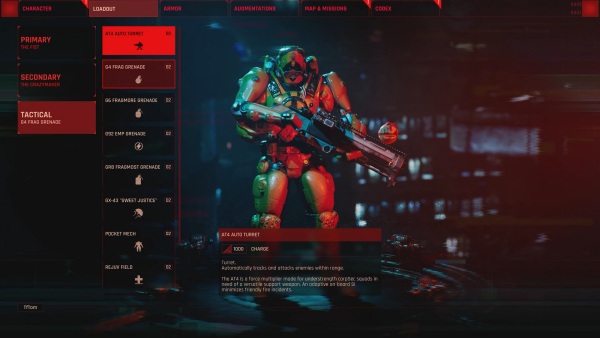 The Ascent focuses on two things mainly – exploration and action-packed combat. Players will venture through the massive world of The Ascent Group, exploring city streets, the underbelly where all the trash and runaways go, and to the fancy complexes and high rises of the elitist scum. In these locations, you’ll be mostly killing those looking for your blood, and finding items of interest, whether story-related or for personal gain.

Starting off with nothing more than a peashooter and your bare hands, but soon enough after making waves, players will upgrade their arsenal to bigger and more brutal firearms. From submachine guns to shotguns that set your targets on fire, smart guns, heavy pistols, and much more to cause total devastation. Expect to fight plenty of enemies, varying from small, scrawny cannibals in the sewers to heavy-duty enforcers that will turn your head into cream soup! There’s a good variety to the enemy line-up as each section of the world hosts its own group of baddies and monsters to deal with, whether big or small. Plus, plenty of bosses to keep you on your toes.

Luckily, as mentioned previously, you will be fully stocked and armed to the teeth. But to gain the full advantage over your enemies (and to have the most destructive fun) you’ll need to explore every square inch of the world to find new, bigger and better weapons and upgrade tokens allowing you t become stronger and smarter, but also give your firearms a little more of a kick.

There is plenty to do and kill, with a large variety of environments that keeps the journey feeling fresh overall. Arenas can often be cramped but provide a lot of cover and advantages to dish out the firepower. While this may look like a generic shooter in some regards, there is actually more of a tactical edge present in The Ascent, and fighting with friends is really recommended.

While there is plenty of shooting to do, players can also just bask in the pretty lights and sounds of each area and the central hub, where you can shop for new weapons, upgrades, chat to the residents, and take on side jobs to earn some extra cash.

Seems like a lot of people need a helping hand in this wonderful place, from getting a score of steroid infused drugs to linking up webcams across the city for a bedridden loner to finding a long-lost friend who’s living it large with a family of bloody thirsty flesh-eaters in the lowest parts of the city. There’s plenty to do and see. Plus, you reap the rewards, earn extra cash and tokens to become more of a badass, and believe me, you’ll need it for later in the game.

Before I continue with what’s good and what’s not so good, I have to state that The Ascent is a breath-taking game in regard to visuals and sound design. The lighting is beautiful, the world is immensely detailed making it feel truly organic, the level of NPCs roaming around is crazy good and the music is awesome. All of these things combine really make this one of the most compelling game-worlds to explore. And compared to a certain, other Cyberpunk-themed game that couldn’t match this level of awesomeness, The Ascent’s artists and world builders really do deserve as much praise as possible.


What The Ascent does right

Aside from looking and sounding good, The Ascent is a confident and solid shooter. The action has a lot of grit and gravity, while the guns have weight, and your actions feel devastating overall. The variation of enemies is pretty good, making for some intense and varied combat encounters through the 20 or so hour campaign. The roaster of guns, sidearms, and gear will lead to some excellent firefights and awesome spectacles of action. There are plenty of methods to disperse enemies, but plenty more ways to take on the hordes of gun-toting maniacs with class. You get your stand grenades, flashbangs, and incendiary devices, other bits of gear will help cause distractions or confusion so you can your buddies can get the upper hand.

There’s plenty of great RPG elements here too, allowing you to kit out, customise and alter your character as you see fit.

The Ascent reminded me a lot of a classic 2000s style shooter and it’s easy to see and understand why, as this was developed by a studio founded by game design veterans who have been in the industry for nearly 20 years. There is a sense of massive, often maze-like level design where there’s plenty of action and exploration meaning you could be playing any of the main missions between 30 to 40 minutes at a time. A weighty helping of gameplay that really makes you invest the time and effort whether alone or with friends.

But there’s also so much to do aside from the main mission. Finding pieces of lore and side quests do help spread your journey across the massive playground before you. Arenas for the most part are well thought out and the city is beautifully intriguing, with winding paths, arenas, and secrets to find.

The downtime also has some enjoyment, taking on the quitter side quests or simply hanging out at a local bar and absorbing the atmosphere really does make you apricate the creativity that has gone into the game. 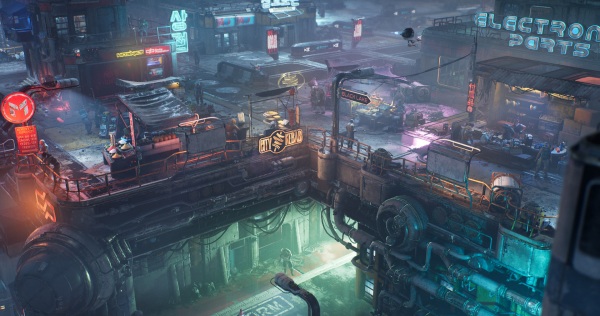 What The Ascent can do better

While I do love the detail and world-building, along with some level design choices, there were moments when missions would feel like they never ended. Going to extreme lengths just for something simple such as meeting a hacker but having the journey from point A to point B feel tedious. There were plenty of instances where if the route was shorter and condense, the venture would have felt more focused and more fun.

To be fair, it might be because many missions aren’t in linear locations, but rather chunks of the world itself. There are indeed some linear levels that go on far too long, but these are very few thankfully.

But for the sections/mission where the world is your path, you can venture off to find stuff, but you’ll also likely run into immensely high-level enemies. This is really annoying and does kill the urge to explore quite a bit. I do dislike games when they just have surprisingly overpowered enemies appear nowhere and next to areas where the enemies are balanced to your skill. Often making you find another route, backtracking, and generally wasting time.

There are also some issues with the HUD, the interface, and where mission markers point you to go. Particularly reading some text or figuring out which kind of Upgrade token you need considering they all look the same in the upgrade menu, barring one single dot on the icon. Some of the basics for UI design is completely missing and using different colours or simply making certain text and icons bigger would have helped immensely.

I get it, if you’re on a PC or laptop, it’s not so bad, but playing on even a decent size TV could result in your missing some fine print detail.

Mission markers or progression, in general, can be rather convoluted, as markers will point you in a direction, giving little in terms of pathfinding, but more infuriatingly can lead to you confusing dead end. It’s only layer on, do you realise you can only do certain side missions, after a set story event. But the game fails to mention this or even have side quests appear once you’re in a certain part of the story.

Plus, The Ascent is much better with friends. Solo is a tedious venture and tactical elements just don’t matter when you’re all by your lonesome.

While it won’t set the world on fire, The Ascent is an incredibly solid and fun shooter that has plenty of old-school vibes and immense action to satisfy any gamer. With a couple of annoying and dated issues here and there, they don’t hold back on what is an otherwise great campaign of blood, spectacle, and tactical action. Playing with friends is highly recommended, but with a decent price tag (or playing on Gamepass at the time of this review) it really is worth picking up The Ascent for its visuals, sound design, immensely fun co-op gameplay, and rewarding RPG elements.


A PC review copy of The Ascent was provided by the publisher for the purpose of this review.