Let us be fair, robots are going to take over the world at some point and humans will be a thing of the past. Robots are efficient, never get tired and of course, are deadly when they’re equipped with massive buzz saws. But robots also lack emotion or compassion (probs what makes them good murders then), and this could be an issue. Especially when one robot has to face the world alone just because they’re different.

What is Retro Machina? 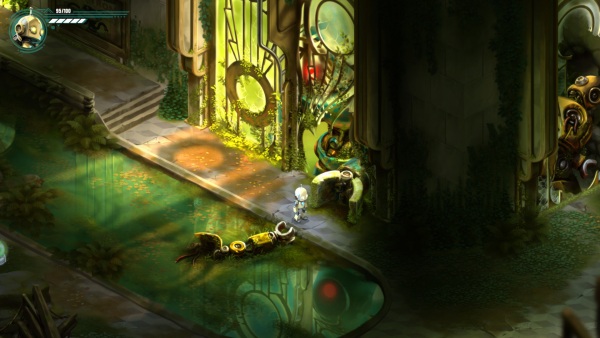 Retro Machina is an isometric adventure game with plenty of combat and puzzle-solving. You take on the role of a nameless robot who’s been corrupted by an unknown virus, giving them a form of sentience and free will. The other robots do not like this very much and decide you are a problem. Soon enough, our robot (I’ll call them Johnny 5 for this review) is soon exiled and finds itself in the middle of the remnants of human civilization, looking for answers and a cure.

Johnny will have to explore several massive locations to find the answers they’re looking for, to repair themselves and go back home. But as the story develops, we learn not everything will be so easy and we will be doing some major self-reflecting along the way. However, there are those looking to switch off your processor, for good! In other words, bad robots want you dead.

So, get ready to embark on a futuristic venture where you will be fighting your way through legions of robots and solving complex puzzles in order to find your way home.

When looking at Retro Machine, I was pretty much blown away by how beautiful the game looked. It’s not very often we see a game that looks as though it’s been painted by talented hands. It’s remarkable to see such effort go into designing the world and all it’s denizens, with a fantastic level of detail, colour, and depth to really make the world utterly engrossing.

Visually, it’s break taking and the 1950’s style is extremely charming. With everything feeling part of that era, even from the robot designs. It would be easy to compare this to something such as Fallout, but then you have to realise Retro Machina goes much further than any Fallout game has gone with its presentation and visuals. Along with the visuals, the sound design is also top-notch, with beautiful, yet haunting musical scores and intense electronic beats when the action ramps up. 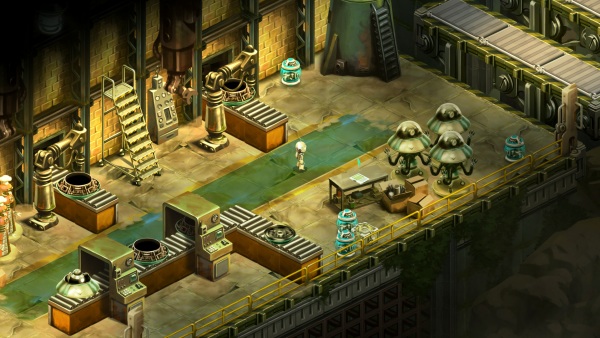 Retro Machina focuses a great deal on two key areas, combat, and exploration. Players will be dropped in massive locations, often looking for key items and completing a number of objectives that will progress them through the story. Each location is broken up into sections, each featuring its own enemies, traps, puzzles, and rewards for those keen explorers.

There are some Metroid-Vania elements here, as players will gather key items and gear which will help them unlock new areas or venture further into unknown regions for extra loot and rewards. There are plenty of puzzles to solve, many of which make use of the most interesting mechanic in the game, the control feature. This allows the player to control an NPC and have them aid in combat or simply help with a puzzle that involves multiple switches.

Combat makes up a good chunk of the game, with plenty of intense and challenging brawls popping up in the robotic adventure. Players have a chance to purchase new skills and maneuvers, helping them increase their damage output. Or to use that nifty control trick to bring an unsuspecting ally into the fight. Just beware, if your newfound buddy takes damage, so do you.

What is good about Retro Machina? 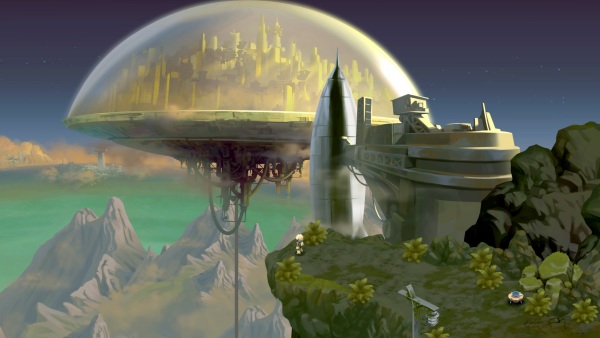 As mentioned before, the world is simply breathtaking. But not only is it nice to marvel at, but it is also fun to explore. The world is dense and full of life, but also harbours plenty of danger and secrets. There is conflict around every corner, whether it is physical or lateral.

You will be exploring the unknown bit by bit and slowly unraveling an interesting mystery, which most of it is delivered through the world itself. Along the adventure players will be asking questions on what has happened, how did everything lead up to this point, and whether anything other than the robots survived. The world kept my attention throughout with its clever environmental storytelling, but also, its immense structure that gripped my attention when exploring.

The world/level design is quite masterful, close to something such as Resident Evil Village, Castlevania: SOTN or even the brilliant Metro Prime. Everything is layered perfectly, discovery is intriguing and engaging, but above all the world felt as though it had great pacing (for the most part). Finding important items, and the tokens allowing you to upgrade/purchase skills kept things interesting and made this one of the most compelling worlds to explore.

The control mechanic is a nice addition for both puzzles and combat. While I found it more useful during puzzles, it does have its moments of use during combat. Providing the encounter, you’re in doesn’t swarm you with too many powerful enemies (more on that later). At first, I thought the puzzles and this mechanic would be a one-trick pony, but the developers and level designs have made sure to elevate each encounter/puzzle you have to use this in. From a simple venture of using a spider bot to push a button in a hard-to-reach place, to using a robot with a buzzsaw to destroy a power box, while avoiding a massive death laser from a moving turret. There are plenty of varied situations to keep you invested and entertained.

What did not work so well? 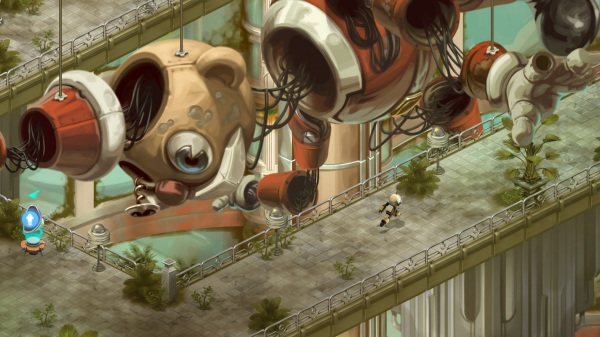 While there are many strong points to Retro Machina, there was a slight downside to each of them.

First of all, the combat does either spike or drop in difficulty altogether. I found that in the early stages, there was plenty of frustration, as powerup or the tokens you needed for them were extremely rare. Even to explore as much as possible would provide nothing more than a couple and having one, maybe two power-ups or skills for a couple of hours of combat and exploration did get a little tedious.

It reminded me of the first hours of DOOM Eternal, where it’s an amazing game, the first few hours before you get the good guns and upgrades can be an utter tournament. Proving to be unbalanced, tedious, and sluggish.

Retro Machina has this problem, but not as severe. I feel this is due to the lengthy campaign overall, as that the first few hours will bring much joy, but plenty of frustrations. Then, on the other side of the coin, some encounters later will randomly be so easy. It is simply weird how some of the main events in the late game were just laughable and the first few could be bone-breaking infuriating.

The world is also a little annoying to navigate as well. Mainly due to the unhelpful map and at times the sheer scale can be overwhelming. Especially when enemies will respawn each time you come into the area.

But these were things that didn’t harm the overall experience, nor did it overshadow the great things I ended up loving.

Retro Machina is a quirky, beautiful, and downright entertaining adventure you should not miss. While it’s spiking difficulty, confusing map, and small hiccups here and there might trip it up every so often, Retro Machina doesn’t fall from grace. Its beautiful visuals, enthralling world to explore and great puzzles make it something special. Highly recommend you guys check it out as soon as possible.

A Steam review key was provided by the publisher for the purpose of this review.