We don’t tend to get many boss rush-style games these days … or any days for that matter. We have had some which have been certainly excellent, such as Cuphead. But developers don’t tend to focus on developing games where you just fight bosses. Maybe because some people don’t like bosses, or to play a whole game where you just fight bosses and not do much else. I can understand why, but if done right, a boss rush-style game could be an intense and mesmerising experience! Right?

Well here is the latest in the small genre of titles, Godstrike! 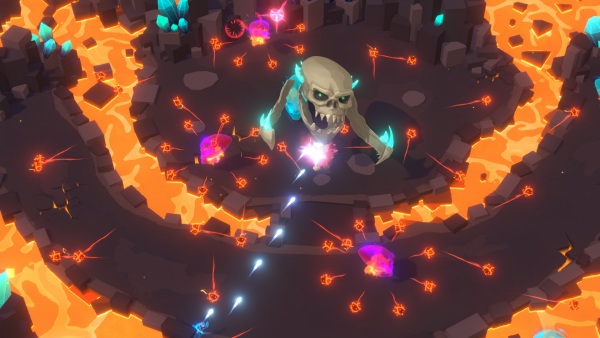 Godstrike is a top-down, twin sticker shooter where the focus is beating a line-up of bosses, all coming in different shapes, sizes, and abilities to mess you right up. The extra cherries on top of this boss-filled cake are the “Bullet Hell” elements, where the screen is littered with different variations of deadly projectiles, which you must avoid obviously. And more interestingly, there is a time limit for each boss, but time is also your health and currency.

The goal is simple, fight a gathering of epic bosses, all with different powers, tactics and stages that range in difficulty, but also heavily consider the impact time has on your life. As time is quite literally your life. Taking damage and using abilities drains your remaining combat time, so watch the clock!

In the tale of Godstrike, players will take on the role of Talaal, or more so the embodiment of Talaal as she chooses a bearer. The reason she has attached herself to a human being is to fight the siblings who are hunting her down so that they may absorb the power within the mask. The bearer is now trapped in a war that does not belong to her, a cycle that seems impossible to break. Time is her ally but also her greatest enemy in the battle against these supernova beings! 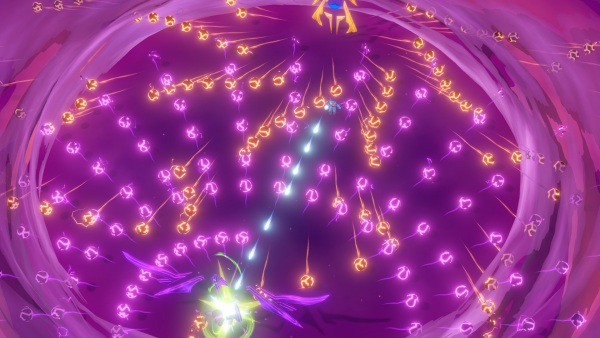 Talaal will start her journey in the middle of the unknown, a space between time and existence, but a place where she can prepare for her next battle. The overall goal is simple, defeat the siblings and reclaim your power through their defeats.

Each boss will present a different type of challenge that is brutal, demanding, and requires great timing, reflexes, and above all, patience. Talaal will only have a certain amount of time to complete each fight and must be mindful that each hit she receives, will heavily reduce the time she has to fight. When the time runs out, she will have once chance to finish the fight and one single hit upon her body will end it all.

However, Talaal can equip abilities whether their passive or to be used when she has collected enough essence from her opponent. These abilities include shields that protect her from a number of hits, become quicker on her feet, increase her fire rate or simply launch a massive shot that will devastate the life bar of the boss. While passive abilities are free, ones that help her defense and offense will cost her time. Quite literally.

Bosses can be long and require a lot of memorisation with trial and error. Learning their attack wind-ups and memorising the patterns and gaps in between the projectiles they fire. As this is a bullet hell style boss rush, expect there to be an immense amount of projectiles on screen at one time. It gets ridiculous, believe me. 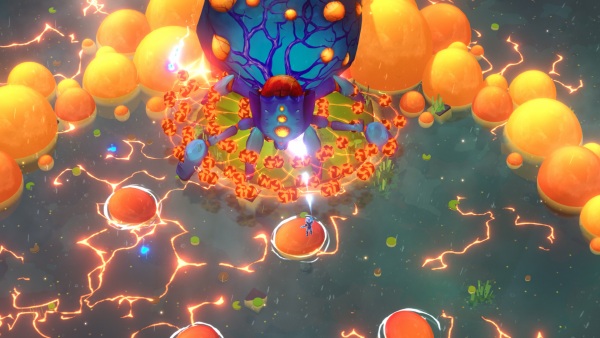 Visually speaking, Godstrike is a beautiful-looking game, with a vaguely cartoony art style that incorporates a lot of colour and creativity, without sticking to some traditions such as using outlines for objects, environments, and characters. It was a visual treat at times, and the artists have made sure to blend a few different tricks to keep things visually engaging throughout.

I was also extremely impressed with the aspect of time being both a currency and health bar. It is an intense experience when you are worried about time and your health as it winds down slowly. Deciding on whether you be selective with your chosen abilities, picking only one to two but keeping a good amount of time just in case. Or saying, sod it, and picking out some heavy hitters that could really help in a fight. This is a unique and pretty dynamic use of time, making this one of the more engaging and interesting timed games I’ve come across. Minding the time is not just about beating the clock, but also considering how not to waste it in a fight, or when you’re preparing for it.

Most of the bosses are also pretty cool, with them all having cool designs that resembled something from the Darksiders series. And all their behaviours and tactics did change drastically from one another. Whether they were stationary, quick movers, or heavy hitter, you can certainly see each boss has their own thing going. While a lot of the line-up feel disconnected from the rest, not fitting a certain pattern or vibe of creature design or lore, I did like the variation to their designs and many of the obstacles they presented.

What didn’t work so well? 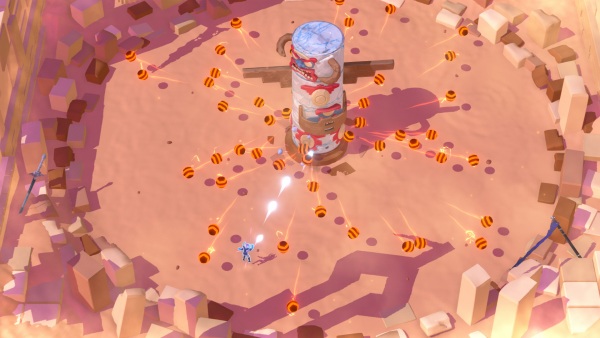 While I did enjoy some boss fights, there were quite a few which became overly long and tedious. Mainly the faster-moving ones that had multiple stages to defeat.

While I understand this has a “bullet hell” style approach, the immense number of projectiles or their patterns at times really were ridiculous and especially when you consider the limited time. I can see what the developers had in mind, whether you play it safe and avoid most projectiles, or get in close for more damage. However, the range of attacks from Talaal is extremely limited, only with one or two powerful blasts (that don’t make you immune from attacks either …. Why?) or just a faster pace to fire rate. Cuphead at least gave you multiple outputs to your attacks, whether it was rapid-fire, a shatter style bang, or very heavy explosive. You had a good choice in Cuphead and even during the more extreme attacks from bosses, you could always fire back.

Godstrike is aware time is of the essence, but the balancing feels off when it comes to immensely fast bosses or those that often spew a giant spread of projectiles. And your attack can barely reach them. You do get something near the end of the game which allows you to automatically have all shots hit your target, but the duration is pathetically short. While other heavy attacks can easily miss if the target moves away and while launching these attacks, you can’t move and can still be hit. Seems massively unfair to me.

While the main campaign does have some balancing issues, at least the other modes give you much more abilities to choose from and a little more time to fight. The Arena and Challenge modes were much more fun oddly enough, but I figured due to the reasons previously mentioned. I liked the extra content given and feel this could be expanded upon to keep player investment going.

I did like Godstrike, but I won’t say it beats Cuphead at the boss rush game. It’s visually awesome, has some great boss fights and the time aspects are really compelling. But there are definitely some balancing issues and while bosses for the most part are cool, the “bullet hell” can be a little tedious by the end, especially when some elements are tweaked to be against your favor. I do recommend this, especially if the developer decides to add more bosses in or even more attacks. Where it stands now? Godstrike is good fun, but not a great boss rush game that will stand the test of time. No time pun intended.

A Steam review key for Godstrike was provided by the publisher for the purpose of this review.