Crash on the Run

The mobile market is booming with even more publishers and legendary icons making a leap on mobile gaming. The likes of Agent 47 in Hitman Go and Lara Croft in Tomb Raider Go have been extremely successful. Even the likes of Tomb Runner have been a pleasant surprise to many gamers. So why wouldn’t it work with a character like Crash Bandicoot? Well, the folks at King have decided to do just that with Crash on the Run.

What is Crash on the Run? 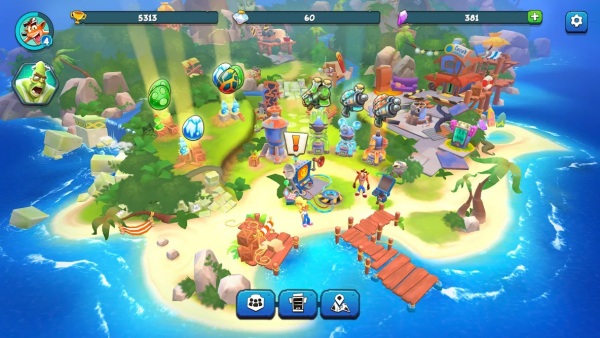 Crash Bandicoot is the legendary orange marsupial who was created in a lab by the evil Doctor Neo Cortex. He’s a cool guy who wants nothing more than to chill on the beach with his friends and family, except Neo Cortex isn’t having any of that and is up to another dastardly plan to ruin everyone’s day. So, it’s up to Crash, Coco and Aku Aku and friends to stop Neo Cortex.

Players will explore the might Wumpa Archipelago, featuring classic islands and areas such as Turtle Woods, Temple Ruins, and The Great Gate which all Crash fans will surely love to revisit. As you embark on this crazy adventure, adventure Crash and Coco will face their most dangerous enemies including Nina Cortex, Dingodile, Dr. N-Gin, Fake Crash & Coco, and more.

Crash on the Run is a classic Endless Runner where players will control either Crash or Coco as they run through a vast number of arenas, collecting loot, avoiding hazards, making epic jumps, and defeating might bosses.

Crash and Coco can jump over various obstacles in their way, spin attack to break crates and lunch enemies in their path forward (handy for dealing with Nitro Crates), and slide under low-hanging barriers. The main goal for each of these runs is to reach the end and defeat one of the many drones that protect the main boss of that area. Defeat a few of these Drones and you will be able to complete the Boss run. Defeat enough Bosses and you will save the day.

However, to progress through to the many islands and even have a chance to take on the Drones/Bosses, you will need to collect resources and create a varied line-up of Gadgets and Bombs in order to defeat your enemies. You do this again by running either the main runs (Drones or Bosses) or simply venture into one of the dozen or so optional runs, which allow players to gather an immense amount of loot and resources.

So, what we have is a straightforward Endless Runner formula, with plenty of running, jumping, and collecting sweet loot. This being pretty much the perfect genre for Crash to have a game in. But Crash on the Run has implemented plenty of elements, from the other main games to give this a slight edge over the rest.

Progressively each run will introduce new mechanics, whether it’s bouncing mushrooms that allow you to jump greater distances, boxes, when smashed, will reveal new paths or move massive obstacles or enemies that can be lunged forward to destroy TNT and Nitro crates. Plus, Crash and Coco have the help of good old Aku, the awesome mask that grants invulnerability for a short time if enough are collected.

What Crash on the Run does well? 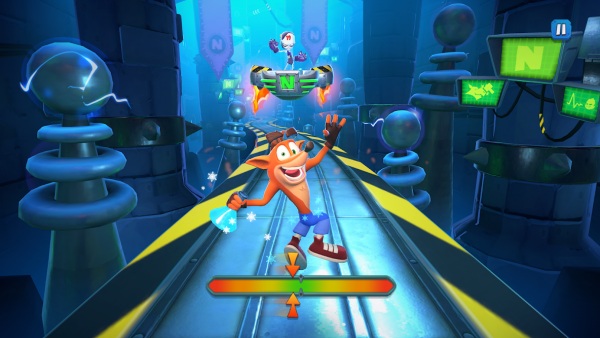 What I liked most about Crash on the Run was just how well it translated into a mobile game. While I liked Tomb Runner and other ported classics into the Endless Runner genre, Crash seems the most fitting.

It looks amazing, sounds perfect and the performance overall was fantastic. I did love how you could collect resources at any time and while it does get somewhat grindy in parts later in the game, overall, the flow and pacing were great. Completing optional runs offer enough resources to create what I needed for my next runs and overall difficulty was fairly tamed for the most part. You’ll have enough chances to avoid the unending dangers and Crash’s defeat is a minor bump in the road.

I found repairing certain parts of the island, unlocking new abilities and perks was also a nice addition, fleshing out the game from just being another Endless Runner. The number of new items that came into play during my journey really did helped create a varied and fun adventure that kept me amused for quite some time.

Plus, King now how to create a game that's incredibly easy to learn and master right off the bat. The general user friendly-ness of Crash on the Run was exceptional and best of all, I had some issues with controls or any bugs through my many hours of running. Exceptional work from King as always. 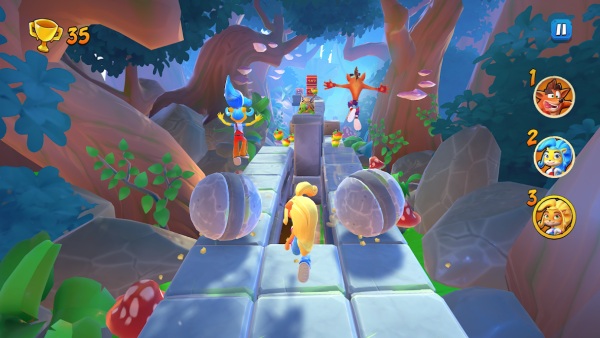 What did not work?

While I do admire King for their level of creativity and user-friendliness for Crash on the Run, there were some moments that just made me say “Ah, here’s the mobile game aspect popping up again”.

Purple Crystals are the premium currency of the game and as you might expect, these are a little hardy to gather over the course of the game. This is fine and if you complete an Aku daily task, you can get a couple here and there along with other daily bonuses. But with certain things, such as Skins offering the best attributes costing anywhere from 90 to 200 and over, you can see you might need to do some super saving! Or make a small purchase at least for a new Skin or two. And with most skins being only purchasable and not unlockable, this does seem a little unfair. With things like this, you can see where Crash on the Run gets a nasty bite of the mobile gaming bug.

This issue also pops up here and there when being defeated on a run and having the option to quit or continue. You can continue by watching an Ad or paying a fee in Crystals, which seemed a little hefty to me, even in the early stages of the game.

Overall, the game is not very grindy thanks to the generous optional runs on offer, and fixing up and unlocking new features of Crash’s hub area is quite swift. So, I could forgive this slightly, but not being able to unlock certain skins and the fee to continue was a little silly.

Lastly, I would have appreciated an option to turn off the ads in the game. I do understand this is a general means of revenue for mobile games, but having quite a few ads pop up here and there trying to sell Crystals and passes was a little tedious after a while.

I very much enjoyed Crash on the Run and highly recommend it to any Crash fans or anyone who loves a fun-filled adventure. Crash on the Run is certainly worth checking out especially for its colourful visuals, great gameplay, responsive controls, and a few neat features to make it different from other Endless Runners.

++ Simple and easy to grasp and play
++ Fun running gameplay, fit for Crash
+ Colourful, smooth performance and lots to do
-- Some repetition and grinding
- Nice to turn off the ads