Cyanide and Happiness: Freakpocalypse Part one: Hall Pass to Hell

Cyanide and Happiness is a comedy phenomenon for the Millennial generation since 2005. I can fondly remember seeing the evolution from greeting cards to online comic strips, to animated shorts and now their embodiment in gaming. Now, South Park has done a similar thing, even being adapted in multiple video games, with some amazing results and some pretty piss poor ones too. But South Park overall worked wonderfully well as point and click adventures. So, can Cyanide and Happiness work in the same genre with the same results?

What is Cyanide and Happiness: Freakpocalyse? 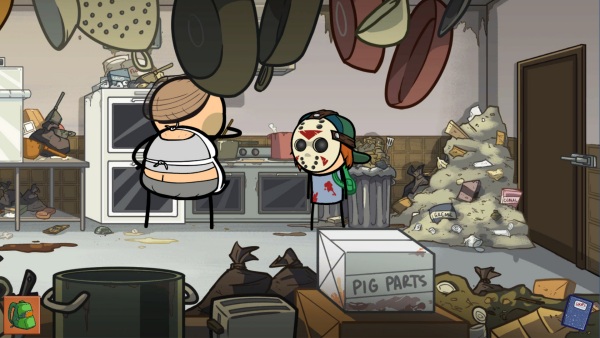 Freakpocalyse is a point and click adventure set within the Cyanide and Happiness universe. Much like the classics Sam and Max or Broken Sword, you’ll be doing plenty of pointing, clicking, exploring and puzzle solving, while meeting and befriending all the weird and wonderful characters. These include such lovable characters as Ted Bear, Kurt the Pyro Fox and Shark Dad (the few notable cameos). You play as Coop, a teenage outcast who is looking to make friends, best his bully tormentors and get a date for Prom. All the while, he’s helping many of the weird people in town, including his sex-obsessed Granny.

Coop is a generally good kid, but a push-over and social outcast. Lacking confidence and wisdom but dreams of being like his favourite superhero, Pysonic Steve. However, things will change as on a seemingly normal day like any other, Coop becomes entangled in a series of events that will forever change him and the town. To accomplish his goals, he will explore the town, help others and go places he shouldn’t really be going to.

If you’re a big fan of Cyanide and Happiness, then this is definitely worth your while as you can fan-gasism over all the nods and few cameos it has. Such as various pictures of Bumble-Bear and my favourite character, Ted Bear making a brief but memorable appearance.

What works and doesn’t? 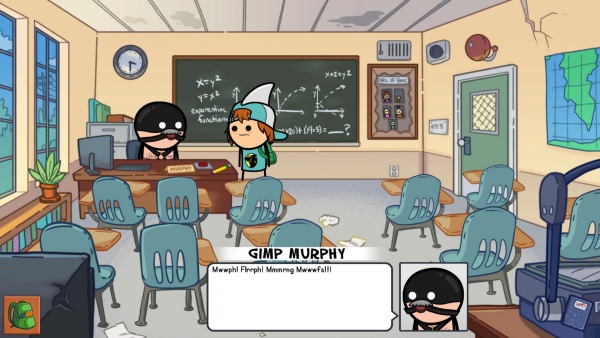 In terms of story structure, Freakpocalyse isn’t the most original setup with the average teenage outcast looking for a prom date and doing the odd chore here and there. But as you might expect, everything, including sanity and logic is thrown into the dumpster. Leading to plenty of hilarity. Now, this is just the first chapter and while it does end as things are getting good, I am genuinely interested in seeing the next chapter(s).

What holds back this introductory chapter and the thing to leave a slightly sour taste in any gamer’s mouth is the humour. I do enjoy many of the comic strips and animated shorts, as they work within a confined lifespan. Cyanide and Happiness work well in short bursts that have an intriguing setup, some weird and wild escalation of events and finally a devastating or sharp end. They’re not long or complicate, but rather a punchline with added punches and charm. It works for the format.

I had my doubts whether the writers could flesh out characters or events to keep them funny over the course of a 6 to 8 hours’ worth of game and sadly they fail for most of it.

The main issue with Freakpocalyse simply speaking, is that it's very one-note. Lacking any substance or layers to many of the joked and characters. What charm there is here wears off quickly. There are long conversations that revolve around one type of joke or subject, banter which could be cut down to make it feel sharper and lame dick jokes and cynical brutality.

I just found most characters to be annoying and mean spirited while lacking anything more than one personality trait. 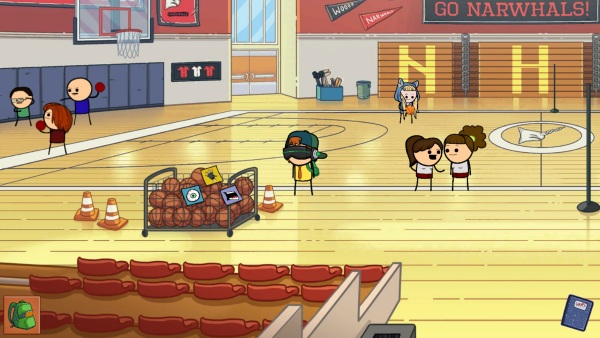 I do love crude, rude, and tasteless humour, but like anything, it must have a point and not be cheap. South Park does spew vulgarity, has plenty of mean-spirited characters/situations and has punch lines that do revolve around poop, dicks or children dying. Why South Park works like plenty of other adult animated shows, is that the jokes work on multiple levels or are usually fleshed out to have purpose and a lasting impact.

What is slightly baffling is that the writers have produced some great shorts and strips. One of my favourites is called Put ‘Em Down, featuring Kurt the Pyro Fox. The setup is that Kurt’s mum has had enough of him and asks a vet to put him down. The vet, of course, will not do it, despite the mum’s deranged bargaining and Kurt just being annoying. In the end, the mum does something which is bleak but darkly funny and sharp that you cannot help but laugh. Here is a great formula and has plenty of laughs, as you have an antagonising force with the mum, the straight man with the vet and Kurt is just a Kurt, the enhancer of comedy and the catalyst for the conflict.

It’s weird that there aren’t more characters or any moments with this level of creativity or comedic conflict.

In a game like Paradigm, which hosts lots of weird but wonderful characters, they all interact with each other in unique ways and have interesting personalities. For Freakpocaylse, most characters just resort to dick jokes or spew childish threats that get old quickly. Coop is likeable and has plenty of quirky observations, along with a few other characters which are funny such as his Granma or the elderly contortionist that needs spare change. But most just add nothing to the comedy and lack a meaningful or humorous persona.

It’s also very clear that the developers didn’t even think to integrate any comedy into the gameplay in any sort of meaningful way. The Fractured But Whole has quite a selection of moments where the comedy and gameplay intertwine. Like the moment the new kid (the playable character) has to choose which of his parents lives and dies. Both parents are trying to reason with their child, but also bicker and play the blame game with hilarious insults thrown at one another. Or again, Paradigm implements its sense of warped comedy into the gameplay with moments such as pulling a fake smile so a hired goon doesn’t beat you up. I cannot even express how funny this Quick Time Event was and how completely random it was.

Freakpocaylse just didn’t seem to understand how to write jokes with lasting impact, develop interesting characters or situations which work outside of 3 panels… 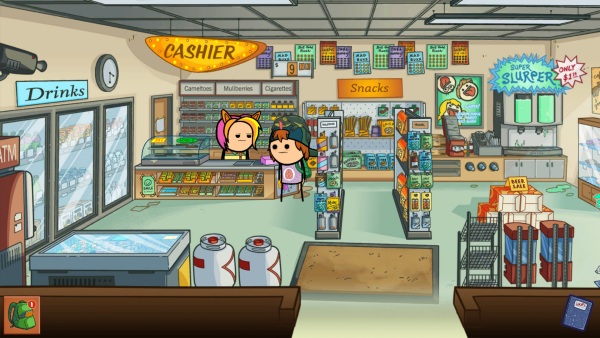 So, this is a point and click adventure and you can probably guess what you’ll be doing for most of it? Pointing and Clicking, what else?

Coop can explore his lovely town and high school which is filled with crazed teenagers and teachers who care just as bad. Things start off by going to the Principal’s office, before you move onto more exciting things, such as returning an overdue library book, helping a girl ask out a guy who loves overeating anchovy crisps and pukes them up (nice!), helping your sex obsesses grama get rid of a hornet’s nest or by getting a creepy guy on the street get some condoms. All of these are straightforward tasks in nature, but at times, require a bit of cunning and brainpower.

The pacing for the tasks is fluent and nothing feels overly long or tedious to complete. But there were plenty of instances when the solution to the problem could be found in the same room or next room. There aren’t many levels to figuring out a problem and at most, you’ll just need to grab one item to obtain another and there you go.

I’m thankful there are no puzzles with Moon logic to them, but fleshing out some puzzles, making more use of combing items or even having a unique mechanic that plays into the exploration could have worked out here massively. Everything just amounts to “Speak to the character”, “Get Quest”, “Get item(s) (maybe combine something?) and return to the quest giver. They are not bad quests at all, but just feel a little underwhelming and repetitive for the most part, again feeling one-note, never branching out or developing from a single resolution.

For those who always wanted to live and breathe within a Cyanide and Happiness sketch well then, this is the game for you. Visually speaking this is a nice-looking game, with fluent animations, wonderfully colourful and keeping to the weirdly minimalistic yet charming art style which captured the hearts of so many back from 2005.

It’s a great looking game but it also sounds amazing too. While the material is a little underwhelming for the comedy side of things, the voice work and performances and generally very good. Everyone delivering their lines with a bizarre sense of passion means it does a job that’s as good as or even better in some ways as the South Park games.

I mean, it’s not a beautiful looking game, in the same way, Cuphead or Ori, but it looks and feels pretty much like the perfect video game adaption of a beloved series.

I feel like this is a shaky first step for Freakpocaylse, yet I wouldn’t say it was a disaster and I’m keen to see where it goes. It looks and sounds the part and much of the point and click gameplay is solid and rewarding. Yet it doesn’t add any dynamic gameplay mechanics to make it any more interesting than the countless other point and click adventures. But also, with the humour being extremely one-note and repetitive, sadly this title can’t fall back on any inventive writing to keep you assumed. But there were some neat moments that made me chuckle and the performances are pretty good otherwise. Plus, Ted Bear shows up but needed more time on screen.

A Steam review key of Cyanide and Happiness: Freakpocalypse was provided by the publisher for the purpose of this review.