This is the end of the DOOM SLAYER’S era. The amazing revival of DOOM for the modern era has been a godsend for the FPS genre. We needed DOOM and more importantly, we needed DOOM Eternal, which has elevated the FPS genre, or at least how it can play out more effectively for those looking for a Skill-Based shooter. Both games have been behemoths and for good reason, been our game of the years in 2016 and 2020.

The DLCs have been a welcome addition to the base game and only expanded upon the lore, gameplay, and level of epic brutality. The DOOMSLAYER may have bitten off more than he can viciously chew as the Dark Lord is upon us, and now comes the final battle for all humanity and all the rabbits! The DOOM fans will get this reference.

Does this final DLC end the modern era of DOOM on a high note, or does it leave us wanting more? 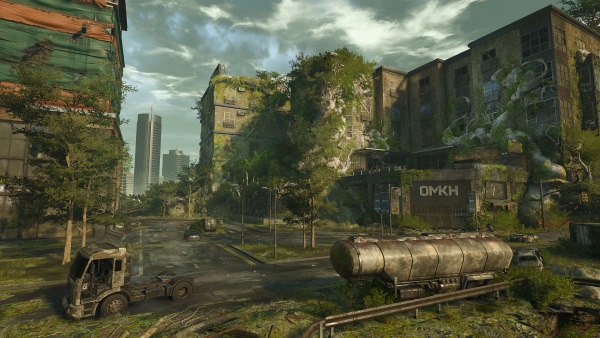 The DOOMSLAYER has worked his way up to this very moment, finding and finally destroying the source of all evil. The king of Hell and true ruler of the demons is now finally before the slayer and it could either mean the end of all times, or the salvation of mankind. The Dark Lord has been made into flesh and the slayer can finally end the fight by killing him. However, the Dark Lord returns to his palace and home to all demons, the great city of Hell that is locked away deep within the unknown. The slayer must travel across different plains of the universe, from the Great World Sphere to the reclaimed Earth to find the gate, gather the troops and lead the good fight to the very end.

Everything has been leading up to this moment and it will be the defining moment of the DOOM SLAYER. Now I have loved what Hugo Martin and the ID Software team have done with DOOM, fleshing out the lore and bringing in elements of other games, making them cannon in the epic saga.

Things such as having the same Doomguy from DOOM 64, the most underrated of the Doom games was a great move and pushing forth the ultimate villain, the Dark Lord is exactly right for this epic conclusion. How you bring together everyone from DOOM Eternal, including the Betrayer and all the troops makes everything even more special and the moment you see everyone join the DOOMSLAYER for the final fight was just pure magic.

While this is a short venture, it’s very memorable, with the right setup and payoff you could hope for. But the one thing which lets it down for me and I am sure for some other fans is the very end.

Not to spoil anything here, but all I will say is that overall, the end lacked emotion for me. I gather what the team is doing, wanting a send-off similar to Terminator 2 for the DOOM SLAYER and I can totally back that. But everything happens suddenly, and all is swept within 30 seconds or so. This really is a bummer as we get what could have been an emotional end, feeling more like “Yeah, we don’t have enough time to flesh this out, just get him back in the coffin”.

I felt a little unsatisfied with the end, considering we only have two main games with this Slayer and all he’s done, it just didn’t feel much of an end for him. I know we will see more DOOM games in the future, but I doubt we’ll see this Slayer again. 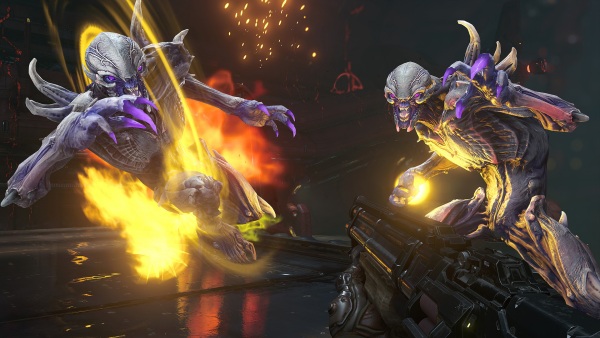 Well, there’s no point repeating myself but you should know the gist of the awesome gameplay DOOM has to offer right? You venture through a few levels, doing some exploration, simple puzzle solving, complete objectives, and of course, RIP AND TEAR demons apart in cool, badass arenas.

The DOOM SLAYER is fully kitted out with all weapons from the base game including any runes and perks too. He will move through detailed environments looking for key items, opening gates, platforming, and killing plenty of demons, including a few new ones to the rooster. Now the guns are all the same, no new additions here, but we do get a new melee weapon in the form of the Hammer. A powerful melee beast that stuns enemies and when timed right or used with the ice grenade/Flame Blech can harvest a massive load of resources. Useful against some of the new foes and old powerhouses.

Speaking of enemies, we get a few new additions from the armoured Baron, Stone Imp, Heavy gunner, and cursed prowler (my new worst enemy). Basically, these are all reskinned existing enemies, but each has a new perk and advantage you need to watch out for. The best being the armoured Baron, a normal Baron covered in armoured which regenerates shortly after it falls off. Players will have to disarm by using the Plasma rifle or shooting its main weak spot. Stone imps are fast, heavy, and will plough you into the wall with their spinning charge. Yet can be blown apart with the trusty shotgun.

The remaining enemies are fine but don’t really add much in terms of threat or tension. That is except the Cruse Prowler. Damn, this guy can really ruin your day and can only be dealt with a Blood Punch (make sure you keep one charge spare) and if it gets you, you’re cursed and unable to perform certain maneuvers such as dodge. Also, you lose health and the screen is covered in an annoying green tint. 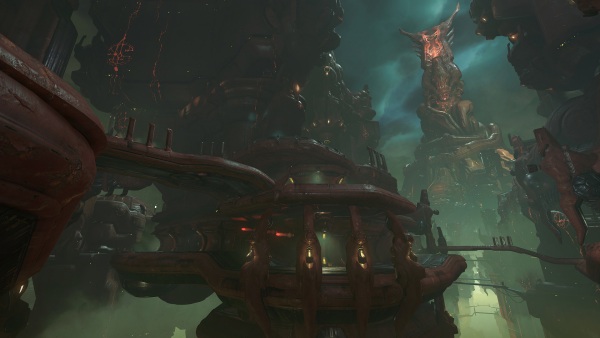 Most new enemies are fun to fight and the arenas are still amazing to play around in. There were some changes to the pacing, such as moments where dozens of imps would spawn, reminding me of a Serious Sam set-piece which worked well and of course, optional Hell Gates which offer insanely difficult encounters but sweet loot and rewards!

But despite the new enemies and some devastating moves from them, this DLC is much easier than the last by miles. I normally play on Nightmare and I had to check to make sure I was in the right setting. This really feels like the team has backed away a fair bit from the hardcore nightmare that was Part One, which really was a bit too much at times. But this feels even easier than the core game as well. Maybe it’s due to having all the weapons, or maybe just the enemy groups aren’t as strong as before. But Part Two is much easier to say the least.

Plus, the Marauder is really underplayed here. So, for those who hated this Powerhouse enemy, he’s not a big deal. Instead, we get what feels like more balanced pacing to enemies, making sure everyone gets a chance to shine and die! And again, Barons are thankfully underplayed compared to Part One, along with the Spirits.

Do not get me wrong, there are some seriously intense moments here and you can die very easily if you let your guard down. But if you are a decent DOOM player and a fast learner, it is not a massive problem, as most arenas are massive and allow you to flank and escape a tight spot. I do like the easing of the difficulty and if you want the ultimate challenge, just go for the mode that breaks people (Ultra-Nightmare)

Platforming is fine here and thankfully the Super Shotgun’s Meat Hook attached gets a cool new mechanic where you can swing from one point to another in style. Making the Meat Hook a multi-purpose tool that feels substantial. 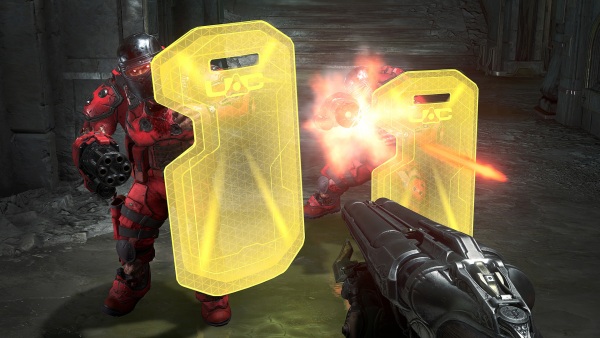 Now, for the finale. You know it has been coming and now you can finally face off against the one, the only Dark Lord himself. How does it pan out?

Yeah, it is fine.

This fight does get built up across Part Two and when it happens, it’s cool, but not amazing. Now the bosses across all the recent games have been fine but again, not amazing in my honest opinion. They are spectacular visually and can be incredibly fun. But the Dark Lord just feels too much akin to the Gladiator or even a Marauder. You mainly wait for the green flash, use the hammer and pummel away with everything you got.

I would not mind if they just went all out and did platforming, used multiple elements such as the Blood Punch and Hammer to break away amour, or even give you something new to use.

I had personally hoped that the Soul Cube from DOOM 3 would make a return and be something useful on the last fight. However, what does make the fight, and much else of the game very epic, is the awesome soundtrack. I do miss Mick Gordon, but the new guy has done another great job with the music once again.

But no, after all the build-up the Dark Lord is a good boss fight. Just not a great one.

On a side note, does this feel like the Covid restrictions have had an impact on the development? Yeah. Does this mean Part Two is bad? No.

Part Two is a hefty and wholesome end to the DOOM SLAYER saga for the most part. While the very end did lack the emotional send-off I was hoping for, and while some new additions and the end fight came across a little underwhelming, this is still a load of fun. I do apricate what the developers have made with everything happening now and compared to some AAA games, this is still one of the best things to come out this year.

This is still an epically fun, brutal, and engaging FPS experience that corrects the mistakes of the previous DLC and gives us everything we could hope for in a blockbuster battle with Hell. I am sad to see an end to DOOM for now but must thank ID Software and Hugo Martin for bringing DOOM back and bringing it back so damn well.

I hope Quake is on the cards next, or another studio brings us another DOOM in the future. I would love to see this type of DOOM again, or even DOOM 3 or DOOM 64 for the modern era.

++ Same old epic combat, with even more ripping and tearing
+ Plenty of great arenas, setpieces, story moments, and a kickass soundtrack
+ Some new additions such as the amoured Baron and hammer are amazing
+/- Difficulty is more welcoming - great for newcomers but not so much the diehard fans
- Some new additions aren't so great
- Last boss could have been more epic!

A PS4 review copy of DOOM Eternal and the DLC was provided by the publisher for this review.