After finishing Wildfire, it struck me that there are plenty of games out there that have pretty interesting concepts, yet don't decide to push them far enough. Or take risks to include highly interactive and dynamic elements. Well, in the AAA market that is, but with the indie market, we see there is a thriving hub of creativity and experimentation that if some of these ideas were in a AAA game, I'd have more faith in AAA Gaming overall. Wildfire is simple in execution, pixel art stealth adventure about Wiccans, and a ruthless and corrupted crusade to wipe them out. But there's a neat little twist and it revolves around the power of nature.

Read on to find out more about one of the best games of the year! 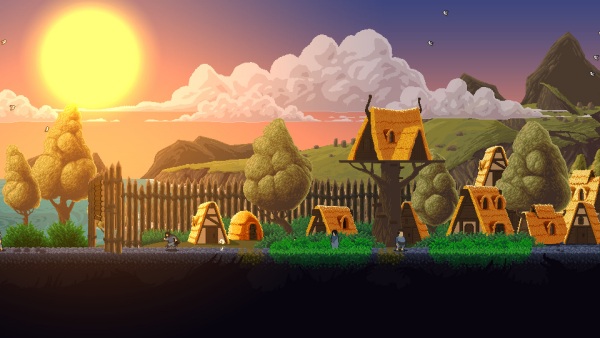 Wildfire puts players into the role of Wiccan who gains the ability to control a number of elements, such as fire, water, and earth after finding a meteorite shard near her home village. However, shortly after, the army of the corrupt and villainess Arch Dutchess arrives and burns the village to the ground. Taking the other villagers as prisoners and leaving you for dead, yet the power of meteorite comes to life and grants you the ability to control fire. Throughout the journey, you'll be granted the ability to control water and even earthly elements such as plant life. With these powers, you will travel across the land to the Arch Dutchess with a choice of tactics, either to use your powers to sneak past and hide from enemies or to crush them with burning fires, icy waters, or carnivorous plant life.

Wildfire pushes itself as a highly creative and interactive stealth adventure (which it certainly is), but it also allows you to be an absolute maniac as well. Players will be placed in a number of locations across the kingdom, with simple enough goals, such as make it to the exit, save a few of your fellow villagers, or cause some destruction to the enemy army looking seeking to destroy you and your kind. 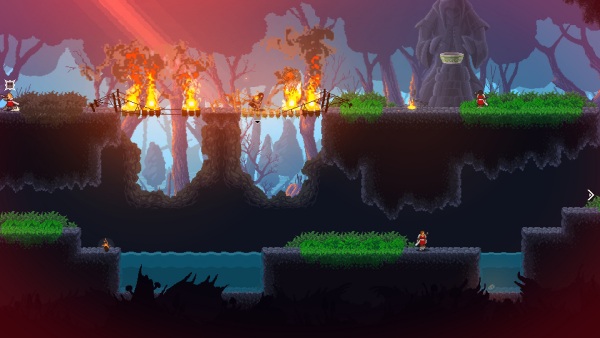 As mentioned previously, Wildfire is a hive of creativity and interesting tactics as you embark to complete a number of objectives that include simply reaching an exit, collecting the stolen remains of your ancestors or rescuing other villagers. These missions take place in a number of terrains such as forests, caves, mountain tops, and within enemy strongholds, so you have plenty of playgrounds for destruction. Or if you're in a not so crazy "burn everything, burn them all" mood then you can sneak through.

You'll have a number of powers such as controlling fire, water, and earthly items, but also sub-abilities within these powers. So you can shoot fireballs to ignite your enemies, but also light a path in a dark cave, unblock wooden obstacles in your path or cause distractions to allow you to pass by. But with water, you can put out fires and torches at enemy camps, create a floating bubble to travel to hard to reach places, or turn a ball of water to the ice, making walls to block your foes from chasing you. Finally, there's the earth which is handier for setting up traps and objects which allows access to other hard to reach places when there's no water nearby.

There's a huge amount of variation in abilities here, with most of them feeling pretty useful wherever you are and giving a good variety of tactics to either help you sneak by or cause some mayhem. Plus, each level has enough of each element to play with, meaning you can replay previous levels and take it on in a whole new way. This is good as there are multiple secondary objectives in each level and playing them multiple times is needed. Why? Well, you get points for the secondary objectives you complete and these points are useful for upgrading and unlocking new abilities. So if you want the most of your powers, then you gotta do some backtracking. Whether it's to save a few villagers, find secret items, not get wet during one level, or by doing one of the many speedruns (some of these are ridiculous). 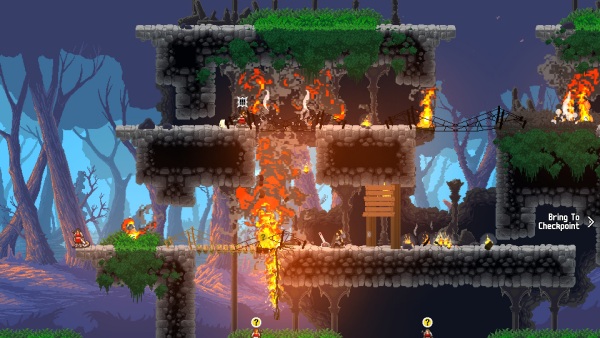 What you can gather here is that simply put, Wildfire grants players a lot of freedom to do as they please, providing they complete the main objective of each level. But to level up and unlock all these multiple abilities, you need to do more. Which I like, as there are plenty of different objectives and secondary objectives to complete, a good variety of setups, such as sneaking through dark caves with little light, running through a den of angry and bloodthirsty Bobcats or one of my favorites, luring a fire demon to a heap of explosives to flood a cavern and kill off a hoard of troops in my ways.

I'm always a fan of games and developers who push the bar of what setups there are, objective types, and changing the structure often to keep you surprised and on your toes. They could've done the easy thing, but went the extra mile to make sure that each mission feels different in some way and it's pacing is constantly going. They also could've just kept it to fire, but including water and earth elements just mix things up further in the best possible way.

What holds it back?

I will say that there are definitely missions that can be a bit of a pain unless you have invested in the right ability. Or backtracking over and over to gather more points you have missed and can now get as you've got that water or earth ability which makes doing a certain secondary objective much easier to do. This can slow down the pacing at times but never to halt it, as you can make it through all levels with even the most basic powers. But having those high-level ones do certainly help out and to get them takes a little bit of extra, and tedious legwork.

There were also some performance issues when the s*** hits the fan and everything is on fire. This means only a slowdown or drop in framerate, but it was still a little odd to see this happen for a pixel art game. But thankfully no crashes and this did occur during the more intense moments of carnage. Plus, this happened on a base PS4. 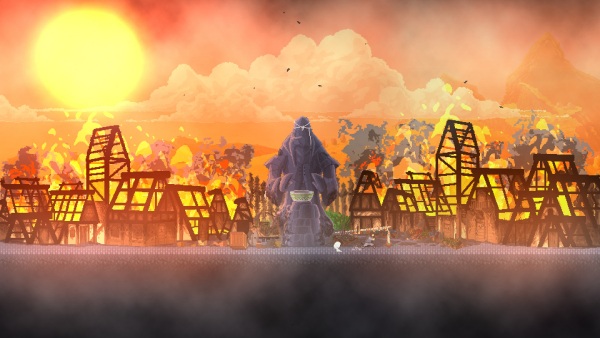 This doesn't stop Wildfire from being a pretty great game. Aside from the powers and the dynamic way you can use them, there are plenty of small touches that make this both a great action-adventure and stealth adventure game. You got the typical elements of hiding in tall grass, causing distractions, and of course, knocking out/hiding enemy bodies to conceal your presence. But there are plenty of things to set fire to, sabotage walkways to disturb enemy patrol patterns, and even to spook enemies by creating epic fires that spread with immense organic detail. This is truly a balanced and engaging experience whether your love action, mayhem, and destruction, or the more stealthily cunning approach.

Wildfire is an impressive game that gives players some pretty incredible tools and an immense amount of freedom to explore, experiment, and concur. While it comes in a small, pixel art package, don't be fooled. There are plenty of dynamic and highly entertaining gameplay elements here on offer. It caters so well to those who love stealth games or those who crave mayhem. Missions structures are inventive and varied, the elemental powers themselves are highly dynamic and create plenty of fun moments, but overall, there is a great level of depth in the tactical side of gameplay.

+++ Awesome and engaging dynamic gameplay with fire, water, and earth elements
++ Great variety of missions and objectives
+ Everyone looks and sounds great
- Some tedious backtracking here and there to get better powers sooner
- Some minor performance issues (on-base PS4)

A PS4 review code for Wildfire was provided by the publisher for the purpose of this review.