Dark Souls has had a mega influence in gaming over the last decade. All starting with Demon's Souls (which has been recently remastered for PS5) the sub-genre of action/adventure has given other AAA developers and indie designers a new lease on creativity. The most recent example is the top-down, pixel-art RPG that also takes notes from 90's top-down adventure games such as Diablo. I take a look at Morbid and ask if we need another one of these types of games.

Well, actually, we do! 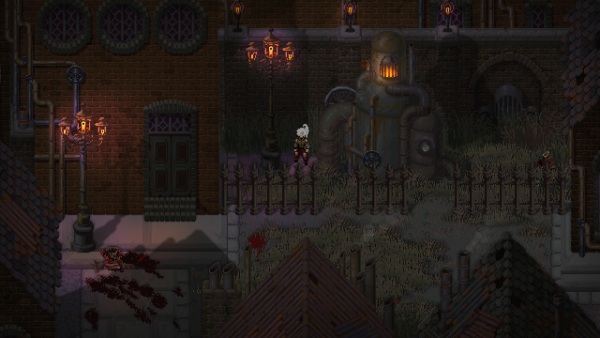 Morbid is the latest in Souls-Bourne-inspired games with elements from some of the best 90's adventure games such as Diablo. As previously mentioned, Dark Souls has had a huge impact in gaming, recently with the likes of Dead Cells, The Surge, and more, where the gameplay revolves around a very simple premise, often taking out some high profile targets, with very little info on what is happening, but the difficulty is ramped up. Only with trial and error, patience, and adapting as you progress, will you conquer your foes and gain exceptional rewards. Namely, you can say you've beaten a really hard game. Plus, XP (user experince) is something that can be taken away in some sense. Basically, often enough in these games, you earn XP which you can use to upgrade your abilities and character progression. Well, if you die, you lose that. Good stuff.

So really, Souls-Bourne is rife with tension, hardship, and great rewards. Just in case you've been under a rock for the last decade.

Morbid is a Horrorpunk (steampunk and horror mashup) tale that blends elements of Lovecraftian/cosmos horror with touches of Cronenbergian gore for dramatic effect. It's horrific, disturbing, gory but it looks so damn awesome!

You are the last Striver of Dibrom. A mighty warrior who is given the almighty task of slaying the Seven Acolytes, powerful beings who have possessed by malevolent deities called Gahars. Basically, monstrous foes who are helping a dark and powerful force ruin the land and the minds of those inhabiting it. In order to succeed in defeating these beasts and all foes which stand between you and them, the Striver must gather powerful weapons, learn new abilities to aid her in combat, and try not to die when possible.

The Striver will venture through multiple areas of the cursed region, slaying those who serve the dark gods that have corrupted the land and ending their region of terror. There is very little known about the Striver and what has happened to the land, following in the same footsteps of Bloodborne, the Striver must piece together the tragic history of the land, who is behind the spreading evil but most importantly, defeat those responsible.

As mentioned, Morbid follows in the same path as the masterful Bloodborne, in both story and style. You play a fallen warrior who awakens to see her brothers and sisters in arms dead on a blood-soaked beach, with little memory of what has happened, but knowing the goal of destroying the mighty and fearful Seven Acolytes.

The set up is something that has been done pretty much to death now, but it's a classic gaming staple of storytelling and one that works so damn well regardless, in the media of gaming. Learning of the world, its allies and foes, lore and even the small details about everyday items used can be fascinating in the right hands. For the most part, about 90% of the writing is pretty solid and engaging. I did like learning of the Seven Acolytes, their woes, the world, and how it fell before the dark power of the Gahars. Even reading the description of some of the items made us feel a little sickly (in a good way), showing the effective and masterful writing found in Morbid.

Although at times, it feels as though the writer(s) goes a little overboard and adds too many elements to the world. While Bloodborne has plenty of items and each with a unique story, they would connect to the world-building and more importantly the grand story at hand. I did laugh at a couple of moments, featuring mutated Brockley and all. But overall, the story, world and even the tragic elements of the Seven Acolytes is very profound for an indie pixel art game. 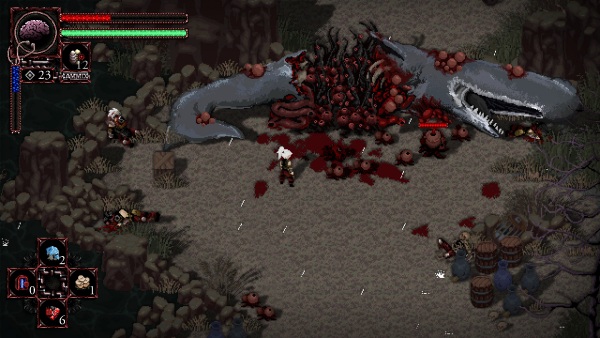 Okay, so the main meat on the rancid bones!

Morbid has all the classic RPG Souls-Bourne (for the most part) elements such as engaging combat, plenty of quests, Upgrades, exploration, and Looting. You start with nothing and have to work your way up by exploring the environment, gathering new weapons, useful items, and above all, XP in order to become stronger. You'll fight an ever-growing line-up of enemies, each with their own attack patterns and weaknesses. The region is huge, broken up into dozens of areas, each with its own enemies, puzzles, and bosses to defeat.

In terms of an objective, it's simple. Go out, explore, gather useful items, and kill anything that's looking to eat you. Defeat each boss, open a new area, move on, and repeat. While sounding overly simple, this format works extremely well and Morbid does offer some interesting ideas of it's own.

Aside from the bleak and beautiful world, there is a system that allows you to find blessings and upgrade them to become more powerful. These include more life, using less stamina, being more deadly to bigger enemies and bosses or simply gather more XP (which is extremely useful!). You do this by killing enemies, completing quests and in return, you gather knowledge. Gather enough knowledge and you get a point. Gather points to use in upgrading blessings. Simple, yet highly effective and fun.

But I hear you ask, "a-ha Patrick, but when you die, do you lose those points and have to get them back?". No. When you die, you don't lose XP.

Now, this is something that might puzzle the more hardcore Souls fans, even to rid all the tension of the game, and yeah it did a little for me. But I like that you still keep your points and everything else resets in the world. Why? The areas can be pretty massive, and rather complicated (more on that later). So venturing through one of the many maze-like areas to find points and potentially die again is not going to be fun, even for a hardcore Souls fan. 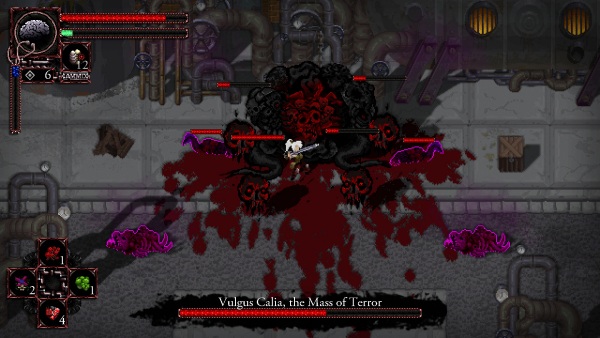 You do instead lose sanity, which affects your impact on combat and other things. So with a low sainty reading, you'll be pretty useless against even the weaker foes. But there's plenty of ways to help avoid that. For instance, all common items will reappear in an area if it resets. This applies for weapons as well, so you could technically farm for multiple healing items and weapons, but the inventory is very limited, so stocking up is not an option. But when in a tight jam, you can simply revisit an area and gather some useful bits just in case. Again, very useful as there is no shop and you will plow through certain items, but then you will have a bit of junk as well which you have to simply dump.

The Striver will also gather Runes throughout their journey, which can be attached to their numerous weapons in order to add Cold damage, Fire Damage, Poison effects, life drain, and much more. Allowing you to custom any weapon for any type of foe.

Stamina plays a big part in offense and defense, as you can roll, parry, sprint, and land heavy attacks depending on your style. I found parrying to be a little useless at times and there's very little feedback on when to parry at the right time for a counter-attack. In general, stamina feels to drain very quickly during some of the more manic fights and the Striver's general walking speed is insanely slow. I felt they could move a little faster and maybe stamina could drain a little less quickly than it did.

But overall, my main feedback is that this is not the hardest Souls-Bourne game out there. In fact, it's fairly forgiving. Is that a problem? No. I actually found it pretty refreshing and even more appealing to those who don't tend to play these types of games often. It still has challenging moments, especially with the bosses, as each one has its patterns and weakness to exploit. But you have to figure them out and this takes time. It actually feels more substantial than a Bloodborne (which is great), which at times just felt like "just hit it with fire and that does the job". But Morbid offers more thought for combat, especially with bosses. Feeling more like a brutal puzzle that needs to be figured out while walking on broken glass. But figuring it out is such a rewarding sensation and does make the job slaying easier. 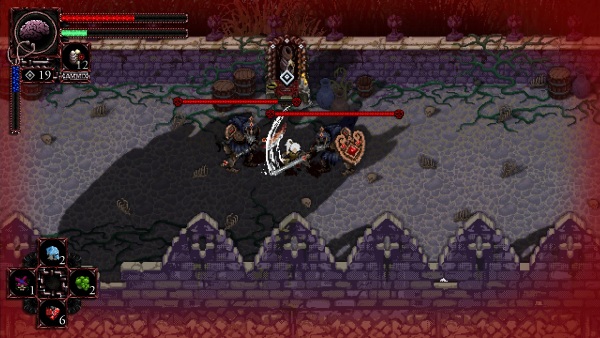 Personally, I like what Morbid does, but on an objective level and if you're comparing it to the Souls' formula, it does take some liberties. It's not massively crushing as many other Souls' games, but I like it's got its own thing going, with different types of challenges and rewards.

While the world is absolutely beautiful, some parts are tedious and irritating to go through. I did find as well that sidequests are a tat annoying to keep track of, as you have to go to one of the many shrines in order to check on what you need to do, and once completed, finding the quest giver can also be very annoying with a lack of map or quest pointers. Again, Bloodbourne keeps things simple. Quest givers are usually in key areas, mostly together and found easily. Morbid just splits quest givers up into far to reach places and with the confusing world design at times, this can be prolonged and even more infuriating just to finish a side quest.

Lastly, travel is another problem as even though you find shrines, they're not points you can fast travel to. When you travel to another area via fast travel, you just start at either entry of that area. So again, it's a bit long-winded, if you simply want to finish off a side quest in the more complicated areas.

The music is amazing. The composer of Morbid deserves praise for such a haunting and beautiful soundtrack that really made this game what it is.

Aside from these annoying aspects, Morbid: The Seven Acolytles is still a terrific game. But one that will divide Souls fans. Yes, it lacks some of the key elements for the Souls formula, but I'm happy the developers did their own thing. Regardless, Morbid is still a beautiful game to look at, has a compelling and interesting world to explore, plenty of great enemies to fight, awesome bosses, and plenty of that RPG stuff that everyone loves. Highly recommend any RPG or Souls fan to check it out!

+++ Awesome world design and visual style.
++ Excellent Soundtrack
+ Solid gameplay and interesting Souls like elements
+ Good story and lore
-- World can be rather confusing to explore at times
- Not challenging in certain areas
Some annoying design choices, such as fast travel.

An Xbox One review copy of Morbid: The Seven Acolytes was provided by the publisher for the purpose of this review.