Cyberpunk is hot right now! Like hot, hot, hot stuff to tackle in gaming. And there's a good reason why. Cyberpunk is cool, edgy, and looks amazing with next-gen having arrived on the scene. But looks are one thing, exciting and memorable gameplay is another. Enter Ghostrunner, a brand new IP from One More Level that brings players into the world of Dharma Twoer, a thankless, ruthless and bleak world where humanity lives in constant fear and suppression. It's up to you, the Ghostrunner, to climb this might behemoth, fighting a legion of crazed killers and super soldiers, in order to bring down the head of the tower, The Keymaster. Can you make the climb? Will you succeed and free the people?

Oh, by the way. One hit and you're dead. 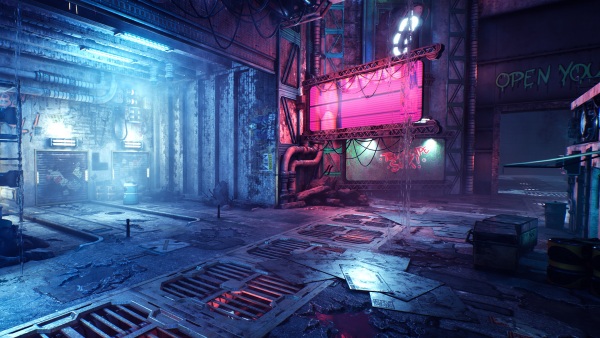 Ghostrunner is described by its developers as "a hardcore FPP slasher packed with lightning-fast action". That's a pretty good summary, but it doesn't come close to nailing the brutality you will face. It is many things. Brutal, unbelievably challenging, a compelling look at combing lateral elements and intense combat with a cyberpunk edge. A game that on face value might seem like something we've seen before, but it has the edge to elevate itself above the rest, namely for its dynamic mechanic where one hit will kill you, but one hit will also kill other enemies in many regards.

The story of Ghostrunner revolves around the mighty climb of Dharma Tower, a cyber-enhanced megastructure that acts as humanity’s last shelter, after a world-ending cataclysm. The Ghostrunner, also known as Jack must climb from the slums at the bottom of the tower to the very top, in order to confront the tyrannical Keymaster. Along the way, you'll learn many harsh truths about your past, how you and your kind were slaughtered, and what is really at the heart of the tower.

Now the story and plot are fairly generic. There's no nicer way to put it. It's fine and well written enough that it's nothing close to terrible fan fiction or something I would've written for the creative class as a hormonal 13-year-old. But it's totally nothing new, nor does it do small things to make itself feel a little different. I mean, you got the "Keymaster" who feels like a knock-off Doc Ock from Spiderman and having a lead simply called Jack is pretty uninspiring. But it's all the same beats as plenty of other games before. Oh no, the Keymaster is unleashing poison gas in Sector 5, go help them. Oh no, you have to destroy the core in order to progress. Oh no "obvious plot twists at the end" incoming.

Yeah, it's pretty damn clear what will happen when it will happen, and why. I'm sure there's a bingo version of story cliches that are done to death and can be seen a mile coming. Again, it's not a bad story, it's just predictably predictable. The world itself is pretty immense, the voice work and character art is pretty damn cool, and overall, it's really the gameplay which is the highlight here, with the story really taking a back seat to things. 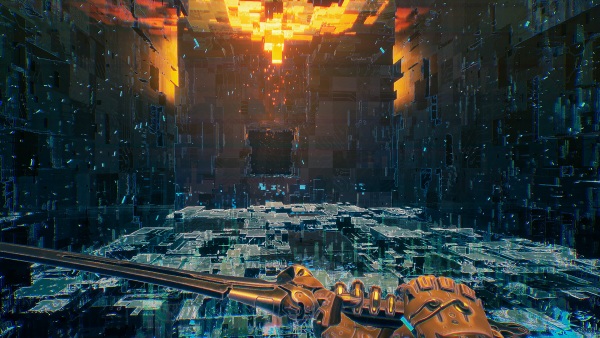 Ghostrunner is a harsh lesson in perfectionism, that requires you to learn fast, act fast, and kill fast in order to survive. Oh yeah, did i mention that you only get one hit before death? This is the main selling point to Ghostrunner, taking on a new level of challenge that will surely make or break people.

It's a formula that even those who love Dark Souls might struggle with, since it's a run, die, repeat situation until you succeed. But behind this formula is plenty of lateral components as each encounter and setup feels a like manic puzzle that will start over if you make a wrong move. Think of it as a deadly and frantic game of chess or an explosive jigsaw puzzle that you must figure out quickly or face starting over.

Ghostrunner overall is a series of these events, that connect together through parkour exploration, platforming, some actual puzzles, and set pieces. While this might seem like a risky, dare I say very troubling setup for a game, trial, and error is nothing new. Take Dark Souls or even games like Inside and Limbo, which require multiple tries before figuring out the solution and proceeding. Ghostrunner does this, but much faster and fluently.

Checkpoints are forgiving, reloading after death is instant and above all, One More Level has developed pretty much all situations to have multiple ways of completion. The level design and layouts to near all encounters had multiple paths and advantages for the player to use in order to take out the enemies before them. In some instances, I didn't need to kill all the enemies or most of them, providing I found a quick and clean route to the exit of the arena. I rather enjoyed and greatly appreciated the level of freedom when tackling many of the arenas and when you do figure it all out, it feels almost godly! 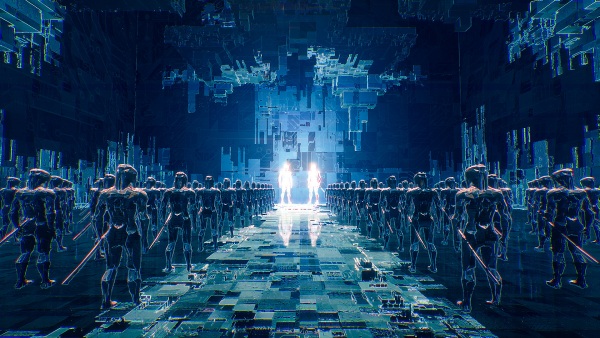 Yes, you will die a lot ... I died a lot. On average for a level, I died about 80 times. But repeating a level to find any loot I missed, made it clear that through all my errors, I learned and could accomplish anything I tackled again swiftly and beautifully. It was amazing when everything clicked when I had the flow and rhythm down to a fine beat and could finish off an arena of enemies with some ease. Some encounters were a bit BS, feeling more like a grindy path of just figuring out the right steps that the developers want you to make. These are very noticable but thankfully only popped up a handful of times throughout the whole adventure.

There are plenty of tactics to learn, new gadgets t acquire, and perks to learn, allowing you to become even more agile and deadly, as the climb gets harder and harder. But the learning curve is not only steep but pretty damn tight at times. Some of the platforming sections that include timed deathtraps and doors can often be classed as an extremely close shave with a samurai sword. Timing is critical and One More Level has made it clear, you need to be precise at these moments, just like with combat encounters. Except, there's less room to breathe.

The platforming and these intense timed events can be fun, but also a little draining, as one wrong move and it's back to the begining. And some of these segments can be pretty long and complex. But thankfully the parkour is pretty smooth, except when you come across a bump in the wall that stops you dead in your tracks! Plus the game never really speaks of momentum or that fact that movement is very kinetic. But this I mean, you have to keep increasing your speed at times, through dashing and multiple jumps to make the more difficult gaps or gain access to the hard to reach places. You have to learn that the hard way, but once you do get the hang of things, it feels amazing.

Now, the one-hit mechanic for the most part works extremely well and One More Level has done a great job at balancing everything from the platforming sections to the combat arenas. Where this mechanic and gaming highlight does fail slightly is with the bosses. Now to be perfectly honest, I think Ghostrunner didn't need bosses really and possibly the developers could've made up some grand, epic set pieces instead. What we get is a good variety of bosses, with different designs, behaviors, and patterns to figure out. But even with plenty of consideration in their designs, they're just dull and require plenty of time and patience, which really does contradict in many ways the fast pace, learn quick and execute quicker approach the rest of the game has. Well for the first boss, there is a switch flip where it becomes absolutely manic and will either piss you right off, or make you feel immensely god-like once you do it.

They're fine overall but just a little tedious to figure out and kill the pacing a bit. But still, the developers did do what they could with such as compelling and tricky mechanics. 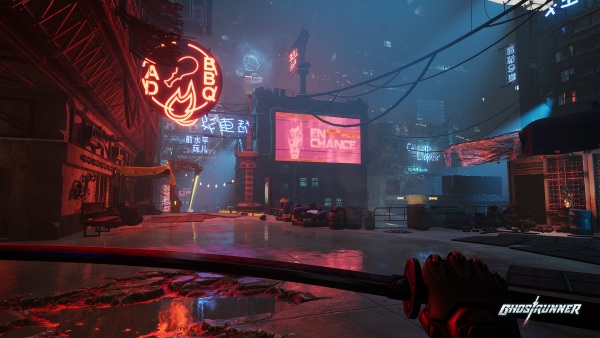 While there are plenty of checkpoints throughout each level, it seems as though the game does not save your progress in a level. So if you quit halfway through and want to come back later. You will have to start the level over again. I only saw that hitting certain points in a level, like after finding an upgrade terminal, will save your progress in a level and nowhere else. This is fine but unfortunately, I did come across a bug in one particular level that involves fans. At one point you need to use fans to traverse massive gaps and after completing an objective, the fans didn't turn on. Meaning I was stuck. After reloading the level twice, did the fans come back and thankfully I had hit a checkpoint which allowed me not to start the level over.

Feedback to the developers would be to have checkpoints save progression for when players need a break from a level and also the fan bug. Also, make the text bigger ..... fine for PC but not console owners.

Ghostrunner has all the right elements to make it an indie cult-classic, but I want it to be so much more. I would like Ghostrunner to be a smash hit and help inspire others as Dark Souls has done for many years now. The developers have taken a risky mechanic and implemented it with absolute professionalism. Ghostrunner is a breathtaking challenge that's frantic, intense, brutal, and very clever. Once it all clicks together, it's a fluent and highly rewarding blast, that never lets up on the challenge but will make sure you feel like an absolute legend once you finish it.

An Xbox One review copy of Ghostrunner was provided by the publisher for the purpose of this review.