What is the greatest thing ever? Startups! Yep, they so are. We live in a great world, don’t we? …. No, sadly we do not. But at least people have the resources and means to bring their dreams to life! Whatever those weird, wonderful dreams might be? Jokes, aside, we seen many companies come to life and bring us such epic advancements in technology and entertainment. But there are also plenty of others which don’t reach the glory of say AirBnB, Uber, Snapchat or even Whatsapp. Many just fade away. But had you ever wondered what happens to all those poor companies? Well, Aggro Crab thought the same thing and now we have the hilarious and colourful dungeon crawler Going Under.

What is Going Under? 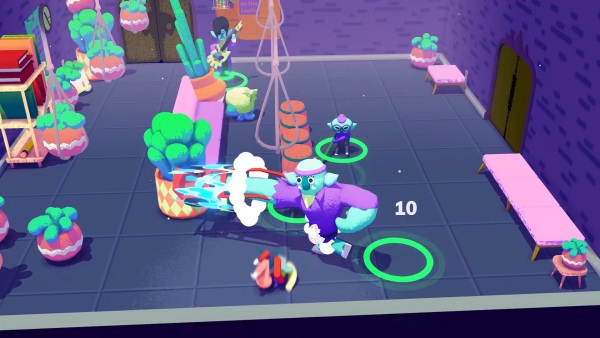 You know what is fun? The nature of start up companies and what some Wizz kid will conjure up to make it big! Now there are plenty of success stories with bright kids and adults making a compelling app or new discovery on the tech scene which helps, entertain, or improve the lives of millions. Them there is plenty of other start ups which fail miserably.

Going Under is a colourful and hilariously satirical look at the bizarre world of millennials spending money and producing wild ideas. Like soft drinks which taste like “New Car Smell” or something like that.

You’re Jess, the new intern at Fizzle, a soft drinks company that specialises in the oddest flavours which people don’t like but pretend too like (like coconut water) and don’t pay their interns in cash but experience. That experience however often results from dungeon crawling through various failed start up companies which are now inhabited by monsters.

Got me so far? Good. You will wield office junk as weaponry, use apps for a host of powerup perks and eat avocado toast for health, as you make your way through the colourful procedural dungeons beneath your Fizzle.

What do you need to do? 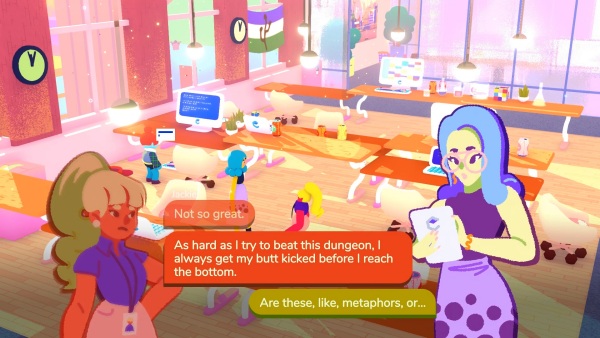 In the world of Going Under, failed businesses sink beneath other successful ones, and their employees are cursed to become monsters. Whether that’s skeletons that love crypto currencies, Goblins who love coffee and organic smoothies or demons who love interior design.
So as Jess, you are tasked with not marketing duties but rather to venture below Fizzle and enter each randomly generated dungeon to battle through the remains of failed start-ups. You will fight with random items scattered around each level of the dungeon, collect currencies to buy new items and level up and acquire powerful perks to make you the super ultimate millennial!

While you partake in ventures below, you can also make friends with the people above in Fizzle/ By doing odd jobs and speaking with for them, you’ll be blessed with new mentors as guides, along with providing you benefits in your adventures. Such as giving you immense soft drinks for powerful one-off attacks, allowing you to acquire new and exciting apps which can change certain aspects in each dungeon. Or even have access to the company credit card, which allows you to buy anything you want but carry debit (in the form of a ball and chain!) with you until you pay it off! That was my favourite.

While this is all happening, you’ll be finding out more and more about Fizzle and their dark, very millennial secrets. Believe me … it’s so millennial! 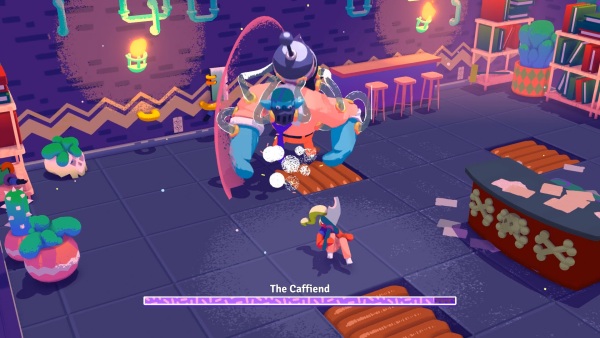 Going Under captures perfectly the nature of start-ups and the millennial generation with a brilliant satirical twist. Every character has an element you can relate/understand with the manic boss who keeps spending money, the coder who hates coding but does it so she can pay the bills, the larger than life flavourist who lives for the pursuit of discovering new flavours or the stressed out head accountant who can’t keep track of all the company’s lavish spending on ice statues.

Every character is interesting to speak, looks and even sounds the part with dialogue being replaced with different toned beeps. There is even one character who looks oddly like a certain Amazon founder who loves money and sending people to their doom …. Not saying anything more.
The world is strangely colourful, with bright colours filling every square inch of the environment. Everything is made from oddly shaped and sized portions, but it all feels natural to the tone and nature of the game. The story is interesting, and the setup (no pun intended) is wonderfully funny.

There are even some great jokes which will fly over some people’s heads, but those who know of Tai Lopez will love what the developers have done with him in Going Under. The dungeons are all extremely creative and each one’s theme fits well within the context of the story/world.
Exploration is simple, yet progression feels immense as you gather new powers and having mentors for different perks will change the game up in many ways. The odd tasks will keep things feeling fresh, avoiding any feeling of repetition or tedious linearity. Bosses are pretty cool and the various of enemies, all adding in different dangers to each combat encounter also kept things exciting. 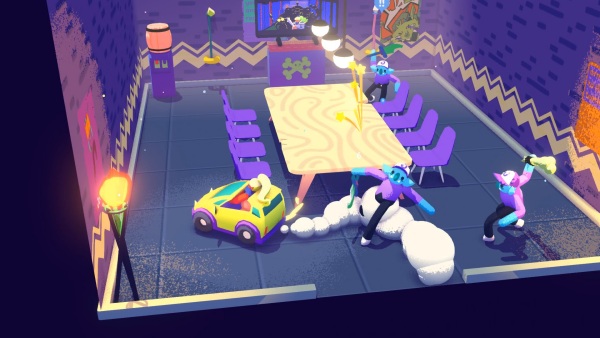 There is not a great deal here which I would say doesn’t work but I felt combat was the weakest aspect in some ways but did have some strong points. There is no traditional sense to weapons as players will pick up any number of objects in the environment, such as computer monitors, laptops, plants, ping pong paddles and more. There are of course actual weapons, like swords, spiked clubs, giant Warhammers, and awesome guitars which electrocute your foes. All having their own level of strength and benefits to each fight.

This is a neat idea, and it does spice up combat for the most part. But there were times when there was hardly anything of use, especially during the later stages of the game. This fault is prominent during boss battles as the game will drop more powerful weapons randomly to keep you going. It does not help that much of what is on offer is plain junk. Junk which breaks easily and doesn’t do anything interesting for combat, aside from being a pain against the more intense encounters.

While I like the idea, there could be more. Like some system which allows you to combine items like in the Dead Rising series. Or even have special weapons or powerups like something from DOOM. The developers could’ve had more fun with the combat but it never really elevates above what we’ve seen before sadly.

Still, combat is fine and with the right perks, it is better.

Going Under is a wonderful gem that should not be passed up. While I have played my fair share of dungeon crawlers, most lacked the charm and creativity to make them special. Going Under is great fun, with excellent writing, immense satirical elements, a great sense of character progression and plenty of neat little ideas which add-up to a fun, frantic and refreshing dungeon crawler.

Highly recommended from us here at Game-News.

A PS4 review copy of Going Under was procided by the publisher for the purpose of this review.