Now music and gaming go hand in hand like music with films, music with festivals, and music with sweaty and disgusting nightclubs. But music has been more important to gaming than never and games such as DOOM wouldn’t be as good without the immensely intense soundtrack. Now it seems like music has become more of a dynamic element for one game (actually there’s two, but today’s review is for BPM – Bullets Per Minute … Wow, such an intense title. I love it).  In BPM, music is the key to survival as each beat of the song playing will allow you to fire and carry out certain actions.

Interesting concept, but does it work? Let’s find out. 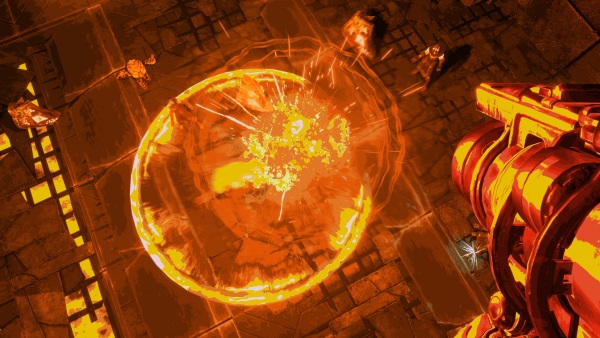 Well, the above is a short summary but here is a longer version, I guess. BPM is a rogue-lite dungeon crawler where the world is randomly generated and all heavy metal-themed. Wow, another one of these? I’ve only played like 10 this year alone so far.

But thankfully BPM has a neat little twist up its sleeve. In order to shoot and complete various actions, you need to follow the beat of the song which is playing in the background. Plus it’s all heavy metal-themed which is awesome! In terms of story, it's kept light. You play as one of five Valkyrie who is tasked with repelling the forces of the underworld to protect Asgard. And do it in style!

Plenty of Bullets and Beats!

So while the main framework for BPM is nothing special, the dynamic element at play is. While most other shooters just allow you to move, shoot, and attack freely, BPM has a couple of retractions and requires players to have both a good sense of timing/planning and quick thinking. See each level has a song and a recurring beat that will show up as the crosshair. Each beat that syncs in the middle of the crosshair means you can either shoot or use a special ability. But mainly this is for shooting.

It does sound very odd at first but once you play BPM and engage with each beat equals an action concept, you’ll find it a solid and entertaining mechanic which is pretty original. I can see people saying, “so it’s like Guitar Hero but with shooting?” and it is a kind of yes but mostly no. Just imagine a lighter version of DOOM that has the brutal combat, action, and music, but your actions rely heavily on your timing with the beat in the song.

Can you keep up with the beat? 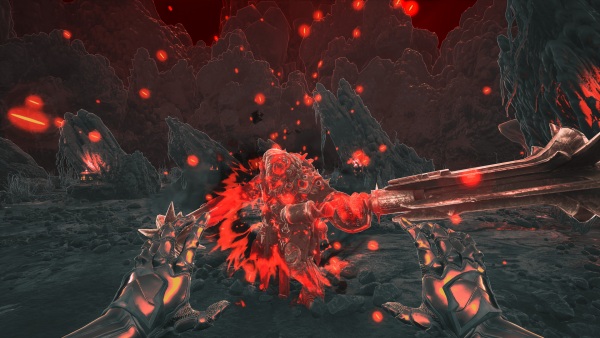 So that’s the general idea with BPM and it’s one that is extremely entertaining once you get the hang of it.

As for the rest of the game, it’s your standard randomly generated dungeon crawler where you enter a series of rooms, fight baddies and collect rewards/treasures. You’ll be able to buy new weapons throughout the campaign, find secret areas that reward you with powerful new abilities and there’s a fair bit of risk and reward with the management of keys and money. You can gather coins from fallen enemies or chests that pop up after an area is cleared. Depending on how well you keep the beat going, the better the rewards after each fight.

You’ll find armoires, shops, challenge rooms, and even banks to store money just in case you die. There are also shrines that you can spend money on to up your attributes such as speed, damage, range, and luck. But more interestingly there are even more powerful shrines which you can sacrifice keys and gain some epic powers. So there is of course those classic elements for these sorts of games where you can either spend your resources as you go, acquiring what you need in order to survive and potentially making it out. Or saving what you have, risking your chances early on, and hoping to gain the ultimate advantage for the end game.

So while it may seem like a generic dungeon crawler/Rogue-lite kind of game on the surface, it does handle the traditional elements well enough, elevating the risk and reward factor to make the journey engaging and with the Beat = Action mechanic in play, things only become vastly more enthralling.

So the implementation of Beats = Action is done well, with songs being catchy and very generous when it comes to pacing/timing. All the songs are terrific and fit well with the world and gameplay. As players get the hang of things and complete more and more actions in sync with the song, does the song get grander and more complex. This heightening the overall experience and making it feel as though your actions flow with the song and enhance it.

The gunplay is simple yet packs a punch for the most part, with some classic weapon types at play, with some more inventive ones showing up later in the game. Firing and even reloading weapons can be a joyful experience as you need to time each shot/reload sequence carefully (i.e shotguns you need to pump, assault refiles need to have the old clip removed and new one put in place). But once you get the hang of shooting/reloading and seeing how in sync you are with some pretty kick-ass song, just gives a rush, unlike many other games. Of course, it can be a little annoying if you lose your pacing and end up just flopping everything until you get back on track. There are those moments and it is a little annoying to see some areas have such high enemy count and you have restrictions while they do not.

I will get that some people might not click with this game and that’s how I felt when I first played it. But once you get the hang of it and when you just click with the beat, it’s an amazing and refreshing FPS experience.

Aside from the core mechanic itself, the gameplay is tight. As mentioned previously, while the other elements are simple, they are executed with confidence and as you progress through each area, the risk/reward factors become more engrossing, the combat encounters grander and complex and even exploration has a fair share of secrets and cool moments. Enemy variations are cool, bosses look and play out well and the inclusion of secret rooms, powerups, mini-bosses, challenge rooms, and level modifiers (such as slippery floors, low gravity) will keep each venture into the underworld massively varied and enjoyable. 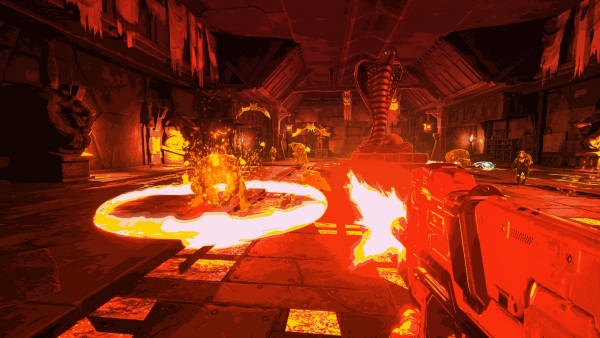 So as a dungeon crawler with randomly generated environments, you will see plenty of times where your odds plain suck. I feel this is a big problem as the core mechanic can for many users, take some getting used to. My first hour was brutal and every area generated just felt overly difficult, considering that your starter character barely takes 4 hits before dying and if you don’t get anything like a better gun or powerful perk (i.e unlimited ammo/speed boost) then progressing and unlocking new and better characters will be slow.

But thankfully, after an hour of playing BPM did more rooms with perks and better starting gear finally appear. I was able to use to money saved at the bank and the loyalty scheme at the shops start paying it forward. But a game of this nature will have plenty of bad runs and plenty of good ones. For me, it started bad, and was pretty tough to grasp such a neat mechanic as the beat = action one.

Otherwise, it was a little annoying to see certain songs be replayed throughout the campaign. It doesn’t seem like each level has its own unique song, nor does the beat/pacing increase from level to level (massive missed opportunity there).

But the biggest fault is with the visuals. I’m not sure why but the developers must love over-saturation and it can be painful after a while. The environments are okay in their designs, nothing fancy. But the over saturations of greens, reds and blue can be rather annoying. No idea why it looks like this.

That all said, it’s great to see the developers offer multiple game modes and characters as well. So you can replay the game with a retro filter, explosive mode and more! Plus they’re planning on adding more … if they make enough money! So I think we should all help out and buy BPM. 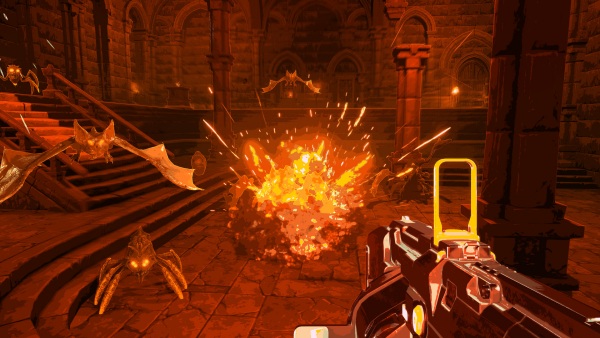 Bullets Per Minutes is an awesome game and one of the best of the genre I played this year. While there were a couple of things that hindered the visuals or progression of the game, I simply love the idea of playing the game in sync with the music. The action is solid, the gameplay elements all gel together to make a compelling and entertaining dungeon crawl, along with an awesome soundtrack and plenty of modes and characters to play as. BPM is one of the mode interesting shooters of the year and offers a visceral and dynamic experience for those who love shooting, heavy metal, and quick-thinking with a good sense of rhythm.

So get your headphones and rock/shoot to the beat!

+++ Neat core mechanic with shooting in time with the song's beat
++ Solid and fun exploration, risk/reward factors
+ Plenty of variation and gameplay elements
+ Awesome soundtrack and plenty of extras

- Random world design can harm the learning curve for some
- While awesome, it needs more songs
- Visuals are eye-melting (not really in a good way)

A Steam review key of BPM: Bullets Per Minute was provided by the publisher for the purpose of this review.

BPM: Bullets Per Minute is out on Setember 15th for PC