Now occasionally in gaming, we have something that seems massively ambitious and could quite possibly be a game-changer. This generation of gaming has seen smaller indie titles making a big splash, but nothing has been revolutionary. Many AAA games have been fine or even great, but nothing has refreshed many formulas being repeated over and over. But that might change with a rather compelling concept brought to life by former Ubisoft/Assassin’s Creed developers.

Can Ancestors be a game-changer? Will it help inspire others to take such daring risks?

What is Ancestors: The Humankind Odyssey? 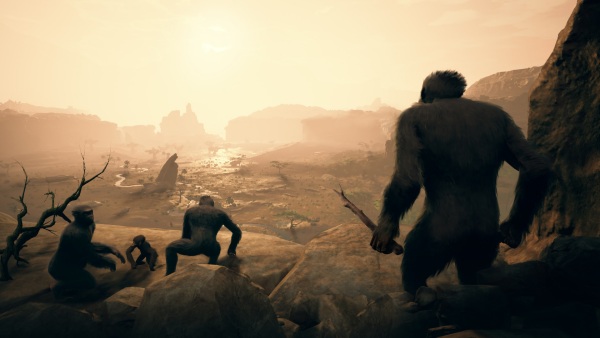 Ancestors is the story of life, or very much the beginning of it. We are taken back to the dawn of humankind and at the start of our evolution. Players will take on the roles of numerous primates with the goal of ensuring their clan’s survival. As each day passes, the player will learn, adapt, and survive the harshness of the world before them. But with each step taken, the player’s clan will adapt and begin the next stages of evolution.

It’s a rather fascinating concept, which takes players onto the ultimate journey of survival and where survival feels majorly important in the grander scheme of things. While there are plenty of simple things found in survival games such as eating, drinking, and avoiding enemies, there are also thankfully more layers to it. There are elements of socialising, learning, and adapting in order to expand the clan and thus ensure survival and evolutions.

Ancestors doesn’t mess around when it comes to the experience and surely the developers at Panache Digital Games have done a great job.

The world is extremely dense and highly organic, living, breathing, and harbouring many wonderful and dangerous things. As primates, players can climb trees, gather resources, and even combine items found to make new ones. With each event and action complete, the player will unlock tiers of their evolution and learn new things as a result.

Finding a branch and a stone, for example, will allow players to make spears and use these to fish in the rivers/swamps to fending of dangerous foes. Completing these actions will unlock new traits and experiences to acquire and complete. Ancestors does incredible at times when it comes to learning, adapting, and rewarding players for their actions. It was an amazing feeling to have discovered how to make a spear and fighting off a dangerous panther than appeared shortly after.

But aside from fighting enemies and finding food, there is the social elements as well. You’ll be managing a clan of primates and it’s up to players to ensure their survival and expansion. At the start of the game, players will be in a safe heaven with others. But it’s up to players to venture out and expand, thus ensuring evolution. You will also be responsible for procreation, by finding a mate, charming them, bounding with them, and getting down to business.

While at times things might be overwhelming to learn or figure out, Ancestors does feel quite rewarding when you do figure it out. You do get objectives to follow, but players can go out and do as they please for quite a few activities such as hunting, gathering or plain monkeying around.

The main objectives revolve around finding lost younger primates, hunting for food, finding a mate, and fighting enemies out in the wilderness. While they might sound that compelling, they do offer an immense level of challenge and figuring out at times! This is great, although certain factors do lessen this experience and the sense of reward sadly. 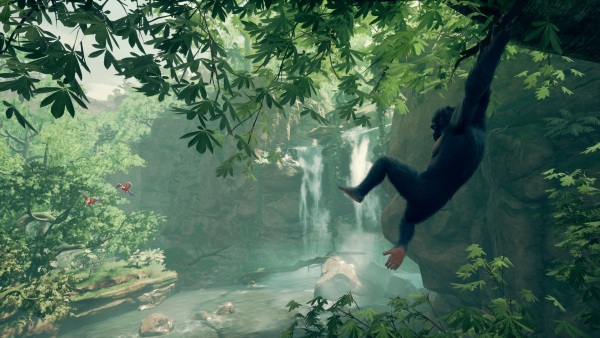 Now the world of Ancestors is a dangerous one. That’s an understatement. The world will literally eat you alive if you take a couple of wrong steps. Your primates will suffer injuries if they fall down off a tree or are attacked by predators, which could result in bleeding damage, poison or just being eaten alive. Players will progress through to new areas where they will encounter other primates, resources, and of course new dangers.

Players will need to use their senses from sight, smell, and sound to deduce what lurks before them. Whether that’s a new resource or a king python looking for monkey meat! Fear plays a massive part in exploration and if you don’t come to your sense and become aware of what is around you, your monkey will soon become hysterical and venture off by their lonesome. But intelligence is also a vital key for survival and the more you learn, explore, and adapt, the more you’ll become accustomed to the world and ensure your survival.

It’s all very neat and the developers have done a great job at cementing these ideas into a rather enthralling game. There is even a permadeath system in play with the Clan of primates you manage. If all clan members die, it back to the beginning for you as extinction is a real bitch in Ancestors.

But there are some things the game needed to do in order to evolve into a possible game-changer. 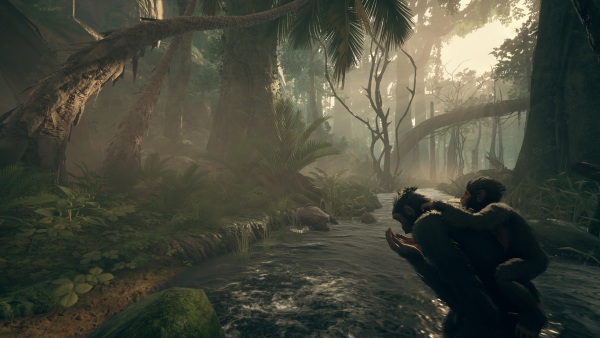 For starters, partner AI is terrible and if you are trying to find a mate out in the wilds, then you’re going to likely have a bad time. My experience revolved around exploring the world for about an hour, finding a random primate, and bounded with it. Soon after, we were attacked by a King Python (which came out of nowhere) and my new partner sadly met their demise. But only after did this python decide I was now it’s mortal enemy and followed me to the ends of the earth… Yeah, it really didn’t like me.

I had another instance where I and my partner came across an alligator and wild hog. Thankfully, the alligator killed the hog but decided to still come for us. My partner just would not run for the trees and instead kept fighting the alligator …. For what felt like 45 minutes of going nowhere. So, I had to abandon them. But throughout this ordeal, the Alligator was just a brutal and relentless foe that kept following me, no matter where I went. Even climbing to some branches above the swampland did not seem to ease him off, only when my partner came in and decide they had a death wish did this alligator’s attention go elsewhere.

So, two big problems, the enemy AI is brutal, like just relentless and not in keeping with what nature would say about these creatures. Most animals would attack or kill to feed, but most animals in Ancestors would rather kill because their all sickos who love killing for pleasure. It doesn’t seem right for the AI to be this aggressive, even more so if they’re killed something else and have food. 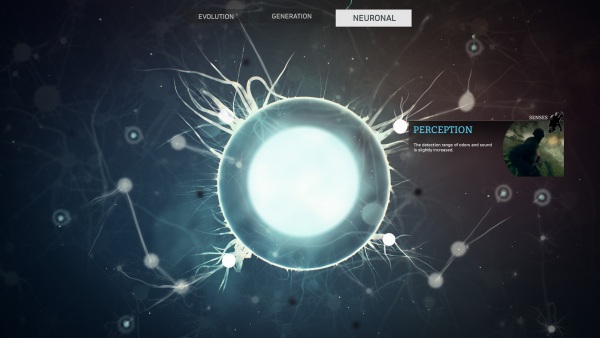 Also, the partner AI is awful and often has a death wish and more so at the worst times. You can communicate in a sort of way with others but you can’t simply command them to useful things and even when you can lead multiple partners in a group and have some commands, they tend to do their own thing and often enough get in danger or die.

This does get in the way and becomes a problem when you get quite far into the game and realise that this game has a perma-death system in play.

It doesn’t help that the world itself and the aspect of sense can be overwhelming and simply just exploring can be tedious and outright annoying at times due to the effect of fear, mixed with having such aggressive enemies and a world that is beautiful/interesting but extremely dense and at times difficult to navigate. These things do mount up and make Ancestors a compelling yet extremely infuriating venture.

I felt like it was a process of two steps forward and one big step back. But with each bit of progress, the game would punish me or push me that step back in the harshest way.

But remember the good!

While these are major problems that heavily impact on progression, the whole idea of Ancestors is fascinating and as a survival game, it has a great framework, ideas and sense of risk/reward which can be utterly compelling.

Ancestors: The Humankind Odessey is an immense concept with some truly engrossing gameplay elements that should be noticed and praised for. I love the importance of exploration, learning adapting, and surviving and how it led to some amazing moments I truly felt rewarded, but also how I should learn from my mistakes. But on the flip side, the game feels truly unfair at times and not always due to the mistakes made by players. The overly aggressive AI, overwhelming density to the world, tedious backtracking, and awful partner AI really does hold back what would otherwise be a truly breath-taking game for this generation.

But I do admire this game for many reasons and would love to see Panache Digital Games bring us another installment or something new in the future.

+ Some great and immersive gameplay elements

-- Immensely difficult and unfair at times

- Can be tedious and relentless at times of progression