So it’s just the norm to have retro classics reborn or simply brought back from the dead to modern hardware. This usually comes with the praise of die-hard fans and those curious on the old ways of gaming. Also, it makes plenty of money for publishers! Just look at Nintendo and how they do things. Now comes Ultracore, a game I’ve never heard of before and for good reason. Ultracore was a game that was made back in 1994 and planned for release on multiple consoles, however at the 99% mark, the game was cancelled by its publisher!

So this is a rather special instance where we get to play something completely new yet completely retro! Let’s see what Ultracore has to offer. 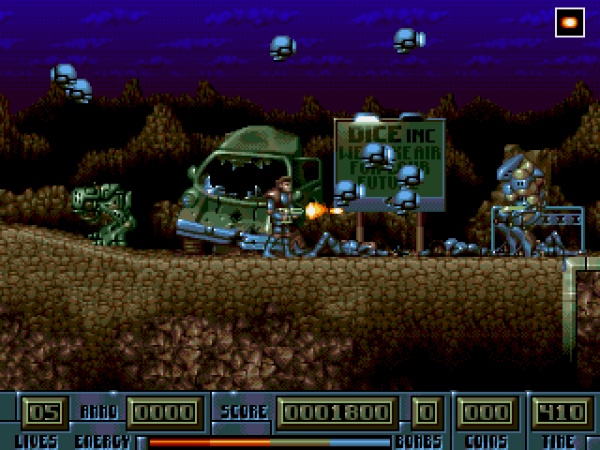 Ultracore (originally known as Hardcore) is a game that represents everything great about the 90’s era of gaming. The 16 bit era was magical, giving a stage to some of the best gaming series of the 90’s and reviving others from the 80’s. But there were also some problems and issues that stand out like a sore thumb nowadays.

What you get here is a big guy, with big guns and fighting an alien menace whose ultimate goal is of course, the destruction of the human race, taking over the universe and all that jazz. So you might be getting Contra 3: Alien Wars vibes from this and yeah, there are definetly plenty of similaraites in the visuals department.

Gameplay wise, there are quite some interesting mechanics at play to make it slightly different and also make it stand out from the hordes of retro rebirths we get today. Indeed, you will be blasting your way through an army of aliens, in massive maze-like levels which span in different paths as opposed to the generic linear tone many games had at the time. So there’s blasting enemies, finding key cards, pressing buttons to open doors to new areas, secret areas and just a general onslaught a alien blood and mayhem!
So it may sound like what you’ve played a bunch of times before, but there are some interesting ideas here. 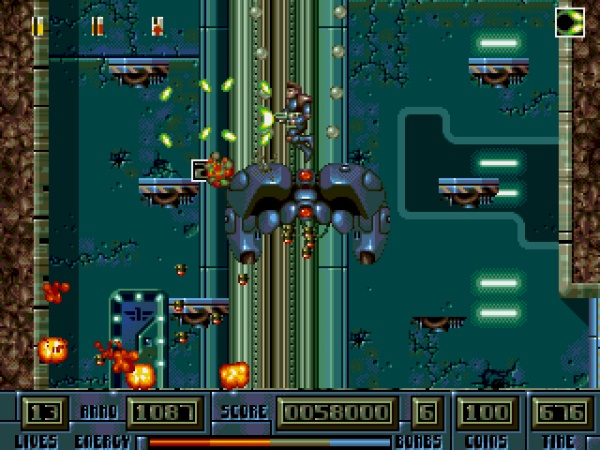 So the action and combat is pretty solid, if not a little manic at times. I did enjoy Ultracore as a visual and visceral experience, combining everything that popular in the 90’s with fun combat, nicely drawn environments, a hunky hero doing what they do best and all that jazz!

The sense of adventure and exploration is pretty top notch, as every area has a secret or two for you to discover. You’ll be collecting coins which you can purchase items with (pretty ahead of it’s time in 94!), which will only push your sense of adventure and discovery. While there are only 5 levels overall, they are immense in size and will give you plenty of running around, gunning and finding that sweet secret loot!

So Ultracore does a banging job at giving you tight combat for the most part, awesome exploration, some neat functions such as buying goods to aid your adventure and being visually pleasing. 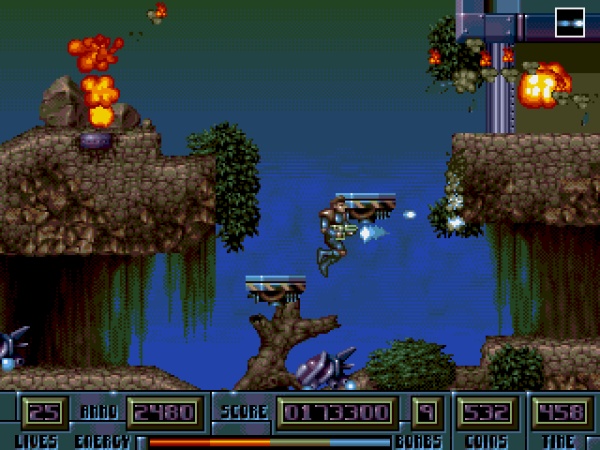 So enemies for the most part a little uninspiring. Even for 94, the line up isn’t too impressive but not bad in any way. While at this time we had games like Contra 3, which while taking lots of influences from other sources, does give us some visually awesome designs and sprites. Metroid, Alien Soldier or the immense Gynoug which has some awesome character/monster designs. Maybe because we’ve seen so many games like it, but Ultracore doesn’t push the envelope with it’s creature designs.

It’s also not so great that there’s no save feature and that controls are a little clunky. Winning combo, considering this can be a pretty tough game at times. But if you fancy doing an epic run through the game, then there’s a healthy challenge here.

Ultracore is quite a treat for a gamer like me and would be for anyone else looking to see what the 90’s had to offer in 16 bit gaming. While there are some tropes and issues which hold it back a bit, there’s some great ideas and execution overall. The combat is really fun, the visual looks nice but above all, the sense of adventure and exploration is really awesome! While there is not proper save feature and the controls are a bit rubbish, these won’t hold you back from experiencing an otherwise amazing blast from the past we never got to play.

A PS4 copy of Ultracore was provided by the publisher for the purpose of this review.