I’ve played quite a few rogue-lite, randomly generated dungeon games in the last few weeks. Most have been fine, not reaching the same level as Dead Cells or The Binding of Isaac. Yet Undermine could be the one that will change things and be top of the crop. 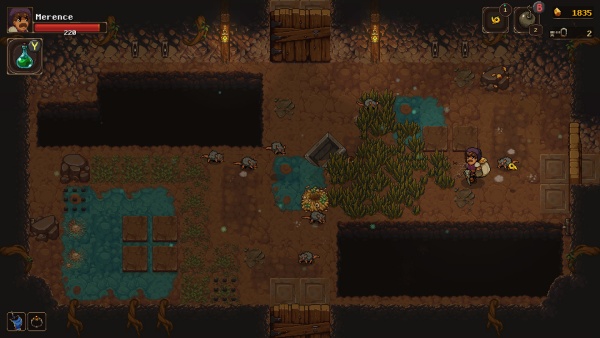 Undermine is the tale of a legion of explorers, determined to venture deep into the darkest parts of the underworld, discovering long lost Kingdoms and finding the ultimate of riches. However, there are things in the darkness waiting for your arrival and a sinister plot involving dark forces arising for total world domination. So with the aid of a grumpy and wise wizard, the many explorers, otherwise known as peasants to the wizard, will chip away at the dark forces, collect as many riches as possible and destroy the ultimate evil.

The setup is pretty good, with plenty of charm and an interesting, if not typical fantasy epic setup. You play as the many, many explorers taking part in the quest and the interesting dynamic here is when your current explorer dies, you take on another. While nothing is really done with this concept, I do like the idea of being a new explorer upon death. It makes the repetition and repeated ventures through the many layers of the underworld feasible and somewhat different from many other games in the genre.

I would say that while the game is visually very nice, the setup pretty neat and the cast of characters having a good level of appeal, the general theme is a little dull. There’s not much here to separate it from many other fantasy games such as Chasm, Children of Morta, and the likes. At least Dead Cells has fascinating lore and a really compelling world design with many visually distinct and interesting locations.

I will give credit for the cool environments and enemy variation here, it’s just the general look and feel is nothing new, but fine none the less. 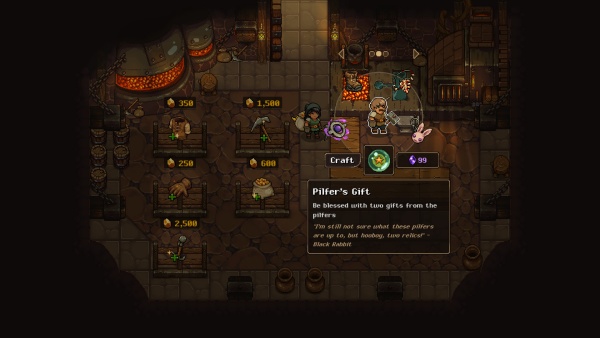 The gameplay is solid, with players exploring a vast number of levels to each region of the underworld, from gold mines to long-forgotten kingdoms made from fire and lava. You will go out, explore, find precious resources and riches while fighting a large variation of enemies and collect sweet perks that will help you either to fight better to explore better. Every time you fall in battle, your character dies forever (oh no!), but not to worry as they’re easily replaced with another explorer who carries over all the perks and upgrades unlocked from the previous one.

Each time you do die, you’ll end up back at the hub area where you can unlock shops, upgrade your gear with gold found in the underworld and discover new characters who add more elements to the story. There are quite a few things to discover, from characters who allow access to shops in the hub area, cute dogs that you can pet (sadly not company you on the adventure) and important gear, relics, and potions that will help you progress further and further into the underworld.

The main idea is to go down, explore, fight, die, and repeat in order to gather enough resources, discover new characters and objects that will evolve the story and enhance your stats overall.

Now this being a rogue-lite type of game, there will be a fair bit of repetition, some grinding, and repeated playthroughs of the same environments and situations. However, Undermine does a very good job of keeping each venture into the underworld feeling fresh, interesting, and fun. Pacing, for the most part, seems pretty good and fair, allowing players to obtain enough gold and other resources to level up within a short amount of time. Plus, there is plenty of helpful items on all playthroughs that you won’t be left with anything to your name. It is pretty annoying that you do lose a chunk of gold and all relics/perks upon death, but you’ll be able to afford upgrades to lessen the impact of death early on.

Plus, you’ll find so many perks that allow you to walk on air, walk over spikes, set fire to enemies, deal more damage, and so forth in each playthrough. But what makes Undermine one of the better rogue-lite games is down to a couple of things. First, Undermine will give you golden opportunities to earn some easy money. Collect certain items in a run and you’ll unlock a special perk and earn quite a bit of gold.  Such as combing the Adventurer’s Hat and Wipe to make the Golden Idol. This came out of nowhere and was a nice surprise as it helped a lot. Most other Rogue-Lite games focus too much on grind and with a title like Neon Abyss, I found the grind unbearable. Undermine does a great job and making sure progression is evenly paced, things are kept interesting and you level up accordingly. 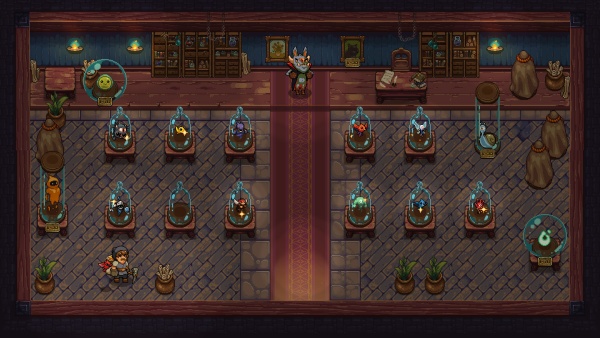 There are very helpful perks in the game too that allow you to lose no gold at all which is extremely nice, considering many other games like Dead Cells will punish you mercilessly upon death, no matter what.

Also, the world keeps evolving, and old areas on repeated playthroughs will show small, but interesting changes. Such as new enemies, new discoverable rooms, and even story elements.

There are plenty of risk and reward factors including blessings/curses, exploration and even deciding whether to keep items such as keys and bombs for later on, in case you can find the sweetest of treasure rooms. Blessings and curses were quite interesting, as you can gain a positive effect like more health, but be plagued with negative effects such as less damage given on your character. You can remove curses and for most of the game, there never were moments that it felt overwhelming. Aside from one from the boss that can potentially give you a dozen curses which was just ridiculous.

Speaking of bosses and combat, everything is pretty solid if not a little basic at times. Undermine has combat which is simple, fun, and pretty flexible when it comes to perks and blessings. It is pretty simple that you can’t even dodge in the game or get new weapons or sidearms. You do have bombs, which are great for destroying certain obstacles and against enemies and also have different and fun varieties. But much else is really basic only gets some injections of fun with some of the perks you gather. Bosses are definitely a highlight being epic in scale and all very memorable and engaging.

Undermine is pretty awesome, with a wholesome, engaging, and fun adventure to take part in. It’s definitely up there as one of the better rogue-lite games and offers a balanced, enjoyable, and rewarding experience. I have tallied up about 30 hours having unlocked everything, so this definitely great value for money.  While the combat is a little simplistic and the general theme a little lackluster, it’s exploration, progression and world-building is pretty awesome and will entice and grip any keen adventurer. Definitely worth picking up today!

++ Progression, risk and reward and exploration are awesome
+ Visually pleasing
+plenty of adventure
- Combat is a little simplistic for the most part
- Generic RPG theme and style

An Xbox One copy of Undermine was provided by the publisher for the purpose of this review.