So I came across Crosscode and at first glance, it seemed to be another run of the mill pixel art, fantasy, and adventure game. But when I took a closer look, it seemed to be so much more. I was also told if I liked old school Zelda games, I would really dig this. This was clearly an invitation to try out this charming little title and to scratch that Zelda itch I’ve had for quite some time (I don’t have a SNES mini sadly). Would I be in for the surprise of my life, could this indie title capture the magic of say Zelda: A Link to the Past (one of my favourite games of all time)? Well, let’s find out. 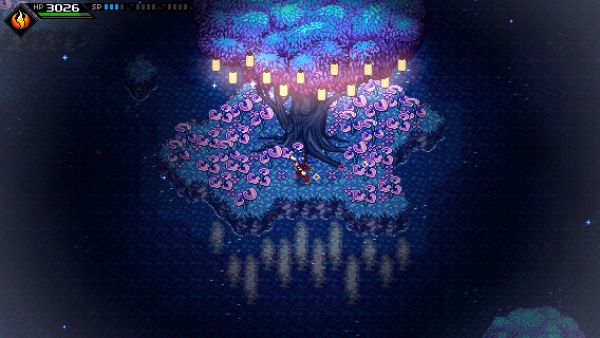 Crosscode has a pretty neat setup, is that you play as an avatar named Lea, who finds herself within an MMORPG (Massive Multiplayer Online Role-Playing Game, if you will) called Crossworlds. However, when you awaken on board a large ship that takes players to the world of Crossworlds, you as the avatar can’t remember anything at all. The only thing made clear is that behind your arrival is a tragic tale of loss and betrayal. But not all is doom and gloom as you are greeted by a number of people in the game’s world who need your help and in return will aid you in the journey to finding out Lea really is. Sadly Lea can’t speak, so that doesn’t help matters now does it? Also soon after your arrival enters a mysterious and antagonising figure looking to capture you for unknown reasons. After an epic fight with a massive Crab like creature and a neat escape from the ship you are on, you find yourself in the world of Crossworlds where the goal is simple; Find the four accent powers and claim the grand prize!

Along the way, you’ll make friends, learn to speak new words (this was a cute sense of character progression in the story), complete four epic trials that will reward you one of these accent powers and discover the reason why you are there.

Crosscode is extremely charming, with an abundance of lovable characters, a good sense of mystery at the heart of the story and while, not wholly original, the world itself is pretty interesting and the setup is solid and engaging throughout.

I did find the first couple of hours to drag a little bit with a tutorial that offers quite a bit to engage with, a slower start to missions that build up over time and there being plenty of dialogue exchanges that made me feel I was in a game by Hideo Kojima! But once things get started, Crosscode does deliver the goods! Once you reach the first main dungeon of the game, you’ll see a change of pacing with more interesting side missions, more compelling developments in the story and overall the charming characters and mystery just kept things rolling and evolving until the very end. 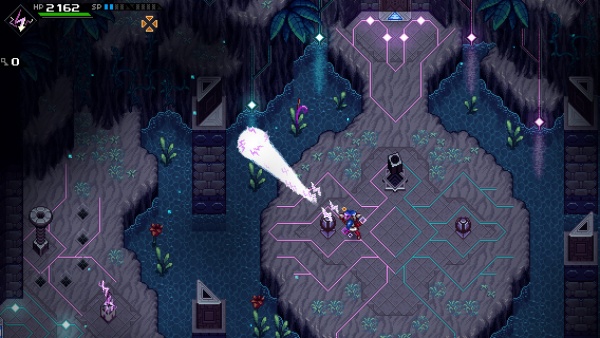 Crosscode will feel very familiar to those who’ve played the old Zelda games, but for those who haven’t, then I’ll explain. Crosscode is a top down adventure game that reminisces 16-bit era adventure games. Set in a massive open world made up of different areas, the world of Crossworld is vast, diverse and a ton of fun to discover. You’ll start in the Rookie Harbour but soon move on to other locations set in beautiful autumn forests, cold and dangerous mountain tops, sweeping deserts and neon drenched cities. Each area has its own type of enemies, rewards and terrains you can interact with.

Some of the most compelling aspects to Crosscode’s gameplay are exploration and Problem solving. The world of Crosscode is simple in structure and thus easy to navigate through. But the world is broken up into multiple sections, with each hub filled with bite size areas. All these areas are filled with enemies, tasks and rewards to obtain. You’ll see there are different levels of terrain in each area, which poses a challenge in itself. Players will have fun exploring and figuring out the right paths to those all-important high spots in order to obtain the sweetest of loot.

Some of these environments can be rather taxing at times, depending on what the scenery is. Areas with snow were the most difficult to tell the difference in terrains. But most environments have good visual clues and were fairly clear in how they were layered. Overall, the world is fun to explore and a puzzle in itself, as a good adventure game should have with its world.

What also worked extremely well were the actual puzzles themselves. From the early stages of Crosscode, it was clear that puzzles were bringing interesting dynamics and intriguing complexities to the journey. These neat touches and twists made them tough at times, but mainly they were extremely engaging and rewarding once accomplished. The core of problem solving revolves around one of your main weapons, which shoot projectiles at any objects nearby. These projectiles can bounce off multiple surfaces and keep going to hit certain targets if angled correctly. There are a ton of variations with this mechanics/puzzle type including new forms of projectiles that give out different effects. Such as fire based projectiles that will melt ice, explode mines and even push movable objects. There are combinations of all these elements to create situations where you need to make a pathway, apply pressure to the button which opens a doorway and so much more.

But there are other setups as well, including quizzes, key finding and looking for hidden items with a tracker. These are all handled very well as they often included neat dynamics and complexities in their resolutions. Simply put, Crosscodes will offer you multiple brain teasers and those who love puzzles will be in for a real treat. 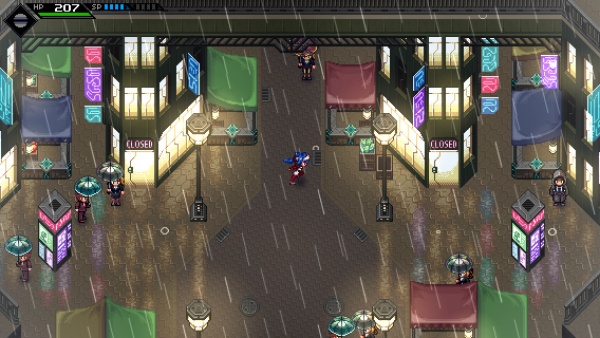 Combat is also pretty strong, despite having a slow start. As mentioned the first couple of hours are a tad bit slow and you won’t have the good skills or range of attacks until the first dungeon. So it may feel repetitive at first, but soon enough, you’ll obtain a host of powers that really does spice up the combat. From amazing dash attacks, long-range projectiles that set enemies on fire and powerful blasts that obliterate everything within a 10-meter radius, there’s something to change up the combat and make it enthralling throughout the journey.

Some of the main highlights are with the epic Boss battles that will surely test your reflexes, prior planning when it comes to gear and load-outs, and quick thinking. Each main boss is an event that offer spectacle and a compelling challenge. The enemy variation is a little simple for the most part and again, it takes quite some time for the better, more interesting ones to appear.

But character progression is extremely satisfying as the multiple skill trees for new perks and powers are immense with a great deal of variety. There’s a great level of depth with stats and effects, with a neat range of foods giving your health, buffs, resistances and more. Everything is easy to digest and after a few hours you’ll be fully in tune with the mechanics and stats this game has to offer.

Side quests are present throughout the journey and plenty are fine, with some neat exceptions. Some of them are game theme related with tasks revolving around things such as QA testing. Overall side quests don’t differ or feel more advanced than any other RPG game and could’ve been bolder with the themes and all. Usually their just the same as any other RPG with fetch quests, races, or venturing into a cave filled with monsters. But mainly they’re fine and service the progression well enough. 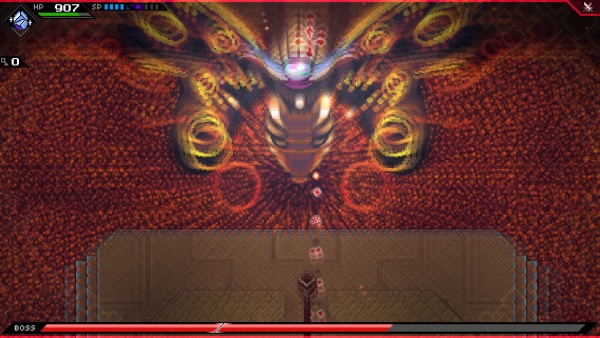 Crosscode is an extremely charming, engaging and fun-filled adventure that anyone can pick up and enjoy. If you’re an old school Zelda fan, this is definitely one of the finest games that capture the same essence that made those games great. Plus it adds in some interesting dynamics, RPG elements and has a pretty good story. Crosscode is a must-have for your adventure collection!

A PS4 review code for Crosscode was provided by the publisher for the purpose of this review.

By the way! Crosscode is available through digital stores such as Steam and PSN. But Crosscodes is also being sold through multiple physical editions, including a Standard, Steelbook, and Collector’s Edition.

You can order yours via the following link – https://crosscode.inin.games/