Now, I’ve never heard of this legendary side-scrolling shooter before and you’d be forgiven if you’ve not either. Considering that the Darius franchise for the most part has been locked to only Japan, until now! There have been a few titles repackaged in the early ’90s, but these are extremely difficult to come by unless you have the game and the old consoles. But for those who fancy a blast from the past, intense side-scrolling action that only the 90’s could provide and several top titles in one package, then look no further. 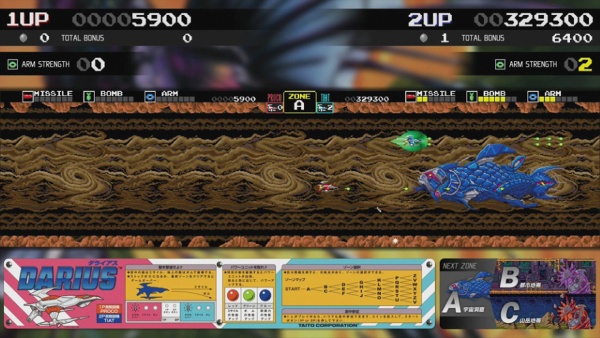 The Darius series is a thrilling set of Sci-Fi themed, side-scrolling action games, where players will take on the role of a fighter pilot manning the epic fighter spacecraft “Silver Hawk”. The mission, traverse through a wide range of environments and battle a strange alien race for the salvation of the human race.

It’s mostly the same as what you get with any number of side-scrolling arcade shoot’em ups. There are pretty visuals, lots of action, plenty of enemies to kill or be killed by (and in most cases be killed by), and a wide range of weapons, power-ups, and bosses to tackle.
This collection includes Darius Arcade (original version, new version, extraversion) Darius II (Dual Screen version) SAGAIA (version 1 and 2) and Darius Gaiden.

What makes Darius any different?

This collection focuses on the Arcade releases in the series, and these were the most interesting out of the entire series through the ’80s and ’90s.

The arcade games were known for implementing certain features which really made it stand above the rest. Originally, many of the games while in the arcades (yep, you got to be at least 30 to remember arcades) had multiple screens and this was pretty thrilling, giving you a tactical advantage but also increasing the number of enemies on screen.

While this feature may not be present on the console releases of the Arcade Collection, the games sure to do look really good considering. The conversion over to console hasn’t caused any damage to the presentation and there’s a wide range of options to optimize the game’s outlook whether your setup. 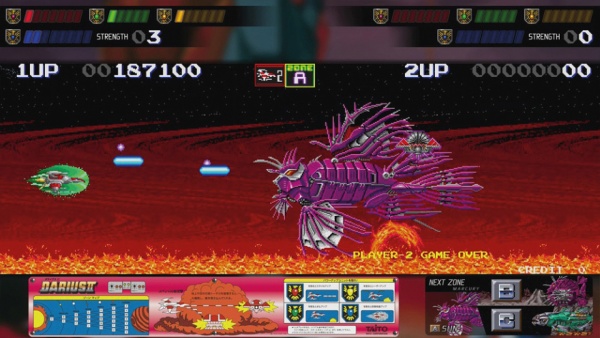 Each game has its own look and feels, with the earliest game feeling more like a Dark Souls of the side-scrolling shoot’em ups. Whereas the later games felt more relaxed and lent towards action and fast pacing. They’re all solid games and I’d admire the small changes made in each title and seeing the developers trying new things with each installment.

What makes Darius a little more interesting are certain enemy types and bosses, many of whom are based on aquatic creatures. This may not seem like much, but at the time and even now, many of these bosses were pretty neat and different from the competition. I love other games like Contra, but you could clearly see where they “borrowed” elements from popular movies to create their bosses, like having giant Terminators being the standout. Darius at least took a different approach and had a pretty interesting field for their influence.

Some of the designs are pretty creepy or look almost Love-Crafting, but many sea creatures, especially those closer towards the seabed do look alien and just otherworldly.

Darius also implements a pretty compelling path system throughout the campaign. You’ll start in Zone A and at the end of this Zone, you can move onto one of two possible Zones. This structure continues and results in a total of 26 stages to complete and there are even multiple endings. For a series born in the mid/late 80’s, this was hugely dynamic and impressive.

While it was a sure way to get more money at the arcades, it also showed the developers were happy to make each game an epic event, providing true value for money in some respects. This helped for replay value and seeing each environment lovingly crafted really does show the creators, artists and programmers originally behind Darrius, did care.

There’s plenty of action, plenty of bosses and a huge campaign to play, what’s not to love?

What’s not to love? 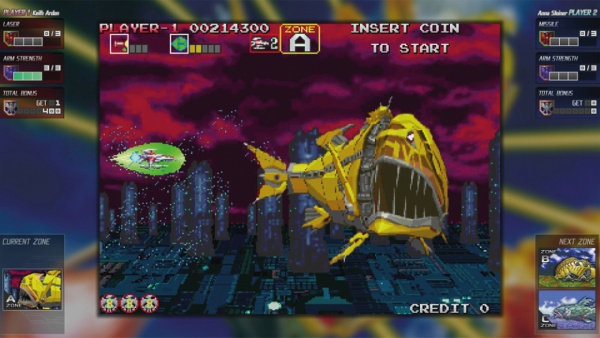 So the first Darius game is a massive pain at times as it’s very fickle with lives and doesn’t offer a chance to retry after taking a hit. You die and have to start over. Thankfully there is a save system and it’s fairly easy to use mid-game. But I don’t understand why there are no lives in this game?

Well, actually it was designed for an arcade so that’s why. But even so, it’s extremely cheap!

The later games at least give you a few lives and attempts if you are hit at any stage. Just be warned that these are very good games, they’re also very hard, even the later games. However, there is a training mode as well for all games, so this can be helpful for those new to the series or to the genre.

The only other problems I have are the price and the lack of extra content. Now I know everyone dislikes Konami, but in their collection releases, they at least had extras, showing how their games were made and some interesting pieces of gaming history. Darius doesn’t sadly and it’s a shame as I would love to know more about the design of the campaign and monsters. Plus the asking price for release is pretty dang high! You would either have to be a massive fan of the series or love these types of retro games to shell out £30/$40. For.

The Darius Arcade Collection is a lot of fun, a wonderful blast from the past that’s solid, dynamic and shines about many in the genre. But the asking price, some cheap difficulty spikes, and lack of extras don’t make it absolutely appealing. It’s worth getting, but maybe when the price goes down a little.

A PS4 review copy of Darius Cozmic Arcade: Console was provided by the publisher for the purpose of this review