So back in 2008 a little indie game came onto the scene and developed a cult following in the process. After 12 years that game is back with a shiny lick of paint and a few tweaks to make it ready for current-gen tech. Edna and Harvey is a bittersweet tale that revolves around murder, mystery, mental health and talking rabbits. Is it worth the purchase? Find out.

Edna and Harvey follow in the same footsteps as games such as Broken Sword and Escape from Monkey Island. Indeed for gameplay but also sharing similar story beats and structure. You start off not knowing anything at all about Edna, a young woman who’s trapped in an asylum and her talking rabbit Harvey. They’re trapped in a room with no memory on how they got there, why they’re there or even who’s imprisoned them. 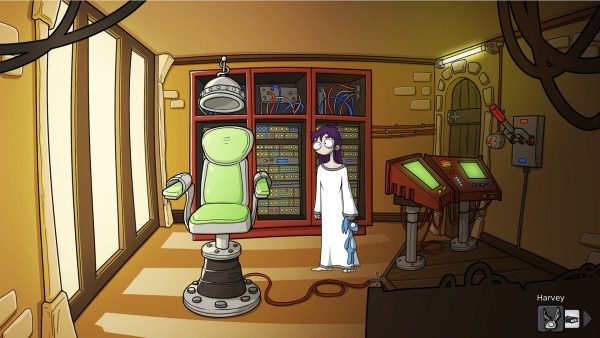 As you slowly explore the environment before you, Edna will learn some dark secrets about her family and about those who’ve imprisoned her. It’s a tale involving a thrilling escape and finding out the truth behind the madness. Along the way, you’ll meet some colorful characters, all playing vital roles but harboring their own mental anguishes.

Edna and Harvey do a very good job of building up the suspense and mystery, with a cast of likable characters. Edna and Harvey are very witty, funny, and overall a very likable pair. They don’t have a great dynamic such as the odd couple angle, but they have a good relationship and do care for one another as close friends should in a difficult situation. They have good banter with a couple of pretty funny lines here and there. I did especially like the Meta moments where Edna could speak with random objects and some of them would talk back to her and say hi.

Most of the supporting cast is fine, if not a little one-note, but manage to service the story just fine. The mystery itself will keep anyone engaged and enough of the truth is revealed at a good pace to ensure you’re always on the edge of the loop until the end. I won’t spoil anything but the ending came as a nice surprise. 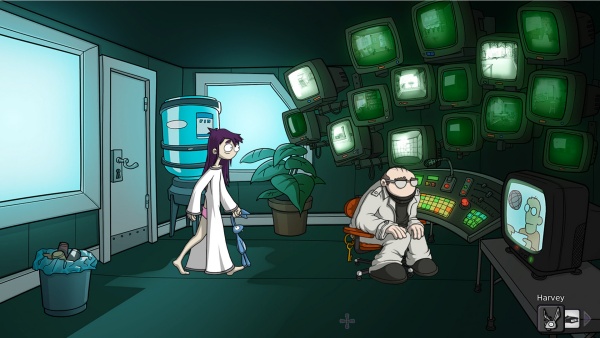 Edna and Harvey again takes influence from games such as Broken Sword and other classic point and click adventures. Players will find themselves in a location where you are presented with a problem, normally a locked door or someone being in the way of your goal. You’ll then have to explore the environment, discover clues, speak to people and find/combine key items in order to discover a resolution.

Solving one problem will lead you into another area, but then you’ll be hit with another, more complex problem to solve. It’s really like solving a multi-layer puzzle and finding key items or solving smaller puzzles is part of the process. For someone who played games like this at such as young age, I was able to grasp the mechanics and understand the processes needed. But I would say that in terms of mechanics, Edna and Harvey is very simple, yet engaging and shouldn’t be too much for a newcomer to the series. Everything is laid out clearly from the points in the level you can engage with and the inventory is easy to manage.

Above all and thankfully the developer has not implemented too many puzzles with “Moon Logic” in my honest opinion. Moon Logic is a term infamous for point and click games where a puzzle requires the most convoluted and long-winded process to finish. Broken Sword had a few of these and there were very annoying i.e the goat puzzle (Google it, it’s very infamous and even die-hard Broken Sword fans like me, hate it). So most puzzles can be figured out without too much trouble, so long as you’re willing to put in some time to observe your surroundings and investigate.

This does lead me to my only real problem with Edna and Harvey is the number of items you can interact with. There are multiple areas with dozens of items you can either “Use”, “Take”, “Speak with” and more. It can be absolutely exhausting when you interact with every single item in a room and 99% of them are useful. I think the first area sums this up very well. 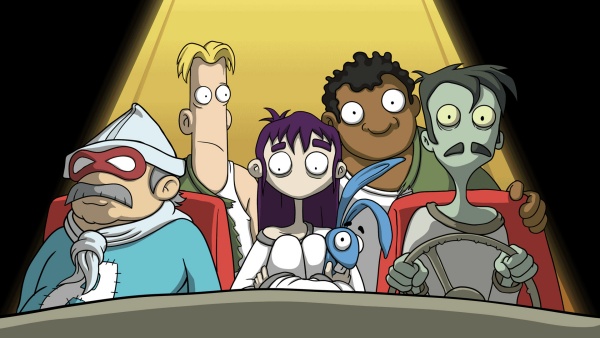 The first area basically sees the player having to escape from the cell Edna is held. In the cell, are padded walls of course and the player can interact with near enough every single pad in the room. All but one pad serves a purpose and this type of layout for a problem repeats itself multiple times. By the time I reached the 5th room filled with dozens of items, I did lose a bit of my sanity. While games like Broken Sword would have multiple items in each environment, they were much less than this and all the items had some purpose. It was more about finding a combination of items and using them in a unique way.

Edna and Harvey just feel as though it’s prolonging the run time but having you waste time interacting with items that serve no purpose what so ever. There are some moments which lead to a laugh, ones involving writing out stuff with condiments and meeting a grouchy fellow in a waste paper bin. But most items just don’t offer much substance, whether to serve a gameplay or story purpose. They’re just there.

While the game does look really nice, I did also find some of the animations to be lacking. There were a few instances when character animations looked very odd, as though a few frames were missing from them. It just made certain scenes fill jarred and broken and overall, it was a shame as the visual presentation is pretty nice. It’s a massive step up compared to the original game and looks overall. Plus it would’ve been nice to have some extras showing us the process from making the anniversary edition from the original base game. 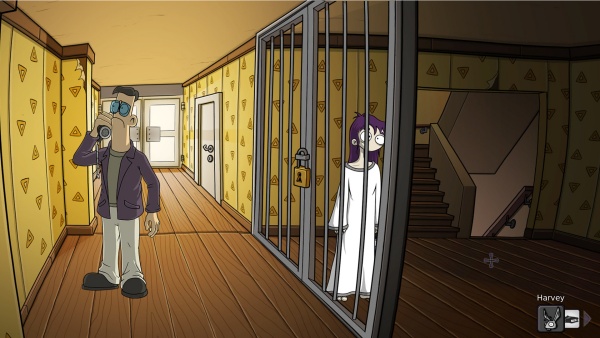 Enda and Harvey is a blast from the past and I mean that in both a positive and negative way. It has that vibe of indie development from the 2000s which made us inspiring game designers feel we could do the same. It’s hard to describe unless you were, like me, involved in the 6th generation of gaming where Flash creatives ruled the roost in the 00’s indie gaming scene. It’s visually very nice to look at and has a pretty good story that’s funny and a little tragic, but overall written out quite well. But like many games from that era, even heavyweights like Gears of War, there are some things which have not aged well.

The overabundance of interactive items is blood boiling levels of tedious and just serves to prolong the journey for no good reason. I appreciate that the developer did a good job at avoiding moon logic for the most part and incorporated some neat methods on obtaining certain items through flashbacks. But having multiple areas with dozens of interactive items, 95% of them useless, just feels unfocused. I still would say to check this out, but it’s for a certain type of gamer. One like me who misses their youth and grew up in the dawn of indie gaming. While not on the same level as Braid, I’d still say it’s admirable and worth remembering.

++ Nice visuals and good story
+ Good character development, dialogue and a sense of mystery
+ Solid point and click gameplay for the most part
- Some very tedious guessing work and too many items that serve no purpose
- Some odd animation glitches and lack of bonus content

A PS4 review copy of Edna & Harvey: The Breakout - Anniversary Edition was provided by the publisher for the purpose of this review.