So I had a friend many years ago who had a terrible fear of sharks. His greatest fear would be eaten by not one, but two sharks! Yeah, sharks are pretty scary of course with things like Jaws cementing the unnerving notion that big fishes can kill and eat you. However sharks have become a bit of a joke in recent years with the awful sequels to Jaws, the likes of other terrible films about sharks such as Ghost Shark, Mega Shark, Shark Attack and the upcoming Big Shark from The Room’s Tommy Wiseau.

So Sharks have a weird rap of being scary, yet also being a laughing stock at the same time! But they’re popular none the less in pop culture.

Now in terms of gaming, Sharks don’t have much of a rep at all! I mean the idea of being a maneating beast in the ocean sounds like a great concept for the game but it hasn’t been successfully done. Well, how about a Shark inspired RPG that feels like an underwater version of GTA in some strange way? 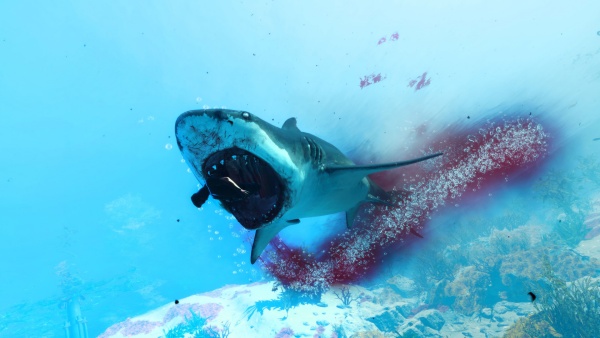 Maneater is a satirical look at the fascination with Sharks in pop culture and just how low humanity can get with things such as the environment and thrashy TV. As the trailer explains, the ratio for shark to human deaths is incredible and you have more chance of being struck by lightning than being eaten by a shark. But that doesn’t stop people just killing off left, right and center. While this game isn’t pro shark, it is Pro Ocean and why we shouldn’t f**k around with it.

Maneater showcases people looking to wipe sharks off the face of the planet, in a bid to gain fame and respect through a tacky TV show. Or simply to gain a nice fortune by selling their soul to mega-corporations looking to develop beach resorts at the cost of the ocean.

In terms of a plot, you play as a newborn shark that starts life quite literally being torn out of the womb. The hunter who brings you into this world through brute force is known as Scaley Peter, an infamous TV personality that thrives on killing sharks for not only financial gain, but also due to a personal hatred.

So making a narrow escape after your gruesome birth, you start your journey revenge. Along the way you’ll grow, learn and adapt as you become the ultimate hunter. You do this by exploring the surrounding regions which have been tampered with by human beings, eating smaller prey, taking on bigger foes both in water and even out of it and killing a line-up of infamous shark hunters.
It’s a sort of warped Moby dick tale, with a reversal twist where the animal is getting the revenge on the humans.

Now for a game about a maneating shark looking for revenge kind of brought memories of the ludicrous Jaws 4: The Revenge. But thankfully the writers behind Maneater have put enough depth into the main human characters to give them traits you can understand and empathize with. Scaley Pete, while a scum bag in some regards is someone who has a heart in the grand scheme of things. The story does have a satirical edge that will make you laugh and weep at how uncanny it is to the current world we live in. With elements such as foolish TV personalities who poison our screens for their 15 minutes of fame and the general observation that human beings are pretty douchey.

I do think in terms of a story about an animal wanting revenge is pretty engaging and really did leave me thinking about how it would end. The world-building is great with a unique setting and each region being very distinctive in scale and tone. There’s a surprising amount of lore, a line-up of sea creatures to feed on and fight while the human characters all have striking personalities.

Plus you have Chris Parnell (Jerry from Rick and Morty) offering a light-hearted and at times cynical commentary which acts as the overseer to the shark. Which is good as the shark doesn’t speak. But it does get electric teeth, bone fins and above all just looks really cool. I respect the shark a great deal and the story. 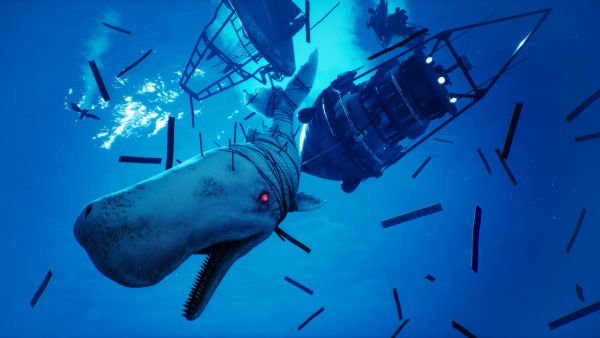 Gameplay – Under the sea!

Now when I first heard about this game I saw a number of comparisons and existing games/genres being thrown in with the word shark. Such as GTA with sharks and Shark RPG! And yes it has elements of those things all in one neat package, but has a decent amount of substance than these mere comparisons.

This is an open world where you can explore the various environments from swamps, manmade lakes filled with toxic waste, beautiful beaches turned into resorts, and other natural habitats which have been altered and corrupted. Swimming as a shark is a great experience and the developers/animators have done an amazing job at animating every sea creature in the game. I have experience in the game industry and have done some animation work and I can tell you, animating creatures such as fish is not easy.

But swimming is a joyous experience, almost as good as say a game which incorporates flying (like Anthem … well the flying was good and nothing else). Exploring the vast waters before you is an immense experience and level of collectibles and hidden rewards is very captivating. While this is absolutely arcade-like in many respects, with floating collectibles, discoverable landmarks such as statues made from plastic pollution (I did chuckle and cry at these moments because, you know, we’re destroying the oceans) and chests filled not with booty, but minerals sharks can consume! Nice!

It’s such a weird, but beautifully designed and engaging world, which has a great sense of scale, variety and plenty of stuff to do in it. Exploration is the main highlight for Maneater and simply swimming, obtaining these hidden rewards and just discovering new places is a pure treat. 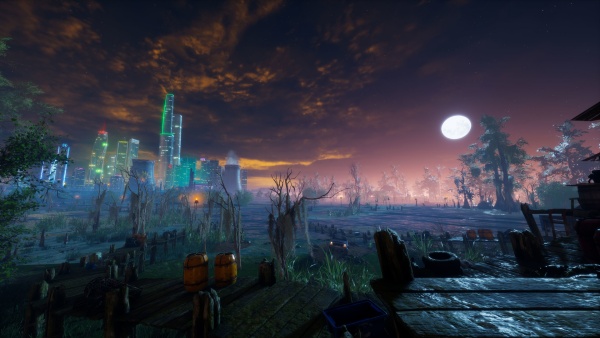 Now we come to the meat of the game, the maneating stuff. Yes after playing this I was now terrified that sharks could jump out of the water and eat people in the comfort of their homes. Yep, there’s some weird and scary stuff here. I never thought land sharks could be a thing.

As a shark, you can eat fish, other sharks and of course humans. You consume as a means to obtain minerals and in return, you use these minerals to level up. The bigger you become, the more areas you can explore, obtain abilities that allow you hunt more efficiently and of course, take on those big, bad shark hunters.

Combat is very simple, as you can really only bite and tail flip enemies. But you do obtain new perks and abilities which keeps the combat from being totally tedious. Things such as bone teeth which deal more damage, electric fins causing potential stun attacks to enemies and important organs that increase health and perception. These add more layers of defense and attack points to your shark and overall look very cool. It is a shame however there aren’t more maneuvers or tactics to implement during encounters. As mentioned it really is about flipping your tail, biting, and the odd instance you jump out of the water to grab someone.

It might’ve been more interesting to have a stealth system of sorts or be able to catch and throwback explosives, just to break up some of the more, long-winded and tedious encounters.

I only bring this up because the main bulk of personal progression (obtaining perks and upgrades for your shark) relies on taking out infamous shark hunters. Due to this, you simply eat humans and raise the threat level enough to call out the basic hunters. Kill enough of these basic hunters and outcomes one of the legendary shark killer for you to take out. Take them out and gain a new ability. It’s a solid and rewarding system that has a great risk/reward mentality. 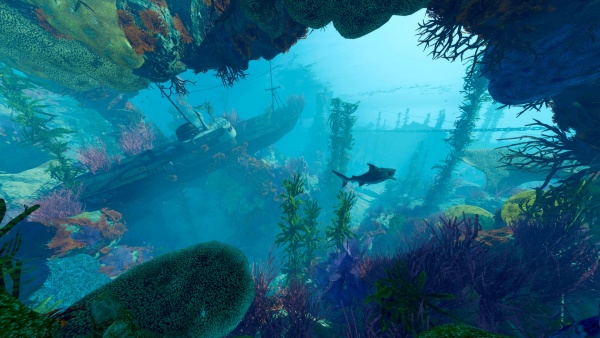 But there were some issues mainly with the pacing in the late game. Halfway through the list the process of killing enough basic hunters to draw the legendary one takes an age. By the time I was trying to draw out the fifth big bad hunter on my list, it took 10 – 15 solid minutes of biting, tail flipping and jumping to do so. It would’ve been much smoother if completing tasks around the map also raised your threat level and could potentially draw out said, legendary hunters.

There are plenty of objectives on the map and these offer smaller rewards or add some context to the story/world-building. Plus there are the Apex creatures that do also reward your gear for your shark! But If you’re looking to get all the serious stuff, you need to do the repetitive task of killing dozens and dozens of basic hunters in order to bring out the big guns. By the last shark hunter, it felt like an age I was killing hunters and with only a bite and tail flip attack, it did become a chore.

Although I will say that jumping out of the water, grabbing hunters and destroying boats was satisfying enough but not for a continuous 10 or 15 minutes. It is true you can break up the encounter into smaller chunks, but to obtain the better gear as quickly as possible, it’s worth just getting it over and done with. I just wish some more methods of engagement with enemies were included. It doesn’t help as well that attacking enemies in shallow waters can lead to frantic camera movements, which prove to be a little disorientating.

Okay so I’m not bashing the combat but I am saying it could’ve been expanded upon or at least have another trick or two to perform. It’s solid combat, easy to learn and when it works, it’s a lot of fun! I do love how you can customize your shark with visually pleasing and very useful perks/add sons and the boss battles with the Apex creatures are a lot of fu too.

Also exploring, evolving, and swimming is just so awesome that it really does ease some of the more noticeable problems.

Maneater is simply the best shark game on the market but it’s also an incredible testament to the developers. I never thought I could have so much fun with a shark focused RPG, but I did. After spending nearly 20 hours on this, I simply love it. It’s sense of exploration is highly rewarding, swimming never felt so much fun, the story is really engaging and funny and while combat could have more depth, it was brutal, bloody and still very fun when the intensity rose up.

I have gotten bored of games like Assassin’s Creed and GTA and even other recent RPGs have not gaged much interested for long. But Maneater, is something incredible. It’s just a refreshing entry to the genre that’s surely destined to be a cult classic. I only wish more developers would take a bite and do something new in the genre.

++ Exploration and world building are amazing
+ Great animations, swimming is immense and is visually pleasing
+ Great story with Chris Parnell doing a good job at narrating
+ Great sense of progression and customisation
- Combat is fun but a little tedious at times