Saint’s Row is an interesting beast, one that started with a very humble, grounded beginning and has become an absolute, crazy monster fuelled parody of not only itself but other games in the genre. Saints Row realized that it won’t be able to beat GTA at its impressive immersion and storytelling, but it could outdo it on gameplay and fun! With the first game being this ground, quite a dramatic tale of gang warfare, then the sequel pushing its silliness up a little (featuring Gary Busey, need I say more) then coming to what is considered the best of the series, Saints Row: The 3rd. Where it’s original reveal trailer was a guy being kicked in the groin.
That should clarify what type of game you’re in for.

This remaster comes nearly 9 years after the release of the original game and hosts an immense list of visual improvements. Plus, it hosts all that sweet, extra content into one big and satisfying package (see, this game is making my puns rude now!). 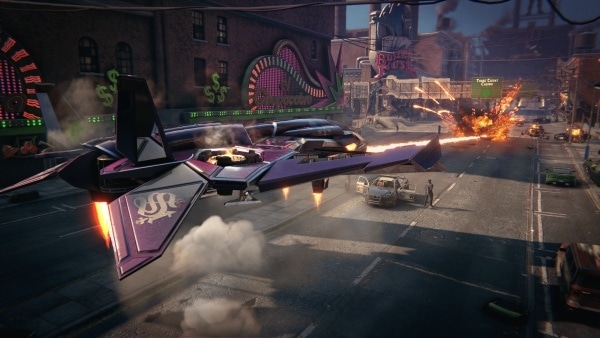 Saint Row: The 3rd isn’t winning any awards in terms of story. It continues from where we last saw the Saints, having established a global empire that has made them into successful entrepreneurs. This means they can do pretty much what they want, when they want and be considered royalty while openly committing crimes. That is till one day when a new organization known as the “Syndicate” (I know, not original but they do make fun of this fact) moves into the city of Still Water in an attempt to take over the Saint’s global empire. Meaning the Saint’s do all the hard work for less of that sweet, sweet money!

As you imagine, you and the Saint’s aren’t too happy about that. The tension is only heightened when a beloved homie is killed off, thus triggering an all-out war between two powerful criminal empires. So it’s back to building up the empire again, taking on the Syndicate, and getting your street cred back.

Now the best way to approach Saints Row: The 3rd is simply to dive in and not ask any questions. Pretty much what you have to do when watching a film about time travel. Don’t think about it and just enjoy the ride. Because there are so many plot holes and questions that mount up and, thinking about them might just break your brain. The story is completely backseat to the gameplay and overall is very low end. Even giving you typical starting missions such as “pimp your car”, do some low-level activities, and build your cred, and so on. The stuff which got old and GTA moved away from by the 4th main entry. Missions which fitted the first Saints Row but here, seems weirdly out of place. As you have an empire, why don’t you start off with something more interesting?

Thankfully these low-level missions do pass by quickly and there are some epic set pieces in the first few hours of the story. Throughout the campaign, it’s a joyous and insane adventure, filled with plenty of action, charming characters and a huge amount of self-awareness that does wash away any ill or clichéd writing. 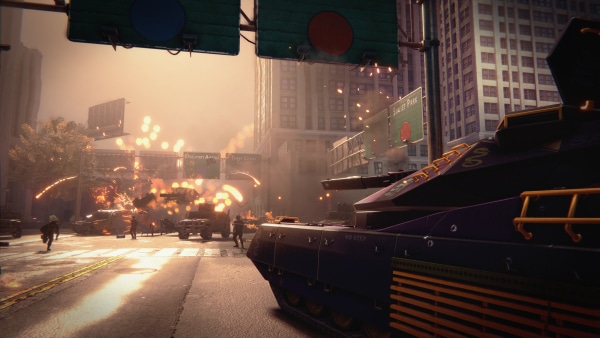 So like pretty much any GTA clone, you can expect driving, shooting, notoriety, breaking the law, pimping up your ride, and much more. Now I will admit, saying Saints Row is a GTA clone is a little harsh. While both games do share the same type of foundation, where players can explore a large open world that so happens to be a city filled with crime and opportunity for mayhem. Saints Row pushes the envelope for the more surreal and ludicrous moments that make it a ton of fun! But it’s also very simplified in many other ways which do let it down somewhat.

So as you expect, you can drive around in a nice variety of vehicles, even those which are completely out of this world! Steal said vehicles, have massive shootouts with a number of dangerous rival gangs, purchase a number of businesses across the city to gain an hourly income and of course, create your very own character that may or may not have gigantic FF boobs!

Yeah, I appreciate Saints Row allowing players to just go nuts when making their own characters and the amount of customisable content is ridiculous. Even more so that all the extra content is unlocked right off the bat! So you can dress up as a knock-off Storm Trooper, or wear something that resembles an 80’s arthouse movie, biker, samurai, ninja or even just go completely nude!

The driving is a lot of fun and the immense amount of means to traverse the world keeps things fresh and enjoyable, unlike the more grounded GTA 5. You can drive, fly, vehicle surf (which I forgot you could do!) or just take a nice jog throughout the city. Aside from driving, there will be plenty of shooting as well. The line-up of foes doesn’t spark much imagination but the weapons on offer do. You have your standard pistols, SMGs, and rifles, but also the more explosive kinds of firepower such as Predator drones, old-timey shotguns and anti-tank weapons that make a big ba-da-boom! 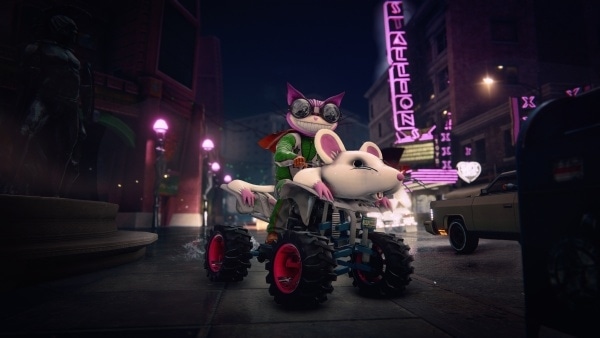 There’s also plenty to do, such as finding collectible items (such as collectible sex dolls – unused I hope!), taking out rival gangs and their operations, and buying a wonderful arrangement of local businesses such as strip clubs, crack houses and sex dens… nice! But if you’re in the mood to earn some extra cash and street cred, you can partake in a number of awesome (and not so awesome) activities such as Trailblazing (you’re driving while on fire), Tank Mayhem (yeah it involves a tank), Genki-Bowl (basically a murder, death kill inspired gameshow with plenty of feline imagery) and much more.

Saints Row: The 3rd is a ton of fun and it will keep you invested throughout a 20 hours gaming experience. I do wish some more depth was added to the world, such as more interesting dynamics when purchasing businesses. Such as improving those businesses to earn more money would be great, even to explore them and see what’s happening (like GTA does in some cases). Or maybe include saying romance options in the game! I know, it sounds stupid and this is not Mass Effect or any other RPG. But I would love to get a chance to have my character get down and dirty with anyone they wanted and you could really have had fun with the idea. Like, do a dating version of Genki-Bowl that has murder and mayhem and some action at the end!

But these very small, shortcomings don’t ruin the game at all the immense amount of content is insanely good. From extra missions where you can star in a sci-fi action movie, to hunting down a clone that resembles a fallen homie, all make for some great adventures outside the campaign.

What is annoying beyond belief are the difficulty spikes and the super aggressive AI! Early game, it’s best not to go too crazy and cause trouble as you’ll receive ultimate beat downs. The level of reaction from enemies can be super immense and what did piss me off (remembering how it was back in 2012) is the super-accurate enemy AI and the poor friendly AI. I mean, helicopters can move as fast as a speeding car and hold a pinpoint accurate shoot for like 2 – 3 minutes.

Plus, some missions have the worse checkpoints and longest mission lengths known to gaming. There are a handful of missions which could be shorter and have an extra checkpoint here and there.

But as mentioned previously, Saints Row: The 3rd is still immensely enjoyable none the less.

How does it look? 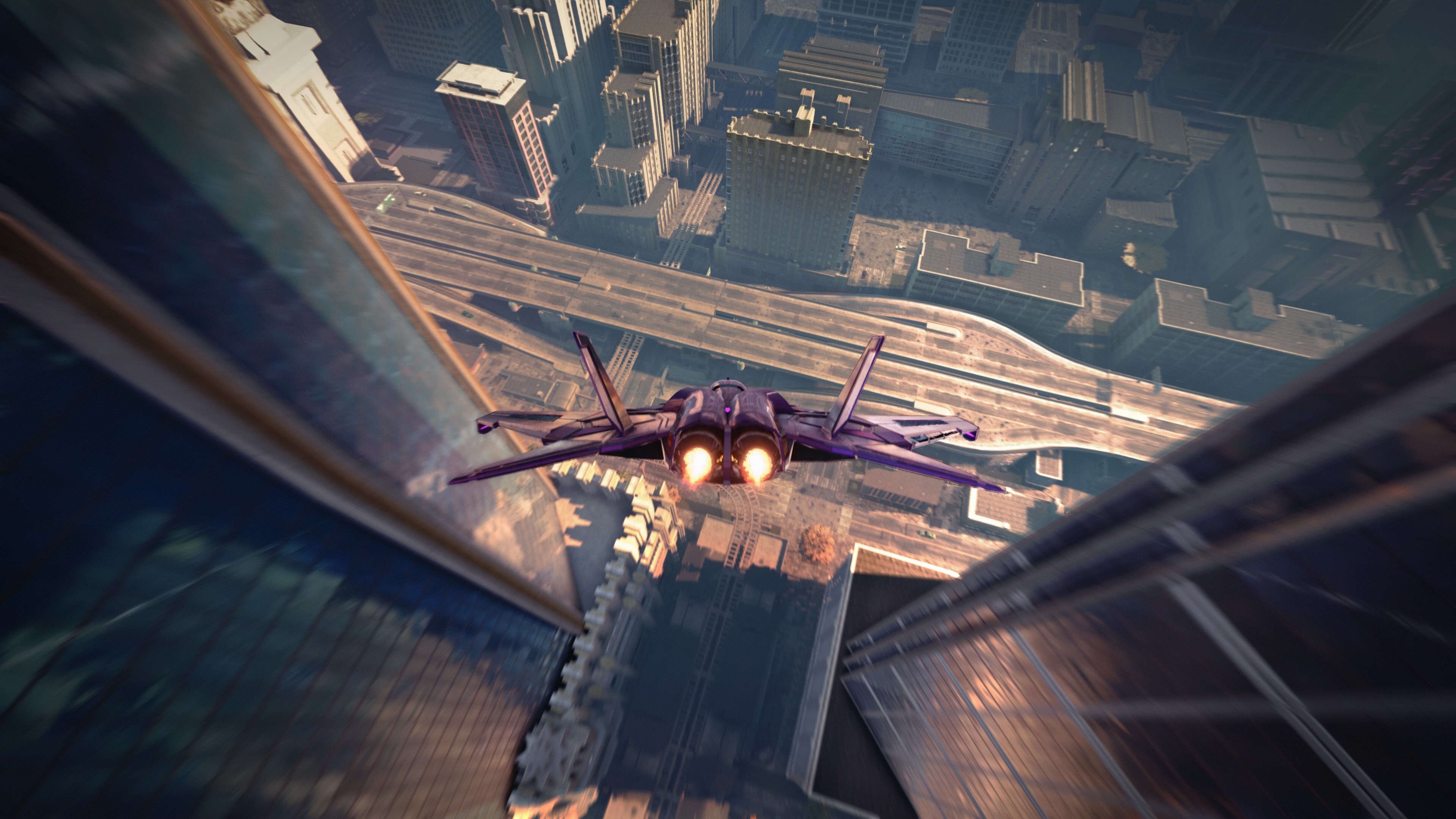 So, Saint’s Row: The 3rd has been given a few touch-ups and a shiny coat of paint for this current gen of consoles. Overall it looks pretty nice, with improved rendering (Antialiasing), enhanced volumetric effects, enhanced Depth of Field, environment reflections, improved VFX and higher resolution textures to name a few.

The game does look great, feeling much more alive and organic, thanks to some impressive lighting tricks and previously mentioned enhanced reflections. There were some small graphical glitches, where my character's lips were colourless until the texture loaded, some super shiny surfaces which kind of reminded me of the Gold Source port of Half-Life and at times, the super nice sunset bathed environments can at times be way too bright! I remember driving and the light covered the entire screen, to the point I could barely see where I was driving.

++ Massively entertaining and engaging
+ Unapologetic and rude (and I love it!)
+ Tons and tons of content!
+ Nice visual improvements for the most part
-- Super aggressive AI
- Could have had more depth in certain gameplay mechanics
- Some aspects of the remastered visuals are overkill

A review copy of Saints Row: The Third Remastered was provided by the publisher for the purpose of this review.