Who loves the 80s!? Who loves 80’s action movies!? That’s right everyone does! Back then, you had your heroes, guns and plenty of action to filled 90 minutes of pure mayhem. Escape from New York, Tango and Cash, Big Trouble in Little China (yeah I’m a Kurt Russel fan) and many others dominated the world and we love them for the impact they had. But now it’s all kind dull, with superheroes filling up most of the roster and they’re fine, but they’re not special like Die Hard, Aliens or Robo Cop. But now a talented team of developers have decided to bring us likely gamers an immense and over the top package of 80’s action!

Can this 32 bit inspired side scroller pay homage to the greatest era of action films? Let’s find out! 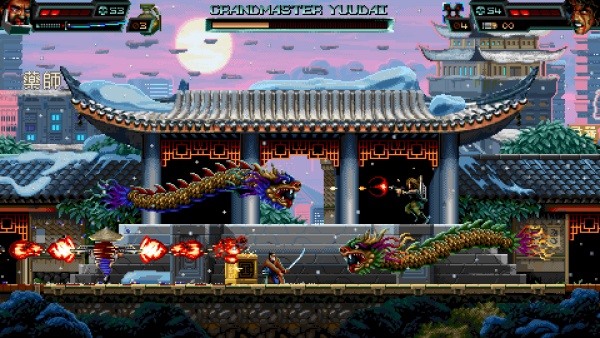 Huntdown is a classic tale of just how bleak the future will be. But not just any future …. This is an 80’s cyberpunk dystopian future (oh sweet Jesus!). Basically everything has gone to ruin, with war, poverty and bad haircuts bringing human kind to near extinction. But a large, super friendly and non-evil corporation comes along to give people hope, so long as they work and serve under them. Yet there are those who just can’t shake off the need to be bad!

So, we have numerous gangs, made up of people wearing gear the represents anything pro-wrestling, bondage and Mad Max related. These gangs have caused enough trouble and it’s time to take them out, in a series of epic showdowns. Here comes in the Hunters, three super cool, super badass and super 80’s heroes determined to bring these guys in dead or …. Well dead.

So yeah, that’s pretty much it. You play good guys, who kind of act like bad guys to take out bad guys who looks really silly and would put the Warriors to shame in dress sense. It’s not a complex or endearing story granted, but there’s plenty of character and charm to it. Players can take the role of any of the three hunters who include Anna Conda, a woman with an eyepatch and nerves of steel, John Sawyer the metal-jawed cyborg who takes no crap from anyone and then there’s Mow Man (my personal favourite)who’s a pleasant speaking skull-faced robot killing machine. 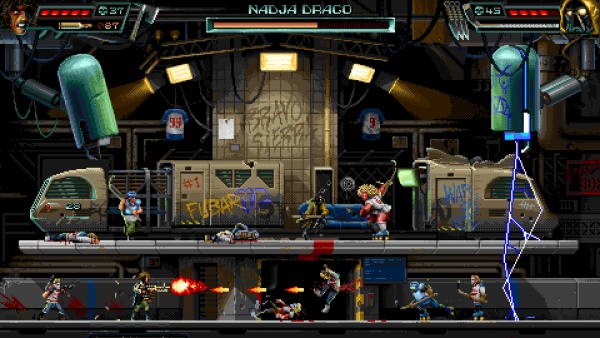 The hunters are all very likable, the setting while having been seen before is expanded upon in many ways and the antagonists are all really fun to fight against. It’s a perfect 80’s love letter in terms of style, presentation and tone. The setting, characters and general aesthetics are beautifully created to conjure up the best of the 80’s action scene.

Visually speaking this a really great looking game! I know we have dozens and dozens of pixel art, 16 bit homages nowadays but this does have that unique edge over many others. It’s in line with other games such as Bro Force, The Butcher and Not a Hero where the art style matches the tone and in some respects the theme.

Not to mention the level of detail and animation that goes into the backgrounds/foregrounds, character designs and cut scenes is very impressive with such a small team behind it. 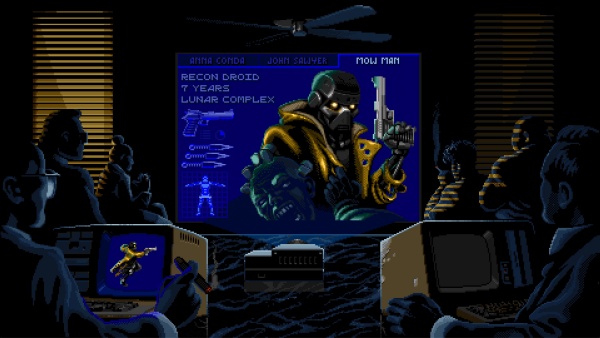 As expected from a side scrolling shooter, you’ll be moving from the right side of the screen to the left and maybe back to the right, depending on the level’s layout. You shoot, jump, kill bad guys and collect hidden rewards throughout the level.

You’ll be armed with a variety of different weapons depending on who you choose out of the three hunters, but also gain access to low level firearms and eventually power weapons to take on the harsher foes. This is a pretty straight forward shooter, with plenty of explosions, encounters and the odd set piece here and there, plus a boss battle at the end of each stage. The sense of challenge never felt unbalanced even when things do certainly heat up. There are noticeable difficulty spikes and these can be very annoying if you’re playing by your lonesome. But thankfully the pain is eased considering the generous checkpoints scattered in each level. 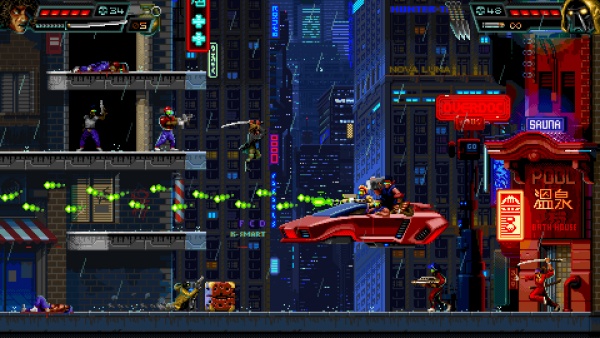 While it doesn’t do much to expand upon some solid, but very familiar gameplay mechanics, what we get it very entertaining. It has the action, intense gun fights, engaging boss battles and the flare to keep your attention and awe. There are small touches which do make this a little more special than other throw away shooters, with cool environmental story-telling elements, a cover system which can be a live saver and a pretty enticing scoring system that make me go back a few times, repeat a few levels and become the best hunter I could be.

My only real gripes were the annoying difficulty spikes and lack of any mechanics or progression systems that allow you to improve your hunter and obtain power weapons or new abilities. A game like Not a Hero rewarded players with new characters when they achieve enough points across a number of levels, thus adding a layer to the reward scheme or actually implementing a reward scheme.

Huntdown is a fun, energetic, and beautiful looking shooter than 80’s babies and anyone who loves anything 80’s will surely enjoy. This is quite frankly, the best mash-up of the 80’s greatest films such as Escape from New York, The Terminator, Robocop, Running Man and Blade Runner. It’s so unforgivingly shameless in saying “Yep, we love the 80’s action scene!” and I respect that.

More so, I freaking admire these developers for creating the best 80’s inspired action game to date. Bravo!

An Xbox One review copy was provided by the publisher for the purpose of this review.