Now it’s been 25 years since the last installment of the greatest side-scrolling brawler series ever made, Streets of Rage. Its true gamers and fans were divided on Streets of Rage 3 and many felt it lacking, compared to the brilliant two games before it. Regardless, Streets of Rage is a legendary series that many, like myself, have loved but since it’s heyday but over the last two and a half decades, we’ve had to settle for ports onto modern consoles and the memories that will never die. Thankfully, 2020 marks the return of this great series, and Streets of Rage 4 is finally here.

Does it live up to expectations? Is this sequel worth the 25-year wait? Let’s find out. 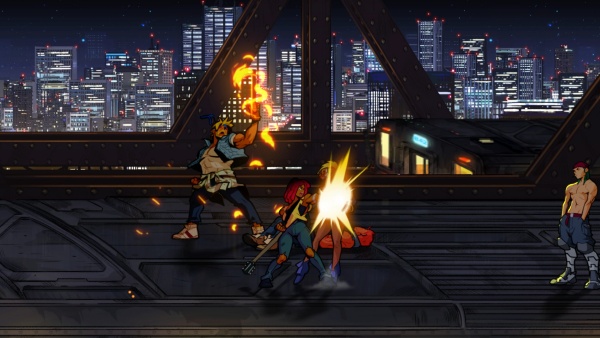 So the story is not going to win any awards but it’s not trying to do so. It’s just aiming to continue a classic series with beats of the original games which are simple yet easy to follow and engage with. Basically it’s good guys vs bad guys and maybe a small twist here and there for good measure.

The plot for Streets of Rage 4 is set ten years after the events of the last game. The city of Wood Oak has finally found peace with the demise of the criminal mastermind Mr. X. However it seems like the apples don’t fall far from the tree as his children, simply known as the Y Twins have plans for world dominance. It all, of course, starts in the infamous city Oak Wood but the aging heroes Axel, Blaze and Adam who defended the city before (and the world really) make a comeback. They are thankfully not alone as a few new up and rising fighters join the team in a bid to defeat the evil Y Twins.

The gang will traverse a number of locations through the city in their journey to stopping the new, criminal syndicate and its troubled duo leadership. Anyone who’s played a Streets of Rage game before will see familiar locations, such as the downtown streets, harbors, secret islands, and of course the classic elevator stage. But there are some new, vibrant environments such as Chinatown and the local Police Precinct. For a game that didn’t need much of a story, the writers have managed to string together a series of locations with a decent narrative thread.

While the plot is something special and rather simple, it’s still very entertaining. I would’ve loved to see more development to the characters, understanding who they are and maybe learn a bit more about them as people. As it stands, it’s just good guys and bad guys in the simplest fashion. But I loved seeing the world of Oak Wood city in greater detail, with more locations, lore and above all, more life. 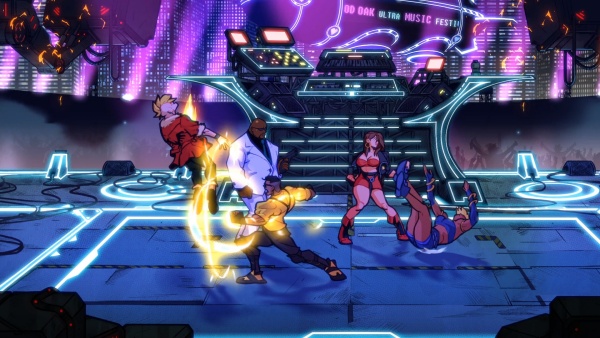 I will say that Streets of Rage 4 is simply beautiful in terms of presentation, no question about it. Everything from the art style to the animation is flawlessly executed and looks amazing in action. Characters, environments and cut scenes all look slick and cool.

I found myself thinking about how well the artists have recreated the tone and feel of the original games yet went above and beyond to improve it drastically. Everything is super colorful while being extremely atmospheric, enemy designs while for the most part look too familiar with the old games, do look great and the attention to detail and smoothness of the animation makes it all feel like a super, high budget, hand-drawn animated film.

Every environment looked great with some outstanding exceptions such as China Town, which brimmed with life, color and atmosphere. Basically this level displayed the master skill that went into making this game.

Performance-wise, everything ran great with no frame rate drops, crashes or strange glitches appearing during my dozen or so hours with the game.

My only issue really was with the music. Now the music for the original games was iconic with the boss theme in Streets of Rage 2 is one of the most recognizable pieces of music ever in gaming! The music for Streets of Rage 4 is fine but just leaves no impact what so ever. The boss themes aren’t highly engaging, adding little to the fight’s tone and feel while many of the level’s own themes just drain out and you’ll be forgiven if you forget what it sounded like. Put simply, if you get a Streets of Rage fan, play any song from any of the original games, they’ll tell you which level it came from. Here, they’re fairly generic (nice, but rather undistinctive) and just don’t leave much of an impression. 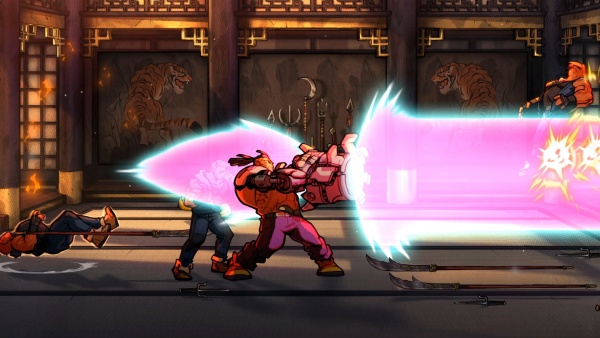 Streets of Rage 4 is an intense, slick, and brutal fighter that keeps things simple yet has plenty of action and great pacing to keep things interesting. Players will choose from a selection of characters, including Blaze, Axel, and Adam, and take on the mean streets, harbors, and secret islands of Streets of Rage 4. Each character does feel slightly different from one another, in terms of speed and the weight behind their attacks. With Axel and Blaze feeling like the standard, very average fighters and the newbies actually managing to top them with a slicker set of attacks and moves. Cherry is much leaner on her feet while Floyd is a beast who feels a little overpowered, but massively enjoyable to play as.

For diehard fans of the original, just to say that the new kids on the streets might have the upper hand.
Level layouts are of course very linear with no branching paths or multiple choices as such to make. A shame as it could’ve been introduced and executed well with the right creative flare. But again, the team has kept this sequel very simple, with a linear path throughout most of the campaign levels. This could be due to appease old fans and not stray too far away from the winning formula that made the first two games classics. I do admire how well the team could replicate a retro classic in this day and age, but I wish more risks were taken to flesh out the already great formula to make it possible even greater.

However, the paths you take are not quiet and hosts waves of gripping fights and encounters. Plus there are a few secrets to find, namely callbacks to the old games themselves and enough in regard to combat depth to make each fight interesting without feeling repetitive. As the fights stack up, new enemies are introduced, small set pieces spring up to knock you off your socks, bigger, more dynamic levels are pulled into the campaign with said classic “elevator” and “train levels” that made Streets of Rage superior to the likes of Double Dragon. 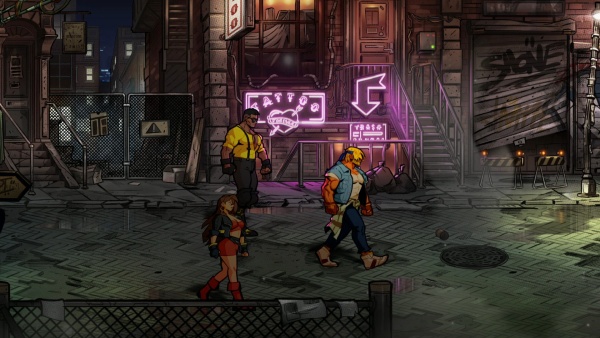 Streets of Rage 4 does introduce some neat mechanics such as throwing weapons and catching them again in the same action if you have quick reflexes. Something myself and a friend exploited to create a game of “Catch the Pipe” which was extremely fun. The range of weapons is great, the escalating level of tension and frantic nature to some fights is great and all the boss battles were very entertaining, even if they were fairly uneventful.

Streets of Rage 4 keeps a compelling beat throughout the game with awesome combat that’s easy to learn and master, with great level designs and bosses. China Town’s game of death style tower, the train, and police precinct were some of the highlights and the rest being massively fun as well. It could be worth the developer's time in introducing more, dynamic mechanics for a possible 5 game as so few risks are taken with this entry.

Plus there’s plenty of content to keep anyone happy with multiple game modes, 2 players online co-op, and 4 players local co-op. What’s not to like?

What we get is a solid sequel in Streets of Rage 4, with tight, enjoyable combat, great art, and compelling level design. I do wish some more risks would be taken but I see this as kind of the Gears of War 4 or Star Wars: The Force Awakens, where the developers want to find footing, build trust in the fan base while bringing in new ones and hope for the next game, expand greatly on what they’ve learned. I would love to see a Streets of Rage 5 if these talented developers want to make it and I’m sure it will be great. As it stands, this is a great action/fighter game that old and hopefully new fans will surely enjoy.

++ Solid, intense and fun combat
+ The artwork is fantastic!
+ Good level design, a great amount of content and all-rounder just very fun
- There’s a lack of risks or bold, new dynamics which ‘could’ have elevated the experience
- The soundtrack is fine but nowhere near as good as the originals

A Steam review key for Streets of Rage 4 was provided by the publisher for the purpose of this review.