With the success of the Resident Evil 2 and 3 remakes, it seems like the survival horror genre is making a complete and glorious return. However, over the last decade, things were very different and only indie developers wanted to dig up the genre from the grave. One of these developers were Invader Studios who were, funnily enough, working on a fan-made remake of RE2, before Capcom decided to greenlight the official version. We have to thank Invader Studios for their help in highlighting a need for a remake but sadly their fan project had to end. This, however, didn’t stop them and now they have created their homage to 90’s survival horror nearly five years on. Enter Daymare 1998.

Is it a loving homage to 90’s survival horror that shows the best of the genre? Or will it be a nightmare we wished we never entered? 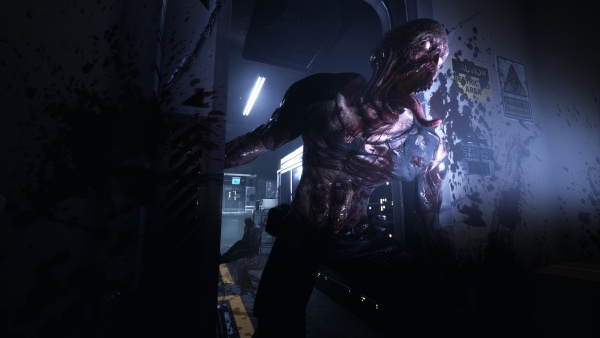 Daymare 1998 is all about the dirty dealings of one pharmaceutical giant, who can’t help themselves from making top-secret biological weapons that cause all manner of Dooms Day scenarios. It’s bad news for them however as one of their labs has an outbreak. This means a small unit of hardened soldiers are sent out to investigate and recover the deadly virus in a race against time. But after a betrayal or two, the unit have now caused an outbreak in a small town nearby, causing everyone to become hideous monsters. Best yet, they’re all trapped within the town and must fight for their very survival. Nice!

So it’s a classic tale of conspiracy, engineered super viruses, monsters, and survival. Daymare 1998 does a pretty good job at setting up a solid foundation, introducing layers of mystery/intrigue and the right amount of fan service and horror flare to engage any survival horror fans like me. There’s a good sense of pacing through the lengthy campaign as you play as a number of survivors, looking to make it out of this nightmare (sorry, Darmare!). Each survivor’s journey takes them through a different environment and having to accomplish a number of objectives.

Daymare 1998 will see players go through secret labs, suburban streets covered in a deadly gas, monster-infested hospitals, sewers and more. While each character you play as doesn’t differ much in skill sets, they all have their own personalities and goals within the story.

Sam is a former soldier who suffers from terrible hallucinations and must deal with the tragic death of his wife, while the city of Keen Sight falls before him. Levi is the bad guy and I will be honest, it was really good to play as him (sadly his story arch is short-lived), and then we have Raven who’s just the new kid looking to make it out alive. However, Raven came across as the best character, often spewing comical one-liners when running out of ammo and sharing his observations at the decaying world.

Each character has a distinct personality and a tie to Keen Sight. There’s plenty of lore and backstory to Daymare 1998, making it pretty weighty in terms of story.

My main gripe with the story was the fact feels overly written in certain aspects. There are some overly long cut scenes that are filled with needless exposition and naff dialogue. I understand the studio is not fluent in English speaking and I can forgive the odd grammar or spelling error. But when there’s hefty amounts of dialogue, long-winded cut scenes which feel unnecessary and documents which go on for 6 – 10 pages, it all feels very first draft to me.

I have no problem with having a survival horror game that has some weight behind the story. There are some interesting aspects, such as ties with an organization that resemble the infamous Unit 731 (don’t Google it, it will give you nightmares!). I liked this but when it came to the long cut scenes, documents which felt more like homework than compelling lore and some naff dialogue (which I feel was not intentional), it all harms what otherwise is a pretty decent plot and story. 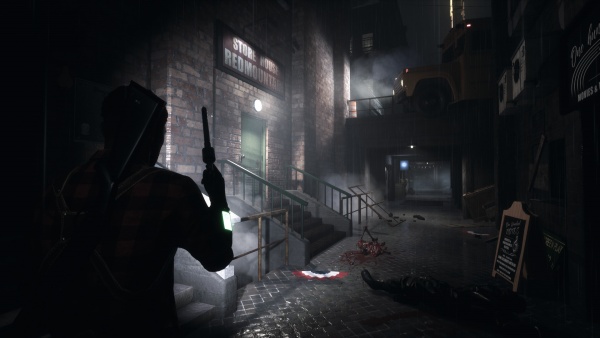 Now Daymare 1998 will feel familiar to those who’ve played either Resident Evil 2 or 3 Remake. It has all the same beats with item management, resource management, puzzles, finding key items, and of course, fighting a number of ungodly abominations.
Puzzles for the part are pretty good and break up the exploration and chaos nicely. Exploration is top-notch with plenty of resources scattered across the environments, feeling very rewarding to those who search out the goods. One of the best things was a number of secret rooms you could find, containing some sweet loot and overall adding a wonderful layer of depth to the level design and backstory.

Combat is a little messy but solid overall. There is a good variation of enemies and the placements for most of them seem well thought out. Some enemies are placed in rather annoying and cheap ambush like locations, meaning you’ll have near to no reaction time, unless you know of their presence prior. Enemy damage is massively inconsistent as the same type of enemy will either take a single body shot to go down or two shotgun blasts.

It’s hit or miss and enemy attacks feel cheap at times. Referring to my previous comment, I had instances where shooting an enemy didn’t knock them back and instead just brought them forward even more quickly. Lending to moments of pure frustration and when these ghouls do grab you, it’s a button mash-athon or tediousness.

Bosses are the weakest aspect as they’re uneventful, dull, and just lack any tension but rather at times, become long-winded and tedious. There is a boss encounter in the sewers which did make me quit the game until the next day and thankfully got by it.
There is sadly a lack of refinement in the presentation and optimization that might turn off some gamers. With some framerate drops, textures popping in and some poor looking visuals here and there. But the level design, puzzle elements, and variation of monsters and environments is really good. When it works, Daymare 1998 works extremely well. The hospital and downtown areas being the major highlights in the game but all levels were pretty fun in one way or another. Plus, the music and sense of dread were great, making Daymare 1998 a pretty intense and unnerving experience, even for a veteran survival horror fan. 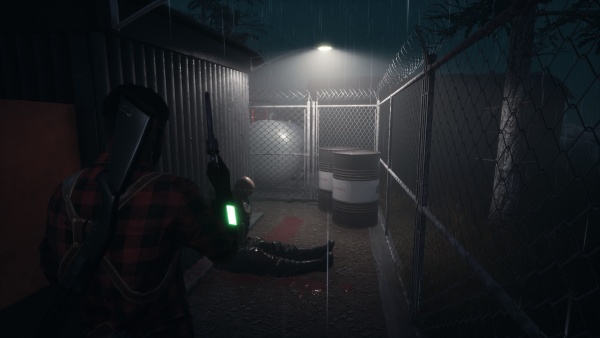 Daymare 1998 sticks to the foundation of the greats, yet adds in a dynamic twist here and there. For starters, players will have to worry even more about their ammo situation as there’s a game mechanic where players will have to manually reload clips for your pistol and machine gun. You do this by opening the inventory (which doesn’t freeze the world around you by the way – neat idea to keep the tension up) and combining ammo with a clip. This leads to a fast and slows reload feature. The slow reload sees you exchange the clip in your gun for one in the inventory while a fast reload, sees players exchange the clip much quicker but dropping the old clip on the floor.

This is a neat idea but flawed when it adds nothing but time and constant trips to the inventory. It’s also redundant when you can simply combine ammo with the gun in the inventory itself, meaning you just don’t need it in the long run. Well only in a very tight situation where you need to reload quickly. This same mechanic was used in Resident Evil Outbreak from 15 years ago and Capcom along with reviewers at the time said it was an interesting idea, but just didn’t add anything except mild frustration.

Daymare 1998 has its ups and downs and I understand this is an independent studio and not Capcom. But the team has clearly been ambitious and what they have mostly is solid. But I feel there needed to be more refinements in movement, tweaks, and improved combat to make it a greater experience. 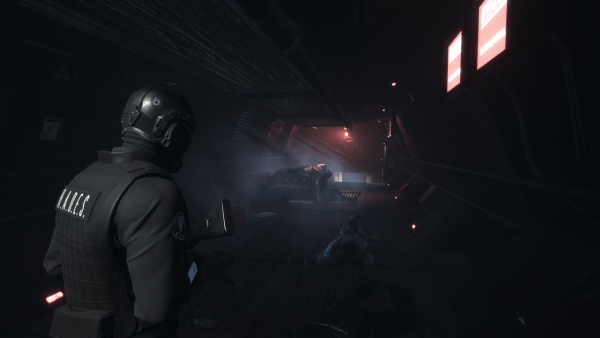 Now Invader Studios is made up of a small team of passionate developers who want nothing more than to create a game based on their experiences with the survival horror genre. These guys and gals love survival horror and it shows absolutely. They’re working with minimal tech and resources compared to Capcom’s outlandish odds. So I give them props for making a wholehearted, substantial, and loving homage to 90’s golden age of survival horror.

I respect their vision and what they have done with the Daymare 1998.

The concept is pretty solid and I do admire the amount of detail the writers have put into the lore and plot. The setup and journey with multiple characters are very interesting and executed well. Every beat from a great survival horror game is here and implement well with some new and neat ideas from Invader Studios. The game looks good for the most part, with the city areas and interior locations looking pretty good and over the atmosphere, tension and dread are spot on. What lacks for Daymare 1998 is the unrefined presentation, that sees choppy framerates, texture pop-ins, and very grim looking outdoor areas (not in a good way). While certain story elements are executed well with long, dull cut-scenes, overly written documents, and an abundance of them, with new dynamics such as the reloading feature not adding much depth to the gameplay and combat suffering from poor boss battles and repetitive enemy designs and cheap deaths.

It’s mixed, to say the least, but the good stuff is worth the ticket of admission and I will say to Invader Studios that, for their first big project, you’ve done extremely well. I would love to see these guys get more funding and work on another survival horror project, that’s more refined and balanced.

Daymare 1998 while having some issues is still a very enjoyable game and I would recommend it to hard-core survival horror fans.

An Xbox One review copy of Daymare 1998 was provided by the publisher for the purpose of this review.