Now it’s never fun moving to a new home as it involves the most boring things imaginable. Believe me, I’ve moved from home to home 4 times in 7 years. It’s a massive pain! Packing, bubble wrapping, making sure everything is secure and lifting is never fun no matter what. But then in modern gaming, talented developers are finding new situations to exploit and put into gaming. Now it seems like moving is one of them? How much fun can a game about moving stuff be? 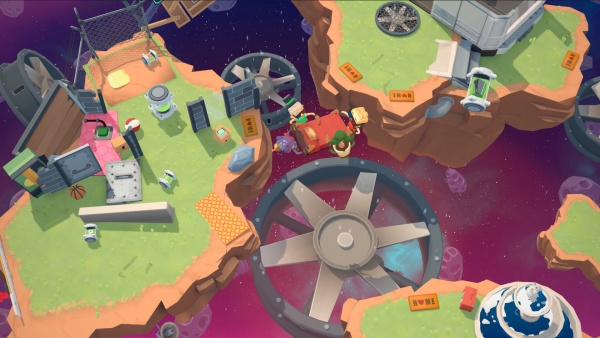 SMG Studio and DEVM Games have managed to create a thrilling and at times frustrating experience that focuses on the joys (I say that sarcastically) of moving. In Moving Out you play as a lovable and gullible employee or known as in the game Furniture Arrangement & Relocation Technician …. Or FART for short. You are basically a FART ….. hehehehe. Basically working for the Smooth Moves company, you have no health insurance, no sick pay, and only the joy of moving boxes and large items into a van in the town of Pack more. It seems like the most unconventional concept for a colorful and fun couch co-op game but both developers do a fantastic job at creating a lively, fun, and energetic game that infuses elements of strategy, quick thinking, and cooperation into one neat package (moving wordplay!).

As a FART, you basically go from one location to another, starting with small homes for new homeowners and going to the most ridiculous situations including moving goods in space and moving jets! You go to a location, asset what needs to be moved and have to do it all within a certain time limit. Usually, most items are small, including TVs, boxes, and game consoles. Then there are large items which include fridges, sofas, and beds. So the objective is simple, you move everything that needs to be moved from the location onto the truck. 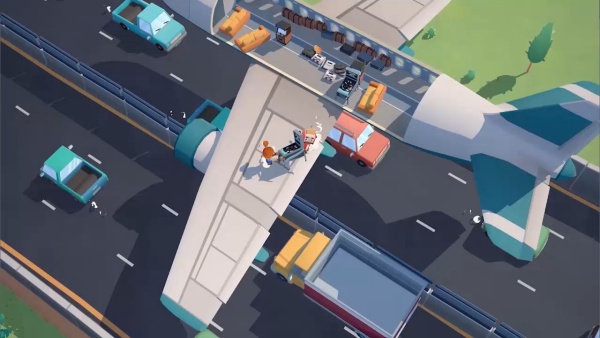 So you’ll be moving everything from fridges to fragile items within a speedy time across a number of environments. Places with plenty of access point to exploit, many tight corners to move large pieces of furniture around, and get mad over! It requires quick thinking and adapting to each and every challenge that escalates over the course of the campaign. Plus the game is pretty funny with sweet, dim-witted banter between the employees who "love there are no sick days, so you can't get sick, thus you can work more". The dialogue between each of the characters is simple but extremely amusing and you grow to adore them until the job is done.

Moving Out is adaptable for a single-player or co-op. basically, if you’re playing single-player, large items can be carried and in co-op, large items require two players to move. Three and more players mean more items and such. I found a single player is a little lonesome and playing with another person is the Bee’s Knees. The only issue here is that it’s local play only. While it’s amazing to have local co-op, it would’ve been nice to have an online feature. Considering at the time of this review, we are in the middle of a pandemic and online play would be great!

It’s a tough job that requires patience and as much skill as possible to ensure a smooth job. Well to be fair if you’re like me and my partner, you’ll be breaking windows, damaging goods, and basically just making up everything as you go along. 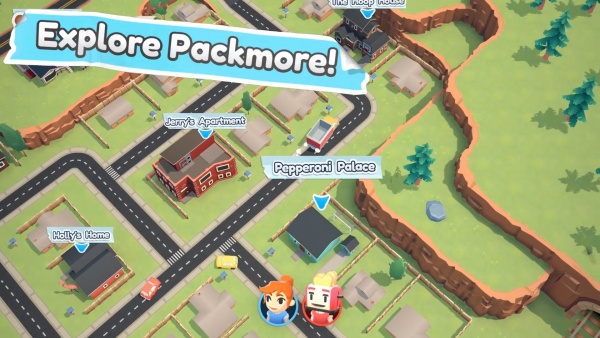 But Moving out doesn’t force you to be neat, but rather to be creative, adapt, and learn as you play. It can be an immense amount of fun to quickly plan and react to the situation. Everything feels as though it keeps moving and the sense of challenge is kept fresh with a nice arrangement of environments, situations, and is extremely rewarding at the end. While the first few levels of the campaign do feel a little samey, the environments expand in scale and detail, with more hazards to avoid, new elements to exploit and increase movement, immense situations such as moving stuff off an active airplane and other obstacles such as ghosts.

FYI: There’s also a slap mechanic where you can slap items, ghosts, or your partner (in the game of course) if they’re doing terribly and won’t listen to your clear and loud instructions.

The reward factor goes even higher with a great collection of unlockable characters and tokens which you can use to unlock mini-games in an arcade. There’s so much on offer in content and the presentation overall is really spectacular with plenty of colours, imaginative characters, and environmental designs and everything feels high in optimization for consoles. 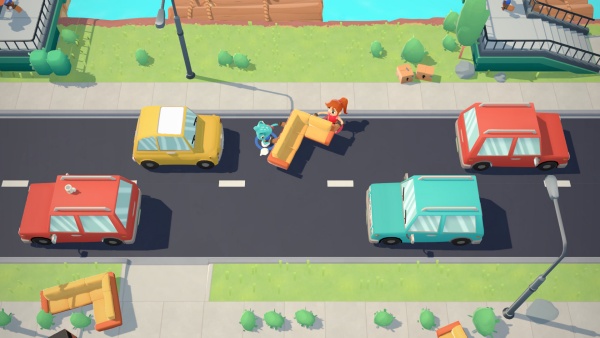 My only major gripe was with some larger items and the physics being an absolute pain in the butt. Items such as the bendy sofa can **** right off!

But that said, Moving Out is extremely energetic, frantic, clever and immensely entertaining that’s fun for all the family. It’s a shame there’s no feature for online co-op and some of the larger items/physics can be an absolute pain, but these are minor things compared to a wonderful little gem.