Top-down brawlers are a great way to pass the time. Especially if you’re locked in during a worldwide pandemic! And “Obey Me” tells us that a demon invasion and all that can certainly make things much worse. So with the world in tatters, it’s up to a dynamic duo to save the day, with a fiery young punk name Vanessa and her dim yet lovable talking mutt who loves to eat any old crap!

Obey Me is the tale of Vanessa and her cute demon-possessed dog hunting down demons as they slowly consume the world before you. You are tasked with finding and killing off key players in this invasion, but not all seem right behind the scenes. So as the night goes on, the mystery and the piles of dead demons build-up while Vanessa is getting madder and madder and her pooch is eating more and more things he really shouldn’t! 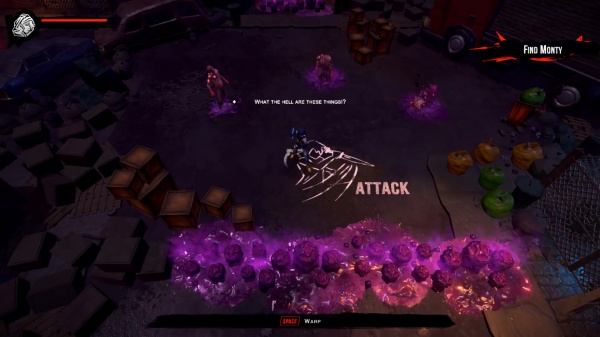 The chemistry is nice between Vanessa and her canine companion with some great lines here and there. The plot itself doesn’t flow with a lot of interesting events, as it’s overly cliché and the main villains are just one note. There were also moments when cut scenes just felt like they were going on and on, with needless and dull filler. It has a couple of twists you can call coming a mile off but overall the story is inoffensive, unmemorable but stable enough as a platform for some decent action and comedy.

But visually speaking, Obey Me is a visually pleasing game to observe and explore. There’s a nice variation of environments from urban streets that are being taken over by outlandish pink goo to Bleak and decaying graveyards where the dead sadly do not rest. The artists have done a great job in creating a compelling world and line up of demons that will gross you out. You can even admire the artwork in the extras menu, along with unlocking some new skins and other bits which add to the replay value overall.

Obey Me is a simple top-down brawler that incorporates many classic elements of the genre well enough. It has a solid and fairly engaging combat system and allows two players to battle the hordes of demons across a multitude of environments. Both characters have their variation of attacks and tactics which lends well to keep most of the combat encounters feeling fresh and varied enough.
Players level up, obtain new weapons across the campaign, and fight a nice variation of monsters and boss battles. I feel one of the strongest elements for Obey Me is the simplicity, allowing anyone to come in and play for the long run or short instances. You can come back anytime and feel as though you don’t need to learn a million and one systems and subsystems; you would with a more complex brawler. Most of the boss battles are vastly enjoyable and multi-layer, making them pretty engaging and brutal encounters compared to many of Diablo 3’s boss battles. 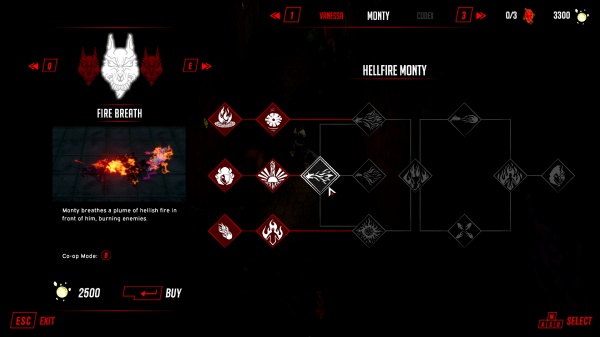 The co-op system is also very interesting as each character has their own unique personalities and methods of attacks which does spice up the gameplay overall. However, Obey Me doesn’t expand on these solid ideas or the foundation to make the game more compelling. Obey Me plays is fairly safe with the level designs being fairly linear with only a handful of small, option areas to explore, overly repetitive nature to encounters where you're locked into an area with (at times), an overabundance of enemies.

I don’t mind having a multitude of enemies to fight, I love a good old fight and an overabundance of enemies works well for games like Doom and Diablo. But Obey Me’s designers fail at times by having such small arenas, usually the wrong mix of enemy types (this is a key gripe of mine and if you want to see good enemy placement –Dark Souls, Bloodborne, Dead Cells) and overuse of environmental hazards which becomes annoying.

I feel these choices might be implemented either due to lack of experience or to try and extend the life of the campaign. To make the game a little more difficult and thus a little longer, as it will last most gamers around 6 – 7 hours from start to finish. 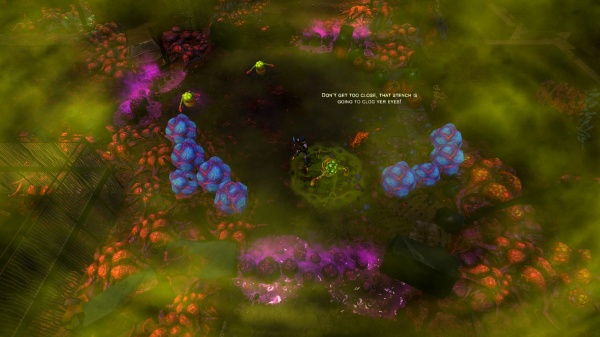 During my time with Obey Me, I did find a number of times where the performance/framerate would drop dramatically. This was not a constant problem and there were no crashes thankfully, but when fighting a group of demons in a tight spot, the last thing you really need is a drop in frame rate.

Obey Me is a fairly enjoyable, solid, and at times fun top-down brawler that’s pretty colorful and visually engaging. However, it falls short with some ill design choices, repetitive nature to the level design, and a rather bland story that doesn’t elevate the comedy elements which are the best thing about it. Overall Obey Me is a decent brawler that you and a friend will enjoy for a few hours and plus its couch co-op … so that’s good if you’re stuck indoors with family or friends, but not so much if you’re by your lonesome!

A PS4 review copy of Obey Me was provided by the publisher for the purpose of this review.