Now I was quite a fan of Doom 2016’s multiplayer. Yes, it was nothing complex but it a simple and engaging multiplayer platform that reminded me of the good old days of Unreal and Quake Tournament. It was wholesome, fun and gave a much more meaningful experience compared to the modern series of Call of Duty multiplayer. Doom Eternal, while having a terrific campaign also offers what could be the ultimate experience and most dynamic multiplayer experience in recent years. 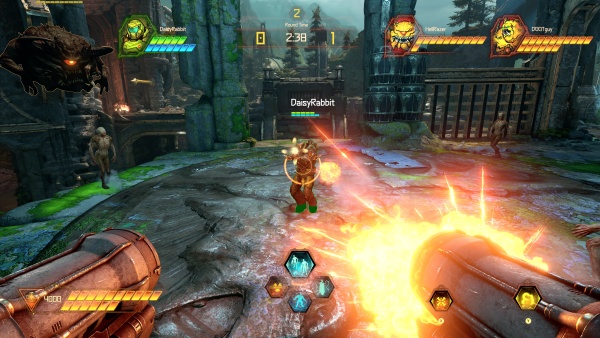 So the main meat on the multiplayer bone is Battlemode, which pits two players against one in a daring and bloodthirsty battle to the death. We have a single-player taking the role of the Doom slayer and the other two are in the bodies of demons. There are five rounds in which either the Doom Slayer has to kill both demons or the Doom slayer meets his demise. The team with the most kills wins. It’s simple, yet it’s a formula that works to introduce competitive and co-operative gameplay into one ruthless and enthralling event.
While it does have the complexity and unique execution as say Hunt: Showdown, it does offer an engaging and hard as nails multiplayer mode that fits perfectly with the nature of Doom Eternal.

Players who are willing to take the role of demons (and it’s definitely worth doing as it’s so much fun!) will have the choice out of some of the more formidable foes. The line-up consists of the Revenant, Arch-Vile, Mancubus, Marauder and the Pain Elemental.
Each of these demons have their unique attacks and powers to use against the Doom slayer while the Slayer himself has all the abilities available in the main campaign, such as dashing, glory kills and having much of his roster of weapons on show.

The main concept is pretty great, testing out the skills of the Slayer against a pair of bloodthirsty demons can bring out some results. There are 6 maps and all of them are a blast to play in, with plenty of altering terrains, traps, defenses and offenses to exploit and gain an advantage with. 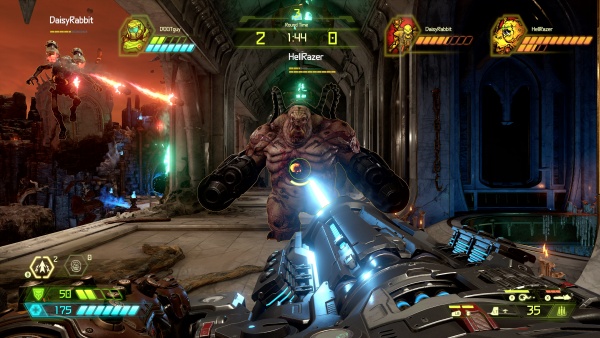 So if you played the campaign and enjoyed the part where you embodied the Revenant (and I’m sure everyone did) then you might be interested in playing as a demon. Why wouldn’t you be? While I love the Doom Slayer, I was thrilled to be in the bloody shoes of a demon (unless you’re a Pain Elemental then you have no shoes). It’s just a different and twisted perspective to enjoy and one which means you can fly, create barriers of fire or be a right pain in the arse as the Marauder. Even though this guy is plenty fun to play as.
Playing as the Doom Slayer is great but playing as a demon in this mode is a lot of fun and after a few hours, you’ll find your true inner demon wanting to come out. After pairing up with a buddy and embarking on a Doom Slayer spree, you’ll find the perfect match. Mine was the Marauder and Revenant as one covered the ground and the other could cover the air.

That’s not to say the Doom slayer doesn’t have a few tricks up his sleeve and at the end of each round, he can pick an upgrade for the next. However, demons can also do the same. Actually, the demons are the most fun and if your skills aren’t as razor-sharp with the Doom slayer, then you might have a problem here. Well for half the mode of least. So this brings me to my one negative. 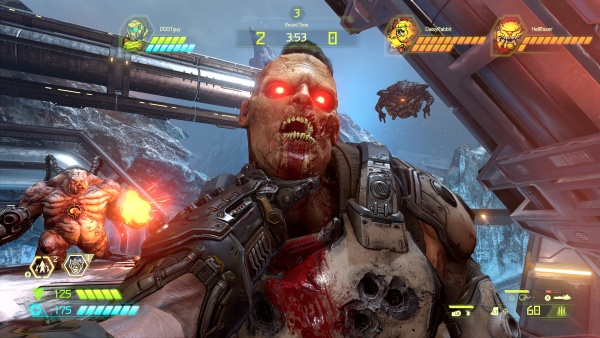 Well, it’s kinda true. The demons are so much fun to play as and with two demons facing against one Slayer, you can see there is a slight advantage given to the demon pair. Of course, the Slayer gets health and all, but the demons, along with fodder demons can land some hefty damage and one wrong move from the Slayer can end his days.

This mode was made for people who played Doom Eternal on Nightmare and crave more. They are literally the Doom Slayer and know every trick in the book. And that’s okay. As those who love Doom but were a little thrown back by the difficulty can relax and know that, playing as a demon is fun and easy to master. While the tutorials are bare-bones, you’ll get the hang of things and before you know it, you’ll be tooting as a Revenant or using the classic Super Shotgun and throwing axe combo of the Marauder (he is so much fun to play as – ID software bring out a whole story campaign for this guy please!). 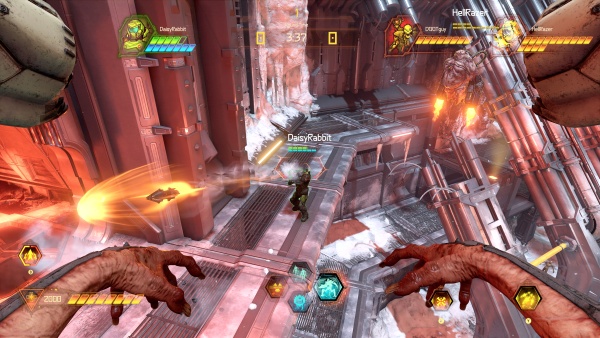 While I find it a little, tiny bit unbalanced as it favours the demons in terms of firepower and general odds. Thus putting some people off from playing as the Slayer, unless you are a master at the game and play on nothing but Nightmare mode.

I can’t deny this isn’t a great multiplayer mode. It’s a perfect mix of competitive and co-operative gameplay that’s filled with insane action, lovable demons to play as and has all the charm, refine execution and grit that the main campaign has. I would like to see maybe an extension where it’s two Slayers and four demons maybe? Just to add in some alterations to balance the playing field a little more, so that everything feels fairer but still crazy as before. Or maybe a system similar to Gears of War 3’s beast mode where gamers playing as Demon starts off as weaker demons then gain strength with each round. Something that could be a little more balanced and dynamic.

But as it stands, it’s a fun multiplayer mode and one of the more interesting to come out in a while. Check it out!

A PS4 review code of Doom Eternal was provided by the publisher for the purpose of this review.