1993’s Doom has a bold legacy and remains as one of the most influential and renowned FPS titles on the planet. Playing as a lone space marine trapped within the UAC facility on Phobos, you come face to face with the armies of Hell. The objective is simple, kill every last demon that stands in your way! With plenty of gore, guns and epic music to accompany such brutal action, Doom has made a name for itself with audiences as one of the most compelling titles in gaming history.

It’s inspired sequels, dozens and dozens of ports as well a couple of movies (which are god awful). But there is one Doom game that remains pretty unheard of and truly deserves more attention. Thankfully Bethesda and Nightdive Studios have re-released the cult classic Doom 64. 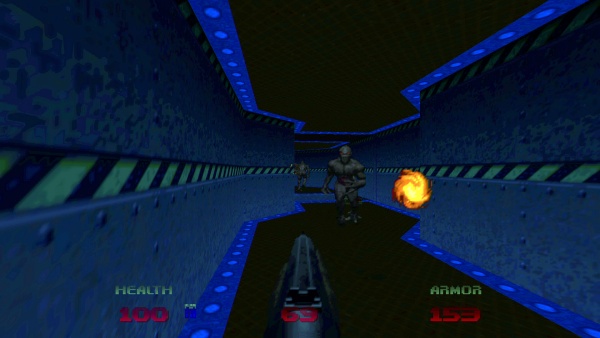 Doom 64 was originally released on the Nintendo 64 in 1997 and to be fair was a rather odd choice considering the console was more family-focused. However Midway brought us this semi-sequel to the original game and it was truly awesome. You play as another space marine sent into Phobos’ UAC base shortly after the events of the original. The base has been filled with radiation in a bid to kill off the remaining demons yet this has not worked so well. After entering the base with a squad of marines, you soon find yourself the lone survivor as your buddies are killed off.

It’s up to you to get the guns, blast the demons away and save the day!

Now Doom 64 is very similar to the original game, near enough identical in the plot but the execution does feel quite different in tone. I would argue this feels like a bridge between 1993’s Doom and Doom 3. By which I mean the foundation of the original masterpiece is there with plenty of shooting, exploring and all the same demons returning. But Doom 64 instead relishes in horror overtones and a dark atmosphere. This in a way feels like a remake of the first game more than a sort of sequel. Just with a greater emphasis on horror.
But that’s not to say it’s like Doom 3. Doom 64 retains much of the brilliant simplicity and engaging gunplay of the original game. You go around the UAC base; you shoot demons with a host of different guns, find keys, gear, new powerful weapons and reach the exit as quickly as possible. So it has all the same elements and for any Doom fans, they’ll feel right at home with this. 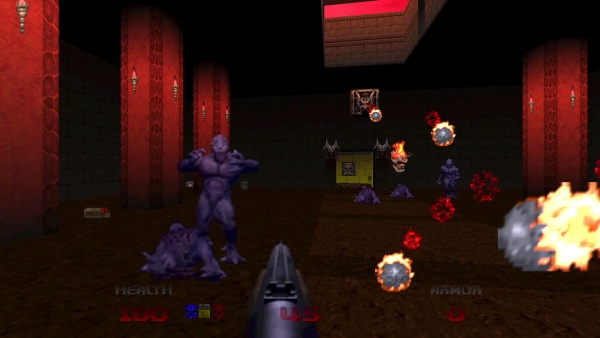 But the small changes do appear. Firstly Bobby Prince’s heavy metal inspired soundtrack is now replaced with a line-up of eerie and disturbing industrial track. These are pretty unsettling and will unnerve you rather than get your blood pumping. I do genuinely like the chance of style for the music and mainly because the visuals match them perfectly. It’s nice to hear something a little darker and uncomfortable, leading to a heightened sense of dread which you would feel if you’re trapped on a moon base filled with demons.
As mentioned the music fits brilliantly with the visuals which are much more intense than the original game. The developers have also done a great job with the use of lighting, shadows and colourized lighting to add depth and atmosphere to the world. Some areas just look bleak, intimidating and downright artistic in some respects. It beats the generic and bland static lighting of the original game and even though many of the textures are reused over and over, it doesn’t feel that way thanks to the clever use of lighting.

In terms of gameplay, you’ll be doing the same thing and that’s shooting and exploring. You’ll get a host of weapons such as pistol, shotgun, Super shotgun, chaingun, rocket launcher and of course the BFG. Plus there’s a bonus weapon known as the Unmaykr which actually appears in Doom Eternal. This is a powerful rapid-fire demon gun, in which you can increase its power by finding and exploring secret levels. This was a nice surprise and one that took the whole concept of secrets in a Doom game to the next level. The gunplay, if nothing major compared to today’s standard, is solid and fun.

There’s plenty of demons to kill in a number of environments, made up of tight corridors, large open spaces with plenty of cover and hellish landscapes that present dubious hazards to ruin your day. Demons are varied and all are of the same roster of the original game yet with some great redesigns. Everything looks a lot more intense and clearly designed to be much creepier in presentation, fitting to the horror overtones. I believe this change of tone is all largely to the success of Resident Evil and Midway did an amazing job at shifting Doom’s tone overall. 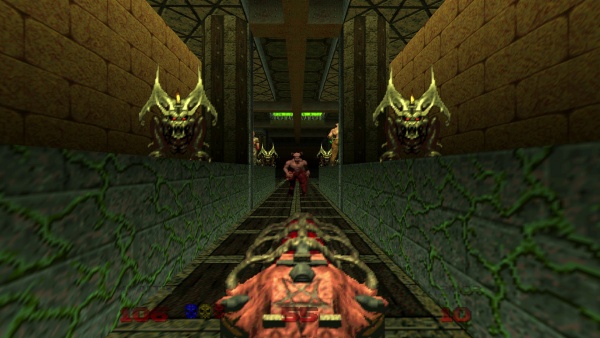 Level design is largely good for the most part, with plenty of creative set pieces and enemy placement. There were some tedious maze-like areas and the key hunting objective does get a little old towards the end of the game. Especially when you have to backtrack repeatedly in order to find out what door a random switched opened. But there are more good levels than bad with many different layouts, altering in complexity and often featuring plenty of ambushes, secret areas and the odd puzzle here and there to break things up.

Puzzles are more of a guessing game rather than requiring intelligence and boil down to trial and error, yet I appreciated the thought and inclusion. Bosses are fine but the repeated use of the Cyber Demon was a little disappointing and overall, a shame to see the developer not include more bosses of their own design. However all the boss fights have inventive environments and my favorite encounter was where you were trapped within a testing ground for new weapons, which alters and changes making it difficult to hide.
The gameplay is solid and I highly recommend any Doom fan to play on the highest difficulty to ensure more demons and a real challenge. Lower difficulties feel more like a survival horror game which is kind of neat, but playing on “Watch me Die” is the real way forward! 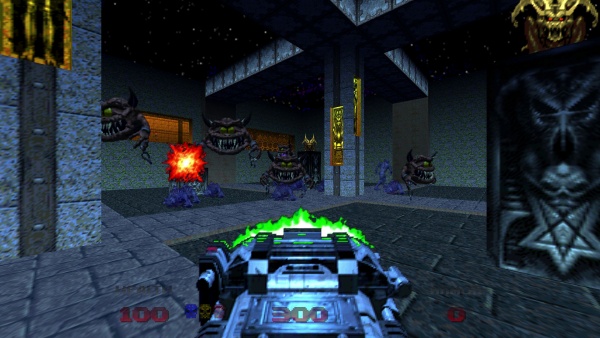 Overall Nightdive studios have done a great job with this remaster as everything runs smoothly and looks excellent. My only real problem is with some of the enemy balancing in later levels and the ugly HUD for the game. The original had a great HUD with the Doom Guy’s face acting as an indication for your health. It’s iconic and here in Doom 64, it’s a bland and pretty forgettable red-letter font. It’s easy to not see it when the action really picks up.

However, this is a solid remaster of a classic game that shouldn’t be forgotten. I remember this being quite a distinctive FPS experience and it’s a solid game that actually beats the original in some ways. I highly recommend you pick this up and considering its low, low price, you would be a fool not too pick it up.