So I’m an oldie who was around the Golden era of survival horror back in the late ’90s. So I played Resident Evil, Dino Crisis, Silent Hill and many more. These were some of my favorites as a kid and I loved the spooky themes, monster designs and yes, even the tank controls. Then Survival horror changed or more so died and came back. While slowly but surely the revival of survival is underway, more indie developers are rekindling their love for the genre and creating a host of throwbacks. Dawn of Fear is one of those throwbacks and has got quite a few people excited.

Dawn of Fear is a homage/re-creation of the old ways of survival horror. We’re talking the full works including tank controls, head-scratching puzzles, resource management and scary monsters in a big house. Dawn of Fear has all these wonderful things and even throws in a decent B movie plot. The plot revolves around a young man with a troubled past, setting off to his old family home in order to find out some harsh truths. However, while exploring the mansion, he comes across some disturbing creatures and soon enough, he finds himself trapped within his old home. 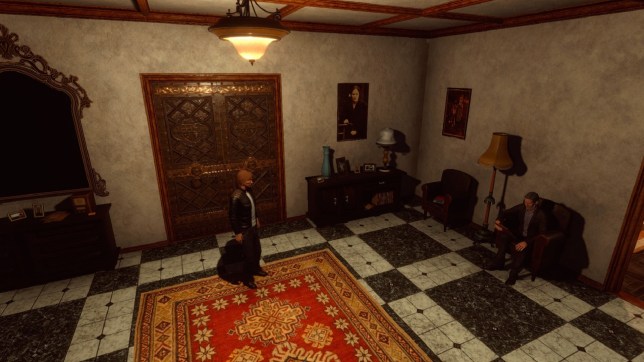 It’s up to him to find out the cause of this disturbing evil and to put a stop to it before he becomes a creature of the undead.
While it’s not an entirely original concept nor does it go in any interesting directions. The B movie story is fine, offering enough mystery and suspense for the most part (sadly it’s a little obvious who’s behind it). But there are enough documents to add some lore behind the main story and add another layer to the world. Dawn of Fear manages to mimic the older Resident Evil if not as well.

So the story is on the right track but what about the gameplay? Surely with so many great games, many of them classics to gaming in general, you’d expect these guys to do a decent job right? When it comes to gameplay Dawn of Fear has the right mind-set by blending extreme violence, lateral thinking, and exploration. Players will explore a large and complex environment (your classic spooky mansion in this case) and be tasked with finding key items and solving a number of puzzles to progress further. There are also a number of monsters in each of the many rooms which you’ll have to deal with in one way or the other.

There will be a restriction of resources throughout your journey, meaning you’ll need to conserve ammo and health. But players who pay close attention to their surroundings may pick up useful items and new weapons, which do help out in a tight situation.

When it comes to resource management it’s not entirely fleshed out. You will have limited resources including ammo and health, but the size of the inventory won’t be an issue at all. You can carry as little or as much as you like without having to sacrifice items or store them away. This is fine as quite a few survival games ditched this idea and the game is not long enough to really warrant it.

While it has all the right elements, Dawn of Fear has some missteps when executing them. Don’t get me wrong, there are some things it nails like the soundtrack which is really good, adding to the atmosphere and intensity. Then there’s the sharp visuals and some great fixed camera shots (and the not so good ones – more on that later). Okay so we have the spooky mansion, zombies, low resources, the exploration and all but it’s somewhat underwhelming. The tank controls are a nice touch and feel like something from a 90’s horror game, but aiming is a real issue. 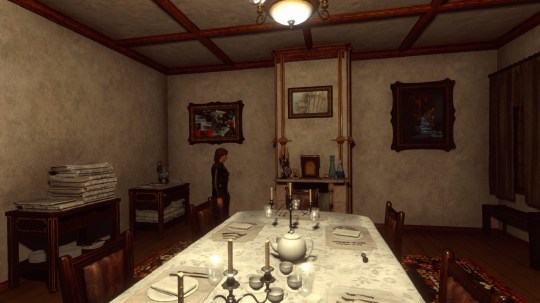 As mentioned Dawn of Fear goes for fixed cameras and it’s a neat touch while executed mostly well. But then some areas are just presented wrong, with a camera shot that’s too far away, meaning it’s difficult to gauge the distance or direction of an enemy. Plus it also means some items blend in the backdrop too well. This could mean you’ll struggle to interact with a door as the camera barely shows it properly. It’s more infuriating when you’re chased by an enemy and don’t get me started on some of the cheap shots this game pulls. I can walk into a new area and right in front of me is an enemy. I don’t know as the enemy won’t move forward unless I proceed and allow the camera to change. So you will have to be careful when exploring certain areas.

Resident Evil managed to do the fixed camera well as it was never too far away. The environment was compact and flowed naturally and the camera angles never felt too spaced apart. There is a golden rule in film making known as the 180-degree rule. Basically, when you have a scene, you never spread the camera shots too far apart otherwise the scene feels disjointed when edited together. I feel this applies to fixed camera angles in survival horror games. Dawn of Fear does the fixed camera treatment well but there are moments it can be somewhat disorientating and annoying when it comes to combat/quick escapes.

Then there are the bugs. Wow, I was shocked at how many times the room would disappear, missing particle effects and just some poor animations were presented. Not to mention the lack of balancing in key areas. While I praise the developers for adding random enemies through the game so backtracking doesn’t become tedious. You need to compensate with more ammo and other resources. There were areas filled with enemies and getting past these were slightly unbearable. I did lose my patience at times but I finally gave up for a while when I saved a game, came back to it and found an enemy right next to me, resulting in my death.

Save rooms. They’re safe heavens with no enemies. Save points in survival horror games do not have enemies. Basic rule!
So yeah Dawn of Fear is disappointing when you add up all the bad things discovered in this review. On the one hand, you have a decent throwback to older survival horror games which has great enemy designs, decent exploration, nice visuals, and a great soundtrack.

But when you consider the overwhelming number of bugs, balancing issues, the short length, and some underdeveloped gameplay elements, it’s far from something like Daymare: 1999. I do admire these guys for what they have done but this was not ready for release. The bugs became a complete annoyance by the halfway point and the tedious trial and error/balancing problems made it a chore.

Hopefully, the team will fix these issues and if so, we’ll have a decent game. But just not now sadly.