Now there’s a massive fan base who adore the Dark Souls games and nothing can come close. Except for Bloodborne but even that wasn’t on the same level to the fans (disclaimer – I love Bloodborne but ain’t so hot on the Dark Souls games). Why do I mention this? Well to be frank the fans can be a little douchey and The Surge which came out in 2017 didn’t get the hottest reception from the Souls fans. In fact many of the outright hated it. I thought this was pretty harsh as there were some unique ideas and dynamics which helped shake up the formula, yet there were some issues. So with The Surge 2, will Deck 13 iron out the wrinkles and make this a Dark Souls killer?

Read on to find out. 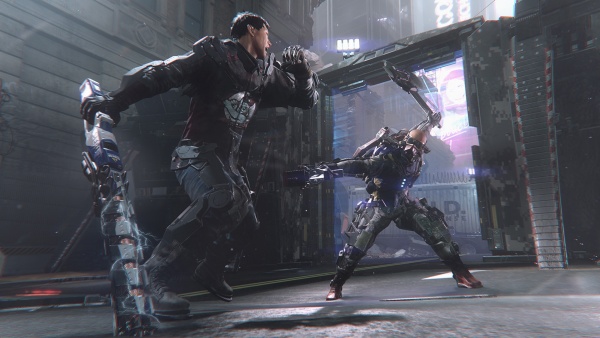 The Surge 2 takes players into the fine region known as Jericho City which has now been overrun by the Defrag plague (computer puns! There’s plenty more). Starting afresh, you’re no longer players as Warren the protagonist of the first game but an entirely new character you can create freely. One of the new elements implemented and inspired from Dark Souls. Awakening from a coma after a near death experience in a plane crash, you find yourself in the middle of a collapsing city where everyone is trying to survive by any means possible. Even to dismember and take components to become stronger, faster and more deadly. It’s a race against the clock to find a young girl who might help resolve the defrag epidemic.

Now on the one hand I do like how Deck 13 has given full control to the player in allowing them to design their very own character. It’s in keeping with the Souls games and it means players can implement themselves into the game. I personally did like what the original Surge did, giving you a more personal story with a main character you could relate too and who had some emotional weight in the journey. The first ten minutes of The Surge displayed some showcased some excellent writing and here, it’s simplified. But that’s not a bad thing as there’s plenty of lore, interesting characters and the world is immensely enticing. Do I miss the more personal, character driven journey? Sure I do. But do I recommend this type of approach in The Surge 2? Well sure, it works for Dark Souls and Bloodborne, so it works here rather well.

In regards to gameplay, there is a simple yet highly effective formula to the Souls games. Such as progressing a vast world, battling difficult foes, unlocking new secrets and paths through exploration and experiencing death over and over in order to grow. Plus it’s about cover coming punishment and learning from your mistakes. Well The Surge 2 does get the world building and level design down to a fine art. I respect the designers who crafted a very complex yet engaging world, making sure your journey keeps expanding at the right pace. Unlocking new areas, finding new paths, discovering secrets and overall feeling like the world is living and breathing.
The combat is also pretty great. The Surge 2 expands on the original and offers more choice, evolved tactics and even more aggressive encounters. On a base level, players will hack and slash their way through scattered enemies across Jericho City. Mixing light attacks, heavy attacks, evasion and countering with perfect timing in order to prevail. What sets The Surge above the rest is the more strategic elements within the combat.

For those who didn’t play the last game, players will need to evolve their skills and craft new gear in order to better protect themselves. This is done through the typical practice of gathering the game’s version of Souls but also to dismember and collect various body parts from enemies. It’s an extreme method of evolving within a game but one that’s utterly captivating. It involves planning, patience and the right timing to ensure you get an arm you’ve not obtained yet, unlocking a new set of armour to craft. That’s how it works. You obtain parts which belong to enemies wearing certain types of armour. Gather all parts from arms, legs, torso and head and you can replicate a full set. Gather more and you can use them to improve and upgrade your existing armour.

It’s a fascinating way to progress and one that feels natural. I will admit there are times where you will farm and face some grind, but it’s just a pleasant, comfortable grind that you know will reward you. It keeps you motivated in pushing forward and discovering new enemies gives you a new type of high. Knowing you can evolve your character more and more by exploring new areas, defeating and dismembering new enemies.

There’s a good variation of enemies too, with those with heavy, light and ranged attacks, many having interesting behaviours and patterns you can remember and recognise on repeated play throughs. Thus adding to layer of learning and just making you feel more bad ass when you defeat a group of enemies who once punished you, can now be torn to shreds and only taking a dozen retries. It’s fun and paced well despite some grind.

Another thing improved is the number of bosses compared to the original. This was a key complaint as Souls games have quite a few bosses. Just like Souls though is that the bosses are genuinely a mixed bag. Some are absolutely tough but can be dealt with by learning patterns and being patient. Others are just sponges and only can be dealt with by levelling up to ungodly levels. This is where the grind can be annoying and it would’ve been much more damaging if the world wasn’t so big and allowed you to put aside a boss and come back to it later. But some of these are unforgivable as they’re the main bosses in the story and it can hold the story progression dead in its tracks until you’ve beefed up a fair bit.

Prime example was a boss early on, Little Johnny who is actually the enemy featured in the posters, cover art and promotional material. He is a massive d*** and a complete sponge. Now, the plan to defeat him sounds easy enough, hit some coolant tanks across his body. Three of them are fine, the last two are in such a place that it’s extremely difficult to get too, unless he stomps you. So avoiding, smashing and repeating this for what felt like forever wasn’t fun. I had to venture into a new area, face extremely tough enemies and come back to beat him. Nightmare! So the pacing can be killed here and there and I know this is a Souls like game but Dark Souls knew how to do bosses properly. They would take the time to carefully place out enemies and ensured you had resources to beat bosses. Things such as hinting at weaknesses, laying out key objects that could help in defeating bosses and even giving co-op here and there to help out.

Now aside from this, the difficult is tuned out pretty well. Although Deck 13 clearly want to up the pressure by having timers on collecting dropped resources, not allowing you to carry health indefinitely and having plenty of traps set up across the world. It’s still not that difficult. I mean, it’s tough but if you’ve played a few Souls like games, this isn’t so bad. Despite Deck 13 really pushing the limits on difficulty.

Overall is The Surge 2 perfect? No. Is it a damn good Souls like game, the best Deck 13 have made and one that is pretty much close enough to the best Dark Souls game? Yes. Even for those who don’t like Souls games I believe the Surge 2 is definitely a great starting point or more than enough for non-fans to try out. The Surge 2 improves from the original and adds enough to make this a refreshing journey that’s paying homage to the Souls series and also adding stuff to make it more interesting. Beautiful world, compelling means to level up and of course, plenty of intense difficulty to overcome!