Now I’m a good Catholic …. Well mostly. And I do know a thing or two about the horror of eternal torment and suffering. Believe me I worked in retail. But gamers also know a thing or two about suffering (especially ones who work in retail) when it comes to games in the Soul’s genre and those inspired by it. But looking further back, the old Metroidvania games were beats themselves and often tortured younger gamers with more gruelling and punishing tactics. Well, glad The Game Kitchen have developed a game that’s all about pain and suffering, with elements of said genres mentioned above. Is the pain worth it? 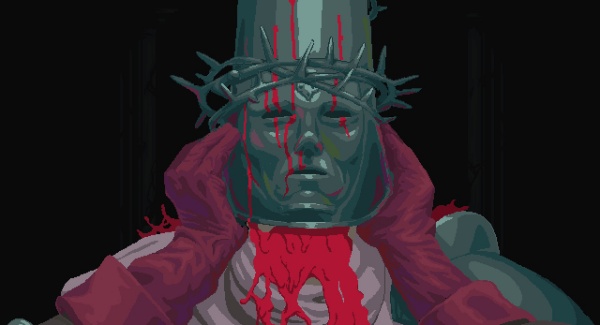 Blasphemous is a 2D pixel art Metroidvania that has elements of the Souls’ genre. Something that may not seem new currently but these games have been very popular and new indie developers do manage to implement something fresh in each one. Even Chasm had its charm and good points. But The Gaming Kitchen have gone all out to craft not only a beautiful looking Metroidvania game but one that’s captivating!

You take on the role of the Penitent One, the last remaining holy warrior in a troubled land. You awaken surrounded by hundreds of dead bodies and the only people left in the land are devout believers of the wondrous and terrifying sounding “Miracle”. There are also a large number of monstrous beasts that want to feed on your bloody carcass. There’s plenty wrong with the world of Blasphemous and everyone in it is suffering in their own way.

Blasphemous has a beautiful look that’s both gorgeous and absolutely horrifying. The backgrounds are wonderful, the environments are highly detailed and the enemies are completely disgusting (if not enticing to look at). Everything has purpose and the team of artists behind Blasphemous must have spent hundreds of hours to research and design the world and everything in it. All the enmies have purpose and a certain form of torture attached to them. This reminded me of The Suffering where all the enemies revolved around the theme of capital punishment. It was neat, all the little details, the design of every object and the overall world design are just impressive for a 64 bit inspired game. 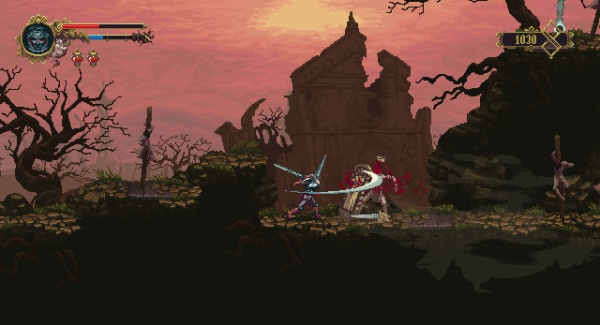 Gameplay is simple yet highly effective. Combat is basic for the most part, with the simple attacks, dogding mechanic and some special abilities that can be acquired via certain upgrade points. While there is not a vast amount of upgradable attacks, they are effective and there’s a huge amount of magical abilities (known as Prayers) you can obtain. Blasphemous also takes another note from the Suffering where enemies represent some form of gothic torture or religious theme and they all look great. Many of them are pretty annoying at first, but you need to figure out moves and after a little while, they’re a mild nonsense and fun to fight. The only problem was the ranged enemies and the ghosts in the library. They’re just annoying and can be a little overwhelming.

Bosses are pretty entertaining and range from smaller, more agile bad asses to gigantic fiends who smash and squash the player with a single blow. The larger bosses are visually impressive but it’s pretty easy to evade their attacks and just need a good slashing to put down. Smaller bosses are much more challenging and despite how powerful you are, do still pose a unique challenge. 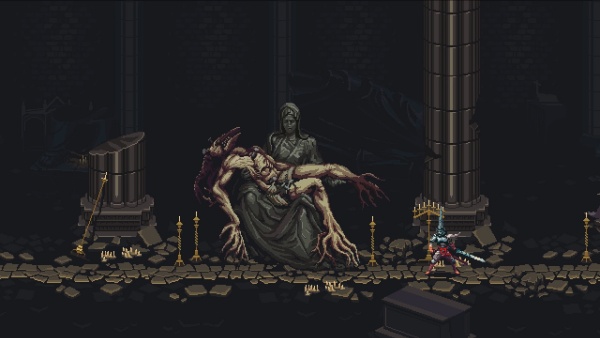 Much like a classic Metroidvania, Blasphemous sets players a simple task, allowing them to get there via one of multiple routes and then for good measure, letting players figure out the rest for themselves. So at the beginning you are tasked with killing three highly powerful monsters. Once this is done, you will embark on the second half of the game which is more about exploration and piecing together where to go.

In other words, you just have to explore, figure out the right path and go to the end goal. This means there’s plenty of backtracking; go back to areas when you’ve acquired a new upgrade. Now I did get lost at some stages and there are reasons. Firstly some of the clues on certain key objects are so vague; you’ll have a problem figuring them out. The maps displays rooms you’ve not explored as explored so you can miss rooms very easily, which I did and also some sections are a chore to go through with some of the worse elements from the Metroidvania genre. So the pacing can be slowed right down.

I mean having large rooms filled with moving platforms, spiked floors and swinging pendulums is such a pain!

A lack of direction is present in the third act, but I did end up figuring out the most important stuff after an hour to so. Blasphemous does offer a great sense of exploration and figuring stuff out, but unlike another game such as Hollow Knight, there are things in that game which enhances the exploration and makes it non so tedious.

So you’ll have to write notes down on paper and remember a fair amount of where items are as this game offers no such hints in regards to that. 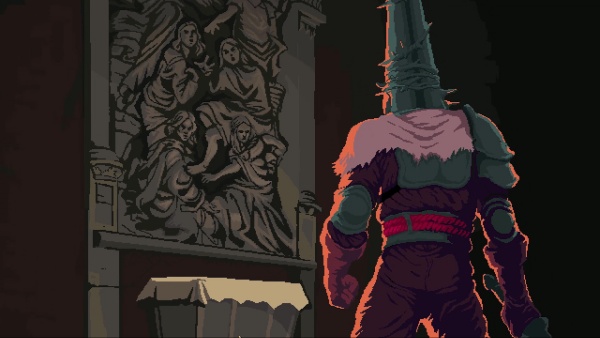 Thankfully the map is interesting to explore and it really is fun to figure out the more coherent objectives. There are a number of sections, each having its own distinct visual style, enemies and lore. All very interesting visually and great to explore (except for the rooftops – i.e. plenty of spikes and moving platforms). There was also a few moments of interaction that were pretty incoherent, such as how some platforms could only be grabbed from one side and others where both sides. How pixel perfect you had to be with some of your jumps to avoid death, or how you could get hit by a ranged attack and each time it would have a different reaction. Meaning nothing harmless or certain death!

My journey with Blasphemous has been interesting. On the one hand there has been plenty of swearing, frustration, confusion and rage quitting. I disliked some of the poorer aspects from classic Metroidvania games, the lack of direction and the immense backtracking. But, these issues actually don’t damage what is a pretty outstanding game. Blasphemous has a beautiful art style, simple yet solid combat, an awesome world to explore and actually some pretty amazing lore/story to explore. This is a stellar indie title and above all an amazing metroidvania title that puts other recent titles to shame.