It would be an understatement to say Rogue-Lites were one of the most popular video game genres in recent memory. And it’s easy to see why the genre is so popular, with a gripping flow, that presents interesting trial and error gameplay that if the handled right could be phenomenal. Just look at 2020’s masterpiece Hades, or even further back to The Binding of Isaac. Do you know what is massively popular too? Lovecraft and Cosmic Horror. Aside from Lovecraft himself is a questionable character, his genre of horror has inspired many creative minds and properties. So, why not combine the two together?

Well, thanks to the publishers, they have given me a chance to take a look at Madshot while it’s in Early Access. I present you a preview of the upcoming horror theme Rogue-lite, Madshot. Does it hold promise? Or should it be left behind in the unknown voids of horror? 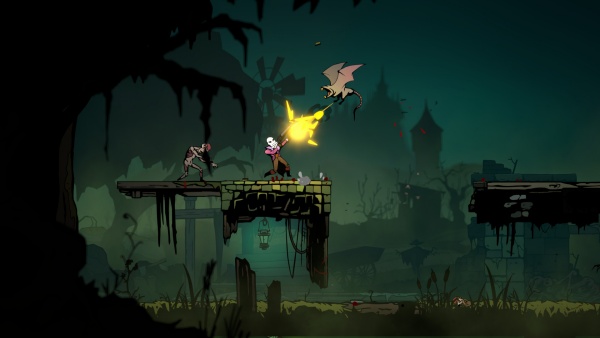 Madshot is an intense, fast-paced, and gory Cosmic horror Rogue-Lite with a focus on acrobatic gunplay, otherworldly character progression, and facing an ever-changing world with multiple paths leading to many risks and rewards.

With a never-ending procedurally generated world, Madshot presents plenty of brutal encounters, moments of certain death yet plenty of opportunities to become a stronger supernatural slayer of the Cosmos, with new weapons, abilities, and much more. You’ll have very limited resources, to begin with, but enough to get you by, including your awesome ability to jump around like you’re a top performer from Cirque du Soleil, which helps you to avoid enemy attacks and gain tactical advantages across the arena.

Madshot offers players the to make their own path through each of the many stages, with multiple routes to take. Some paths might be shorter, yet hold little in rewards, while others have increased dangers yet provide benefits towards your overall character progression. There is an emphasis on creating a build that suits your playstyle with plenty of choices for abilities, weapons, and powerups. There are bosses, plenty of secrets, and skills you can upgrade, making each run a little less brutal, yet keeping the fun factor very high.

So, Madshot has all the right elements of a solid Rogue-Like but thankfully has a few tricks up its sleeve to make it distinguished from the rest.

This is a tale of love, sacrifice, and dealing death to the lord of the cosmos to gain ultimate power. Playing as a rather angry chap who wears an octopus mask, players must venture into the world of madness, fighting their way through the ranks of the ultimate lord of the unknown and horror. Starting with very little, players must fight their way through a series of arenas, gathering upgrade tokens, new weapons, and other supernatural items that will help them throughout this venture into madness.

Madshot provides a certain advantage to players with a character who’s incredibly acrobatic and able to jump his way around each arena, avoiding death and gaining a tactical advantage where possible. All the arenas are crafted beautifully well to get the most from this mechanic, as players will be dancing the dance, leaping from walls, and avoiding certain death to progress further. It’s elevated by the excellent gunplay at hand too, as players will surely be pulling off epic moves you’ve seen in John Wick and the Matrix. But if you want to get up close and personal, you can obtain and equip melee weapons too, in case of an emergency.

There’s a good amount of flexibility when traversing around the arena, and the levels themselves are strong in their design. I did notice there was a lack of variety for most instances in level design, and the same kind of layouts and formats would repeat. Games like Hades would thrive on different types of encounters and even though the level design would be simple, the design would incorporate new dangers, challenges, and special events.

My time with Madshot saw plenty of action, with multiple types of enemies, but not many special events or particularly compelling level designs. Still, the general structures do elevate the acrobatic style gameplay and enhance the intensity and tactical manoeuvres you can achieve.
But much like Hades, Madshot allows you to carve your own path through each of the many stages, picking routes that might be shorter yet lack good loot, or picking tougher yet more rewardable ventures to the big boss at the end. You can experiment with different paths and obtain the loot you feel is most needed. Want to do a run where you gather upgrade tokens or complete challenges? You can do that, and each run does feel quite different as you can find special rooms with new weapons and find secret encounters in some arenas where you can make highly profitable, yet highly dangerous trades.

As mentioned previously, I think the lack of challenge rooms or massive events is felt here, especially on repeated playthroughs. If the developers wanted to look for some more inspiration, look at Hades and incorporate more special events and maybe especially difficult challenge rooms which pay off in a massive reward!


Master of the Dark Arts 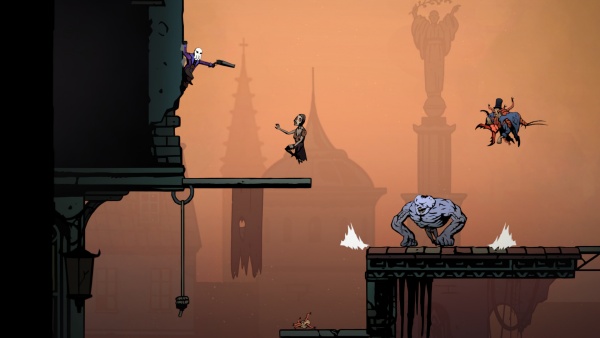 Madshot has a wide variety of powers to master and special weapons to pick up on your travels. You’ll be able to obtain permanent perks, allowing you to deal higher critical damage or dodge more efficiently. But throughout your adventure, you can pick up other powerups and skills along the way, making you even more deadly in combat. Whether it’s obtaining an extra bullet in your weapon after each kill, or shooting poison gas that deals long-lasting damage, there are plenty of perks for your Octopus mask-wearing slayer.

In each arena there are also throwable items, many are simple, destructive items such as barrels and blocks of stone. Others will tame an enemy into an ally state, cause poison damage, and so forth. This really helped with crowd control and added a nice tactical edge. This, the perks and the marvelous movement really did help in making the combat energetic and fun, as the weapons are fine if not a little dull after prolonged usage. I hope maybe in a future update, we get to see weapon upgrades and modifiers attached to them, making them a little more awesome to use.

What I did really like about Madshot was the number of buffs and special abilities on offer, and pretty much all of them (so far seeing what I did see) were incredibly useful. A lot of Rogue-Lites that operate on the “Give lots of variety and choice” often fall into the same problem where much of what is on offer doesn’t really stand out, nor is helpful to 99% of players. Even some of the greats like Hades do this, whereas many of the Boons just suck and even when upgraded still suck. Madshot’s selection of perks, powerups, and abilities really did make sense and were pretty much all helpful in some (barring maybe a couple which was still fine).
I’m usually the type of guy who doesn’t do the high-risk and reward thing, like with the haunted chests in Dead Cells. But here, Madshot made all these moments very tempting to even someone as prudish as me.

My last main observation would be with enemies, as there is a really good lineup of them and visually, they look awesome! But most of them have the same behaviour and just B-Line for you. I can see the influence DOOM Eternal has had and it really shows in many positive ways. But DOOM and some other games all have a good roster of enemies, all of whom have different tactics and approaches to combat. Again, maybe in the late game, there will be special/heavy enemies or maybe just some more interesting fodder enemies to spice things up a bit.

But the combat is a lot of fun, with the energetic movement, visually creative arenas/enemies and impactful weapon damage, and awesome abilities. All of these do help make the multiple runs entertaining and fresh each time, but hopefully, some challenge/special arenas can be implemented, some new weapon upgrades are made available, and a couple more interesting enemy behaviours. 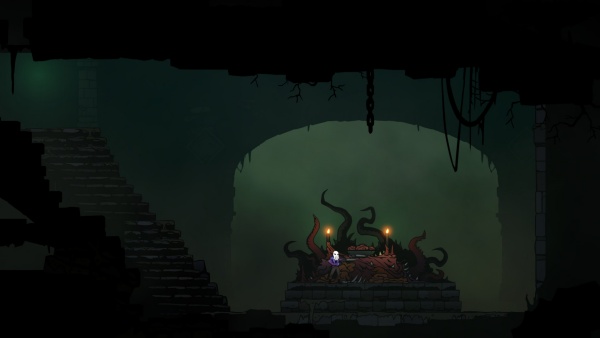 A quick note on the presentation. As you may have gathered, Madshot is visually pleasing and looks very much like a loving tribute to a 2000’s webcomic, in all the best possible ways. But the soundtrack is freaking amazing! The metal tracks fit so well into the energetic gameplay and thematic elements of Madshot. It’s really darn good!

Madshot has a lot of promise as it’s a compelling, brutal, and immensely satisfying rogue-Lite, but could do with a couple more elements to really flesh out the formula. The energetic acrobatic movement makes traversing, evasion, and fighting a lot of fun, with plenty of perks and buffs to keep each run refreshing and fun. I love the visual style and soundtrack, and the Cosmos themes and supernatural elements have been implemented well, making it feel slightly different from what we’ve seen many times before with other Cthulhu-influenced games.

I can see Madshot being a leader in the genre if the devs keep on the right track and adding a few more bits mention above. But so far, Madshot is damn good! Check out Madshot on Steam Early Access right now!


A Steam preview key of Madshot was provided by the publishers for the purpose of this preview.