Survival games are dime and dozen nowadays, but the genre keeps on thriving with new titles emerging every other day in the gaming world. The genre has become one of the most popular in recent memory and it’s not slowing down, despite the hundreds of games in the genre already. I myself have dappled in many quests of looking for food, shelter, and warmth in order to survive, but never stuck with them for the long run. Upon playing Above Snakes in the June Steam Next Fest, I found myself utterly captivated and wanting more as the world expanded before me.

The publishers have very kindly provided a preview key to Above Snakes, allowing me to check out even more than the demo!


What is Above Snakes? 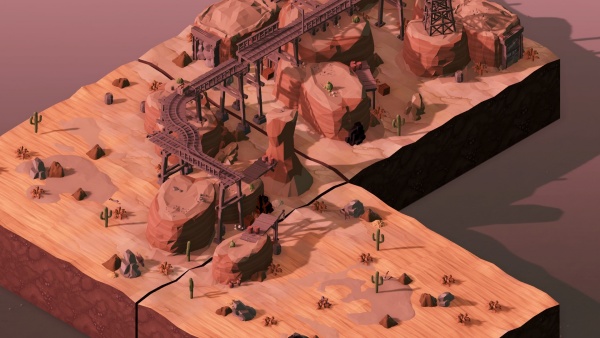 Above Snakes is an isometric survival game heavily inspired by the American Frontier, where resources were low, exploration could mean certain death, and worst of all, in this world the undead walk the Earth.

You play as a lone tribal descendant of the land, who’s doing all that she can to survive the horrific events occurring around her. During one still and somber night, from the midnight sky came a bright green light, followed shortly after by flaming stones which landed in the town of Corpse Creek. The devastating incident took the lives of many townspeople, but not long after this horrific event, the undead raised from their graves and ran havoc across the town. Soon enough, survivors fled the town to find safety, but the undead followed and the land around Corpse Creek became even more dangerous.

Your goal to scavenge the land to collect vital resources, help those in need who fled from Corpse Creek and deal with the undead before they consume your flesh. You can build your own home, harvest resources from the land including timber, berries, fiber, stone, and much more, and defend yourself with an arrangement of hand-crafted weapons against the undead.

Above Snakes has all the right elements of a classic survival game but manages to bring in some neat ideas and dynamics which were the reasons I became thoroughly immersed in the world and gameplay.


A survival game you control 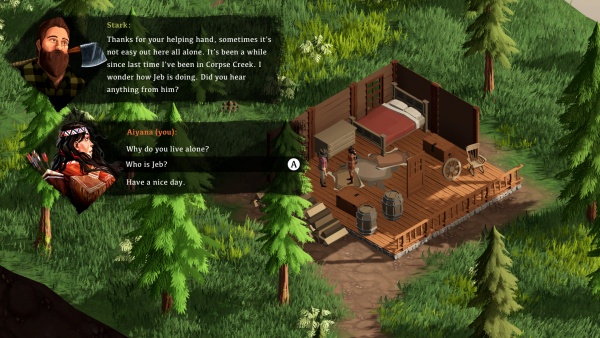 We have all the right elements for a solid survival game in Above Snakes, with a good setup, an interesting world, and the basic mechanics playing off the typical survival tropes, including building your base, hunting for food, and keeping warm when it gets cold.

But the main dynamic Above Snakes has over the competition, is allowing players the ability to create the world around them. The game world is tile-based, with each segment of the world represented by a tile. These tiles alter with different objects in the environment, various terrains, points of interest, and even hold story objectives too.

What you start off with is a very simple landscape, with grass, trees, rocks, and common plant life. As you explore, cut down trees, and harvest fibers, and other items from the surrounding area, you fill up an experience meter. Each time this meter is full, you can reveal a new segment of the world, by selecting a tile and placing it on the map. As you continue to explore, and complete small tasks, the more the world expands.

As you expand the world, new main objectives will come into play. You will be tasked with carrying out actions that pretty much all survival games revolve around. You’ll need to craft tools and weapons, cut down trees, mine rocks and hunt for food. Then, of course, build a shelter with the resources you’ve gathered, cook meals to satisfy your hunger, look for water sources, and so forth. With your progression, new tiles will become ready to use, containing rivers allowing you to drink fresh water and fish, denser wildernesses where you can find animals and items such as beeswax, and harsher/hotter environments that have more exotic plant life, allowing you to craft more items that benefit your exploration massively.

This sense of freedom does indeed make Above Snakes very interesting the deeper you progress into the campaign. Building the world around you means having to tactically think about what to place, where, and why. You could indeed build a river allowing you to fish and drink fresh water but hinder the ease of making it to the other side of said river. You can create a massive dense forest where you can hunt and gather rarer ingredients for meals but come across more dangerous foes. There are plenty of risk and reward factors in play and building this expanded world will mean more travel time and setting up various camps to shelter yourself away from the cold nights.

There was something truly engaging with building my own world, factoring in the placement of rivers, resources, and potential dangers to gain those rewards and resources I so sorely needed often. And as the game story progressed, so did the tiles and their levels of resources and threats offer, from bees to the undead.


Snakes, Zombies, and the horror of no Wi-Fi 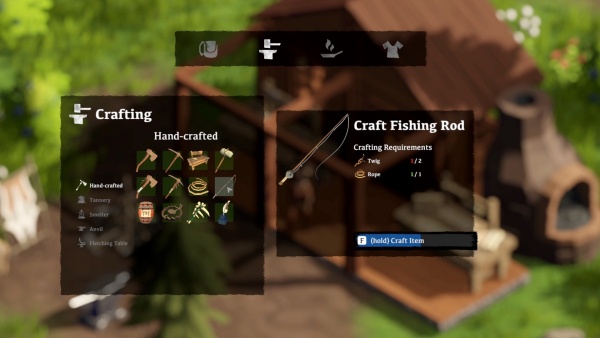 Above Snakes is a tale where the harshness of the Old West meets the brutal insanity of the dead rising from their graves to feed on the living. It’s kind of like if Dances with Wolves met Day of the Dead.

As a native of this relentless environment, you only have yourself to rely upon and the skills you develop over the world of the game. Building and exploring the world will reveal points of interest, such as a survivor camp, an abandoned wagon train, an old outpost, or the cabin belonging to a fearless lumberjack looking to help our fearless hero. With each encounter, you grasp an understanding of what has happened to the world around you and the mystery of Corpse Creek.

The story elements are also intertwined with the tile system, and players will have to physically place the events in the story within the map once they’ve been revealed. To reveal these story elements, players will have to complete a few smaller objectives, as previously mentioned with creating hand tools and upgrading the workbench. Doing these actions along with general exploration will eventually unlock new story tiles and exploring these and completing the requested action will progress things along.

The story tiles are somewhat interesting, more for the thematic elements and the general mystery at hand. The objectives are somewhat quite simple, where you will either defend or scavenge the area until you are cleared to go back to the mission giver. Hopefully, these events will escalate in intensity and depth in the full game, with boss battles, hoard-like raids with the undead, and so forth.

The preview gave a limited insight into the story, but the revelations leading up to the end point of the preview gave me some glimpse into a horrifying and somewhat Cosmos horror that would await us in the full game.


Make the world your own … and survive it!

Among the dead and selectable tiles, Above Snakes has all the tropes and drippings of a good old survival game.

You’ll be making tools to cut down trees, fishing rods to fish, weapons to defend yourself, and building a new home (or several) with all the comforts, including a well, smelter, defensive fences, and a comfy bed for when you’re done killing off the undead. It’s all quite familiar, but what I liked most was the elegant pacing, with objectives being pushed through at an organic rate, never feeling overwhelming or disjointed. The world building is a vastly completing concept and works beautifully well with the survival mechanics. But grasping the nature of the world, each tile, and what you need to deal with your hunger, thirst, and restfulness is very easy due to the beautiful presentation and clear visualisation of important items.

Players will be notified of objectives and be presented with clear trackers on what they should be doing and gently guide you throughout the world and its many interwoven actions. There were some slight problems when using a controller to move across the map and place certain objects in the world (such as the smelter for some reason). But hopefully, these small issues could be resolved in the next build or so, giving full controller support.

I also felt that the menus and inventories were a little finicky to access, and the easy access bar didn’t update well when replacing items. This again could be due to some of the controller difficulties, but hopefully accessing the multiple menus will be made a little easier, especially as more items and crafting materials will be added to the full game. 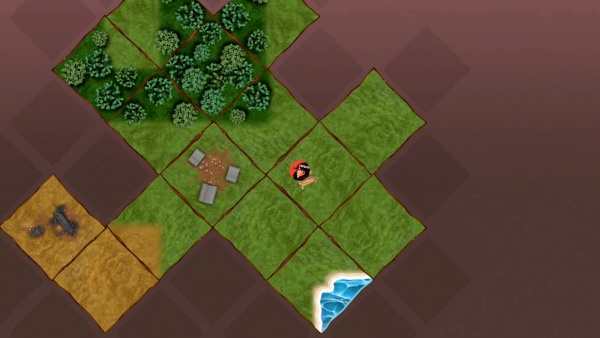 My time with Above Snakes’ ever-growing world that evolved through my own choices was utterly riveting. The freedom to make the world your own will help set it apart from the many other survival games on the market. But I hope there will be more to see in later builds. I have a feeling that weather might be an issue to implement, as the only effect occurring was at night-time when the temperature would drop drastically. There was no rain, snow, or even a change from a sunny day to a cloudy day (from what I saw in my couple of hours playing the game). I can understand this might be somewhat a problem, due to the ever-growing number of tiles that come into play, all with different terrains. But some rain, a thunderstorm, or even a little bit of snow would help make the world feel more organic.

But the tile system really does outshine here, and it’s one of the main things I’m quite excited to see how it develops with new builds of Above Snakes.

I’m not the biggest lover of survival games, but something about Above Snakes lured me in and kept me thoroughly engaged throughout the preview. The presentation, thematic elements, and world-building through player choice really have set up a very promising start for this survival game. While I noticed some missing aspects, such as dynamic weather and clearer in-game menus, Above Snakes holds a lot of promise, and with each new update, I’ll be looking forward to seeing the new additions, changes, and improvements to come. Above Snakes could well be the next big thing in the survival genre if the developers continue the good work!