What is Forgive Me Father? 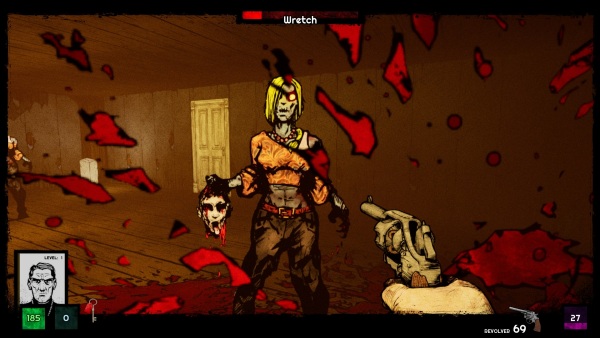 Forgive Me Father is a darkly retro throwback to early/mid 90’s shooters. With 2D visuals that represent a bleak 1930’s newspaper comic, along with dark themes, cosmetic horror, and plenty of gore and action to feast into.

Inspired by the likes of DOOM and BLOOD, Forgive Me Father takes players on a cosmetic horror journey where they will have to battle the forces of the unknown, including possessed humans, giant monsters with grabby tentacles, and all manner of twisted horror, it’ll leave your nightmares screaming for help.

Taking place in the 1930s, you take on the role of either a lonely drunken priest or a fiery reporter (for this preview, the choice was limited to the priest) who find themselves in an epidemic of biblical proportions. The dead have risen, and strange creatures ranging from the physical to otherworldly spirits have brought about the end of days. It's up to players to blast their way through the hordes of necromantic beasts and ghouls in order to discover the cause of the horrors that plague the Earth.

The mystery at hand is sure to deliver a nice mixture of cosmetic, gothic, and Lovecraftian horror, all within a neat DOOM-inspired 2D shooter, with comic book visuals. What a treat! 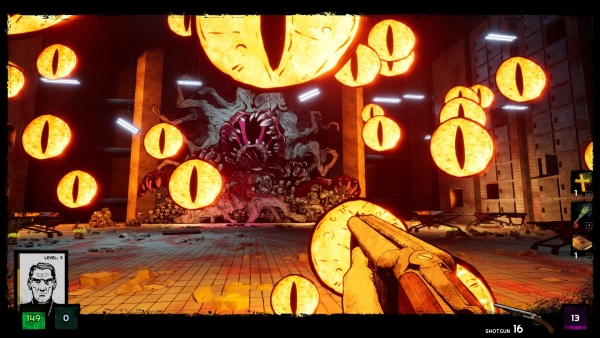 There’s not much to really tell in regard to an actual story, but as you may gather, it appears to be the end of days, as the dead walk, and otherworldly creatures have begun to consume the Earth. It’s up to you to fight your way through, level by level, taking you through city streets, dockyards, underground caverns, secret temples, marshlands, and much more, to solve the mystery.

Forgive Me Father takes the classic Resident Evil approach to storytelling and puts most of the information into scattered notes, diary entries, and newspapers to give a bigger impression of the story. These side bits are optional and very clearly labeled if you fancy learning more about what is happening. Every bit of lore is presented beautifully, with much of it giving massive depth to the horrifying situation at hand.

Aside from these notes, there’s very little else to deliver key story beats or threads. You move from one location to another and deal as much death as possible. But from what I gathered, there are some sinister doings going on, potentially involving crime families and the dark arts. Whether we’ll get cutscenes, or more character dynamics from the main cast is unknown for now.

Forgive Me Father is a genuinely, visually striking game and one that really sets itself from the rest. While other throwback games do look good and match the style of the eta, Forgive Me Father pushes for something a little different and comes off better for it.

The inky, comic book style, with heavy lines and bright colours makes the world stand out immensely. The environments are beautifully detailed, creative, and pleasing to feast your eyes on.

Creature designs are also pretty damn good, with even the basic zombies looking absolutely sickening. Their decaying flesh, gloomy eyes, and broken limbs are all wonderfully drawn. But other creatures stand out as well, looking wholeheartedly God-forsaken and otherworldly.

The only gripes I have are some odd animations, such as doors disappearing when you open them and some enemies looking a little basic with animations. I do feel the lack of animation or limited frames helps with the otherworldly and creepy vibe when moving. But when it comes to registering attacks, some enemies have a very quick windup and give little reaction time. So, hopefully, there is a balance there somewhere. 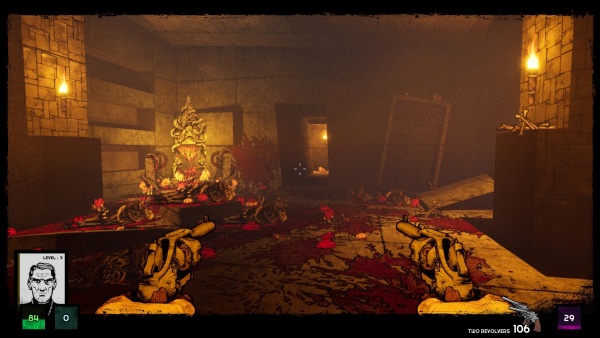 Forgive Me Father is a straight-up “Boomer Shooter” through and through. Following in the footsteps of Duke Nukem and DOOM, while being mechanically solid and a lot of fun to play. It has a few neat tricks up its selves to broaden its appeal.

You have a typical lineup of weapons, ranging from a pistol, knife, Tommy Gun, Double Barrel shotgun, and a few more which will put holes in anything that comes in your path. Where Forgive Me Father puts an interesting spin into things with weapons, is through its upgrade system. The upgrade tree is varied and allows a lot of room for creativity in making some impressive devastating builds depending on your choice of weapon attachments and special attacks.

You get upgrade points by simply blowing enemies into bits and completing levels. It would be nice if there were side missions you could complete as well for more upgrade points, but maybe this will be something potentially added in later.

You gather upgrade points over the course of the game and will be allowed to modify your weapons, as well as yourself. This includes more health, being generally quicker on your feet, or completely changing certain behaviours of your weapons. You can alter your guns in significant ways, such as adding a grenade launcher to your machine gun, being able to dual-wield your pistols, turning your knife into throwing knives, or adding cosmetic elements that do unspeakable damage!

There’s a lot of room for creativity here, with weapons being drastically altered to be more deadly and aid in certain areas of combat, whether you need help with crowd control, or dealing massive damage to a heavy enemy. So players can certainly alter their playstyle, to be faster, deal more damage or conquer otherworldly powers at a cost.

Mission to mission revolves around you finding keys, unlocking new areas of the level to find more keys, and eventually finding an exit out of the hellhole you’re trapped in. It's pure Boomer Shooter/DOOM fluff as objectives go and something that people will love or hate. Personally, I wish there was more variety in objectives for these throwback-style games, and to introduce more modern elements, regarding mission objectives.

While the main objectives never really stood out, as they’re usually a key hunt, I did enjoy some of the creative and manic set-pieces the game threw at me occasionally. From ambushes, to chase sequences, to some big-bad boss fight, Forgive Me Father knew to throw a curveball occasionally to keep things from feeling repetitive. Although the main objectives could be a little more interesting.

There are also abilities as well to help you out, from dealing more damage to gathering a bit of health when you need it. This is all linked to “Madness” a mechanic where the more enemies you kill, the more energy you gather is used to execute various abilities throughout each level.


What Forgive Me Father does really well? 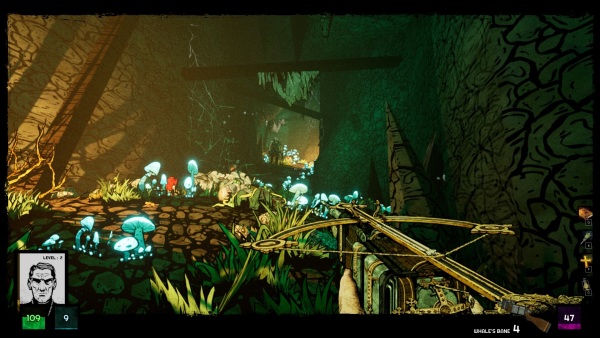 What I admire about Forgive Me Father is the visuals and variety, the two most important V’s in gaming and art. The inky comic book style and cosmetic horror themes are a match made in Heaven. It looks great, has that creepy vibe you expect from this type of horror story, and you can really tell the artists went all out for this game. The enemy variation and dynamic changes when fighting them was cool, aiming at certain parts of the body to see another form always kept the battles interesting. Adding a layer of strategy and care, making sure you don’t just aimlessly fire, and having to think about where your shots landed or to recover if you make a mistake.

Madness is a neat mechanic, and again adds a compelling layer of tension to each encounter, as it can be a Godsend when needed. Apparently, carrying too much madness influences you in the long run, altering certain sounds and visual elements, but I personally didn’t see any signs of a negative outcome. I would like to see this be more apparent in the final release, as it sounds like a cool idea and would push you to use the abilities more often, only to strive off madness.

Gunplay is simple, yet solid. Each gun feels weighty, has a purpose in every fight, and makes plenty of mess when fired. But the amount of customisation on hand which can drastically alter your weapons is a frigging great idea! I loved what changes I could make in this preview build, and the mechanic/skill tree will add plenty of replay value overall.


What Forgive Me Father could do better 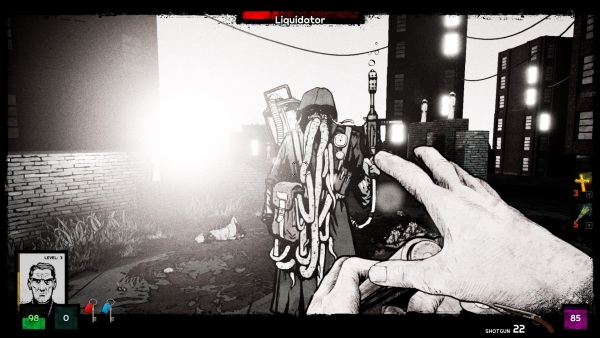 There were small problems, but quite a few to speak of. Firstly, the balancing feels a little off, as enemy damage can be ridiculous at times. Especially when certain enemies, such as zombies, rush you and block your path, it’s game over.

I found this more so infuriating when the game decides to throw a random ambush at you, after dropping into an area with a dozen or so zombies and little room to breathe. Yeah, I know certain abilities will help me in situations like this, but as the game has a manual save system, if you die in one of these randomly annoying moments, you could be backtracking for 10 or 15 minutes potentially.

I found some levels to be quite vacant and vast, just making it easy to become lost and for the venture to become a little dull. These levels, mainly the graveyard sections were the biggest problem for this and overall weren’t that much fun. I loved the tight, claustrophobic nature of the city and temple areas, as the gunplay worked well here. Plus, you had to keep moving for all the right reasons. In the bigger, outdoor levels, you were moving and most of the time nothing would happen. If there was a super-giant, heavy enemy or two you had to fight, I would understand. But some levels are big just for the sake of it?

The key hunting does become a little boring and the secrets aren’t that interesting to be fair. This is where optional objectives could be implemented to add another layer into each mission, or simply have cooler secrets. I found there were only a handful of cool secrets in the preview overall, but maybe this will change later in the final product.

I do really like Forgive Me Father and can easily see this being an excellent throwback to the retro 90’s shooter. But there are some things that need improving, small things, but things which do really matter. But what is good in this game, works tremendously well. The art style, gunplay, customisation, enemy variety, and cosmetic themes are all really fantastic and will surely make Forgive Me Father one of the most interesting throwback shooters of 2022.


A Steam preview code was provided by the publisher for the purpose of this preview.