Graven is another old-school-inspired shooter, this time taking notes from games such as Hexen to create a dark fantasy that rife with plague, monsters, and old-timey graphics. A “Boomer Shooter” in the same vein as Wrath, but one that could go further than its 3D Realms counterpart.

What the Hell is Graven? 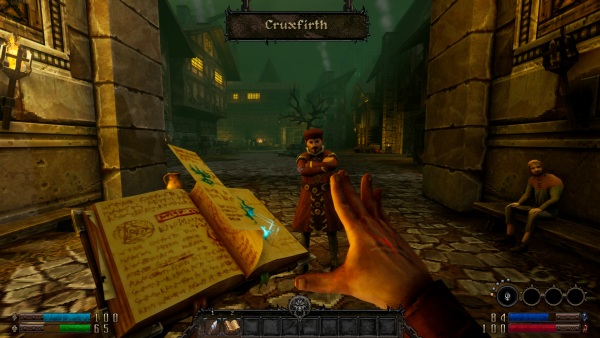 Graven is a bleak and darkly gothic first-person adventure game that sees players take on the role of a humble priest of the Orthogonal order. One who has done nothing wrong and kept his faith through thick and thin. But after the Orthogonal order commits a devastating act upon a loved one, they find the priest too much trouble and sentence him a fate worse than death. Soon, our benevolent priest finds himself exiled to a strange and decaying swampland where plague is rife, and he stands little chance of surviving more than a few days. Upon arriving in the town that sits on top of the endless pits of green slime and oozing water, our priest learns that evil is afoot and there are those who seek to destroy the land and people, potentially extending their reach much further to massive populations.

It is up to our priest to help the town and its people and destroy the source of the evil before things get out of hand. Our nameless Priest will be able to cast magic, learning new spells as he ventures through the putrid lands before him, becoming even deadlier with each spell that casts fire, electricity, and decay. But also, he can equip melee weapons and even projectile-based weapons such as a trusty bow that attaches to his arm. Giving him a varied range of attacking prowess and defence options. In the town itself, will be chances to upgrade gear, find extra supplies and with each mission completed, the town will expand, offering new ventures and perks.

What is great about Graven? 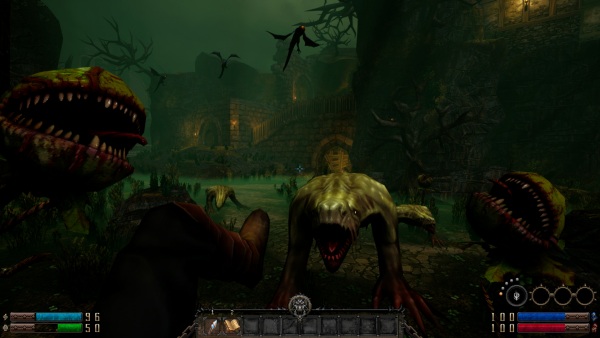 Right from the get-go, you can see that Graven is incredibly atmospheric, with its use of shadows, various shades of Sickly green being used to make the environment beautifully disgusting, and its repressive layout and world design helps create a tense and claustrophobic venture.

The great intro, which sees the main lead be taken to the town of Graven via boat (a little reminiscent of the Half-Life intro which magnificently builds the world), sets up the world’s woes, enemies, and hints at things to come beautifully well. The repressive tone and elements of the horror help bring Graven as one of the most impressive looking, sounding, and intense of the new era of “Boomer Shooters” to date.

What also stood out were the massive quests that allow for quite a bit of creative freedom in how to tackle the main objectives. The first quest, like most RPG or fantasy games, was to venture into the sewers and help relieve blockages. Venturing down into the sewers I was impressed with the level design that took me through multiple paths to find these blockages and items to help remove them. The blockages were heaps of decaying corpses and the solution, barrels of explosives.

I am usually a sucker for things like this, where you have free reign to do as you, please with explosives and for a mission that’s in most games, the developers knew how to spice things up. After dislodging the corpses in the most explosive manner possible, I ventured back up and got another mission objective to bring back the light in a lighthouse. A fairly long mission with different arenas, sub-objectives, and new weapons to find, I did quite like the level of detail and again multiple paths that could be taken. 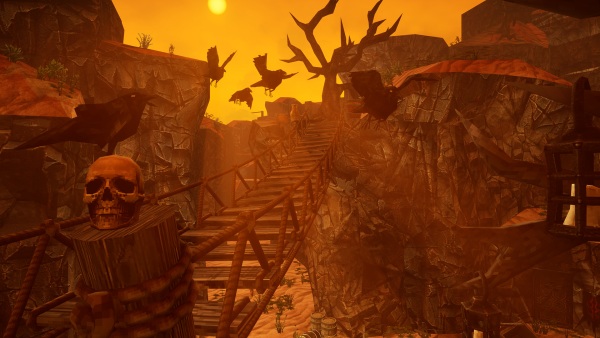 But there's also the freedom to go and explore as many places as you can reach whenever in the game. I took a fair amount of time just to venture through people's houses and pick up random loot I felt I would need or just simply wanted to take. I hope more interaction and exploration like this are added and maybe expanded upon again. Such as breaking ... I mean, going into a house to find some goodies, but come across a swarm of plague-infested goons. Like in the Dishonored games.

For 45 minutes I ventured around disgusting swamps, disserted townhouses while taking out plague-ridden undead, massive beasts, and annoying bats. But in between the venturing and killing, I was compelled by the amazing sense of discovery as I plucked plenty of secrets, new gear, and precious loot from the environment.

Now Graven is an odd game in terms of difficulty (I will explain a little more in the … not so goo section), as enemies can straight up murder you in a few blows if you’re not careful. But the game offers an immense number of resources at every turn and plenty of environmental elements to help give you an upper hand. Remember those explosive barrels? They are everywhere and I had a hoot of a time just picking these things up, building traps, luring enemies into them, and just blasting the crap out of anyone until they were bloody chunks!

That’s what was great! Now, for the not-so-great stuff…

What’s not so great? 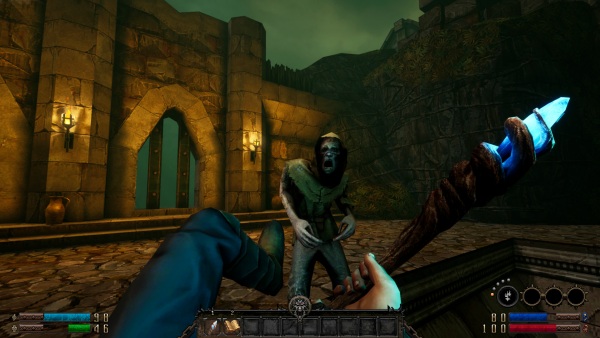 The combat … the combat is so off that I just got fed up at times and ended up just running rather than engaging enemies.

Now I mentioned the enemies were pretty powerful and, in some moments, could get the better of you. Oddly enough there are health potions everywhere, so while at times things were tense, I never thought the enemies to be absolutely dread-inducing. As there would be two dozen health potions littered about. It’s a weird design choice and it would be better to have fewer potions but have enemies, especially the low-level ones, do less damage.

The other big problem is the spells, which are completely underwhelming and offer little fun when using them against enemies or in the environment. You can use fire to ignite barrels full of explosives and electricity to electricity the water. While explosives will work … most times, using a great combo like electricity and water is just a waste of mana. Even setting enemies on fire for a good 20 seconds does nothing!

Melee combat fairs a little better, as you can kick and in some places kick enemies into certain deadly objects (a great mechanic taken from Dark Messiah but not a well-executed here) but without a counter or decent blocking mechanic, you end up just strafing around enemies and taking pot shots when possible. And this is more annoying with multiple enemies. Thankfully, the bow is especially useful and does help with the tougher enemies. Hopefully, there are more projectile-based weapons or environmental elements that could help you in a tight spot.

I did notice the saving system is rather odd. As in, when you hit a checkpoint in the game, the game saves the progress of a mission but does not have that checkpoint as a respawn point if you quit the game. Other times, my progression did not save at all. I feel this is again another odd design choice that is causing issues (and many people on Steam feel the same), which needs addressing by the developers.

While I love the visuals, atmosphere, immense mission designs, and creative freedom at times, I feel the developers need to sort out combat in some areas. They have a great foundation for dynamic combat (like Bio-Shock, using your arsenal with the environment) and could easily expand upon it for a greater impact. But first, the balancing needs tweaking and making sure elements such as spells and combine them with the environment, is a fun affair, deals actual damage, and are not just frustrating. Maybe in the later game, you’ll grow in strength, but these first few hours really have put me off from using spells altogether. And the saving feature also needs to be looked at.

But overall, Graven has a lot of Promise and feels masterfully crafted in many ways, but a little inexperienced in others. Still worth checking out and keeping an eye on for now.