Fahrenheit was Quantic Dream's second major release after 1999's Nomad Soul. David Cage is an interesting figure in the gaming industry. A creator who similar to Hideo Kojima is a passionate storyteller, but his dynamic compared to Metal Gear Solid's creator, is the allowance of choice and the ability to shape the narrative how the player sees fit. There are plenty of small choices in his games, such as Detriot: Become Human and Heavy Rain, that allows players to shift the balance of the story into different paths and mold the plot and conclusion as they see fit. Fahrenheit was one of the first to really get this trend going and back in 2005, this a massive deal in gaming. Since then, Quantic Dreams have only expanded upon their formula and created some remarkable stories and gaming experiences.

That's why it's so great to see Fahrenheit make a return (or Indie Prophecy as it was known in the US) and allow old and new gamers to experience where interactive narratives really began. This article is simply to highlight the good of the game from my own memory and also reflect what has been done better with later games from Quantic Dreams. 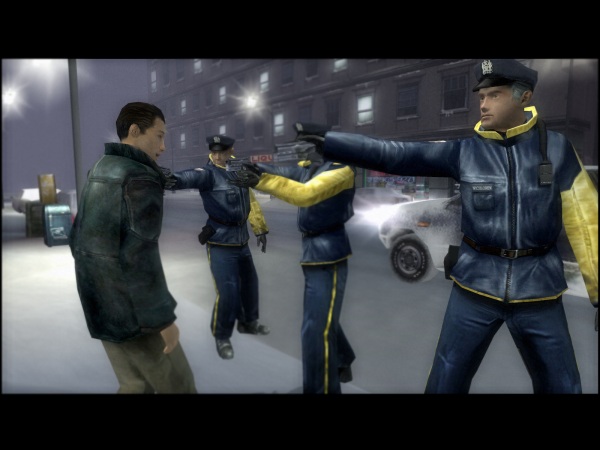 I remember playing the Fahrenheit demo back in mid-2005, a couple of months before the game was released. The setting was a dinner in the middle of New York during a harsh winter. We are taken to the restroom of said dinner to witness our protagonist, Lucas Kane, stab an innocent man to death. It's brutal, tragic, and unnerving to see our protagonist commit this act right off the bat. Lucas has no recollection of stabbing the man and feels he was not in control while the horrifying event occurred. However, there is literal blood on his hands and he must act quickly.

From the get-go, you are given a few options and all have risks and rewards depending on your timing and quick thinking. Do you A) Clean up the crime scene and conceal your crime for a period of time, allowing you to escape without suspicion? While running the risk of someone seeing you? or do you B) Make a fast exit and risk people seeing you leave the scene of the crime in a hurry? Within each of these choices are even smaller paths to take. Do you leave through the front of the dinner and risk being seen by a police officer? Or do you leave via the back and gain the attention of other diners (potential witnesses)? It's all very tense, with plenty of unknown factors and choices which could lead to devastating events.

The dinner itself is very controlled and no matter what you do, there are consequences and Lucas soon becomes a suspect. But as the game progresses, the choices become more important, and even small ones, lead to big outcomes. Now Fahrenheit is not as the same complexity as Heavy Rain and what happens at the end does feel isolated from the choices made throughout the game. But Fahrenheit does a great job at posing some really tough decisions and making you work for the answers you desperately need. Whether it's interrogating a witness at the dinner or deciding whether you save a drowning child, fearing you could be caught by police officers passing by. There are some intense and thrilling moments that require quick thinking and possibly a heart made of ice.

But with a previous point made before, the ending and some critical points in the game aren't truly affected by the choices made and instead, affect your status/mental health and whether you are caught or not. But what we got for 2005, was pretty special and remarkable none the less. 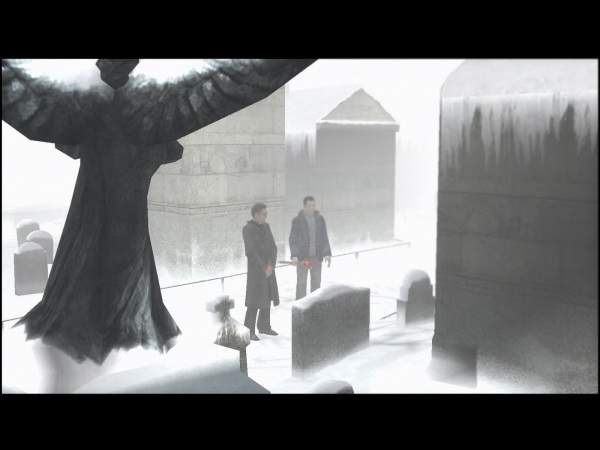 While Fahrenheit did boost a compelling degree of choice, the game itself had a pretty confident narrative. It was at this stage, late in the 6th generation console era, where game developers were infusing more resources and talent into narratives and games such as Fahrenheit, Jade Empire, Shadow of the Colossus and Killer7 were pushing what games could achieve with their narratives. Fahrenheit was a game about shady organisation lurking in the shadows, Occults, supernatural powers and the end of Days. It was also about the enternal war for the most vital resource in the world, knowledge. We had some games that did dip their toes into this subject, games like Urban Chaos. But Fahrenheit, lead by David Cage, managed to make it feel more structured, meaningful and have great pacing overall. The characters were fleshed out, with interesting personalities and dynamics which worked well within the confines of the plot. But the world itself was pretty interesting too.

I will say I do remember the ending (recurring theme here) being pretty underwhelming. I won't go into why but I do recall the ending feeling very flat and not as developed as the rest of the game. There were also a couple of plot points that never amount to anything and feel like filler as the major plot points needed some bridging. However, the story was pretty solid and David Cage did a good job at writing a compelling narrative, worthy of its status among the "High-end narrative" group mentioned previously. 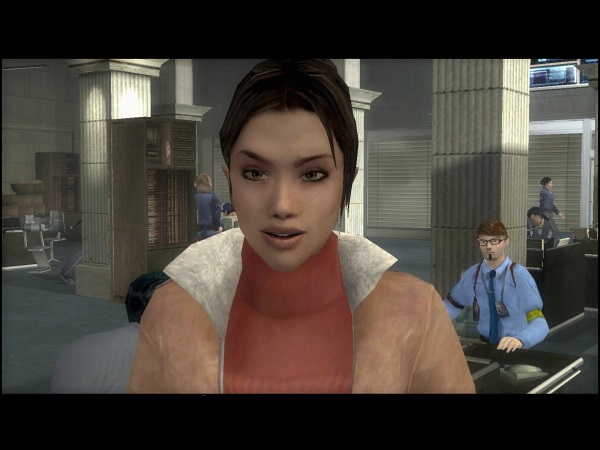 Now Quantic Dream has their signature gameplay style, working in conjunction with its interactive storytelling formula. If you've played any of their other games, you'll see patterns with gameplay elements, normally involving slow-burning yet gripping investigations, immense exploration and clue gathering, multiple-choice events, and of course big and frantic set pieces that could mean the difference between life and death.

Fahrenheit has all of these, with big set pieces, chase sequences, smaller mini-game like moments, investigation, interrogation and so much more. For a game that was so story-driven, it didn't dilute or cut out compelling gameplay. Games like Still Life had a great story but lacked any meaningful or interesting gameplay mechanics. Fahrenheit delivers on all fronts.

While Quick Time Events are considered tedious and uninventive now, you must remember that Fahrenheit was one of the first games to implement this feature, along with RE4. Even so, the set pieces, chases and moment of deduction which require it, were highly inventive and flexed the lateral side of the brain and reflexes of the player with enough challenge and little hand-holding. 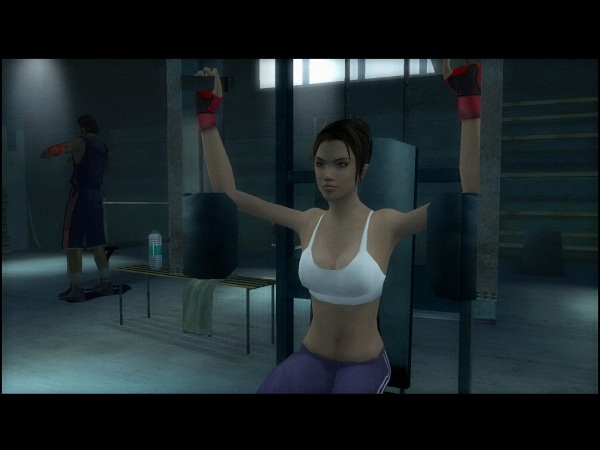 Okay. So sex is natural. Nothing wrong with that. People like sex. That's great. You know what isn't so great? Sex in video games.

No matter the game, even The Last of Us 2, sex in gaming is just a bit weird. I feel it can be done right and games like The Witcher do it right to a degree. They're often very lighthearted, silly but also full-on. Quantic Dream's games do indeed have some nudey scenes and they differ depending on the context. Fahrenheit for what I remember did them okay but for the time, it was actually a bold step to do these types of scenes. I believe there are three scenes altogether and one of them is a sort of light mini-game? But they all have context whether it's a lighthearted scene of a detective with his wife, Lucas meeting up and reigniting the passion with an ex-girlfriend, or the final intimate moments before the climax (no... the ending ... not that ... oh Jesus). I think for the graphics of the time, they might look a little dated, but for 2005, I have to hand it to Quantic Dreams for having steel nerves to include these moments. And thankfully, they have more substance and taste than Hot Coffee in GTA San Andreas.

I recall Fahrenheit being quite the experience and even a sort of game-changer at the time. While it didn't influence much of the industry as say Resident Evil 4 did, it set out to show gaming and story-telling could beautifully go hand in hand. It's a rather engrossing, compelling, and entertaining experience that really brought forward some staples of mature storytelling in gaming, as did the likes of Killer7. It should be remembered and admired for kickstarting the genre and being one of the best. It's amazing to see it released once again and I look forward to playing it and seeing if my memories of it, match the gamechanger from 2005.

Fahrenheit: 15th Anniversary Edition will include a specially created case and sleeve, a sticker set, high quality printed artbook and a thank-you letter written by the team at Quantic Dream. This boxed edition will retail for £24.99 / €29.99 and is available to pre-order in specialist gaming stores now.