I’m a bit disappointed with gaming nowadays. It’s not very often; well it’s hardly at all we get a game that’s dripping with gothic horror and atmosphere. The Thief reboot back in 2014 bombed incredibly hard, we had the masterpiece which is Bloodborne back in 2015 and the next installment to Resident Evil is looking like a gothic nightmare treat. But aside from those titles, there’s very little for weirdos like me to enjoy. That is until now! 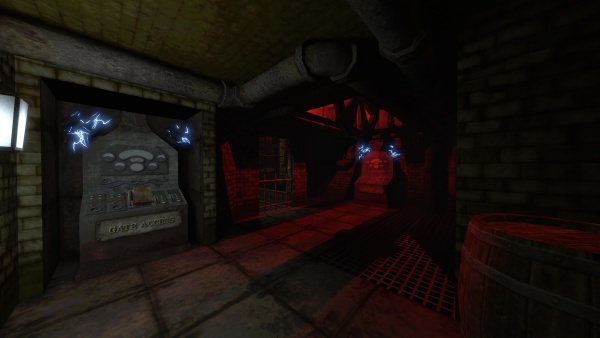 Gloomwood is a First-Person adventure game that infuses elements of horror, stealth gameplay, puzzle-solving and brutal combat. Set within the bleak and rundown city of Gloomwood, you play as a mysterious individual who finds themselves deep within the city, looking to escape and for good reason. It seems like the city is filled with monsters and murderous authority figures looking for blood. So that would be a valid reason to leave in a hurry.

As for the story, that’s really about it. While the world is very interesting, making me want to learn more about it, there’s little context on what is going. There’s no info on your character or even why their purposing the goal of escape. I won’t say this is a solid criticism as I played only the demo and there is a good sense of mystery being built up. Hopefully we’ll learn more or at least get some context on the world and hints on the character we’re playing as. Through interesting documentations and maybe even chatter between some NPCs. There are some notes, but they’re very vague for now.

Gloomwood is about sneaking around, collecting items and solving puzzles in order to progress. You have the basics from moving slowly and crouching to avoid detection, as moving too quickly can give away your position. There’s also the inclusion of surfaces that make different levels of noise which can also be a problem. I do love stealth games which implement noise as an obstacle and it’s hardly done nowadays. You can also throw small objects to make noise which is handy to lure enemies away from a point of interest or simply to distract them for a few seconds. 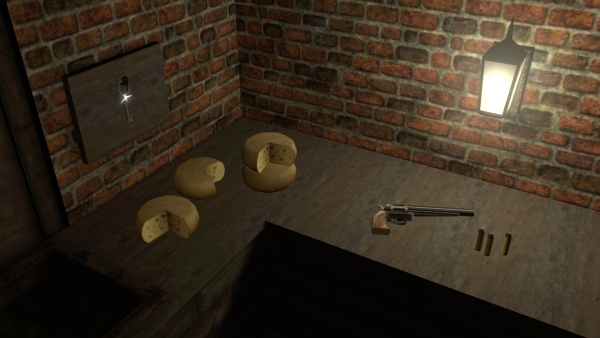 Light is also an important factor as darkness is your friend and vital to remaining undetected. You’ll have a meter that shows how visible you are in the current environment, as enemies will detect you in bright, well-lit areas. Enemies have a new way of telling you if you’ve been detected or if they’re actively hunting you. Their eyes will glow different colours depending on their state of awareness. Green means they’re just going about their normal business and unaware of anything wrong. Yellow means they’ve caught your presence and are keeping their peepers out for you. Red means, what else, you’ve been clearly sighted and are now being hunted.

Sound also plays an important factor in detection, as much as light affects your visibility. I do love the level in detail implemented and the use of lighting is pretty good. However I could see more being done with the lighting as much of it is static, even though it looks organic. I didn’t see a means of destroying light sources which is a downer. Meaning you’ll have to be pretty careful or use distraction as much as possible. Also it would be neat to have the enemies’ glowing eyes be more of a feedback factor to the player. So far they’re static and don’t reflect off any surfaces and this is a shame.

Games like Thief: Deadly Shadows have an immense lighting system, where the light is truly dynamic. Light sources produce organic looking illumination but also reflect off certain surfaces and act as feedback when guards are nearby, casting shadows and showing light from the torches. I’m sure more can be done with Gloomwood, but the foundation is solid and the atmosphere is really great.
Otherwise you’ll have a few weapons and items to use against your foes. These include a cane that’s useful for stabbing, a revolver that handy for fast firing and best of all, a nice shotgun to blast holes into your enemies. The cane itself useful for silent takedowns but not much use in melee combat, particularly if you’re up against two or three enemies. The revolver and shotgun are pretty good but ammo is fairly scarce for the most part. Everything feels pretty good to use and adding to the immersion, there’s no HUD, meaning to check ammo, you got to do it the old fashion way. Similar to that of Condemned: Criminal Origins. 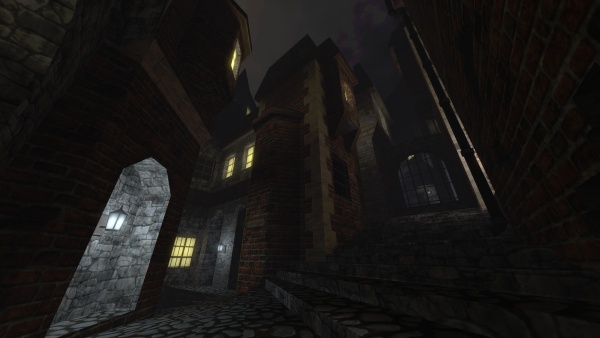 There are also some nods to Resident Evil and other survival horror titles with the puzzles seen in the demo. They’re mainly about collecting strange key items and using them to open doors and progress forward. There’s even a series of coins you can find and use on a secret door in the demo. While the puzzles are simple, they do have that survival horror charm to them. I do hope that certain weapons and tools you get later in the game require some lateral thinking to obtain. Like obtaining the shotgun in the demo was pretty easy and felt it should have required at least finding a key to reach it.

But thankfully the difficulties feel well balanced and offer an experience for those not used to this type of gameplay but curious to play it. To the harder difficulties that veterans of stealth games would greatly appreciate.

There’s a good sense of world-building and level design that encourages exploration, stealth and action gameplay. These experiences do different drastically depending on the difficulty. But primarily this is a stealth game, whether you’re on the streets of Gloomwood or in the sewers underneath it. There’s such intensity at every step regardless and the level of tension is heightened by the creepy enemies including these crow-humanoid creatures in the sewers and the fact you can only save in certain rooms with a phonograph. Again, very Resident Evil like. 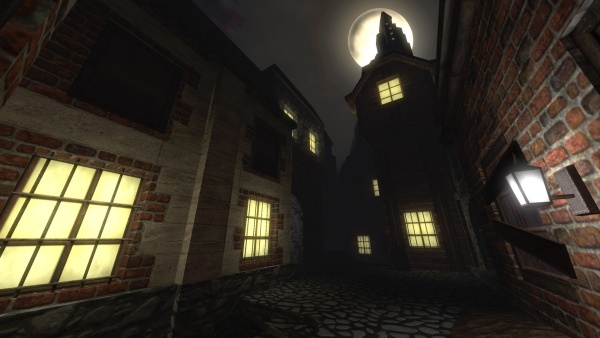 Gloomwood is shaping up to be such an intense and enriching gothic horror adventure that will please any type of gamer. But its stealth gameplay is the heart of the experience, next to the puzzle-solving and exploration. I do feel some more elements could be implemented, such as dynamic lighting and more of a story/snippets of lore to beef up the world-building.

Otherwise, Gloomwood is definitely worth keeping your peepers on!

What we liked about Gloomwood so far:

What could be better: