It’s amazing to see the indie scene in gaming thrive with many smash hits, cult classics and a range of games for everyone to enjoy. There is clearly some fields in indie gaming which are often visited such as 2D pixel art, and Metroidvania gameplay. These are beloved by many and a sure way to ensure success and attention for any indie developer’s new game … for the most part. While the market is expanding immensely, it is getting a little harder each day for new games to flourish, especially those with the previously mentioned attributes. B.I.O.T.A is a hardcore retro-inspired 2D Metroidvania, which pays homage to the 4bit era.

Does B.I.O.T.A has the chops to stand out in the ocean of indie hits? Let's see. 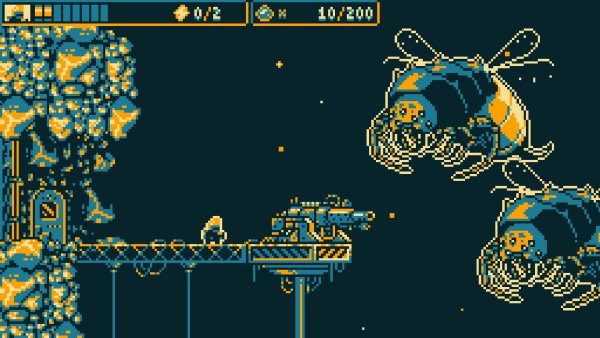 B.I.O.T.A is a 2D Sci-Fi themed Metroidvania with plenty of action, and exploration and visually resembles something from the Game Boy. Set in the 22nd century, where humanity has achieved interstellar travel due to a vital substance known as viridium. Colonies have been set up to mine the material throughout the galaxy, and corporations will do everything to protect it. So, when one of these colonies goes dark, and the rescue team sent in also goes missing, it’s up to a band of hardened merceries to save the day and deal with the threat.

You command a team of mercenaries investigating the mining colony, soon realising it’s been infected by an alien plague. It’s up to you and the team to stop the alien menace and bring order once again to the colony.

B.I.O.T.A is something which feels ripped straight from a cheesy ’80s action movie or even a classic retro game on the NES. And this is the point, it’s meant to be a resemblance of classic Game Boy games, and 80’s action movies like Aliens, yet have simple yet engaging dynamics to make it massively enjoyable for both old-school gamers and new school ones. 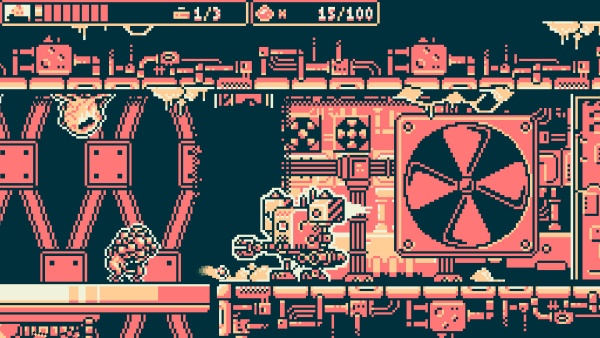 Now Pixel art has become a staple of indie gaming, as it’s cheap, cheerful and in the right hands, can look absolutely stunning! Most of the games on the market which feature pixel art graphics normally go for the 16 or 32bit, as this allows for an immense amount of detail, with examples being the beautiful looking Blasphemous and Huntdown.

But the developers of B.I.O.T.A has decided to go back a few steps and present everything in 8bit. Now, this is a rather bold move and one that could have gone horribly wrong. But it’s clear the artists were extremely confident and while overall not looking as impressive as a game like Blasphemous, B.I.O.T.A’s visual presentation manages to look and feel the part of an old 80’s game. While the bit count is very low, there is still a lot of detail on screen, creative world/monster designs and profound use of colour against the grain of the outline. Generally speaking, B.I.O.T.A is a nice-looking video game for environmental and enemy designs.

But if you never grew up with this type of era of gaming graphics, it might be a little hard to come to grips with, as some elements of the world design are difficult to decipher at first and there is a strong use of the colour black, which are times, can make some backgrounds feel like a gaping void. I know this is done to not interfere or overload the area with too much detail, but there are times when the world looks somewhat empty. I understand the original Metroid did this as well, but back in the day, this was a valid criticism by gamers and not to forget the foreground and world itself were colourful and varied. B.I.O.T.A sticks primarily with a couple of colours, and this can make things feel somewhat samey throughout. You can change the overall colour tone, from cool blues to warmer sepia notes and monochrome if you feel like it. But this does very little to give the world the depth it needs, and some of the colour choices are eye-meltingly bright and unpleasant.

The idea for the visual presentation while limited is cool and rather refreshing. The world might lack some depth or variety with its limited colour palette, I must admire the artists for making the design of the world and creatures as interesting as possible with so few bits. 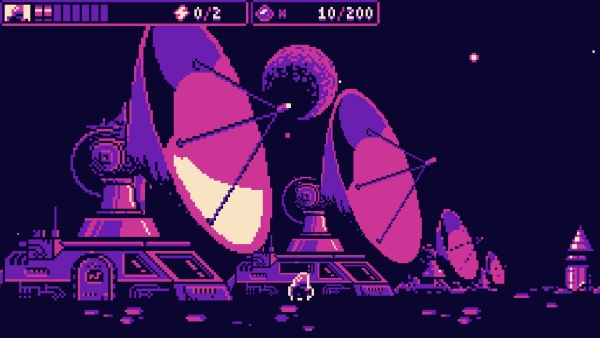 While the framework is that of a classic Metroidvania game, the main dynamic here is allowing players to switch between the different members of the Gemini II Squad. The cool thing (as you might expect with a bad-ass squad) is that each team squad member has a different weapon and special abilities. In total there are eight playable squad members, although some are locked until the end of the game (which is both good for replay value, yet annoying for general progression).

For most of the campaign, players can freely choose the available members of Gemini II Squad, allowing for different approaches to the various combat encounters and set pieces. Players will venture down via a massive lift into the mining complex, where they will have to deal with hordes of enemies and even solve a few environmentally based puzzles. You can discover viridium, which can be used in a safe place (the Gemini II base) to aid in player progression. You can also switch between members, buy resources, and recover from previous battles in the safety of the base.

As you progress through the mining complex, you’ll be able to acquire new upgrades allowing for further progression and access into more hostile areas. This is a very compelling staple for gameplay for the Metroidvania genre, and it’s executed well enough in B.I.O.T.A. The multiple members of the team mean you can change your tactics in most combat encounters, bosses, and even general exploration.

The world of B.I.O.T.A is maze-like, yet not overly complicated, meaning you’ll be doing plenty of scavenging, searching for key items and maybe finding a hidden secret or two. All of this, along with the base of operations which adds a sense of comfort in an otherwise dangerous world, combinations into a rather engaging world that’s fun to explore and fight in. The core gameplay is quite simple, yet the action is tight and highly energetic, the multiple characters give a good variety of tactics while exploring and fighting and the progression through the world is solid and keeps you invested.

The one aspect of gameplay which felt somewhat disappointing was the few vehicle sections in the campaign. The idea is cool, has the potential for awesome set pieces and is a nice way to break up the on-foot exploration, but there are a few main problems with these sections. Most of them are combat-focused and go on for way too long, becoming tedious and downright boring. There are a couple of sections, which rely less on combat, and these are fine. But the ones where you must shoot just feel very straightforward, and uninspiring. If you look at a game like The Mighty Goose, which has some epic vehicle sections, with a variety of cool transports, plenty of action and usually contained within a short but memorable timeframe. Overall, these sections aren’t bad but could have been reworked to flow better and be enjoyable.


B.I.O.T.A may not stand high on the shoulders of Castlevania: SOTN or Super Metroid, but it is still a highly enjoyable (if not short) Retro-inspired Sci-Fi adventure. The world/monster designs are great, and the mechanic for switching between team members in a Metroidvania world is compelling, possibly being expanded upon in a sequel. And generally, the gameplay loop is very entertaining. While there are some problems, B.I.O.T.A still manages to be a great time for those looking for a short and sweet retro blast from the past!

A Steam review key of B.I.O.T.A was provided by the publisher for the purpose of this review.