The House of the Dead Remake (Xbox, PC)

Back in the mid-90s, there were two games that brought back zombies into mainstream fashion for media. The first was the survival horror classic Resident Evil and the other was an insanely intense and fun thrilling railgun ride known as The House of the Dead. Back when arcades were massively popular, The House of the Dead was king and provided kids with many hours of awesome, gory fun and with no pocket money after a few rounds. It was a classic, but one that was sadly left in the 90’s as the only ports of it were rubbish and it never got the remastered/remake treatment …. Until now.

Was it worth digging up this classic arcade shooter for a new generation of gamers? Or should it have been left in the ground to decay?


What is The House of the Dead? 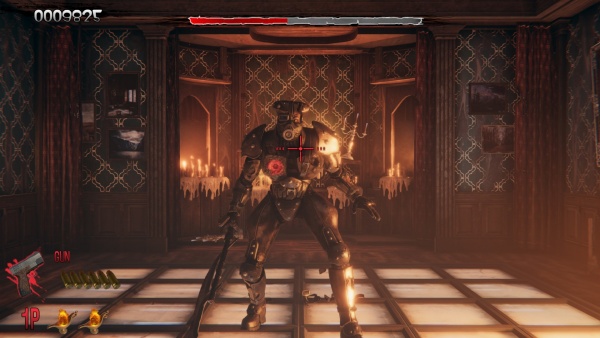 This is a complete remake of the classic 90s arcade shooter, featuring a brand-new visual presentation, new modes, and extras, but all the same thrills from its prime.

The story is incredibly simple, centered on two special agents going out to a rather sinister-looking mansion (yep, Resident Evil vibes) where the undead are roaming around and eating the flesh of the living. It’s up to our two agents to venture through the mansion, saving any survivors, fighting the hordes of undead, and taking down the man behind it all. It’s an incredibly simple setup that’s full of 90s cheese, ultraviolence, and enough gory campness that the game relishes in and you can’t help but enjoy.

There are plenty of staples of the gaming horror genre like its counterpart Resident Evil, The House of the Dead takes place in a spooky house, filled with undead abominations, there are mad scientists and big bad guys that need a few rounds to the face! 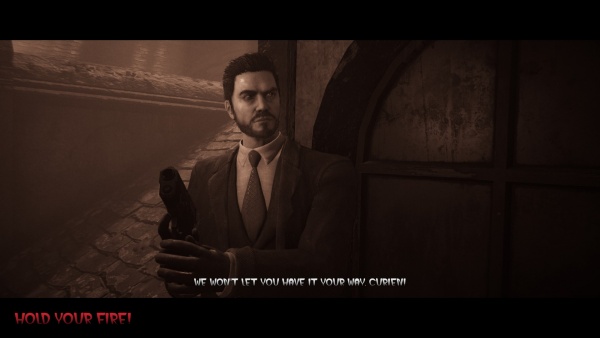 Gunplay, undead, and saving the day are the main elements for the core gameplay, with players taking on the role of either G or Thomas Rogan, special agents sent in to deal with the undead. If you’re familiar with arcade shooters, then you’ll know the basics. But for those who’ve never seen, let alone played an arcade shooter, players will be in control of aiming a gun as the character moves along a predetermined path through each level.

Moving through various environments and stopping frequently to deal with incoming enemies ranging from zombies, bigger zombies, undead monkeys, bats, giant frogs, and much, much more! When you stop, shoot everything that’s heading towards you, whether it’s a shuffling zombie looking to claw you, a vicious bat looking to take a chunk from you, or massive, armoured zombies looking to slice you in half. But as you stop to shoot, there are other events happening and points of interest to take note of. There will be human survivors in the house too, who need saving, which you do by killing the enemy about to kill them, but there are also useful items in the environment, such as tokens for scoring points and even new weapons.

This is all pretty typical arcade shooter fluff, but it’s a formula that’s solid and immensely fun. The bar for entry is so easy, that anyone and their grandparents can pick up the controller and join in. But The House of the Dead does include a few neat tricks which even to this day, make it a varied, refreshing shooter that has a lot of replayability.

What these neat dynamics entail are multiple paths throughout a majority of levels, epic bosses, and even multiple endings. All of these make for a range of unique playthroughs that differ each time you venture into the spooky house. Paths are accessed at certain points when shooting particular items. For example, if you’re in an elevator and shoot either the up or down button, the elevator will take you to a whole new area depending on your choice. There are hidden paths, weapons, and other rewards to grab.

I will admit that these can be at times a little frustrating to identify and interact with, as the game does move very fast, leaving little thinking time. You need quick flexes and keen eyesight to make the most of the hidden rewards, and this can be a little tedious if you want a particular path or a weapon but can’t manage to get it due to the fast pace and movement through certain areas.

But the game/story itself is quite short, allowing you to play through again and again, and not invest a mammoth amount of time just to take another path in the story. Plus, you get a chapter select this time round and multiple difficulties allowing a massive step in accessibility compared to the original arcade counterpart.


The variety of paths you can take throughout The House of Dead does indeed add some great layers for replayable gameplay that’s also immensely enjoyable. While it might have been cool to see new areas and new bosses, I feel the conversion to new tech is more than enough.

Visually speaking this is a cool-looking remake, with a highly stylised look and gritty grime house feel, that’s bright, colourful, gory, and hilariously camp in some places. I dig all the visual updates to the enemies, and while the gore system is not as brutal as say DOOM Eternal, it does still feature plenty of dismemberment. One of my own personal nit-picks is that the gore is pretty straightforward, and I’m generally a fan of varied and weird gore, like in the original Evil Dead. Which has lots of different colours to the blood and gore and maybe the devs could have stepped outside the box a little to make the gore a little more visually interesting. But it still does the job regardless, and I really liked the new visuals for all the main bosses, with better-looking arenas and nicely smooth animations.

If you know The House of the Dead, then you know there were always cheap shots at the players, to drain your health as quickly as possible. There are still quite a few cheap moments, which is just how these arcade games were made. But thankfully there is a difficultly selection and a generous amount of retries when you do meet your end. And if you’re able to save a scientist from an attack, they’ll reward you with extra health, which is always nice. 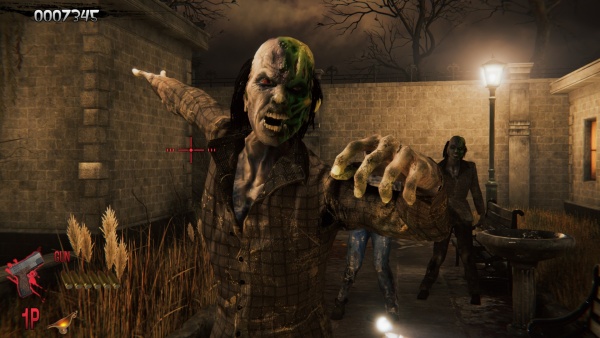 While it may be a little odd to those who’ve played this in the arcade to play this now without a light gun, the aiming and response time feel pretty spot on. I did play this remake on PC, Xbox One, and Xbox Series X with an elite controller, and all of my playthroughs felt fine. You can adjust the aiming speed to be as low or high as you like but setting for mid-low/mid-high works the best I feel. The game’s pacing, and how quick some enemies can be, means that slower aiming is great for accuracy, but can mean a quick death as well.

It's a slightly tough call as the game was intended for light guns, being the most accurate compared to using controllers in these types of games. With using a mouse is the absolute next best thing. Controllers feel fine, but you may have to work out the right aiming speed for you while considering the speed/pacing of the game.

One of the biggest negatives (while not a big problem) I had was certain aspects of the user interface, menu designs, and fonts. I was fine for quite a bit of the text, but there are many instances where button names and actions are way too overly designed. It can be quite hard to make out just some of the button names on the main menu, and the lack of some accessibility options was a little disappointing too. Plus, I did spot the odd spelling/grammar error which was a little off-putting sadly.


All those undead extras 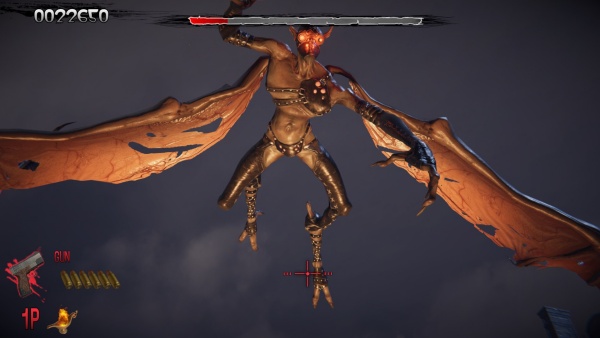 Now, this wouldn’t be a valued remake, without plenty of extra content being thrown in. The devs have done a decent job at adding in some awesome extras, including the previously mentioned difficulties and chapter selection. But there is also horde mode, which is the main campaign but with lots more undead zombies and other enemies thrown in for good measure. Highly recommended for co-op. There is a gallery where you can view all the enemies in the game and a new feature which is basically an armoury where you can equip the better weapons the game has to offer and play through the vanilla campaign or horde mode.

To unlock the armoury, is a little bit of a pain. You need to save every single scientist in the game and then go through the campaign again and find/shoot several hidden chests which give you each weapon in the armoury. It’s a neat idea, but one that can be a little tedious, as saving each scientist is not a massive feat, it’s very easy to slip up and let them die. Especially if you only have one left to save and they die.

However, there is one cool addition that can really help out with this and makes the game even more fun, that is cheat codes! Once you’ve unlocked enough achievements for each cheat code, you’ll be able to enter that code and enjoy its effect. This can be from new characters, unlimited ammo, one-shot kill mode, and God mode. This was a nice addition and really did flesh out the replay value even further. Plus it’s really nice to see a game have fun cheat codes, which we don’t tend to see anymore.


Genuinely I can say I had an absolute blast playing through this revamped classic, and anyone who loves the old days of simple and wholesome arcade shooters will surely love this. While there are a couple of missteps, I really do feel the developers did a great job with the updated visuals, respecting yet refining the core gameplay elements, adding in plenty of extra content, and just making this a solid remake that’s highly approachable and enjoyable. I would definitely recommend checking out The House of the Dead Remake when you can and let's hope the other games in the franchise get revived from the grave!

The House of the Dead 2 was my personal favourite and I would pay good money to see the wonderfully awful villain “Goldman” return.

++ Plenty of variety in level design and lots of replay value

- Some extras are a bit of a pain to unlock

- Some issues with the style of the UI and menu text

Steam and Xbox One review keys were provided by the publisher for the purpose of this review.