Star Wars revolutionised filmmaking, brought geek culture to the norm, made the Sci-Fi genre immensely popular, and officially killed the popularity of Westerns back in the old days. I can’t really specify just how important and brilliant Star Wars truly is in modern media (despite me not being a supermassive fan). Lego, again, is a simple concept for a toy that revolutionised the world and now costs more than a house. So, what happens when you bring these two together? Magic, that’s what happens.

Lego Star Wars has been about for quite some time in gaming, since about 2005, with the prequel trilogy and the original trilogy coming out shortly after. Now we have the latest trilogy all finished up and in a rather epic move, all these games are brought together in one massive package.

Should you visit a galaxy far, far once again (but with Lego)? Read on to find out.


What is Lego Star Wars?

Well, it’s Star Wars …. But with Lego. And it's pretty darn awesome!

Okay, what is the Skywalker Saga? 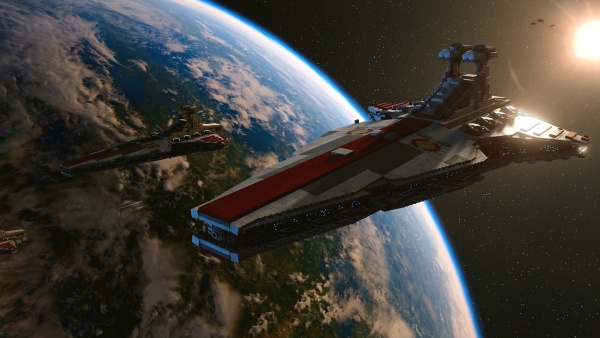 The Skywalker Saga is a magnificent gathering of all the main titles of the Lego Star Wars series, featuring all three main trilogies while adding in some neat new features, cosmetics, and characters.  Players will be able to venture through the original, prequel, and modern Star War trilogies exploring the galaxy, defeating the Empire, and building random assortments of epic Lego sets!

Play as Luke, Chewie, Ray, Finn, Anakin, Boba Fett, and even the super cool bounty hunter himself, The Mandalorian across all the major events of every main entry of the franchise. And while you might expect each game to take a few events from its respective film, with a few highlights thrown in for good measure, The Skywalker Saga says, “Hold my Jawa Juice” and presents a gargantuan adventure for all the family.

You will be playing through a majority if not the entirety of the film the game is adapted. From the attempted assassination of Qui-Gon and Obi-Wan to the epic fight at the Geonosian arena in The Clone Wars. From the daring rescue of Princess Leia to the fall of the Empire. The adorable Ewoks commencing bloody battle on invading forces, to the Rise of Rey as a Jedi and the return of …. A certain powerful enemy that kind of comes out of nowhere.

Everything that could possibly be made into gameplay is here and so much more. Lego Star Wars has always offered an enjoyable journey, with plenty of fluidity, customisation, creative freedom, and a strong mix of linear fun and open-world exploration. Switch between characters to dynamically interact with the world, solve puzzles, fight enemies, and massive boss battles. Plus, an immense sense of player progression as all characters can be upgraded and customised, expanding on the wonderful stance of imagination that comes with Lego and Star Wars argutely. 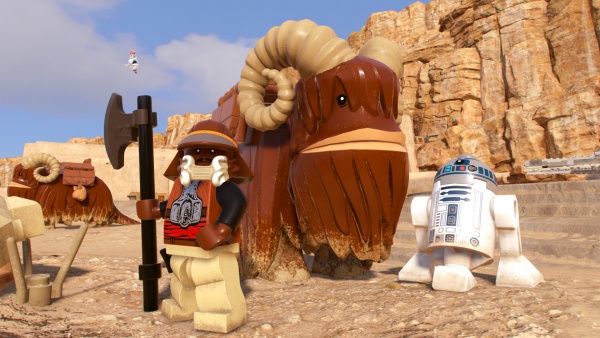 How Lego Star Wars games work is usually by breaking down all the main story beats of a film and respectfully recreating them with a neat Lego twist. You’ll be carrying out main objectives which would often just be a beat or plot point in a film, but also doing odd tasks build upon that objective and even carry out external events which might have been small, yet interesting to explore. This is how you can transform a simple moment in a film, such as Han Solo and the gang escaping the hanger in the Millennium Halcon into an intense yet fun multi-layer objective of readying the ship, preparing for launch while fighting off Strom troopers as either the character intended for that scene or swapping out with randoms from the other films.

There are also other moments that are given the same, loving treatment such as building the Pod-Racer for Anakin to race, fighting the Droid Army in a spectacular battle of erudition and set pieces, and escaping the planet Hoth by carrying out various odd jobs and exploring the harsh planet surface for Luke.

Plus, all the classic moments you can include from taking out the AT-ATs on the planet Hoth, destroying the Death Star (multiple times), fighting in the forests of Endor, and so much more. Even the more uninteresting moments of the films are given a Lego makeover and made more fun than watching them in the films. Such as that Casino scene from The Last Jedi, which made so much fun, by exploring it and gathering sweet rewards that level up your character.

There is a wonderful sense of imagination that has gone into not only expanding upon the many magical moments of these films but also making them better both for gameplay purposes and as a means for storytelling. Taking the good and the bad and giving it all the same treatment, only makes everything stronger and the bad moments (especially from the later films) are given a new lease of life, a reimagining that was so needed and boosts dynamic and fun gameplay to make them energetic, yet thoughtful and funny. 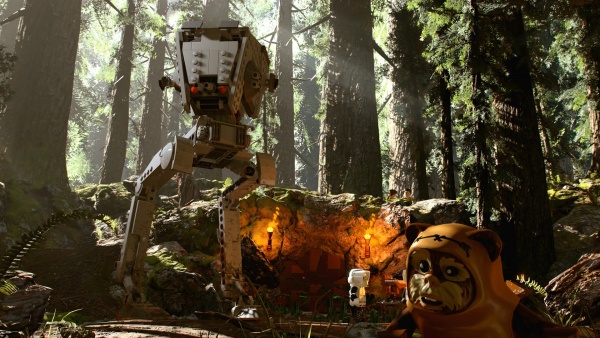 The Skywalker Saga has an ingenious approach to its gameplay structure, with various level design styles in play, neat dynamics such as character switching at any time, and lots of rewards for those to play and even more who go above and beyond. Level design switches between strong linear ventures, where you’ll be fighting, solving puzzles, and completing objectives to reach the end. To explore large open areas, where players can roam free to find secrets, look for useful upgrade tokens that will surely come in handy, or just check out the beautiful surrounding areas. Then there are the massively impressive outings into space, where again you can explore, check out the amazing sights or take part in amazing space battles.

There is a ton of variety here with gameplay and level design, and the developers have made darn sure that every beat, set piece, and obstacle is enjoyable and engaging to play. Lego games have also been brilliant in their simplicity, and with this simplicity comes an assortment of meaningful gameplay elements that most likely wouldn’t work in another game.

Exploring the world before you are purely joyous, especially to Star Wars fans, and more importantly due to how much there is to discover. I felt like with every step I took, I made a meaningful discovery and as a grown a** man, I loved it. So, I’m guessing that children when playing this in single-player or co-op will have an absolute blast venturing through some of the most famous environments in Sci-Fi history. Finding useful items, cool Easter Eggs and just playing around with the world, constructing different new objects for special purposes.

Combat is generally quite simple, but I wasn’t looking for anything intense and Souls-like for a Lego game. But where the range and excitement lie with combat is the vast number of characters and switching between them with their various attacks and skills helps make things feel more interesting than your typical child-friendly adventure game. Even something like the boss battles is genuinely thrilling and battling it out in some of the most memorable fight scenes in film ever (but with Lego), was wonderful, especially with how many gameplay tricks are embedded into these moments, upping the excitement factor.

But The Skywalker Saga just nails it in so many other areas for gameplay. From platforming through the inventive world designs, the rewarding sense of exploration, and the immense amount of content here with about 270 characters to play as, 23 different planets all with numerous districts to explore, a vast open area of space where you explore and take part in races or space battles, complete bounties, unlock new starships and so, so much more!


I couldn’t forget to mention that each character has multiple skills and skins to unlock, which even have a dynamic effect on them when equipped! There are class upgrade trees which again drastically enhance your characters/squad overall, giving them more speed, power, and special abilities unlocking more in combat encounters and expanding explorational aspects in each location.

Wow! Even to have something like the Dark Side Class tree which when upgraded allows you to Force Choke people or have enemies cower in fear or run away. Making you feel like the ultimate Sith Lord!


Good wholesome, Sci-Fi fun (which is cheaper than a Lego set) 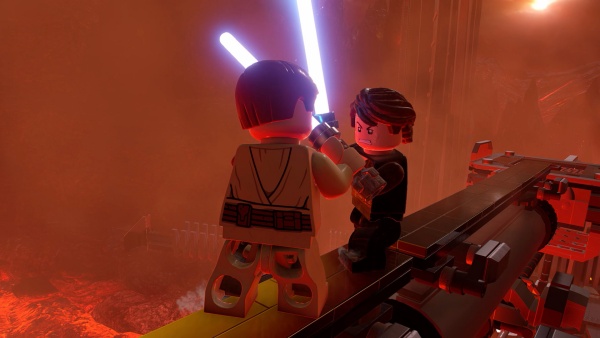 TT Games clearly have such a deep love and appreciation for any IP it has the honour of adapting, and Star Wars has clearly been it's most ambitious and joyous. I can recall playing the prequel trilogy with my older brother back many moons ago on PC and we just loved the simple yet humble nature it had. I had a few years ago reviewed Lego Star Wars: The Force Awakens and it rekindled my love for these types of games playing through the entire catalog of the film adaptions into Lego, has just kept that love in check.

The sense of humour is nice, with plenty of jabs at what each film may have done wrong (some more than others), but also respecting the source material to include those dramatic moments when needed. But also, to include a wacky spin on certain other ones. Never did any comedic scene feel tedious or cringe but they all had excellent comedic timing and great delivery.

Not to mention that visually speaking, everything looks phenomenal! I know many will just say these are just Lego games, but seeing the level of craftsmanship and attention to detail, for everything to look and sound like it did in the actual films but made with Lego takes some serious talent. I hope everyone at TT Games knows just what amazing work they have done here.

Overall, this is a kid’s game, and it won’t push you to the brink of insanity like Elden Ring, but that’s not the point really. These games are meant to invite and welcome everyone to play whether you’re a child, an adult, or a whole family. These games are so refreshingly enjoyable, easy to grasp and understand, yet have so much to do and explore that they will give you many, many hours of fun!

Sadly at the time of writing this review, there is no online multiplayer co-op, which is a real shame in some regards. But really this was made for couch co-op and to be played in a family setting. Or simply be played by some dude who loves Lego and enjoys Star Wars … like me!


Lego Star Wars: The Skywalker Saga is a nice reminder that kids' games can be meaningful, joyous, and timeless just like so many of the greats. There is everything here from engaging platforming, excellent level, and world design, awesome set pieces, an immense amount of creativity, discovery, and rewards and all wrapped up in the best Sci-Fi phenomenon ever to grace film … and plus it’s Lego, so it’s cute, colourful and bursting with ungodly amounts of creativity. What I will say in short is Lego Star Wars: The Skywalker Saga is a must-have for anyone who plays video games. It’s wholesome, enjoyable, and will make even the coldest of Sith Lords feel joy once again.


+++ Colourful, creative, and immensely fun gameplay
++ Visually wonderful with great sound design
++ Excellent platforming, exploration, and amazing set pieces taken straight from the films
+ Simply and easy to grasp, but still tons of fun for everyone of all ages


An Xbox One review copy of Lego Star Wars: The Skywalker Saga was provided by the publisher for the purpose of this review.