Do you know the phrase “To hell and back”? Well, for some, that’s more than a phrase and just an everyday activity … to do repeatedly in some cases. Supergiant Games broke the mold for the Rogue-lite genre with their award-winning 2020 title Hades, which was highly respected and highly successful among the gaming community. Noted for its compelling story, beautiful art style, and satisfying gameplay loop, Hades won the hearts of many and will surely be an inspiration to many designers in the future.

But with 2020 now a distant memory (sadly 2021 isn’t a better year), have the rose-tinted glasses worn off now, and can we see Hades in a different light?

What the heck is Hades? 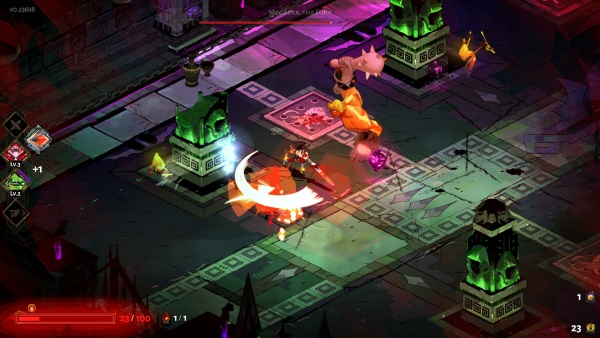 Hades is a Roguelike, dungeon crawler, where players take on the role of Zagreus, the son of the lord of the underworld. Zagreus has had enough and wants out of the underworld. But sadly, his father won’t allow him to leave. But Zagreus is determined to leave, even if it kills him. Which it certainly does.

Before long, we learn the true reason Zagerus wants to leave and why he is being kept in the underworld. But will he make it out alive?

Zagreus is the son of Hades, ruler of the underworld. Someone born into royalty yet desires a life far from what his father has become and to feels the urge to leave the accursed place for the world above. However, Hades will not allow Zagreus to simply walk out the front door and demands he remains. With an open window in his room, Zagreus decides to escape and venture his way through the underworld, in a bid to escape. However, the underworld is a harsh, punishing place that will do everything in its power and at Hades’ command to stop Zagreus.

So the general plot is that Zagreus our young hero is looking for a way out of the underworld and a means to be rid of his controlling father. However, there is a much more personal reason for his escape attempts. But I won’t spoil the big reveal here. Let’s say there is a lot of urgency and a lot of depth to Zagreus and his escape more than him being a bratty child and wishing to leave his responsibilities behind.

What Hades does well in handling its story are two factors. It’s the pacing of information and the dynamics between all the characters. Hades is full of interesting characters, all from Greek Mythology and all of whom are compelling in their own ways. What is better still is the dynamics they all have with each other.

All of the gods at trying to win Zagreus’ favour and show off they’re the best relative, by showering him with gifts and “Boons” which act as powerups and abilities. However, each of the gods can be angered as well as showing unconditional love for Zagreus. They’re also keen to show up other gods and do what it takes to be the best relative. Soon enough you’ll have your favourite relative upon Mount Olympus and making sure you do your best to keep them pleased.

But as the story is broken up through multiple runs through the underworld, important story elements are delivered through multiple conversations with numerous characters, triggering key events during your runs and building up relations not only with the gods but your close family and friends in the underworld. New relationships develop, new quests open up, new allies will appear from the shadows to help you and the truths about you, your family, and the reason things are the way they are will be revealed, bit by bit into a captivating picture.

The story is a great family drama, filled with different dynamics, twists, falls and mighty rises fit for a Greek Myth. But the way Supergiant Games has delivered it, havng broken it up into engaging bit size chunks and overall, keep you invested throughout is masterful. 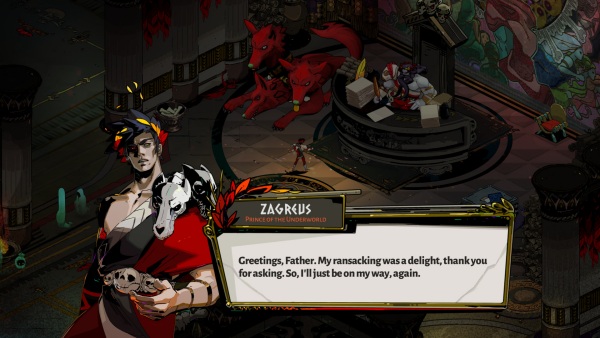 Hades is a relentless yet immensely enjoyable Roguelike that centers on trial and error and becoming Godlier with each run.

Zagreus will start his venture at home, where he can prep, talk to his family, and complete various small jobs such as buying goods and upgrading his weapons. Once players are prepped, they’ll enter the underworld. It’s from here that players must fight their way through roughly 40 “encounters” or chambers that hold various groups of enemies, traps, events, and bosses. Along the way, players will collect loot and resources which will help permanently upgrade Zagreus, making him stronger, or to buy goods back at home such as various cosmetics for home, but also items that will improve his standing with the Gods on Olympus and upgrade his brutal arsenal of weapons.

Along the way, Zagreus will be intercepted by the Gods, who will offer Boons and abilities that will be very useful during his escape. Making him stronger, faster, luckier with obtaining loot, and generally just becoming a badass. Players can return the favour by giving gifts and building up their relationship to another level. Unlocking new story threads and events that will come into play much later.

But aside from being a good nephew and cousin to the Gods, you’ll be fighting your way through hoards of enemies. Players will be able to be pick from 6 main weapons at home and fight their way out of the underworld. The base weapons are nothing special but armed with various boons and weapon upgrades, Zagreus will become a might demi-god the underworld will fear.

But aside from fighting tons of enemies, Zagreus and take part in fishing, where collecting various fishes will earn him loot back at home, take on mini-bosses, trigger special events and even meet some other folks in the underworld trying to pass the time. You’ll develop new relationships again and open new story threads that expand and grow into some great side quests.

Now beating this once is not the end of things, but rather just the start. Once you do escape, there are events that occur, and new runs must be made. New events kick in, new enemies appear, and the difficulty can be raised in a bid to get more resources to make you stronger.

What Hades offers is a satisfying gameplay loop which is seen in pretty much all Roguelikes, where you venture out, fight, collect goodies, fail and become stronger. But Hades implements so many neat dynamics and elements to make each run feel engaging and fresh.

The base combat is good but becomes amped up when you get the mixture of boons and effects, plus unlocking any weapon upgrades will really push the intensity and spectacle in all combat encounters. The Boons and their effects are great and combine them with others can really help out in the most difficult runs. Experimenting is a must and the end results to some of the combinations are fun.

Plus, you have all the story events taking place, small extras such as fishing, and the small tweaks which alter boss encounters and events really do break up the tedium. Even though there is very little tedium here. 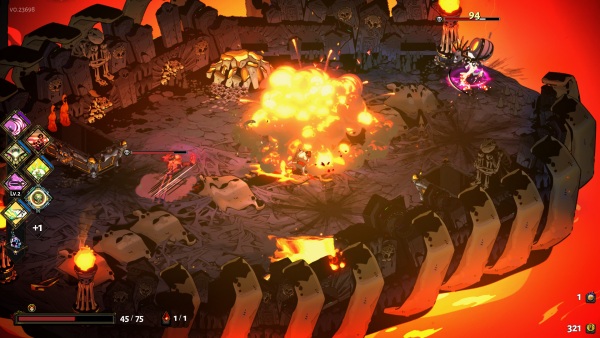 Hades is an incredibly strong Roguelike with a highly satisfying gameplay loop and story. Everything bounces off each other so well that you could lose yourself in the world of Hades and its extremely fun gameplay.

Combat can be utterly brutal yet impactful, and as the venture progresses you can indeed make a build that will wipe the floor with enemies and make yourself look good while doing it. Pretty much feeling like a God. All the small, odd jobs amount to a world that feels responsive and rewards you for your hard work. Getting paid and buying the things you need to progress does feel gratifying and more so, it feels massively important towards your growth.

The variation of tweaks and personal abilities given in every run keeps things from feeling stale, while each encounter with the Gods, family, and friends always reveals something different, adding more to the overall plot. You can even have romantic relationships with several characters, by winning them over with gifts and spending as much time as possible with them.

Hades feels like a game that has been highly refined and worked on, like a fine marble statue. From its small interactions, where Zagreus can customise his home in a fashion he sees fit. To fishing for many of the denizens of the deep in the underworld and being paid to capture them. Right up to aspects such as its highly intense and fun combat and an incredibly rich storyline. The more you play, the more that is unlocked, and the scale of Hades is truly immense.

Also, Hades looks and sounds amazing. The visual style is wonderfully bright and imaginative, the perfect style to bring the Greek Myths to life in video game form. And the soundtrack is just brilliant. A perfect rival for DOOM Eternal’s great soundtrack.

Hades is a perfect game.

But there were a couple of things that could’ve been a little better. 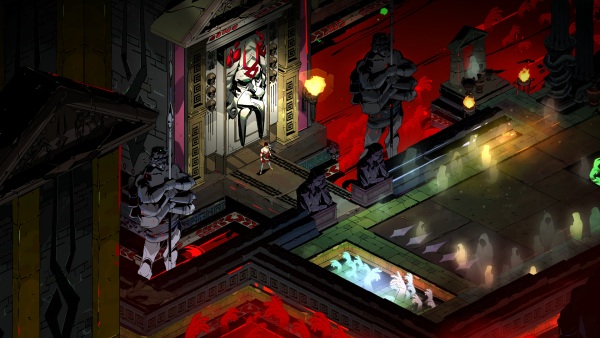 What could be better?

So as a Roguelike, you would be expected to play the venture repeatedly to reap all the rewards such as loot and story reveals. And previously mentioned there are tweaks, such as different boss variations, arenas, and encounters here and there. I do wish some of the changes were a little more frequent or maybe if Hades did a Dead Cells and allowed you to venture along different paths.

But the more you play the more that opens up in the world of Hades. For new players, it can be a little sluggish to get to a point where you can fish, venture into bonus areas, see new bosses and get better weapons. It’s a game that makes you work for the goods, but it can be a little slow to get certain resources, such as Gems to begin with. You kind of need to know or do some research to make the most of your early hours and if you play Hades wrong, you’re looking at a long haul of trial and error. And Hades does not handhold at all.

However, much of this can be overcome but simply experimenting and approaching each run in a different way. But changing your weapons, mixing up the boons, and interacting with as many characters as possible. So the pacing to obtaining resources and loot can be a little slow, but if you play Hades and work at it, you’ll get some of the most satisfying rewards in recent gaming.

But I do wish Fishing would occur more often!

Hades is a masterclass of game design and one that should be treasured. As for a Roguelike, it’s one that elevates the genre and will surely inspire many others with its captivating story-telling methods, immensely enjoyable gameplay loop, and rewarding sense of accomplishment. While it does have some troops of the genre and new players will need to adapt and learn quickly to make the most of it, Hades is still a perfect game nonetheless.

Game-News can’t recommend Hades highly enough and therefore it was one of our top games of 2020. But more importantly, one of the most important games of the last decade.

Check it out right now!

++ Satisfying combat and plenty of fun side quests

Review copies of Hades were provided by Supergiant Games for the purpose of this review.