Did you notice that Gooses are a rather popular animal nowadays? Well, if you haven’t had your fill of goosing around, time to check out The Might Goose! A side-scrolling, over-the-top action game that feels like Metal Slug but with a Goose! Want to know if it’s good (or should that be Gooosed? No, that was awful. I am sorry), then read on!

What is Mighty Goose? 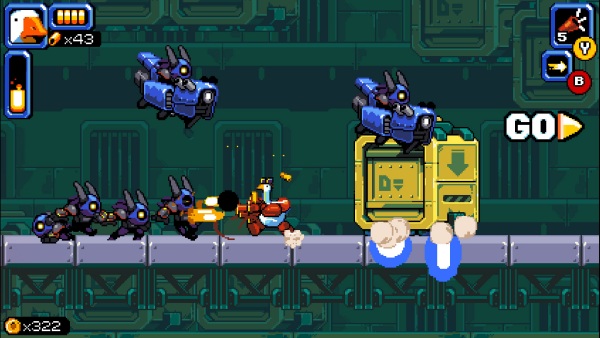 This is the tale of an awesome Bounty Hunting Goose, who ventures far and wide across the galaxy, hunting down criminals and stopping the work of the evil overlord VOID. Goose is armed, dangerous, and will honk when things go crazy. You must follow Goose on their venture through the galaxy, to save their fellow comrades, investigate strange events happening, stopping the armies of VOID where possible, and hunting down the most dangerous foes in the galaxy.

Players will take on the role of Goose, as they complete a series of missions across the galaxy. Goose will be dropped into an intergalactic prison, Massive arenas on desert planets, mining facilities on floating dwarfs and heavily fortified fortresses of VOID. The missions will see Goose rescuing POWs, saving miners from a devastating alien invasion, destroying convoys, or hunting down key players in VOID’s army. No matter the job, Goose will take it and you can expect plenty of action to follow.

Goose will have to blast their way through each level, obtaining new weapons such as machine guns, shotguns, and rocket launchers, but will also be able to pick a sidekick for the fight. Goose can also equip several different abilities that will make them stronger, faster, and more deadly when needs be. Throughout each level Goose can also acquire coins, allowing players to purchase weapons on the go if needs be. Although to be fair, the game is pretty generous with weapons and first aid for the most part.

Each level has its own over the top action set-pieces which including stopping a convey (very much inspired by the Mad Max films clearly), fighting your way through an enemy base on a fighter jet, blasting your way through alien invested caves with plenty of shotguns and fighting a giant mech in an epic showdown.

The best way to describe The Might Goose (and I have mentioned it already, but will say it again), is a loving homage to Metal Slug, just with a quirky sense of humour and a Goose for the leading role. 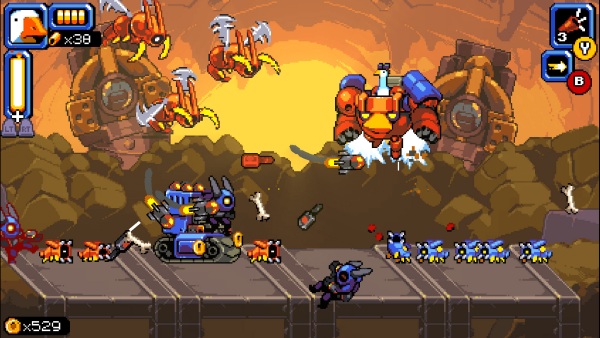 Mighty Goose has some solid and highly energetic action for a 2D side scroller. Goose will have to venture through different levels, shooting their way through hordes of enemies, from low-level goons to heavy armoured mini mechs and everything in between. The shooting feels great, with plenty of impact and visual spectacle on the screen. The action is non-stop and there was never a dull moment in which nothing exciting occurred or the pacing dropped a beat.

The action is flawless, a wonderous visual display at most times and everything from controls feel tight and responsive to the wide variety of enemies and bosses really helps The Might Goose stand out as one of the most engaging 2D actions games in a long time.

Vehicles are also a ton of fun, breaking up certain sections rather well and delivering a new perspective on the action and mayhem.

While Mighty Goose is quite linear, there were some alternative paths to be found here and there, this making repeated playthroughs a must. Plus, you can always play The Might Goose with a friend, which only heightens the action further!

The soundtrack is phenomenally good! The composer of Might Goose truly deserves all the praise for such a kickass soundtrack and hopefully be given some recognition in the awards season. I really do mean it, even the main menu theme is so awesome! 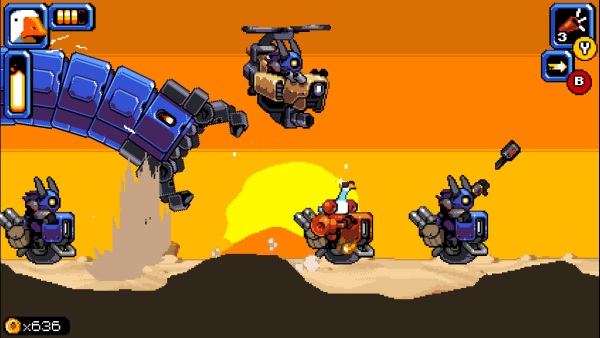 While there was nothing major which brought down Mighty Goose, there are definitely some missteps.

Firstly, the game is not long at all and for the first half, is extremely forgiving. Weapons and First Aid are plentiful and even on the mid-way boss, it is a breeze that won’t take hardened gamers long to beat. The game does change somewhat midway through, becoming a little harder, but repeats everything you have played through already.

It reminds me of what a lot of older games did in the past and repeats entire chunks of the game again to fill up the playtime. Even games not long ago release like DMC4, which saw players go through the first part of the game, only to go back through it in the second half. It’s just a bit disappointing that the second half of the game… is the first half but a bit harder. And still not that hard.

I also think there could have been more in terms of unlockables and game modes. A game like this needs extra modes as it could be short-lived with just the campaign alone.

Overall? While there are some small concerns, I can’t help but recommend Mighty Goose non-less. Mighty Goose is the crazy, fun-filled action game I’ve been waiting for, and for fans of the Metal Slug series, this is absolutely for you. And for everyone else, it is definitely worth picking up and playing. The action and spectacle is amazing, the visuals are awesome, the soundtrack one of the best this year, and yes, playing as a Goose saving the galaxy is much more fun than being an annoying Goose.

An Xbox One review key of Mighty Goose was provided by the publisher for the purpose of this review.