Bloober Team has risen through the ranks as one of the most beloved indie studios, making some of the most visceral and visually stunning horror games. But their track record is filled with many highs and some low lows. Yet with each Layers of Fear 2, there is a masterful game from them, such as Observer. In 2020, we saw the teaser for The Medium, and instantly many were very hyped about the prospect of a dual reality happening in a video game. Not since Soul Reaver, have we seen this, and Bloober Team were definitely being ambitious with the concept.

Does Bloober Team pull it off? Read on. 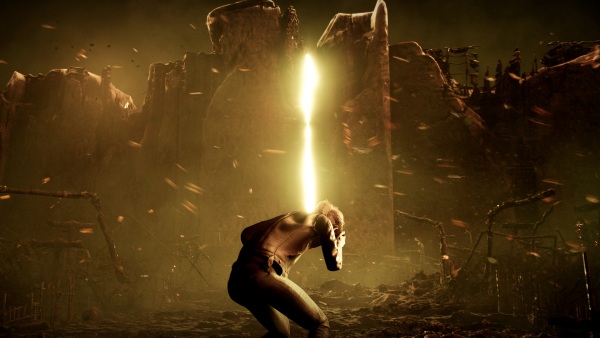 Bloober Team’s The Medium is a simple tale centered on Marianne, a young woman with an incredible gift. The gift allows her to not only communicate with the dead but to see and explore The Sprit World itself. This gift, however, has taken its toll on Marianne, and visions that haunt her frequently, have left her alone and isolated.

However, she was given a chance at a normal life thanks to her adoptive father Jack, but when he passes away, Marianne decides to follow a lead that might reveal the true nature of her gift and also her mysterious past.

Marianne receives a phone call shortly after the death of Jack and the lead brings her to the Niwa Hotel. This is a very troubled place with a bloody curdling history that Marianne must explore and relive to find answers. Soon enough, she comes across a young child trapped within the Sprit world and something insidious and so dangerous that Marianne must do everything in her power to stop it. As the night continues, more is revealed, and some troubling secrets come to light.

The Medium’s story is far from original and looking at the above overview might not spark much flare and excitement. But what I do admire about Bloober Team is their ability to take a simple concept and inject so much character, charm and depth through the art, environments, and characters themselves.

Marianne is very likable and her interactions with other characters feel genuine. She often remarks on her situation with a certain familiarity yet will react strongly to something she is unsure or afraid of. There are plenty of light moments next to the darker elements, which gives the story and overall journey a nice pace. It would have been so easy to have this as just a bleak and unsettling tale (and there are moments there), but Bloober has made sure you not only sympathise with Marianne but also enjoy her company as we spend a lot of time with her. 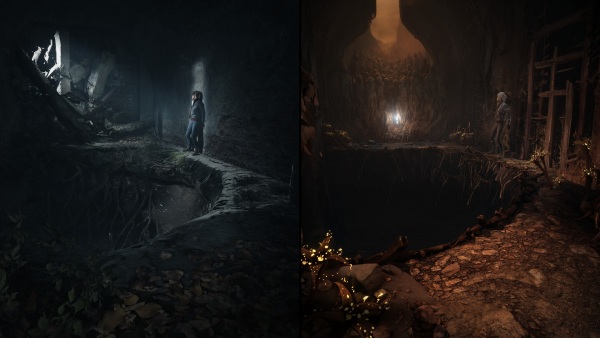 The integration of the Spirit World is a marvel in both storytelling and gameplay. It’s visually stunning and works well against the offset of the mundane and ground Niwa hotel. The supporting casework well off the story and off each other, never feeling out of place. But the stand out here is Troy Baker as the antagonising overworld guardian.

I am personally not a Troy Baker fan but its unnerving and downright disturbing voice work here is masterful. The character itself, known as The Maw, is a mixture of perverted hate and tragedy. His moments are at times short-lived, but overall, he leaves an impression that will not be shaken off any time soon.

The plot moves at a great pace, with some neat set-pieces and reveals, even if you can guess some of the major points before they happen. The Medium still manages to bring a compelling tale of otherworldly horrors made memorable by a great spirit world and a cast of interesting characters.

The Medium is not your typical survival horror game, leaving out item management and combat to focus more on an intense and enthralling venture of exploration and puzzle-solving. The Medium did in a positive way remind me of classic horror games for the 6th generation consoles. Titles such as Obscure, Forbidden Siren, Fatal Frame and even Silent Hill in some regards. There is a strong focus on exploration and solving various puzzles to progress. There are a few chase sequences and moments Marianne will need to hide from Troy Bakers fiendish Maw before it can take you over.

But the major component to The Medium and its gameplay is the dual reality and visiting the Spirit world in order to accomplish certain objectives. At times, it is random, where the screen will split into two, showing Marianne in both the real and spirit world, having to navigate the two and passing by certain obstacles. An extremely ambitious and compelling mechanic that is executed well enough.

First off, puzzle-solving and lateral elements. Now The Medium surprisingly keeps things simple, even with it’s more “complicated puzzles”. Personally, I am a whizz with puzzles and love games such as Silent Hill which offer an abundance of them in all shapes and sizes. But generally, there was nothing here that left me stumped or would properly leave too many scratching their heads. 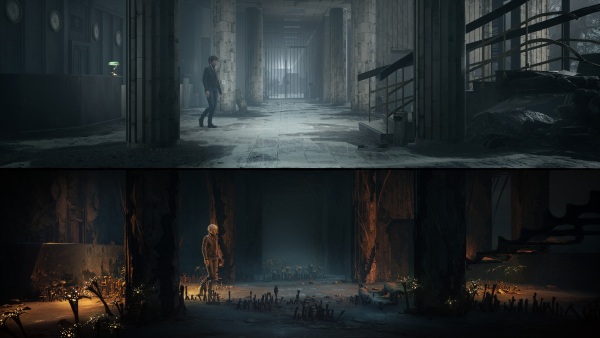 However, where The Medium shines through in some instances is where you shift between the real and Sprit world. These moments offer an interesting perspective on an otherwise, simple situation. There are some great setups such as Marianne using a clock to move memories in time to find a secret doorway. Or using a small mirror in a doll’s house to enter the spirit world and the various rooms of a burned-down house in the real world. These are the breakout moments and Bloober Team has managed to make the most of their visually mesmerising and enthralling mechanic.

I just wish we had a little more thought behind some others as clearly Bloober Team took a lot of inspiration from the Silent Hill series. But whereas Silent Hill 2 saw James Sunderland figure out the innocent man out of a room full of hanging nooses, manifestation the crime and punishment theme so well. We have in The Medium a puzzle where Marianne must work out from a bland meeting room and sitting chart the name of a spirit she needs to help. The components are there at times but never fleshed out.

But exploration comes out as much stronger, thanks to the visual style of the spirit world but also the environment itself of the Niwa hotel. This damp, decaying, and ruined place filled with misery is truly a terrifying place at times. It reminded me of the random missions in Thief, where Garrett would have to explore a creepy mansion or the infamous old asylum which housed a few nasty beasts and angry spirits. But were also dripping in atmosphere and intensity. The Medium does well with its world-building and exploring both of them is immense.

There is a course item/key finding and Marianne having a physic sense can detect hidden items or reveal fragments of the past that might hold clues on how to solve a puzzle. It’s again nothing that breaks the mold overall, but with the shift in realities and the small, but neat mechanics of channeling echoes from the past, it’s made for a pretty gripping journey that has plenty of interesting things to discover.

Run away! Run away! 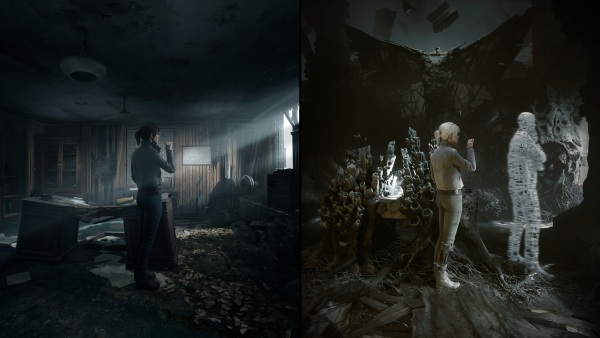 Then we get the moments where Marianne will have to run for her life to hide from the ever-fiendish Maw as it spews out disturbing remarks such as “I want to wear your skin suit” (shutters). These moments are fine and again, don’t break the mold in terms of originality, but have some great visual flair. One chase, in particular, saw Marianne running through a forest and as she did the environment shifted between the real and spirit world. This was meant to act as both a visual spectacle (which it was) and a means to literally bridge certain gaps on the path in both worlds. But there was a missed opportunity here, where Bloober could have given control to the player to switch between both and activity make the path safe for themselves. Not have it done automatically.

And I feel this is somewhat the biggest problem with The Medium. It has a great concept with the reality shift and there are moments it could’ve been pushed further, but sadly it’s played a little too safe.

But these moments of cat and mouse are tense and brutal at times. Leaving you wondering when the next moment of madness will lie with The Maw and what you have to do to pass him.

On a side note!

So speaking of the visuals some much, you’ll gage that I love what Bloober Team has done and their visions of the real and spirit world are phenomenal in many ways. The sound design and music by Akira Yamaoka and Arkadiusz Reikowski is simply beautiful. Filled with haunting melodies that really encapsulate the tension and unknown of The Medium.

The fixed cameras as well is a nice touch, adding a highly cinematic feel to the presentation and works effectively in the more frantic moments. There can be at times when the camera is too far away from an item/point of interest and when it does change, there can be a slight moment of confusion as going forward in one scene can result in you going backward in the next. It’s nothing like the tank controls of old survival games thankfully and Bloober has done a magnificent job at showing it can work surprisingly well in modern gaming.

The Medium offers one of the most refreshing and engaging gameplay mechanics in a long time, starting the new generation off with a promising lead. While Bloober could’ve fleshed out certain puzzles and the mechanic to be more interactive in certain moments, they have done an outstanding job here. The Medium is a tense and mesmerising journey, that is deeply human and absolutely unnerving at times. The visual style, atmosphere, and horror elements are downright compelling and are some of the best in any recent horror game. The story touches on so many interesting aspects that it is best to see them for yourself, with a great leading lady and supporting cast adding more to this deeply troubling venture into the unknown. This is perhaps the most ambitious and beautifully executed horror game of the last generation and makes an impact in the new one.

The Medium is definitely worth checking out and I sincerely hope Bloober Team makes a sequel or other titles with the dynamic gameplay elements they have developed.

A Steam key for The Medium was provided by the publisher for the purpose of this review.