Now for another remake! There are so many coming out of the woodwork, including Final Fantasy 7. But can’t you blame developers/publishers for doing this? Games from 20 years ago are beloved by many, but to be fair, we all secretly want to see our favourite games and films remade (but done right that is). Remember that there are quite a few successful remakes including The Thing, The Fly, the first Resident Evil remake and the second. So they’re not all bad. But when Capcom announced they were remaking Resident Evil 3, there was a collective gathering of gasps and concerns.

I mean, it was only just a year ago when the fantastic Resident Evil 2 remake came out. So many were a little worried that this was coming in too soon. But Resident Evil 3 has been in the making for a few years now and so, it seems like Capcom know what they’re doing. But dare I ask if this remake is coming out at the right time (considering many are in self-isolation) or should it have been left in the oven a bit longer? 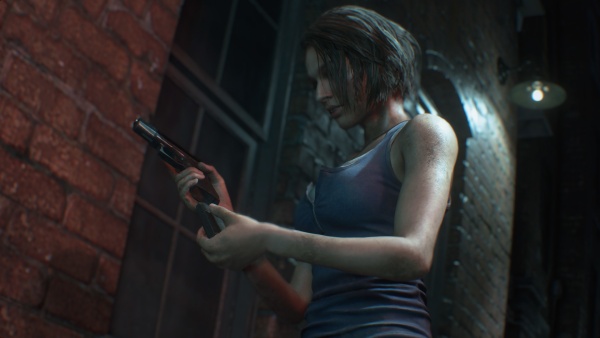 So for those who don’t know, Resident Evil 3 is set before, during and slightly after the events of Resident Evil 2. You play as Jill Valentine, a hardened member of S.T.A.R.S (Special Tactics and rescue service) and one of the leads from the original Resident Evil. She is investigating the Umbrella cooperation for their wrongdoings with the T-Virus, however things are disrupted when Racoon city is overrun by zombies and other abominations.

Jill must team up with a few remaining survivors and escape the city before it’s wiped off the face of the planet. However, things won’t be easy with said zombies, other creatures and of course, the brute that is Nemesis. Who is hunting down Jill throughout the city and will not give up his deadly pursuit.

Now the story is fairly straightforward with little complexity in the narrative. But compared to the original source material, this remake does flesh out the leading lady and supporting cast, while adding much more depth to the world itself. The history of many of these monsters is explored further and its overall a collective of fantastic Resident Evil lore. The pacing is pretty good and the string of events is all very interesting and compelling.

Voice acting and cinematics are excellent with plenty of flare to make everything feel like a big-budget movie! Facial animations are great once again, even though there were some moments which looks a little off, as though the expressions were underwhelming considering some of the things seen by these characters.

Namely Jill’s reaction to being grabbed by a strange creature and having maggots stuffed down her throat. However, everything else about the presentation is really great, with the visuals being beautifully detailed and the atmosphere leaning towards ultra-creepy levels. Namely, the hospital showing off everything you should about the presentation. 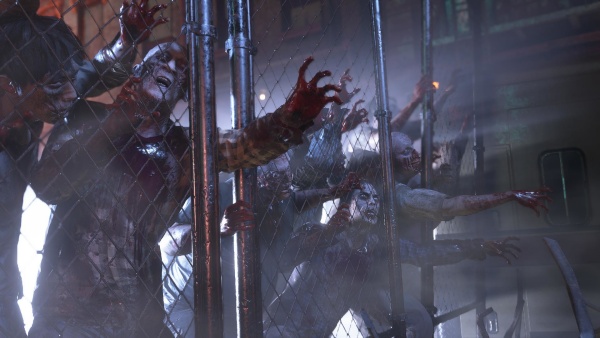 Now Resident Evil 3 follows plenty of the same mechanical beats as of last year’s Resident Evil 2 remake. It’s over the shoulder but still manages to give a good balance of tension and stress with a mixture of action and horror. Resident Evil 3 gives players plenty of thrills in environments littered with the undead, while tasking them to find key items and solving puzzles in order to progress. There’s plenty of resource management as players will need to find ammo and health, but balance their findings with a limit inventory space. There will be plenty of backtracking as you solve simple puzzles, evading or battling numerous foes and keeping a watchful eye on what is creeping around the corner.

It’s overall pretty solid but Resident Evil 3 makes a few changes compared to last year’s remake. There are no defense items anymore and instead, players have dodge ability instead. The dodge is simple enough to execute but requires good timing for it to work. However if you dodge at the right time, you get a small window of opportunity where they can deal extra damage to the enemy they evaded. This came in pretty useful and it doesn’t require any items to pull off. It’s a little more action-focused but this fits in with the more, action feel of the game.

There are of course plenty of scares, but Resident Evil 3 does indeed add more elements to ramp up the action. Red barrels are littered everywhere to cause damage to massive groups of zombies. You get your hands on a grenade launcher now which comes with devastating ammo. There is a greater number of enemies now, making things rather more intense, but again, if you’re low on ammo, the dodge maneuver comes in handy. 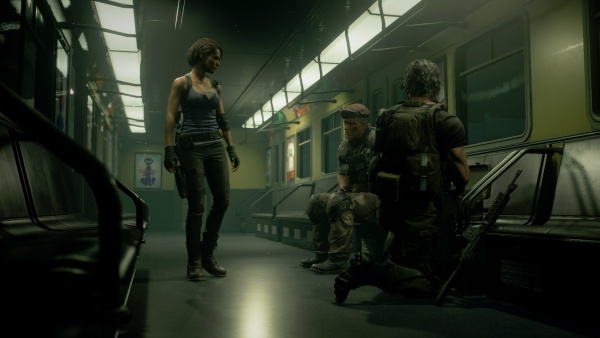 Another note to add is that there is actual music in the game and it’s excellent! The remixes of tracks from the original game are great and one nice touch was the inclusion of the remixed version of the Resident Evil 2 save room music when you go into the RPD.
One of the things which is a shame is the downgrade to the gore system. Resident Evil 2 had an immense gore system that allowed you to tactically bypass zombies by shooting off limbs. Here, that has been removed and instead zombies act more like generic NPCs that soak up bullets. You can shoot off the odd arm and blast apart a zombies head, yet it’s considerably less effective than what Resident Evil 2 brought us.

While the boss battles are massively improved and are a ton of fun! This remake does rely a little too much on action and this effects the pacing in the second act. This also affects Nemesis, who is pretty intimidating at first, soon becomes nothing more than a series of boss battles. In the original game, he did a fair bit of stalking throughout the game, until the end. Here, he appears at the start straight off the bat and comes into play quite a bit for the first act. But then he disappears and only comes back for a number of boss battles.
It’s a shame as Nemesis could’ve been more effective and paced out a little better, as he comes and goes pretty quickly.

Now I can firmly say that this much more a reimagining that a full-blown remake. Resident Evil 2 while incorporating some small changes at least kept the structure of the source material mostly the same. Resident Evil 3 is pulling some dramatic changes it the story’s structure and placement of events. I will be honest that some loyal fans won’t be happy as there are plenty of changes including how certain characters meet their demise and how some areas are completely cut.
Now Nemesis, as mentioned previously, is a bit of a problem as he comes and goes too quickly. He had potential to be a greater force to be reckoned with but instead comes in and goes out a little too quickly. The other issues which can be a problem for many, including loyal fans is the cutting of entire areas.

I personally didn’t like the Park area or the Grave Digger (giant worm boss from the original game) boss battle as these felt like padding. So cutting them out is fine by me, but there are other areas such as the Clock Tower, which are hugely reduced into nothing more than a boss arena. This was hugely disappointing. Mainly because the Clock Tower area is iconic in the original game, but the developers could’ve updated this area to be incredible.

Why I feel like this is mainly because the hospital, which has been recreated and made into something amazing. The environment is creepy, well designed, paced and has plenty of action and scares to keep you on your toes! It looked good and just shows the strengths of this remake. The downtown area and sewer level are also really good. So cutting the Clock Tower was disappointing as it could’ve been amazing. I was also not a fan of Carlos being in the RPD as this area should’ve been for Jill really. 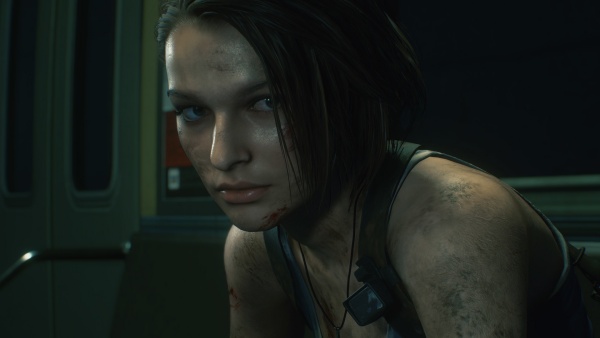 Resident Evil 3 remake is a relentless beast of a game and is much more furious than other survival horrors on the market. Resident Evil 2 was a slow burner and this remake is much more aggressive in nature. This means you’ll be entertained throughout, even if the game has the potential to pass you by. Yes, the length is fairly short but then again, many Resident Evil games are. One thing which does make this game feel shorter than others is the lack of puzzles and also there is only one main area you can explore and backtrack in. If there were more puzzles and another area like Downtown, then it would feel much more substantial.

There are plenty of reasons to play again, including a new difficulty mode which reshuffles everything including items and enemies. There are a few unlockable items to use in your next play-through and of course models and artwork to unlock. There’s enough here and in my multiple playthroughs, I’ve racked up about 24 hours in total playtime. That’s only with the single-player campaign. I will admit that I hope Capcom will release some more costumes, extra stuff to unlock and maybe (this is a big ask) a mercenaries mode as what was featured in the original Resident Evil 3.

This is a fine remake, overall a pretty good game. There’s a solid campaign filled with scares, action and thrills and plenty of love and care when recreating areas such as the hospital, enemies and even the Nemesis is great when he shows up. Fans will be excited to see all the references from the original games and of course, there are plenty of unlockable items to get, extending the game time overall.

But cutting out entire areas that are iconic, the pacing in the second act being a little choppy and the lack of additional modes such as mercenaries mode is disappointing. I hope Capcom add in some extra stuff as a thank you to fans (they did with Resident Evil 2) to give this a longer life but what we get is pretty damn good regardless.

++ Intense, brutal and satisfying gameplay
+ Looks and sounds great!
+ Fun boss battles and set pieces
-- Some areas have been cut or reduced
- Nemesis is paced out thinly at times
- Needs more additional modes such as Mercenaries