So we have yet another 90’s inspired shooter that paying homage to one of the grand daddies of the FPS genre. But while these games are coming out woodwork every other week, I usually have a soft spot in seeing people develop games that were iconic in my childhood. There being so many amazing FPS titles in my childhood such as Doom, Duke Nukem, Unreal and of course, Quake! Well speaking of Quake, it seems this is the chosen game to inspire our latest call back to a simpler and more blood thirsty time. Welcome onto the stage Wrath: Aeon of Ruin. 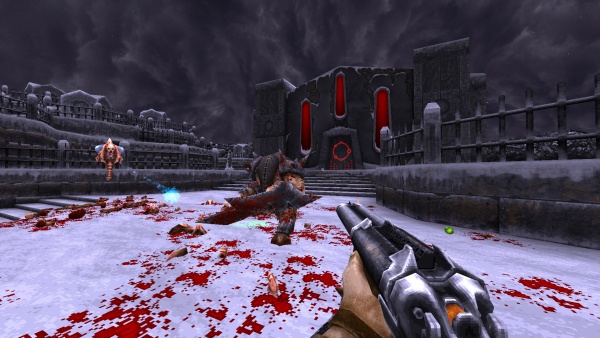 So we had games like Dusk which was an homage to Redneck Rampage, Ion Fury which was namely honouring the late and great Duke Nukem (more so Duke Nukem 3D) and now we have Wrath being the new Quake.

The story is pretty much resembles a classic 90’s shooter with all the cool names, terrifying places you’ll be venturing too and all the vile scumbags you’ll be shooting in the face! Don’t believe me, read the story description below taken from the Steam page -
“You are Outlander. Once adrift upon the Ageless Sea, you now find yourself on the shores of a dying world. From the consuming darkness emerges a figure cloaked in white, the Shepherd of Wayward Souls, who burdens you with the task of hunting down the remaining Guardians of the Old World. You must journey into the vast gloom to explore ancient ruins, discover forgotten secrets and battle the horrors that lurk within.”

Damn, this is sounding seriously gothic and I love it! So yeah you’re this individual known as Outlander or “The” Outlander, I’m not too sure. He’s trapped in a hellish place and all there is to do is shoot things in the face and find the source of misery, so you can shoot it in the face I assume. Now Wrath is powered by the original Quake engine and made by a development team that actually work on some expansion packs for the original game.

So right off the bat you know we’re in good hands and all I can really say is so far, what they’ve done is stellar work.
Wrath presents a small hub world for players to wonder around in and in this build of the game, there are only two areas unlocked. But there are plenty more to come, each having unique environments, enemies and weapons. The goal is to find a number of important objects and well that’s all for now really. Until the next levels are released. 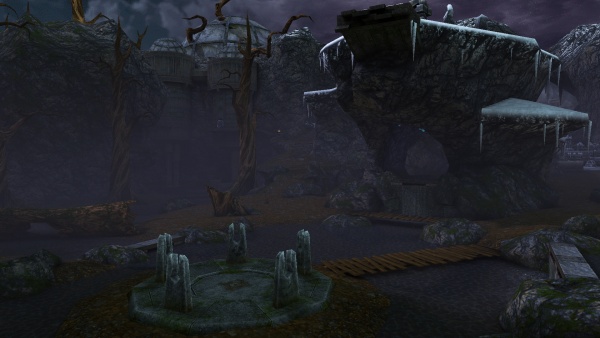 Firstly Wrath nails the aesthetics which made Quake so recognisable and iconic in the 90’s. looking and sounding the part of a perfect imitation of Quake but grander in scale and design. While Quake’s world was often a confined and claustrophobic one, the environments in Wrath are surprisingly much larger yet keeps that bone chilling atmosphere and feel of isolation in check. Everything looks wonderfully gothic and cold, with sprawling landscapes in the backdrop, a nice use of altering terranes making the environment feel more organic and a lovingly crafted series of castles, dungeons and crypts which house of pretty sick nasties.

No not video nasties but rather hellish goons who want to murder your face into oblivion. So you got your basic bottom feeders who move slow but in packs can do some damage (if you’re really unlucky), those who move really fast and scream like someone is waxing them (badly), these dudes with shotguns known as Invaders and then you sick looking guys with boils and cysts all over their bodies. They spew some lovely looking bile while having the nerve to ozze all over you. Just to say cysts and boils are bad! Then there are the bigger enemies who seem like every day is a bad day for them and in return want you to be punished. I love the old school look of these enemies as it reminded me perfectly of low polygon textured monsters who looked super creepy and inhuman, like in the old Resident Evil games. People who like this as much as I do will instantly love the creature design. There’s a nice mixture of enemies and they’re a blast to …. Well blast apart! Some of the larger enemies, including this giant cyst covered frog (yeah interesting boil/cyst theme going on) that have ridiculous attacks which made me grind me teeth a little. But more on that later. 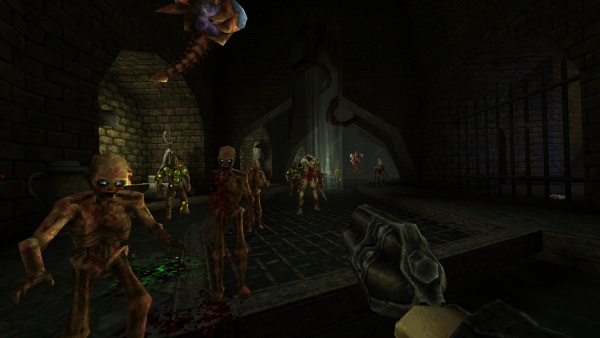 Aside from ghoulish goons, there is an sweet arrangement of guns with awesome sounding names. You’ll start off with a wrist mounted blade that slices and dices very nicely, but with its secondary attack also acts a means to traverse certain areas and find secrets.

Then you get a three barrel revolver, works well as a backup gun and is good for long ranged shots. Then you get a neat double barrel shotgun which sounds amazing when it’s fired. Then in the third slot you usually find something like a heavy machine gun or mini gun (like in Doom) and here we have the fang mini gun! (it has another name but it’s pretty much a mini gun that shoots fangs!) It’s a meaty bit of kit that launches fangs at enemies and lastly we have what can be described as an cyst launcher, which fires the same goo as the boil covered enemies do. This is massively powerful and a lot of fun to use. That said, all the guns are a lot of fun to use and throughout my play through, were all useful in many ways and in different situations. In close combat situations the shot gun and fang launcher were good for crowd control whereas the acid launcher and pistol were good for taking out enemies from afar.

Now players will be able to explore and discover neat things like ammo and also power ups that allow the player to drain health from enemies or make these checkpoints in between the start and end of the level. An interesting idea as you can plant your own checkpoint but don’t worry there are actual checkpoints in the game but they’re far and few between.
Now the only things I can say that need some improving are as follows. 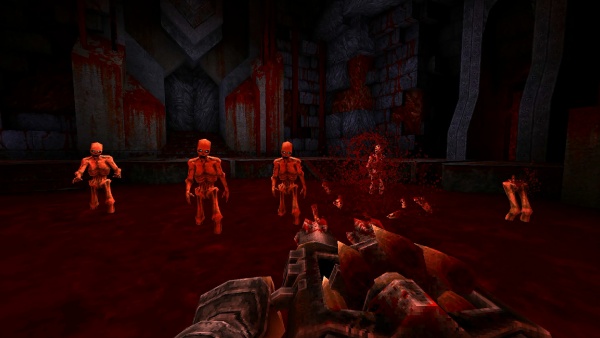 First some of the bigger enemies are way too powerful or over powered for what they can do. (As I mentioned before)Their rates of attacks are ridiculous and need to be toned down slightly. Especially when the giant frog things I spoke about earlier, are position half way across an arena, yet manage to pull of some amazing and precise ranged attacks that can end you in seconds.

Second, the game is a little too easy, despite me saying some enemies are really tough. I don’t think the difficulties here should be tweaked per say, but maybe add in an ultra-hard mode, harder than the ultra-hard mode you got here already. Medium is a cake walk once you understand the enemy’s patterns and behaviours or if you don’t mind backtracking then you can always find a spare health potion. But even on hard there’s plenty of resources such as health to make sure you’ll stay on your feet.

But it’s tricky as there’s no regenerating health (even to say 25%) and the game can be difficult for those not used to the old school style of shooters. But if you’re a quick learner or an oldie like me, then it’s no big deal. I think it should be the developers can make hard mode and above a lot harder if you ask me.

But aside from these nit-picks I’d say that Wrath: Aeon of Ruin has made a damn good impression so far. It has some neat mechanics with its save system and like Ion Fury, take the engine for everything it’s got by creating a compelling and grand world filled with all manner of horrors you can butcher.

Wrath: Aeon of Ruin is in early access and we should hopefully see some new content soon!