Metroidvania, the sub-genre of action/adventure has made a glorious comeback in recent years with games such as Hollow Knight, Dead Cells and Bloodstained keeping the interest well and truly alive. While there are plenty of titles on the market, it seems like many are really hit or miss. Some games nail the structure, pacing and all the refined gameplay elements which make a Metroidvania game while others don’t. Bookbound Brigade is the most recent in the sub-genre and today I will see if it’s in the hit or miss pile.

Bookbound Brigade has a simple enough setup with a legendary book that keeps balance in the literature world having been stolen. The book is found but many of the pages are missing, so it’s up to a small band of heroes plucked from the greatest literature including Dracula (wait a moment), King Arthur, Robin Hood and for some reason, Queen Elizabeth, to save the day. Everything seems straight forward enough as the heroes manage to track down some of the missing pages, but soon enough they discover multiple realms fashioned on some of the greatest books ever written, to have the remaining pages. Worse still, some of the greatest villains conceived onto paper are also running amuck.

Now I quite like the idea of having some of the greatest figures from literature be the center of the game and the playable characters. Plus the choice in villains is rather cool, like Moby dick, Medusa and many others. How the game works is that you have a small group of heroes at one time and they work together to battle evil, solve puzzles and save the day. There are quite a few characters to unlock and a ton to find and have at your base of operations (basically acting as side quest givers). But my issue is nothing interesting is done with them. Yes, they each have a personality, some more so than others, but they all act the same. Sure most of them will acquire a special skill that does come in handy, but it feels very one-note. I thought maybe switching between each of the heroes might have lent better towards more dynamic situations. Just what we get is a bumbling group of heroes who act the same as each other and don’t really stand out.
Another Metroidvania game like The Cave manages to gather an interesting set of characters that have their own skills and perks, plus you choose them to venture off and explore. But you might come across locked areas and loot which requires another character. It’s a good way to add replay-ability and make sure each character feels as though they have a purpose. 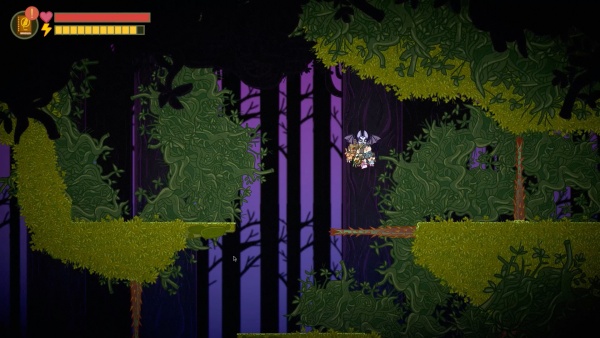 Visually speaking, this is a very nice looking game, with a ton of personality, colour, and imagination. Each world represents a great story and it’s brought to life by a team of amazing artists. Sadly the world’s design is a slight problem. Everything seems to be fine at first if not a little linear. But as soon as branching paths come into play, the game decides to make things really confusing with the world’s layout. Even with a map, it’s easy to get lost or lose track of what/where you’re going. Basically, the worlds are too big and there are even multiple layers to them, so you can be in the same area but on the other side of it (if that makes sense).

You can go on for miles and forget where you’re going to travel so far to meet a dead end. Bloodstain managed to create a beautifully designed world that was simple yet had multiple layers, clear separation and a means to fast travel. Like any good Metroidvania game, there have to be shortcuts or fast travel. There must be a clear separation of areas and when you design levels, don’t make too many straight paths that break off in multiple directions. Shadow Complex had multiple areas but kept them confined and into massive blocks. The longer paths had short cuts so meaning you didn’t have to go back and forth to each end to get somewhere. Bloodstained and Castlevania do this as well. Bookbound Brigade just feels needlessly long, confusing and just tedious to travel through.

Everything is here, such as backtracking to obtaining rewards you once passed and can now receive as you’ve obtained a certain power. But doing so the scale of the maps means backtracking is even more tedious than what it should be. 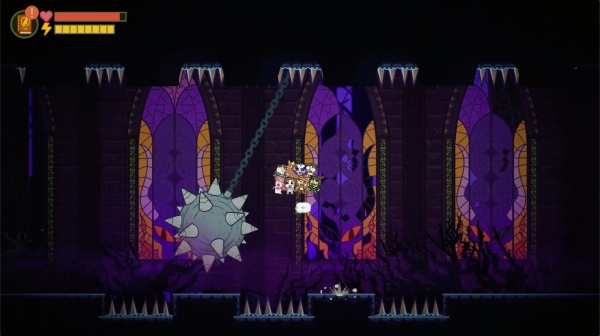 As for everything else, there are the classic elements here such as exploration (which concluded in my previous comments as not being well-executed), lateral elements and combat. While the puzzles aren’t any particularly great, they’re fine and never outstay their welcome. Combat, on the other hand, is a chore. Other games manage to build and developer combat, offering multiple choices in how to engage an enemy. Bookbound Brigade keeps things very simple (and this is not a bad thing) but doesn’t give you enough tools or opportunities to fight back. Early on it was clear that many enemies could not be fought head-on as they were clearly overpowered, but I found that there was little in tactics or even evasion that would help out.

I found myself taking a massive amount of damage most times with bigger enemies as the attacks on offer were just pathetic. Even using a tactic such as lunging smaller enemies at them would mean taking damage as there were usually two or even three larger enemies on screen and not enough to resources to take care of all of them in one go. I found myself being attacked or worse still, poisoned because the game didn’t give me enough tools or resources to handle the situation accordingly. Worse, this game would be way too difficult for young children. 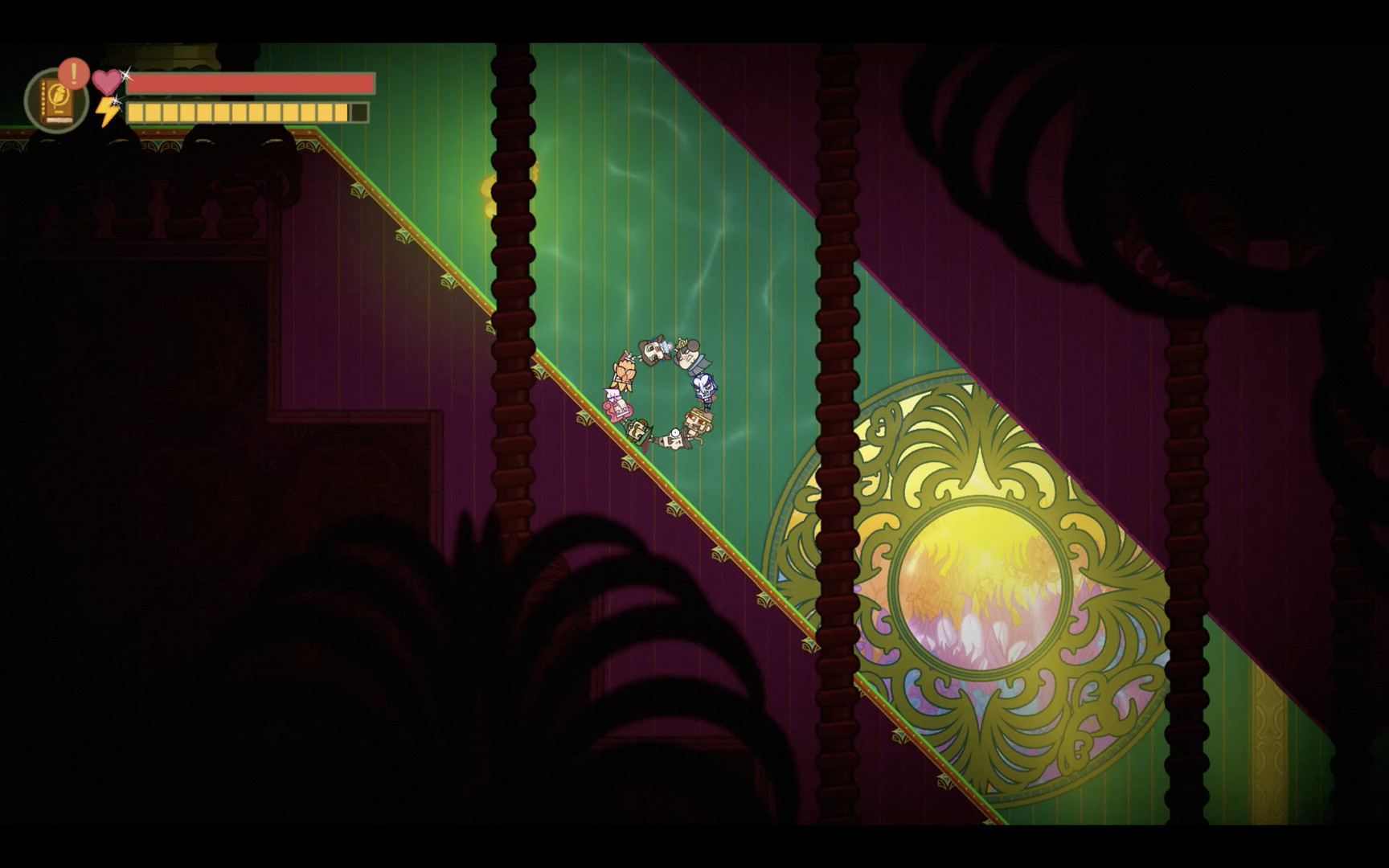 The platforming managed to infuriate me as it requires pixel-perfect movement to avoid any of the many hazards on screen. Walking through death trap infested corridors meant multiple retries as my characters met a pixel or two of said death trap. Such as a moment that sees players avoiding multiple walls of fire and having to pass by them all in one go. Making a mistake here meant having to do this area all over again.

Yeah, the platforming is not great but rather a cheap and uninventive excuse to prolong an already long game.

So Bookbound Brigade is quite a let-down considering the promising concept. So the style, concept and general writing for each of the characters are pretty good, with some neat set pieces and boss battles in the mix. But the developers seem to be a little rusty when it comes to designing a Metroidvania game, as the world is too large and confusing with bland combat and tedious platforming. It’s okay overall but for those who’ve played plenty of Metrodivanias like me, then this won’t scratch that itch you have for wanting more. As a kid's game, it’s okay but the difficulty would be a little overwhelming for them.

A PS4 review copy of Bookbound Brigade was provided by the publisher for the purpose of this review.