Video Games like Inside and Stella have given us simple yet powerful and provocative experiences that anyone can engage with and enjoy. While some elements are really subjective, I personally felt both these titles and others like them offer an enriching journey of discovery, interwoven with interesting themes. The 7th Sector is hoping to join that line-up.

The 7th Sector is the next hopeful when it comes to the provocative, high art inspired sub-genre of platforming/action-adventure games. It appears to have all the right elements and I was pretty interested to see if this could be an early hit for 2020.

The 7th Sector takes players into a mysterious and rather merciless cyberpunk inspired world, which feels like a mixture of 1984 and V for Vendetta with a cyberpunk wrapping. By this I mean there’s an overwhelming sense of dread most times, with people living in gut-wrenching poverty within a ruthless and cruel totalitarianism state that offers very little in terms of joy or hope. People make do with each other’s company and the small things which end up meaning a lot. I know this sounds a little pretentious but I was genuinely impressed with the game’s world-building and atmosphere. How small bits of information is being fed to you without much glare and attention, meaning you soak up what’s around you without fully understanding it at first. But you may never fully understand the story of this world but rather just observe it in a highly organic manner.

But this is what Inside, Stela, and others have done before and when done well, can result in a highly immersive journey. Learning about the world just enough so that you can fear it and contemplate why you do.

You observe all of this as you take on the role of the “Anomaly” which is represented by a mysterious spark of energy or at times a shadowy figure within television screens. We are again given no information on what this “character” is or why they’re there, to begin with. You just exist with the aim of venturing forth to an unknown destination to fulfill an unknown goal. I can understand that this type of storytelling is very verge and some people may not like it. I get it, I really do. Being placed in a body of a character you know nothing about and going with the flow to an unknown destination without context can be jarring. But it’s about the journey and if you like this kind of thing, the symbolism that comes with it. INSIDE has a very symbolic ending that people either loved or hated, but it was still a compelling and meaningful end. The 7th Sector does something similar but I feel plays it safe. I won’t speak any further than that but I will say the journey is truly captivating regardless if you like this form of storytelling or not. 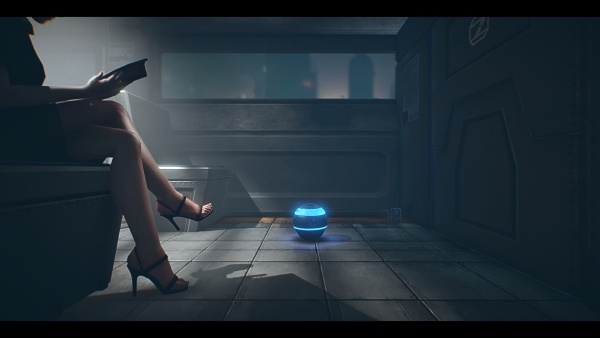 As you may expect the gameplay is about platforming and puzzle-solving, with some light elements of combat. There is an interesting variation to the traversal side of gameplay, with players taking on a number of roles in the game. Players start off as a spark of energy that is limited to traveling through a series of wires and cables. You can switch between various cables if they’re near each other but overall your movement is restricted. Until you gain the ability to possess various objectives in the environment, such as electrical boxes, certain machinery, and even toy cars. This allows you to move a little more freely and solve more complex puzzles. As you progress through the journey you’ll possess much larger and more complex machines that have their own abilities.

I did like the whole idea of traversing through each environment via wires/cables and having the power to possess various items in the environment. It added another layer to traversal but also implemented it into the lateral side of the gameplay. This does go out the window in the second half and you’ll be restricted to a couple of machines for the remainder of the game. It would’ve been much more interesting to be able to switch or go from one machine to another, in order to solve puzzles, explore and just in general keep in touch with the more interesting gameplay mechanic.

It’s fine, as the second half of the game presents interesting challenges and all, but there’s a weird sense of pacing on what you possess. You take control of a tank like a robot than a flying drone and (actually I won’t spoil it) throughout the second half of the campaign. It felt a little jumbled and by the end, it doesn’t feel like a natural progression from spark to something more powerful. But overall its fine and the journey is vastly interesting. But subjectively I would’ve liked to see more complex gameplay mechanics, where you can change from machine to machine freely. 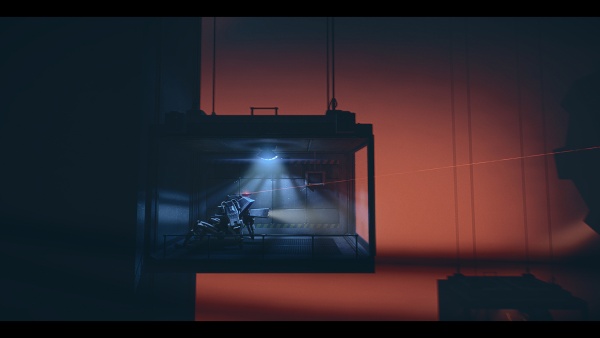 In terms of puzzles, they’re really a mixed bag. Some puzzles are very good, well thought out and laid for the player to engage with and others are just without context or logic. There were puzzles that gave you clues or items in the environment to interact with but then basically had the simplest resolution possible. This meaning you don’t need to conduct a series of thoughts to come to a logical conclusion and thus sucking out the fun of solving it. It feels like trolling at times or having to go at random to discover the solution. This could be enjoyable to some and it’s all about solving the problem at hand. But to confuse and push people the wrong way is a little immature when it comes to game design.

Now some puzzles do require a very keen eye or intense sweep for clues. It’s easy to miss them and then there are items you can interact with which have absolutely no purposes. These types of moments only happened a couple of times throughout the campaign but these moments could literally break some gamers and turn them away. I think the best puzzles occurred on the train level and the underground lab. These puzzles were interesting, played with mechanics (which aren’t seen later in the game) and had plenty of clues to help you resolve them.

The 7th Sector also does a lackluster job with its combat and overall it’s not really needed. Inside, Limbo and Stela all had some form of combat but these were more a battle of wits. There are perfect moments for the 7th Sector to do this but refuse to carry them out. Like a moment where the player, as a small ball, is being chased by a walking tank. At the very beginning, there’s an option to drop a storage container, possibly hinting at how to win the battle. But it’s completely random, it serves no purpose. It’s just a tedious chase sequence that really has no payoff. 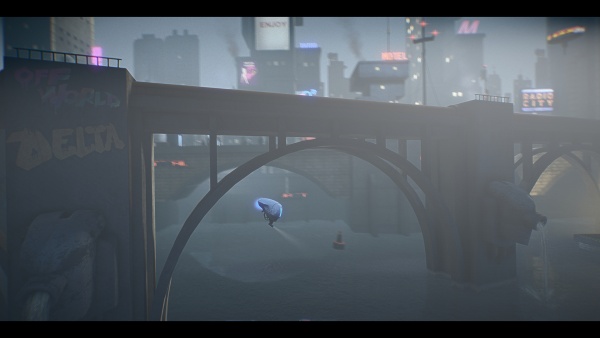 When you control one of these walking tanks, it’s not a bad series of events but then you have to engage in combat and it’s a case of “misstep and you might as well start over”. You have to basically shoot enemies off-screen to gain a small advantage as they seem to be massively overpowered compared to you.

But again these are small segments which don’t last that long and there are other moments which are much grander. For example, a puzzle in the underground lab was a perfect mix of environmental storytelling and lateral thinking, showing off cells with people inside them and having to figure out the door code by working out a simple maths problem. Towards the end of the game, you take control of a flying drone and within a complex maze of air ducts, you’re being chased by a more advanced and deadly drone. This was a thrilling cat and mouse segment that really held a lot of intensity and had a really good payoff.

Despite the small hiccups with some annoying puzzles, difficulty spikes, and lackluster combat, The 7th Sector is still an enthralling journey to take part in. Is it as good as INSIDE? Sadly it’s not, but still a rather enjoyable and interesting game none the less. The 7th Sector has some very good lateral elements, made even better when it mixes them up with the environmental storytelling, a beautiful and compelling world to explore and overall and interesting format to exploration and traversing.